Not only is CHRISTMAS BLOODY CHRISTMAS a clear homage to the 1984 killer-Santa opus SILENT NIGHT, DEADLY NIGHT, but writer/director Joe Begos revealed at his movie’s East Coast Premiere at the Brooklyn Horror Film Festival that it grew out of an official SILENT NIGHT remake he once pitched. He ultimately made this incarnation his own by grafting on a tribute to a genre hit that opened two weeks earlier in ’84: James Cameron’s original THE TERMINATOR. The result is a snowy splatterfest that will very likely become a perennial among fans of Yuletide terror everywhere.

No small credit for that must go to Begos’ leading lady: Riley Dandy, a young actress who has three Christmas romantic comedies under her belt but makes it clear here that she was born to lead much less frothy fare. She plays Tori, owner of a small-town vinyl-and-VHS store who’s got attitude and a mouth on her, and assorted pop-culture obsessions. Yet unlike many such characters we’ve seen, she’s thoroughly winning, and her boundless, spunky energy has us on her side right away (even if she has lousy taste in horror sequels…). Dandy shares great sparky banter with Sam Delich as Tori’s employee Robbie, as they debate music, her potential hookup and other subjects as they close up her shop on Christmas Eve and head over to a neighboring toy store where a couple of friends work. 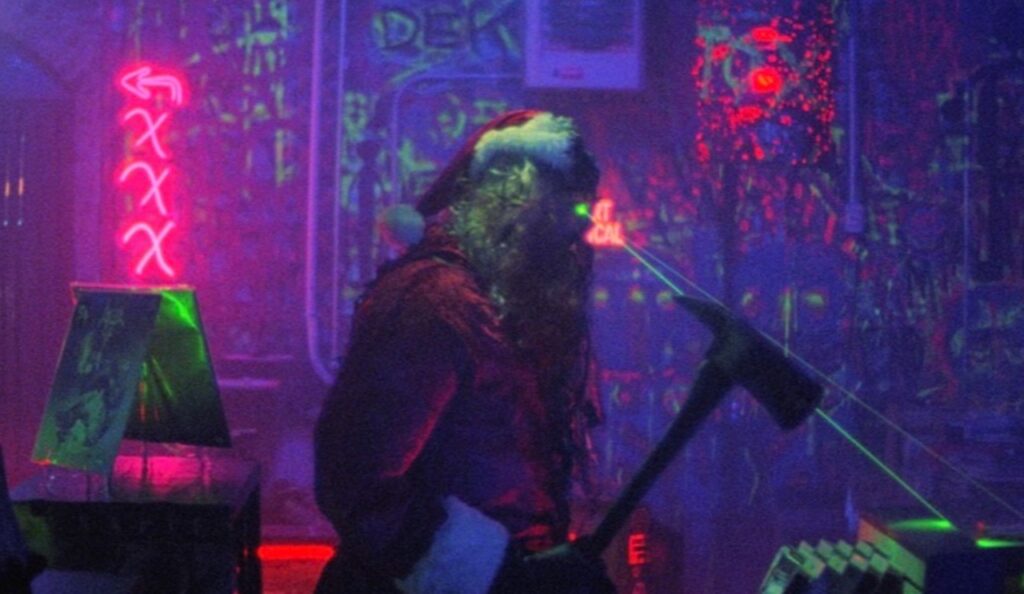 Unfortunately for all involved, the latter business’ attractions include the RoboSanta+, an animatronic Kris Kringle that “replaces your local degenerate mall Santa,” according to one of several fun recreations of vintage cable-TV commercials that open CHRISTMAS BLOODY CHRISTMAS. (Indeed, until Tinder is brought up, you might think the movie is set in the ’80s too.) RoboSanta+ was adapted from a military project, and the characters really should have paid closer attention to that news broadcast reporting that they’re all being recalled because they’re “reverting to their Defense Department firmware.” In other words, this particular red-suited robot comes to life and, properly represented at first by a heavy-stomping POV, picks up a fire ax and begins chopping.

Everything about the way Begos and co. present the scenario, in fact, fits their tribute to bygone genre fare to a T. Shooting in grainy, garish 16mm, cinematographer Brian Sowell saturates the frame with red and green and neon, his images backed by a Tangerine Dream-esque score by synth specialist Steve Moore (THE GUEST, MAYHEM and a few previous Begos pictures). They create the perfect visual and sonic atmosphere through which RoboSanta+ (Abraham Benrubi) strides and slaughters, impervious to whatever weaponry the suburban residents and cops can wield against him. For reasons the movie doesn’t explain and doesn’t need to, Tori becomes a sort of homing beacon for the seasonal cyborg, who cuts a fearsome presence with very little dialogue, beyond the occasional preprogrammed “Ho ho ho, merry Christmas!”

The first hour or so of CHRISTMAS BLOODY CHRISTMAS offers bloody shocks, some sexytime between Tori and Robbie and a healthy amount of black humor. A good deal of the latter comes courtesy of Begos regulars Jeremy Gardner, an especially amusing Graham Skipper, CHRISTMAS producer/editor Josh Ethier and Begos himself, plus Jonah Ray and Jeff Daniel Phillips. Not many of them are left by the time the movie really gets cooking, which is in the extended final act when RoboSanta+ sets off inexorably after Tori, who has no one to protect her and must depend on what prove to be some well-honed survival instincts. Covered in blood, Dendy proves as ferocious in these latter sequences as she is frisky in the earlier ones, as Tori soldiers on no matter injuries she suffers.

Speaking of which, it’s not really giving much away to note that Tori is able to give as hard as she gets at certain points, and it’s when RoboSanta+ sustains serious damage that effects creators Josh and Sierra Russell truly get a chance to shine. Following their sterling work on the new HELLRAISER’s Cenobites (and lots of other previous credits), CHRISTMAS BLOODY CHRISTMAS demonstrates once again that they’re MVPs in the special makeup/creature creation field. They, the rest of the artisans and cast Begos has assembled and Begos himself have delivered an intense and thrilling holiday treat with CHRISTMAS BLOODY CHRISTMAS (which sees theatrical and Shudder release December 9), on a budget no doubt significantly lower than not just that of THE TERMINATOR, but that of SILENT NIGHT, DEADLY NIGHT as well.