Album Boxed Set Review: Voïvod’s “FORGOTTEN IN SPACE” is out of this world

Four decades in, Canadian metal legends Voïvod are still going strong, despite a few lineup changes along the way. In fact, their latest record, SYNCHRO ANARCHY (2022; Century Media), is among the strongest they’ve ever recorded. However, people tend to forget that way before bands like Anvil, Annihilator, Sacrifice, Razor, Gorguts, Cryptopsy, Strapping Young Lad, Despised Icon, Ion Dissonance and 3 Inches of Blood, Voïvod was the very first Canadian metal band to be signed outside its own country and to tour the planet. Also, in addition to their scary, sci-fi-esque, post-nuclear-inspired narrative, Voïvod was/is probably the sole thrash metal of its era to fuse progressive elements (think King Crimson) to their already eclectic blend of UK-inspired melodies (punk meets classic NWOBHM, with a dash of odd rock like Killing Joke’s).

After the release of their first record (WAR AND PAIN, 1984, Metal Blade Records), the quartet—drummer Michel “Away” Langevin, singer Denis “Snake” Bélanger, bassist Jean-Yves “Blacky” Thériault and guitarist Denis “Piggy” D’Amour—got signed to German label Noise Records (Celtic Frost, Helloween, Kreator, Motörhead), to put out a trio of records being reissued today as part of the remastered boxed set FORGOTTEN IN SPACE, now available on both vinyl and CD via BMG/Noise. 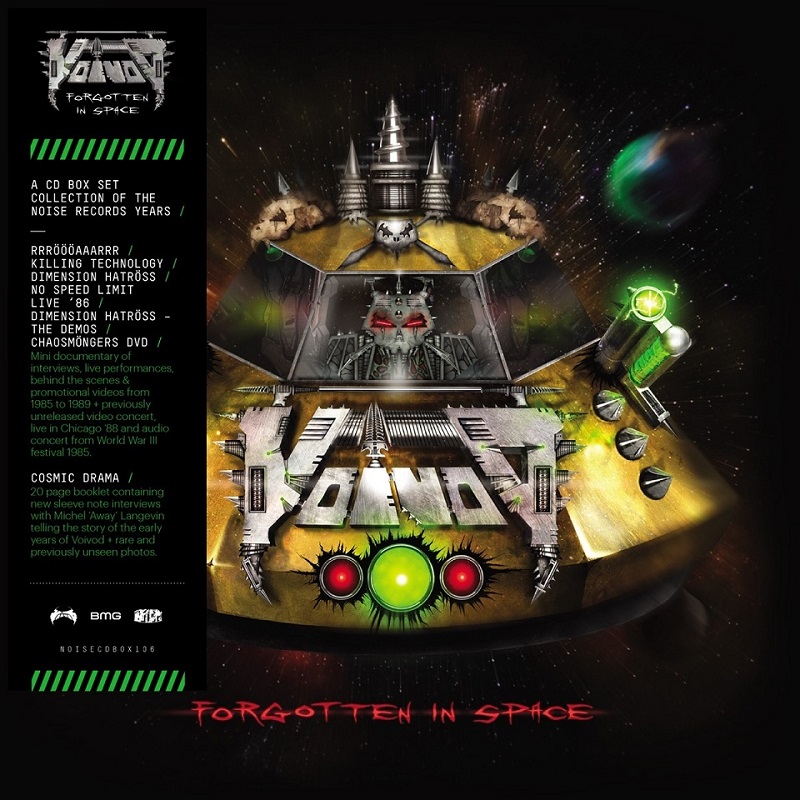 What’s in the box??? We’re talking about 1986’s RRRÖÖÖAAARRR, 1987’s KILLING TECHNOLOGY and 1988’s DIMENSION HATRÖSS (the latter two recorded in Berlin). The set also includes DIMENSION HATRÖSS–THE DEMOS and the live NO SPEED LIMIT ’86 (a legendary Montreal two-night festival where the band played with the likes of D.R.I. and Possessed). The latter is pressed on a gorgeous green-and-black-splatter double vinyl housed inside a nice gatefold LP, while the other four are on single splatter-or-swirl-colored records. And from the get-go, we have to say that thing—yes, named after a KILLING TECHNOLOGY song—is a true work of art. (FYI: Though we’re covering the LP box set here, the CD set looks nice too!)

Featuring brand new art by Away, this release pays homage to that formative and truly prolific period of Voïvod’s ever-evolving career. We have to remember that these three records feature so many classics, songs that became staples from the band’s live set for decades, like “Ripping Headaches” (from RRRÖÖÖAAARRR), “Overreaction,” “Ravenous Medicine,” “Order of the Blackguards,” “Killing Technology” (from KILLING TECHNOLOGY, where their prog influences first show), “Tribal Convictions,” “Chaosmöngers” and “Psychic Vacuum” (from DIMENSION HATRÖSS). Those HATRÖSS demos may sound raw, but fans will surely love to hear that everything was already there on those tapes before those songs were properly laid down in the studio.

Also included is a fantastic 40-page book (20 only in the CD edition)–newly designed by Away–called COSMIC DRAMA (just like that HATRÖSS song!). It features tons of rare photos and illustrations, as well as a brand-new interview with the drummer/artist on the Noise era. Underneath all the LPs, embedded in box set, you will find the CHAOSMONGERS DVD, which overflows with good stuff from the Noise era. There are original music videos, vintage interviews, camcorder-shot live performances (even a bit of some early hometown gigs), backstage and behind-the-scenes footage (en Français!) and more.

By more, we mean two never-before-released concerts: one recorded in 1988 in Chicago, and the audio from the infamous 1985 World War III festival (where Possessed, Celtic Frost and Destruction all played their very first Canadian shows!). Plus, exclusive to the LP edition, hidden under the DVD, awaits the amazing KORGÜLL THE EXTERMINATOR USB. Yes, a Voïvodian-shaped drive to feed your own computer with all the tracks from the LPs. How rad is that, eh?

Even if some of extra content could be found on the 2017 Deluxe Editions of those three Noise records (released on 2-CD/DVD through BMG/Noise), there is no doubt a whole lot of love was put in to make FORGOTTEN IN SPACE extra-special and definitive. This a must-have for die-hard Voïvod and LP-collecting fans out there. 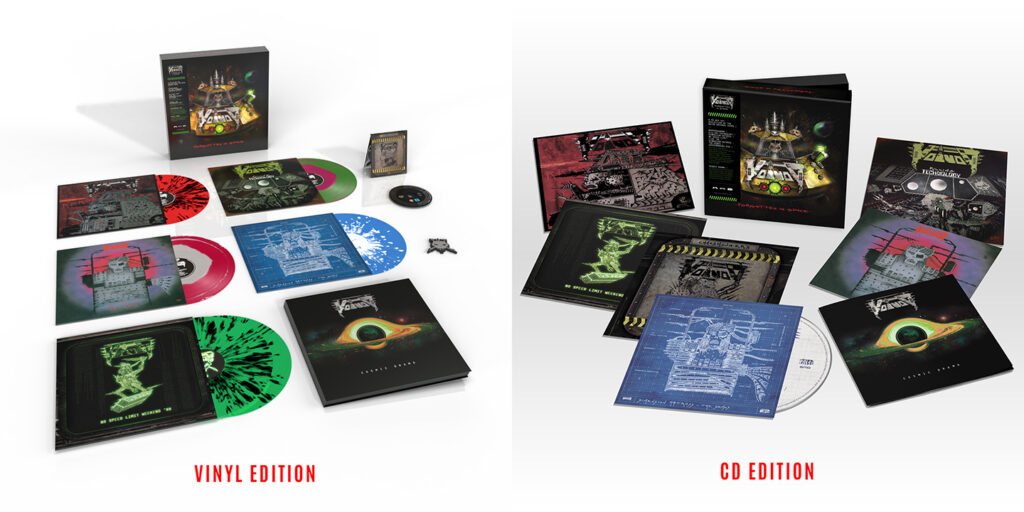