Hailing from Mexico City, Yecatl Peña is a prominent linocut artist on the rise. Much like Tom Savini, he uses the horror and beauty of what he sees as inspiration to create scenes of terror, bringing viewers to a discomfort that commands attention. You just can’t look away. What attracted you to linocut art?

I was drawn to it because in Mexico it is everywhere. It’s a very “Mexican” artform because of the tradition of struggle the Mexican graphic artists developed in the 20th century. Because of that the Mexican state quickly adopted it to show how the Mexican revolution was “successful” and how they were speaking in the name of that success. You could see the art of José Guadalupe Posadas and Leopoldo Méndez in the school textbooks and it was very powerful to me since I was a little kid because of the historical heaviness of it, but also the great power of the image contrast. Calavera De Don Folias Y El Negrito (Calavera of the Lord of the Follies and the Black Man), (1930)

Where do you get the inspiration for these horrific scenes?

Most of my work is inspired by true events. Trying to pay homage to the great graphic artists like Leopoldo Mendez, Adolfo Mexiac or Fanny Rabel, I try to portray situations that affect our society. I deliberately pay attention to the dark side of social interaction because I feel most contemporary Mexican graphic artists avoid that part of our daily life. Of course there’s an element of fiction because I don’t want to point out right or wrong in a very complex society, as Mexican society is, but I do want others to pay attention and think about day to day circumstances that otherwise are just thought of as anomalies. What are some of your influences in horror?

I am a huge fan of Arthur Machen and that part of everyday horror that escapes our comprehension. I found out about him via H.P. Lovecraft so I will always have a soft spot for the Providence bigot nerd. I definitely love Ambrose Bierce and I find that urban legend about him quitting everything to join Pancho Villa in the Mexican revolution very appealing. I also love gothic horror, stuff like The Monk by Matthew G. Lewis and The Devil’s Elixirs by E.T.A. Hoffman changed my life. In Spanish, I really love Emilio Carrere, especially his book La Torre De Los Siete Jorobados. I don’t know if it’s translated to English, but it’s an amazing and funny pulp, horror, occultist novel from the 1920s. He has some amazing short tales about spiritism with a lot of humor going on. When I was a goth teenager I found out people were still writing and reading horror because of Poppy Z. Brite so she’s definitely an influence for anything I do.

Can horror be political?

As any form of art, horror is a reflection of the world at the moment it was created.

I think the author chooses whether to portray certain things or remain silent. In that sense, even if the author doesn’t want to hide a part of reality consciously, at least one person will point to that gap in the future and will question why that was missing. It’s not like the writers, directors, and artists need to include every single issue that is going on in the world at the moment of creating some haunted house short film, but I think a ghost story also shows how we treat each other.

Talk about your many commissions for band art.

As a part of the Mexican punk scene, I started doing flyers for shows and records of my bands when I was very young. Some people liked it and started asking for art for their shows and records. It was very important to me because I never had any art training so my art school was drawing stuff for punk bands. Some people out of Mexico heard about my stuff mostly because of reviews in Maximum RocknRoll and I had the chance to work with people I respected a lot. Tell us about your bands and your involvement in music in Mexico City.

My first band was called Inservibles and it was snotty, noisy, fucked up punk. We didn’t know what we were doing, but people liked it so it helped us make strong friendships outside of Mexico which helped us tour abroad many times. Because of that, bands from Latin America, USA, Canada, and Europe at that time started asking us to book shows and tours in Mexico for them, so we did that for a long time. I had a band called Muerte, which was some sort of goth HC punk band. It was cool but we disbanded because punk can be very annoying. Right now I play guitar and do vocals for a band called Ojo Por Ojo very influenced by ‘80s Italian hardcore punk like Nerorgasmo and late Wretched, Rudimentary Peni (every single dissonant punk band says so but we actually like them haha) we have some metal going on, we just like fast, weird and heavy punk.

This fall is ten years that me and my friend Kuble have run a label called Cintas Pepe. We have been releasing Latin American punk records by current bands only. It has been a pain in the ass, but also one of the best things I have ever done.

What are some of your favorite horror films?

The whole saga of Zé Do Caixao [Coffin Joe] by José Mojica Marins is just unbeatable. Alucarda (1977) by Juan López Moctezúma was my introduction to Mexican horror cinema, but now I prefer his version of E.A. Poe’s “The System of Doctor Tarr and Professor Fether” that is called The Mansion Of Madness (1973). It’s just so visually challenging and demented. Maybe English-speaking people do not know about this, but some years ago a documentary was made about a gay couple that helped Juan López Moctezúma escape from the mental institution he was kept in the last days of his life. The movie is called Alucardos (Alucardos: Retrato de un Vampiro, 2011) it’s so beautiful. I’m a sucker for Dario Argento, even the latest ones that are bad. The Wicker Man (1973) and The Texas Chain Saw Massacre (1974) were an obsession for me as a teenager along with Bad Taste (1987) and Braindead (1992).

I was really shocked by Ruggero Deodato’s Cannibal Holocaust (1980). Not because of the gratuitous violence, but how the Western cinema would portray people as subhumans and how Western people should fear their “inhumanity.” The more I saw it, I was convinced it was on purpose and after a second look I thought it was the opposite.

You can purchase Yecatl’s works, including huge 40 x 40 linocuts for $200 USD here. Keep up with him on Instagram and Bandcamp. 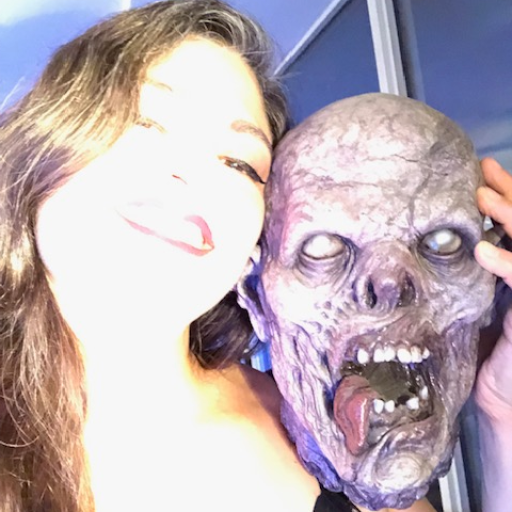