Horror fans are funny. You won’t find a fanbase as encouraging of experimentation (even when it goes wrong), as loyal to horror writers, directors, and actors (even when they turn in shit work), and as willing to enjoy a film’s good parts (even if the whole leave you wanting). At the same time, scour any review aggregator — Letterboxd, Rotten Tomatoes, even the comment sections of trailers on YouTube — and you’ll find much of the opposite. Horror fans can be profoundly snotty about work they don’t like. When Blumhouse was really cranking out those Into The Dark films for Hulu, I can’t tell you the number of reviews I’d scroll past on Letterboxd after watching the latest (usually very fun!) offering that said things like “this wannabe Tobe Hooper director SUCKS. one star,” or “BORING. too long,” about an 85 minute film.

Simultaneously patient and intolerant, endlessly open minded and endlessly upset that everyone isn’t Tobe Hooper, nowhere are the contradictions of horror fandom more glaring than in the wake of assessments that follow the release of a horror anthology film. Sure, the horror anthology is a staple in every horror junkie’s diet, and has been as far back as 1945’s groundbreaking Dead of Night. But that doesn’t stop people from judging every horror short as a failed feature! If you can just relax and enjoy things, there is no pleasure more exquisite than imbibing a new horror anthology film. Like a buffet of genre cuisine served to you on a single plate, anthology films are often ingeniously curated narrative experiments that must tap into deep, collaborative thinking to rationalize several sensibilities, several entry and exit points, and multiple creative teams coming together in one universe. On the commercial side, they’re easier gigs for beginner filmmakers and historically underserved (women, POC, LGBTQ+) filmmakers to land.

The latest anthology film for us all to argue about is PHOBIAS, a fun-loving, rip-roaring dive into fear itself from Vertical Entertainment. The PHOBIAS wraparound story is that of a sadistic doctor (Ross Partridge) contracted by the U.S. government to distill the essence of fear so that it can be weaponized. Five phobic patients have been abducted at the moment of primal confrontation with their fears, and are alternately rigged to an electric shock apparatus that shunts the fear juice out of them and into little canisters. Their five backstories are our five shorts, and Joe Sill’s “Robophobia” kicks it all off. “Robophobia” follows Johnny (Westworld’s Leonardo Lam), a young, Asian man living in a gritty neighborhood in New York City. Violence and pain follow him wherever he goes — a gang of white racists bully him on the street, across the hall in his apartment building, an angry man continually threatens and abuses his wife, and in his own apartment, his wheelchair-bound father ails from an unspecified respiratory condition. When he begins receiving anonymous texts from an unknown, all-seeing, and all-powerful entity, the power to strike back he once craved catches up fast. Too fast. We spoke with writer/director Joe Sill about the production, the pandemic, the timeliness of his anthology segment, and more. 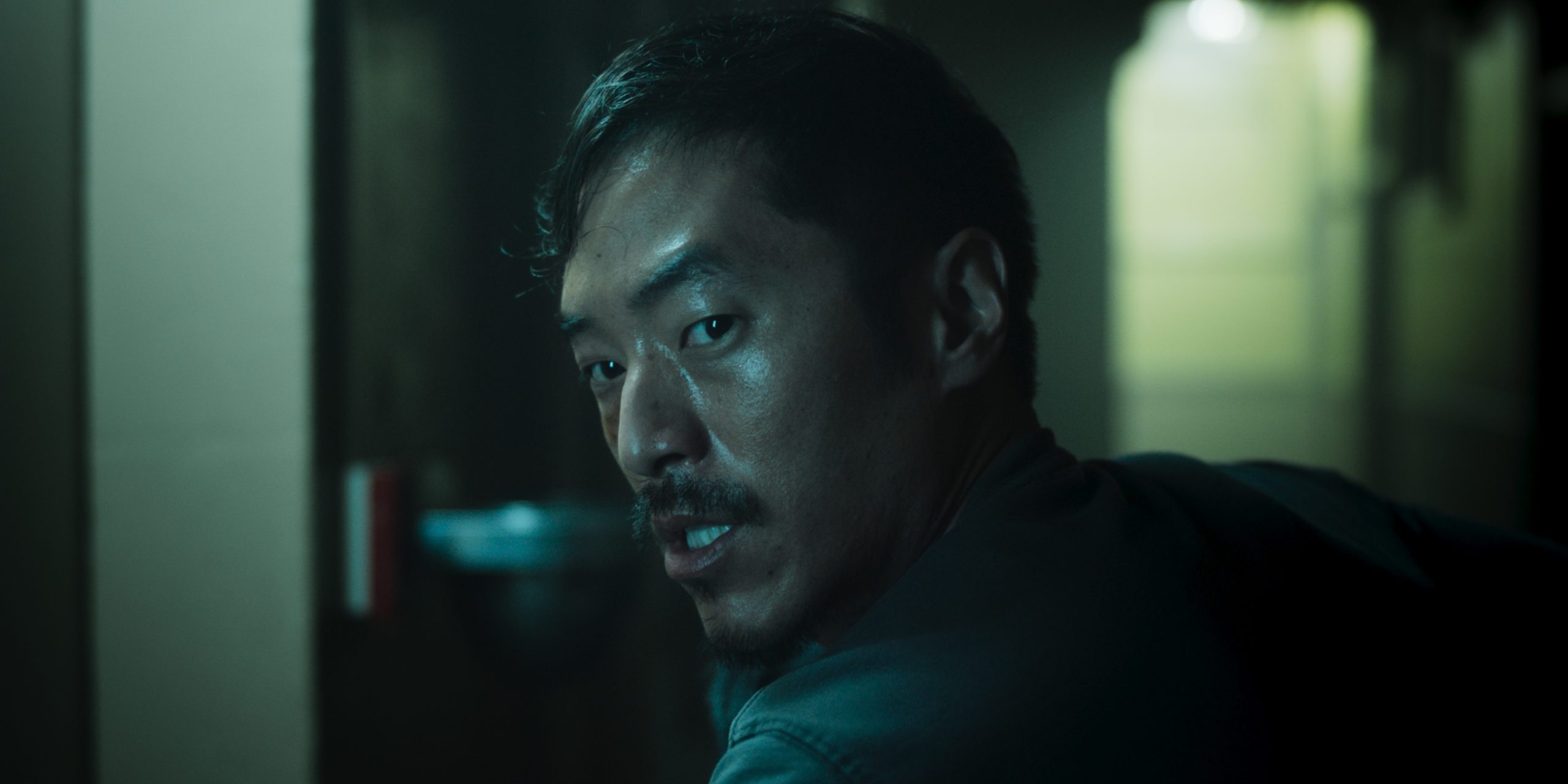 Looking at the trajectory of your career, you started out at the turn of the 2010s making a string of high-concept horror/fantasy shorts, and your first narrative feature, Stray, came out in 2019. But you work a lot on the commercial side, making promotional shorts and featurettes for different brands.

Where does Phobias find you in your career? What does it mean for this work to finally be out?

Well, it’s an interesting question to answer. I think the pandemic caused a larger awakening in a lot of people in very different ways. For me, it really gave me the time to think about where I was heading versus where I wanted to go with my career.

In the pre-pandemic chapter I was working pretty heavily in advertising as a commercial director. In that world and in making independent films as a filmmaker the concepts I was attracted to were world-building concepts, big imaginative storytelling that takes you to another place, and stories of desire. Up until the pandemic I was having this repeated experience of taking big projects out into the world, pitching them, and having people say, “these are great concepts but you are not a filmmaker who has the box office under your belt yet to pull them off. So could we take this concept and option it and have someone else direct it?” I would appreciate it and it’s extraordinarily flattering, but I’m passionate about these concepts, so I would hold onto them. When the pandemic happened, live action went out the window. Everything that I was doing that was live action went completely out the window, from commercials to independent filmmaking. So the films that I was developing were postponed.

It was a complete shift. It gave me the chance to sit down and reflect, to ask myself, “Am I telling the stories that I want to tell in the way that I want to tell them?” I guess it isn’t surprising that I went back to my roots, going fully into animation. Over the summer of the pandemic I went back to old projects I had pitched out that I was always excited about but the worlds seemed too big. On paper they sound kind of silly. I ended up making a short out of an old concept called Autonomous, and doing all the animation myself. That became an exciting new way of creating, I felt like I was in the driver’s seat completely, owning and controlling the narrative of what I want to do with my career. That was a piece that prior to the pandemic was not possible to make. But, during the pandemic, because we weren’t asking anybody for permission, we just made it with animation. Suddenly we had this project to pitch out and it got sold as a TV show.

I’m assuming PHOBIAS was shot pre-pandemic, given the tight pack of actors in enclosed spaces without masks. How does that fit into this career awakening?

You know I think it almost feels like a bit of a time capsule. It’s like this thing coming back to life that was a part of the pre-pandemic chapter of work. There’s a warmth to that.

I like to describe the experience of PHOBIAS as like summer camp; we had five different directors going out and making their shorts because they wanted to and because they were excited about the particular phobia they were dealing with. We all had the same cinematographer [Nico Aguilar], the same production designer [Holly Trotta], and so it was like a family unit moving around, tailoring to each individual director’s voice. It was very exciting to see, you know, what Maritte would do with the same team behind her as Chris or Camilla or Jess. Everybody had a similar enough tonal palette but different enough of a voice, that we all ended up going in such different directions. It was really a fun experience. 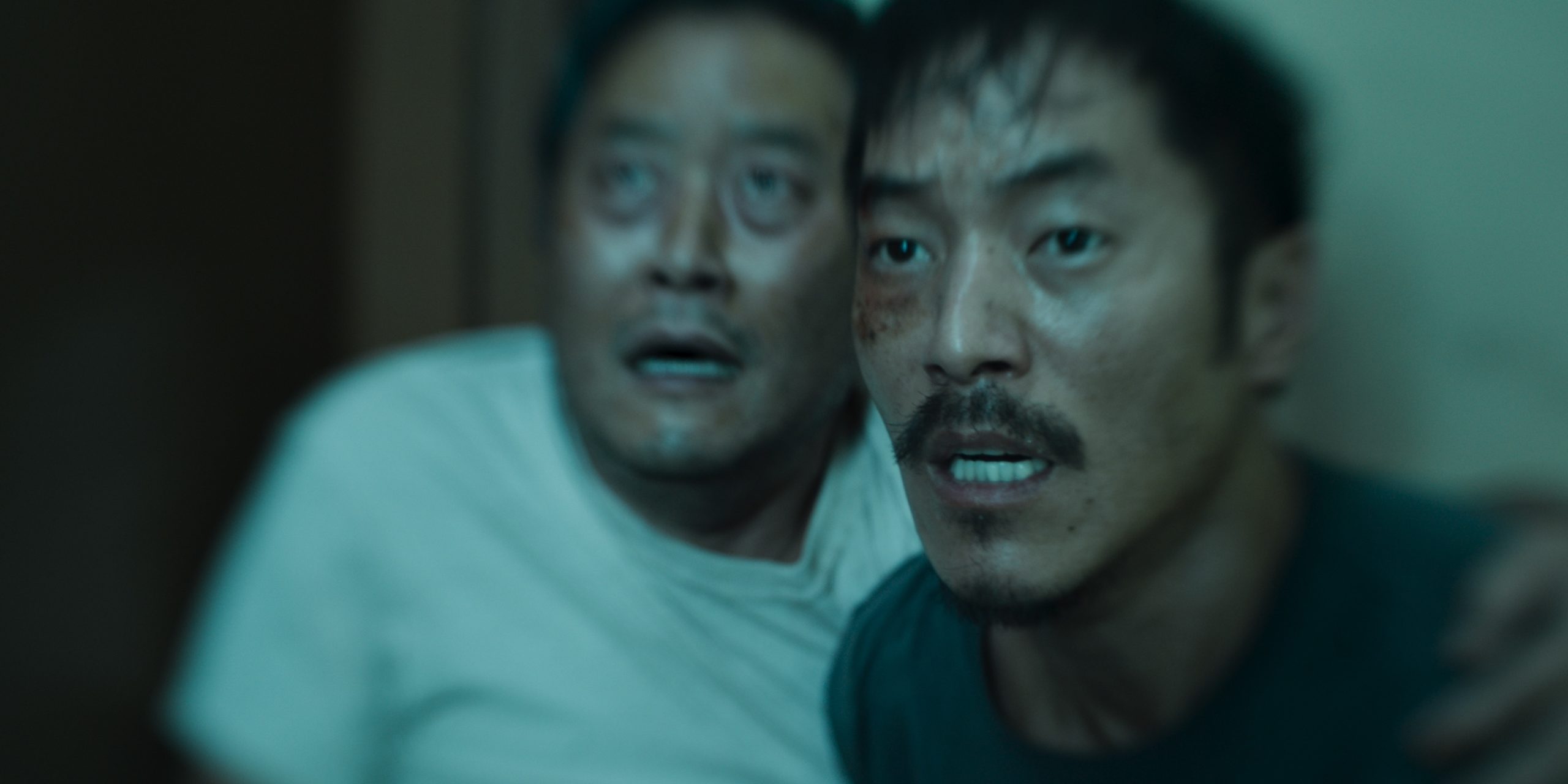 On the note of the film feeling like a time capsule, the reverse is also true of your short. You directly confront a kind of distinctly American, white male chauvinism in “Robophobia,” specifically expressed as anti-Asian hatred. Since #StopAsianHate is in the news right now, I wonder if you were struck by that connection?

I know …. It’s interesting because I could not have planned that at the time. I’ve definitely experienced my fair share of that kind of hate response. I live in Los Angeles and I’ve been surprised while living in a culturally agreeable place like this that there is still tension. It hasn’t disappeared, in fact under the pandemic it’s only intensified. During the pandemic tension around everything has deepened. When I set out to make this short and have that depicted, I just drew on conflict that I’ve experienced, and that many of my friends have experienced. I think I was just using that as a vessel to add conflict to the Johnny’s story.

Another eerie connection is that Steve Clark, who plays the main character’s father, seems to be suffering from a respiratory illness?

Oh man. I am late to connecting these dots. It’s even in the particular phobia. When I was developing “Robophobia,” deepfake-ing voice and likeness was in its latent stages. Nowadays, apps are fully focused on voice as a social media platform. There was all the paranoia over Zoom cataloging and databasing your videos and studying your visuals. They own your likeness. As exciting as it is, technology is going in terrifying directions.

One film that “Robophobia” calls to mind is Personal Shopper by Olivier Assayas, with the anonymous texts coming through, and the sender being able to see you seemingly anywhere you go.  What films or filmmakers you were thinking of when you made the short?

I’ve gotta check that one out. I would say that if you could take Ex Machina and mash it up with Death Note, you’d get what I was going for. If you had the power to tap into this all-powerful otherworldly entity to play judge, jury and executioner, would you do it? What would you do with it? And what moral ambiguity follows from that choice? There’s a little bit of The Matrix in there — the follow the white rabbit scene, where you get that text message form an unknown entity. I’m a big Matrix fan.

I loved the locations you shot in. I don’t know if you actually shot in New York, but the New York you depicted felt like a throwback to that gritty ’70s and early ’80s period of Smithereens and early Abel Ferrara. The white and blue light coming down from street lights and out of shop windows, the leaky yellow apartment building light of the interiors, all that texture.

I love New York City, and you can get some really incredible natural texture there…but we shot this in downtown Los Angeles. I’m glad it was convincing!

It was an actual apartment building. The floor was gutted, totally empty when we got there, so we built it up. Holly really brought it to life, really sickly and dark, but also homely and warm. It was fun to build that space out from scratch, because the bones were so warm and textured, and the walls were cinematic. That light in that hallway was already very sickly, so it worked out.

It seems like you’re generally always working under the umbrella of sci-fi, horror, and fantasy. What is your relationship to the horror genre?

I’d say that only recently I’ve been able to articulate what my genre is, and it’s just world-building. As holistic an umbrella as that can be. I love it because world-building can be science fiction, it can be fantasy, and it can be horror. Some of my favorite horror films build entire worlds out of the real world, bring it to another place that just feels parallel yet otherworldly. Or in fantasy, Pan’s Labyrinth for instance brings you out of our world and into a stylized space that only barely resembles our own. Using escapism as a tool to not only engage the audience’s imagination but also place them outside of their own shoes to show them what the world is like from another perspective. That’s what I’m all about.