Five strangers battling crippling phobias find themselves caught up in a government plot to weaponize fear in Vertical Entertainment’s new horror anthology, PHOBIAS. Featuring a diverse ensemble cast that includes Westworld‘s Leonardo Lam, Lauren Miller Rogen (Superbad, Grey’s Anatomy), and R&B legend Macy Gray (who also serves as co-executive producer), Phobias explores the lives of ordinary people placed in desperate circumstances and the deadly consequences that result when they give in to their respective fears.

Behind the scenes, PHOBIAS gathers five of the most talented writer-directors working today each tasked with delivering their own uniquely terrifying part of the film’s story. Among them is New Jersey-born actor-turned-filmmaker Chris von Hoffmann. After directing several shorts, von Hoffmann made his feature debut with the 2016 post-apocalyptic thriller Drifter which he followed up with the darkly comedic Monster Party in 2018. Von Hoffmann’s segment for PHOBIAS, titled “Ephebiphobia” (fear of teenagers), stars Lauren Miller Rogen as Emma, a middle school teacher who falls victim to a home invasion carried out by her own students.

Chris von Hoffmann recently took the time to discuss his segment in PHOBIAS with us as well as the state of horror, and why teens are so darn scary. 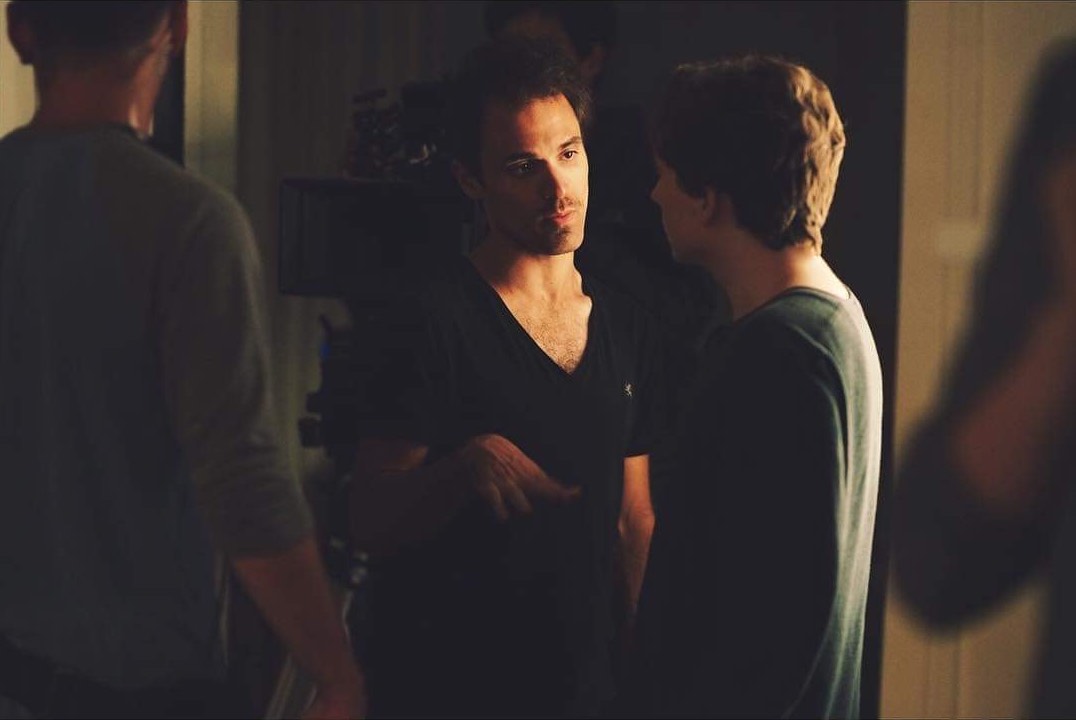 How did you get involved with PHOBIAS?

I worked with a couple of the producers on a film called Monster Party that I made. When that film was in post-production, the producer kind of brought me on. He said I’ve got this film PHOBIAS, and we’re assembling directors, and he brought me on. And then, we all met — myself and the other directors and producers. And then Radio Silence (the creative team behind Devil’s Due and the “10/31/98” segment of V/H/S) came on. We all met at the producer’s apartment and started brainstorming and pitching concept ideas. [After deciding on] the concept ideas, they said go off and create look books and write a script. . . it was kind of an on and off process for a little bit. Finally, the following year, the money was secured and we started rolling.

Tell me about your segment, “Ephebiphobia.”

The segment started off as a home invasion story with teenagers breaking into someone’s house. It originally took on more of a kind of an Apt Pupil angle. Originally, it was an older man who had sort of a bizarre background, and [the teenagers] were getting revenge on him for something. I don’t know what was the tipping-off point to change it to a woman principal character, but eventually, that happened, and it became a teacher instead — it made a little more sense, maybe. The original script was way more ambitious. It had a lot more stuff going on. Once you start going down the development path and get into pre-production, you’re seeing how the schedule was only three nights. . . I was like, “Well, I don’t want to blow my feet off.” So I wanted to rewrite it to make sure we can organically execute this in the amount of time that we have. So the stunts got limited, but hopefully, they pack a punch.

“Ephebiphobia” has a very ’70s slasher vibe reminiscent of John Carpenter’s original Halloween. Were you consciously going for that look and style?

It’s funny that you bring that up because Halloween is such a classic example, but I did bring that up to my director of photography. We did watch Halloween. When I look at [the film], there’s something very simple about it, and it has a very simple aesthetic, but it’s stylized in its own very minimal way. Yeah. I’m glad that you brought that up because that’s your classic ’70s suspense where it’s not super blood and guts, but it’s more about tone and atmosphere.

Tell me about your cast. Mackenzie Brooke Smith is especially effective as Blaire, the ringleader of the sinister teens.

She was awesome. I love actors — I don’t really look at anything else but the actor’s faces when I’m watching a film. I have a lot of respect for them and what they do. Originally, it was supposed to be a sister and her little brother, and the sister’s boyfriend. Those three actors [Mackenzie Brook Smith, Benjamin Stockham, and Joey Luthman] auditioned, they all sort of looked alike. I thought, “Well, this makes a lot more sense since they’re getting revenge for a family situation. So, let’s just make them all siblings.” They were all super committed. When Mackenzie met Lauren, she was like super in character and you could feel the tension when she shook her hand. It was kind of funny. (Laughs) It was really admirable that she was kind of going “method” for that moment. Lauren, Joey Luthman, Benjamin Stockham — they were all just super committed, likable people behind the scenes.

From Children of the Damned to Devil Times Five to hundreds of other examples, scary kids have been a staple of the horror genre. Why are sinister children so popular in horror?

I think there’s like this weird energy that they have. . .young people are just so energetic. There’s something psychotic about the amount of energy they have. I remember when I was like a teenager back to 10, 11, 12 years old, I was so hyper. There’s something scary about that energy. They don’t really need to sleep much. They’re just kind of wired most of the time. . .they get manipulated by social media and a lot of things. They just don’t care! They’ve got their whole life ahead of them, and they feel like they can get away with anything.

How does PHOBIAS fit in the long tradition of horror anthology films?

I think it falls more in line with sort of ’70s horror anthologies. There’s something, I think, kind of classic atmosphere about it and there’s not an overabundance of onscreen gore and splatter, which would be more ’80s oriented. And I like how [the segments] make for a cohesive experience. They don’t feel detached like they’re coming out of separate movies.

How does working in an anthology format differ from a traditional, single narrative feature? Does pose any unique challenges as far as maintaining a unified tone?

That was definitely a big, big discussion that we all had multiple times in preproduction to make sure that the tone was there. From a technical standpoint, we all shot with Panavision lenses — same lenses, same camera. One DP shot three segments and another DP shot two segments. Everybody was in sync with each other. We wanted to make sure that we did the best we possibly could to keep the segments tonally and visually in line with each other. And also, there was one editor who edited the whole thing. Working with Radio Silence helped a lot because they had produced Southbound and V/H/S which are awesome. They had been around the block and learned from a lot of things. The biggest thing they brought up, in the beginning, was like, “Get one editor to cut the whole thing.” Radio Silence was just a great asset to us.

Considering how frightening real life has become, how do you scare audiences in 2021?

I’ve always been attracted to anything that feels realistic. I have a lot of respect for supernatural [horror] and I think there are some very frightening supernatural movies. I think, in general. that if you dig deep into something psychological and very real that people respond to it — like The Social Dilemma, which was the scariest movie I saw last year. I just kind of like realistic stuff. People in general are just really frightening.

Where do you see the horror genre going?

Tell me about your influences. How do you become a fan of horror?

Horror movies were the genre that introduced me to movies — horror and dark comedy. All the franchises like Friday the 13th, especially the first five or six, I loved. There was a certain tone, especially in part four, that I loved about them. They felt very realistic. They had a very haunting, disturbing tone to them. And the Nightmare on Elm Street movies. I just loved the surrealism of them. John Carpenter, you know, he’s the man. And Alex Aja, as far as more recent genre filmmakers. I just love how aggressive he is. I love a lot of international horror, too. I love French horror.

What do you hope audiences take away from PHOBIAS?

Actually, I hope they get educated on phobias they weren’t aware of. Maybe they’ll be entertained and learn something, maybe. (Laughs) It’s definitely a roller coaster of a lot of different segments, but it all kind of fits in line, so I hope they’ll go along for the ride of it all.

What’s next for Chris von Hoffmann?

Vertical Entertainment’s PHOBIAS is On Demand and Digital on March 19th, 2021! You can keep up with Chris von Hoffmann at his official website, chrisvonhoffmann.com