Visiting WWII’s Unit 731: The Laboratory of the Devil

Harbin, China – The frigid capital of the Heilongjiang Province. Every year, the Harbin International Ice and Snow Sculpture Festival brings in tourists by the busload during the winter months. Before going to see the numerous ice and snow sculptures built for the occasion, people can see the Saint Sophia’s Cathedral, a former Russian Orthodox church, or go to the Siberian Tiger Park, in which visitors can buy live chickens or even cows to feed to the hungry beasts. Chances are there might also be an MKW (Middle Kingdom Wrestling) event going on. The company was also established in Harbin – making the city the official hub for Chinese pro wrestling.

Harbin is also home to a place far and away from the ice sculptures in the inner city. Instead of a busload of tourists, a lone city bus (number 338, boarded at the Harbin Train Station) containing locals on the way to their jobs in the southern Pingfang district of rural Harbin, makes its way down the snowy road. After an hour ride, seemingly in the middle of nowhere, with nothing but snowy fields and the odd shipping building around, the stop emerges for the site of one of the most notorious sites of WWII – a place where horrifying human experiments sent shockwaves throughout the world – Unit 731.

Unit 731 was built in 1935 during the Japanese occupation of Northeast China (then Manchukuo) and received support from the Japanese government until 1945. Experiments were routinely done on human beings, with at least 3000 people dying from experiments within the facility, with the number reaching close to 400,000 as a result of the bio-weaponry developed at the facility.

Its remote location and being disguised as a water-purification facility dubbed “Epidemic Prevention and Water Supply Unit of the Kwantung Army” gives credence to the fact that Unit 731 went undiscovered for so long. Unit 731 was comprised of 150 buildings surrounded by a wall and a dry moat, as well as high voltage wires, covering six square kilometers built by the Japanese during the 1930s. Barbwire fences still surround the location, and with the standard -20 Harbin temperature and snowy ground, it’s not hard to imagine being taken outside for a fatal experiment testing the limits of minus temperatures the human body can withstand.

Most of the buildings were destroyed in an attempt to cover up evidence, though the ruins are here to explore, mostly being base building foundations as well as a boiler room, bacteria lab, and special prison. The bacteria lab and special prison cover 15, 000 square meters, consisting of three floors, of which two were devoted to the prison, consisting of people under “special transfer” and later being used as “experimental materials.” The bacteria lab was the center for Unit 731 to study, experiment with, and manufacture bacteria. In 1945, they were both completely destroyed by Unit 731 before the retreat, and now most of the facility’s remnants are buried underground, though the base is visible to the world to see presently after excavations. 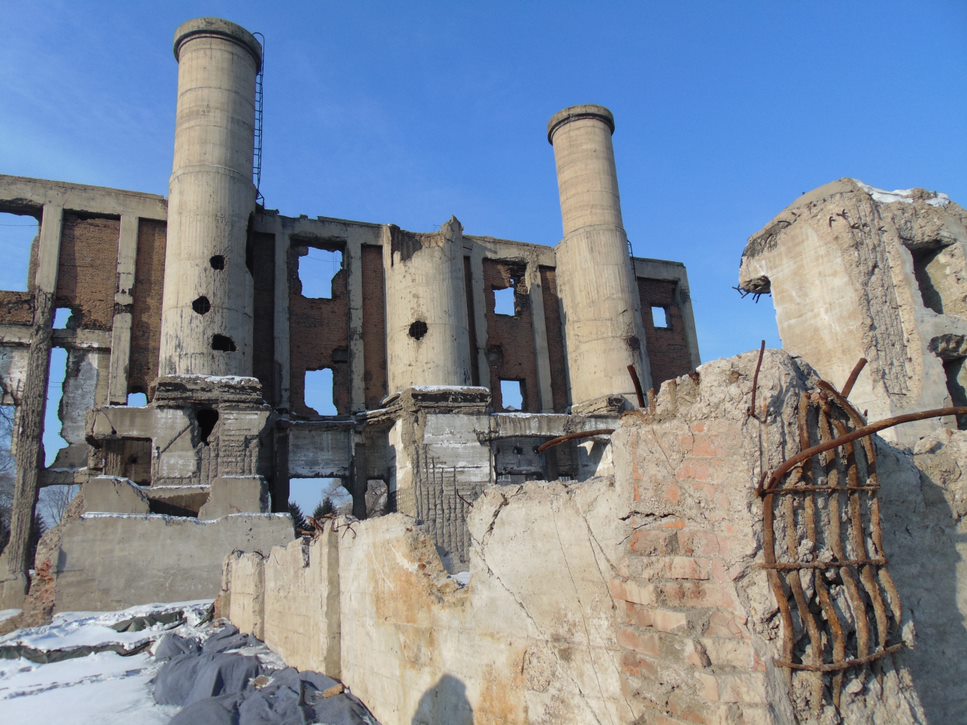 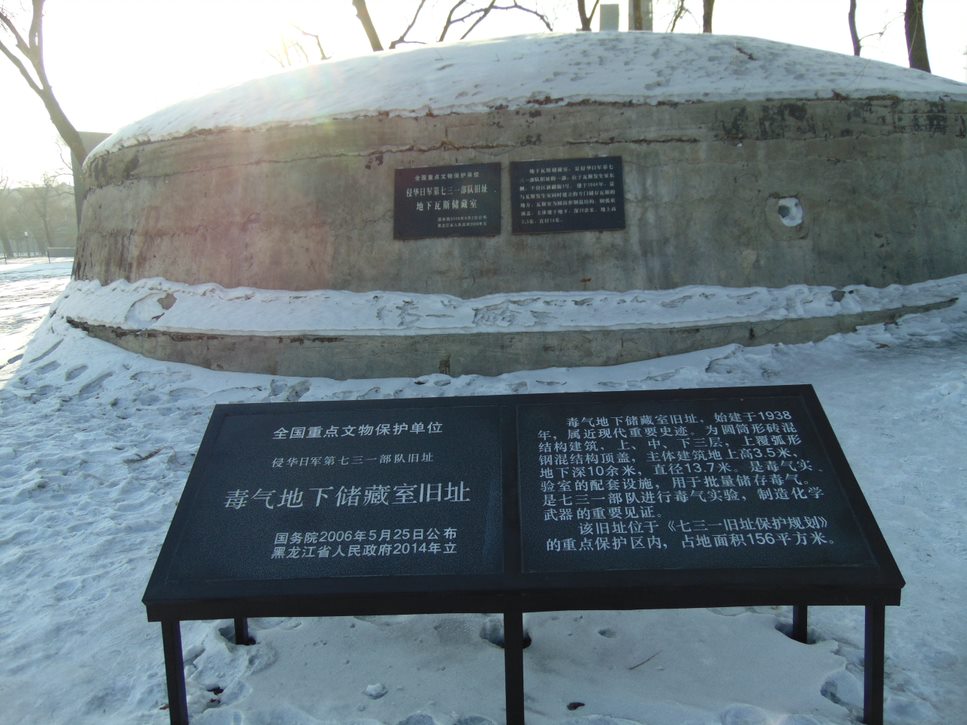 The site’s main attraction is a hulking museum documenting the systematic bio-war terror that the Japanese researched and inflicted on Chinese and Russian POWs. Opened in 2015, the museum shares architectural and thematic elements from other war museums found in China, like the Nanjing Massacre Memorial Hall. While the museum aims to be respectful to the victims of the atrocity, it doesn’t skimp out on any of the gory details – many you might already be aware of if you’ve watched films like Men Behind the Sun or Philosophy of a Knife. The museum appears as a black, angular piece of architecture which is made to look split down the middle via samurai sword – making the two halves asymmetrical, with the entrance to hell in the center.

“Inhuman Atrocities” – this is the first sign on display once entering the museum. It is in four different languages to ensure that most people visiting Unit 731 know exactly what is coming.

Unit 731 conducted human experiments according to bacteriological weapon research for biological warfare. Over 50 types of bacteria and viruses were utilized, including plague, anthrax, cholera, tuberculosis, and typhoid. Chief of Staff Shiro Ishii’s quotes regarding this research are on display including: “The military medicine is not only treatment and prevention, and the real purpose of military medicine is to attack”, “From the point of view of strategic operation, the germ weapon is a kind of advantageous offensive weapon” and “The Unit 731 has already developed the method using fleas infected with plague bacillus as the germ weapons, and the achievements in this aspect can be practically applied to the wars at large.”

Concerning fleas and rodents, the museum states that the most important animal research that Unit 731 conducted was on plague-infected fleas, as using fleas to spread bacteria was considered the most effective for bacteriological attacks. The museum contains a number of baskets that contained rodents used as flea carriers for such attacks.

The most vivid and horrifying scene – among many – from Men Behind the Sun, is of the woman having her arms frozen and subsequently smashed by scientists, exposing her bones. The display here is similarly disturbing, showing two scientists in winter-wear pouring cold water on a male subject’s arms outside, with icicles forming underneath as he screams in agony.

A woman, her child, and a dead canary nearby make up the poison gas experiment display. The Unit 731 scientists placed the subjects into an air-tight frame and took notes on the amount of time it took for the subjects to lose consciousness. Next to this display is a horse wearing a gas mask with a box attached to its back containing poison gas shipments for the battlefield. 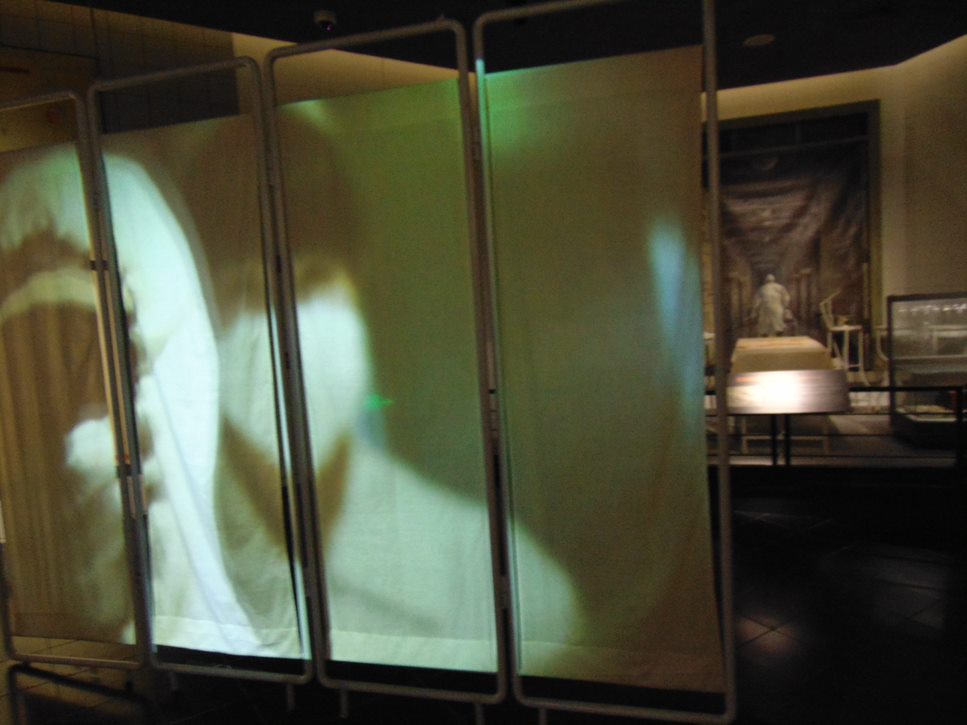 Perhaps the most disturbing display at the museum is of a mock operating room – complete with a blood-soaked operating table and various sharp tools exhibited around it, with the painting of a doctor pushing a gurney down a hallway behind the table. This is the dissection experiment room, which was used to observe the human anatomy after bacterial infection and to dissect living subjects. A horrific account of a woman dissected is exhibited for visitors to read: “The scalpel scratched from her throat to her belly and finally to her private parts. The bleeding was stopped continuously during the process. Her brain was cut apart…” 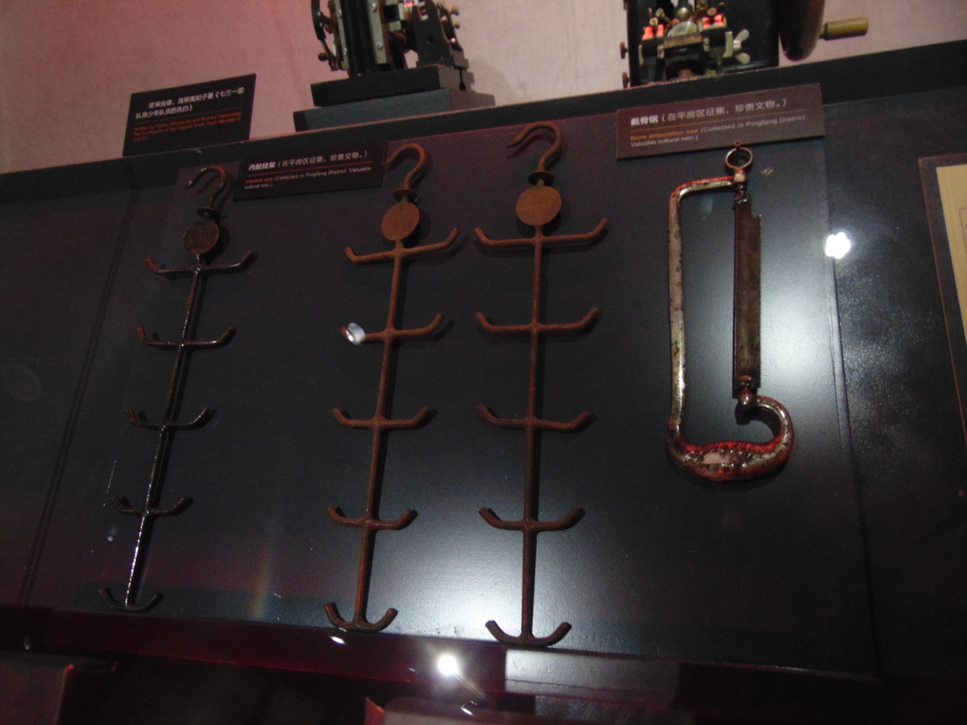 Much of the evidence of Unit 731 was destroyed after August 10, 1945, when Shigeharu Asaeda, the Japanese army general staff, delivered a withdrawal order to Chief of Staff Shiro Ishii. After destroying the evidence, they fled to Japan via trains or airplanes (they were exempt from taking part in the Tokyo Trials and war crimes charges in exchange for giving data and research reports to the US). Still, evidence was found in the rubble. Artifacts on display in the museum include scalpels and tools used in experiments, a deformed high-pressure steam sterilization tank which was used in the bacterial laboratory and special prison, tooth hooks, anesthetic masks, disinfectant boxes, viscera racks, bone amputation saws, medicine bottles, and lab wares, gas masks, microscopes, and various uniforms. There is lastly a memorial hall near the exit which lists the names of almost 3,000 victims. 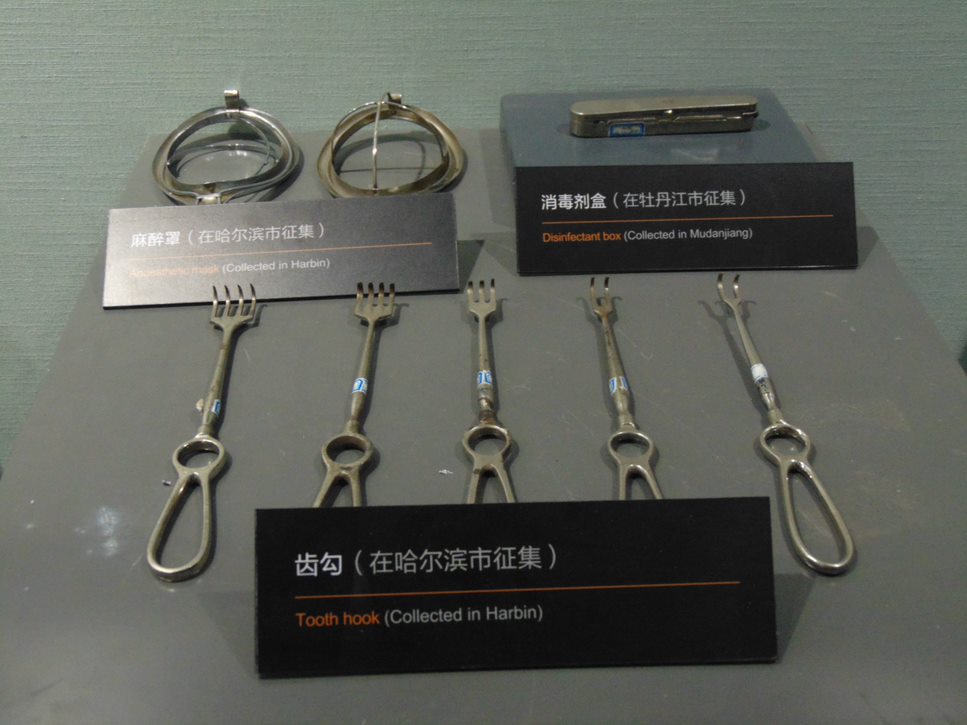 Once finished going through this portal to a real-life laboratory of the devil, make sure to stop by the gift shop where you can buy an official museum t-shirt, and on the way out, observe Harbin No. 25 Middle School. The kids don’t have to go far for quite an illuminating field trip.