Trapped in the Nursery: “THE YELLOW WALLPAPER” and the Horror of Forced Domesticity

Charlotte Perkins Gilman’s short story, “The Yellow Wallpaper” is one of the foundations of both horror and feminist literature. Originally published in 1892, The epistolary tale consists of the secret journal entries of an unnamed narrator as she undergoes a rest cure for what is presumably postpartum depression. Based on experiences from Gilman’s own life, the unnerving story makes a powerful case for women’s autonomy and the dangers of forced domesticity. K. Pontuti’s new film adapts this unsettling nightmare, leaning into the feminism. Called Jane in the film, the narrator is a young mother whose nervous condition prompts her husband to drastically restrict her activities and essentially confine her to their bedroom, a former nursery with the titular decor, for three months. Jane slowly descends into madness and begins to see a woman lurking within the yellow pattern, a representation of the woman she’s been forced to leave behind in the throes of motherhood. Pontuti’s adaptation of this classic story is a masterful depiction of creeping dread that evokes the real horror of the intensifying assault on reproductive freedom in the US. THE YELLOW WALLPAPER is a haunting nightmare about the prison of rigid femininity that hits uncomfortably close to home.

Jane (Alexandra Loreth) is a writer and new mother staying in a rented country home with her husband John (Joe Mullins) for the summer. Though she enjoys the estate’s extensive gardens, she’s horrified by the room John has chosen for their bedroom. Its walls are lined with garish yellow wallpaper, a bed is permanently affixed to the floor, and the windows are barred. Jane asks to move to a more comfortable suite, but John refuses, fearing that indulging in what he decides is a ridiculous request will further encourage her nervous condition. He’s given strict instructions that she is not to write at all, insisting she rest her brain until her vague illness improves. Prohibited from doing anything of substance, Jane spends her days wandering the grounds, sneaking entries in her journal, and staring at the ominous wallpaper. But the twisting floral patterns begin to work their way into her mind and she imagines a woman moving within the paper desperately trying to break free. 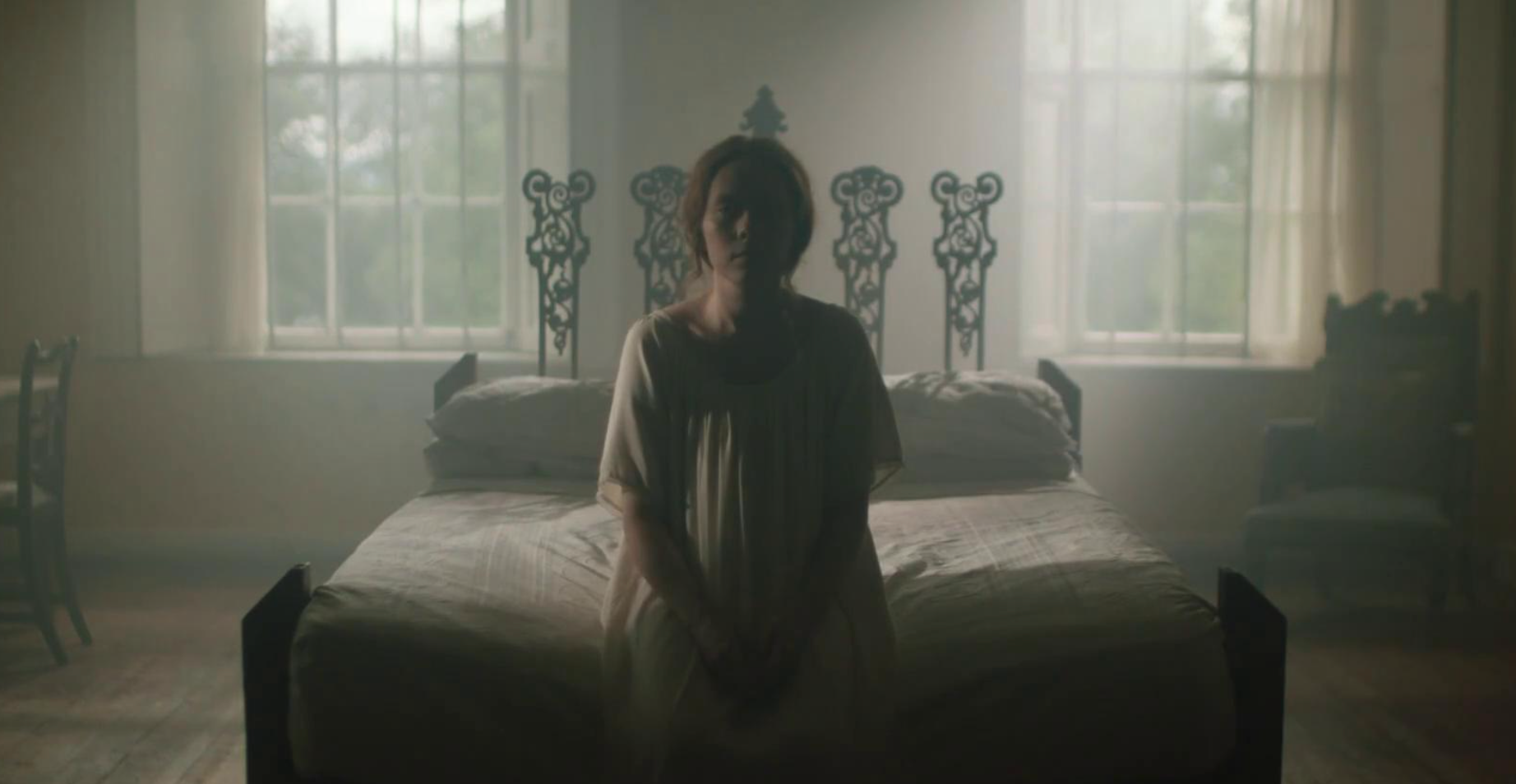 Adapting Gilman’s original text is no small feat. Describing the first person account of months spent essentially staring at a wall leaves much room for interpretation. Jane’s clandestine journal entries reveal a woman slowly unraveling, but Gilman must rely solely on her words and written descriptions, increasingly more unhinged, to convey her growing madness. Gilman spoke at length about unpaid labor within the home, and domestic inequality, sentiments still viewed by many as radical. Though not autobiographical, the story is based on her experience as a new mother undergoing a rest cure that nearly caused a mental breakdown. Gilman’s rage at the patriarchal power structure of the nuclear family pervades the stark text and Pontuti’s embelishments cement the feminist agenda, providing a clear connection to today’s frightening political landscape.

Jane’s disdain for maternal expectations presents itself in the opening scene. While traveling with John to the house via carriage, their baby begins to cry. Jane ignores the infant until John demands she do something, frustrated that her nurturing instincts have not kicked in to remove the source of his annoyance. Jane responds by casually tossing the baby out the carriage window, an extreme reaction but one that clearly shows her state of mind. Jane briefly enjoys holding her baby later in the film, suggesting it’s not the child she’s rejecting, but the grueling expectations of motherhood. John is in the carriage as well and just as capable of comforting his child. He just chooses to see this as women’s work regardless of his wife’s mental state.

THE YELLOW WALLPAPER is a haunting depiction of what happens to a creative mind when starved of all outlets. John simply assumes Jane will abandon everything about her life to become a wife and mother. He knows she is a talented writer, but insists that her talents as a mother are most important. This atrocious attitude diminishes Jane’s accomplishments as dalliance and implies  that her life should revolve around serving other people. Perhaps the woman she sees locked within the wallpaper is the ghost of her former self, yearning to escape the rigid gender norms imposed upon her. By depriving Jane of anything other than motherhood, John is essentially punishing her for not conforming to his expectations. She’s made to essentially sit and “rest” in her yellow prison until she discovers the part of herself that enjoys being a mother. Earlier in the film, Jane asks John about his day, wondering if there have been any other cases like hers and hoping for an example of how she can “get better” and back to writing. John brushes her question off, implying that his true goal is for Jane to discover her motherly instincts and forget about her desire to write at all. He doesn’t want her to get well. He wants her to fundamentally change who she is. 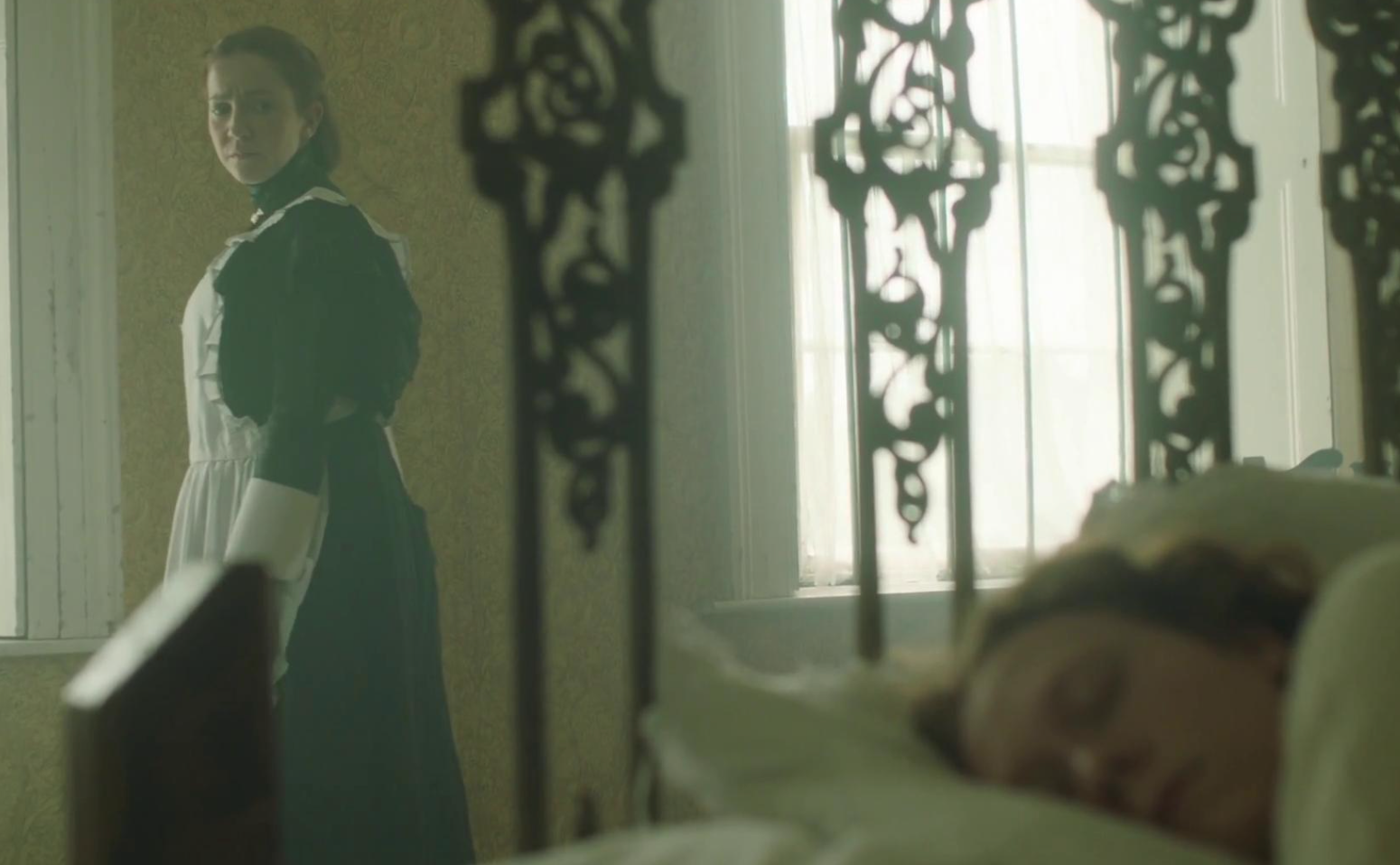 Jane shares the home with John and two maids, Jennie (Jeanne O’Connor) and Mary (Clara Harte). Jane is constantly compared to these two women who assume the roles she’s expected to play as wife and mother. Jennie tends to the home and to Jane herself and Mary is a nanny to Jane’s child. Though it must be noted that both women are paid for the jobs Jane would be expected to do for free were she not “ill.” Gilman’s story names Jennie as John’s sister, but the film depicts her as an employee, perhaps a nod to the author’s writing on unpaid domestic labor. Mary is an addition to the story and it’s possible to interpret her as an invention of Jane’s imagination. She is a manifestation of the mother Jane is expected to be and shares a name with the most famous mother in history, a literal saint praised worldwide for her sacrifice and silent devotion to her child.

Jane’s own name also offers insight into Gilman’s subversive message. The original narrator remains nameless throughout the story, assumed to be called Jane due to a single line on the final page: “ ‘I’ve got out at last,’ said I, ‘in spite of you and Jane. And I’ve pulled off most of the paper so you can’t put me back!’ ” It’s the only time the name appears in the story and a theory persists that it is actually a misprint of the name Jennie. This interpretation further enhances the depiction of a woman forced to relinquish her own identity. Jennie is the ideal housewife, totally subservient to John and wholly focused on maintaining the home. Never mind the fact that she’s paid to fill this role. Jane is expected to give up her life in service of her husband as a part of the marriage contract. If the narrator’s name is in fact Jane, another thematic interpretation emerges. For what is Jane, but a feminized version of John? With no identity of her own, the narrator is caught between who the world expects her to be and an ideal she will never live up to.

Pontuti adds another mother to the story, solidifying the themes of oppressive caregiving. While walking in the garden, Jane stumbles upon a mother rat and her babies. Though the pups are alive and attempting to feed, the mother appears to be dead. It’s unclear how she succumbed, but the implication is that she is a mother with no more of herself to give, having been drained of life by the demands of her young. Jane stomps out the litter, ridding the world of this horrific scene. It’s a harsh representation of the failure she’s internalyzed. Jane feels most free in the estate’s gardens, but even here she cannot escape the expectations placed on the shoulders of women. 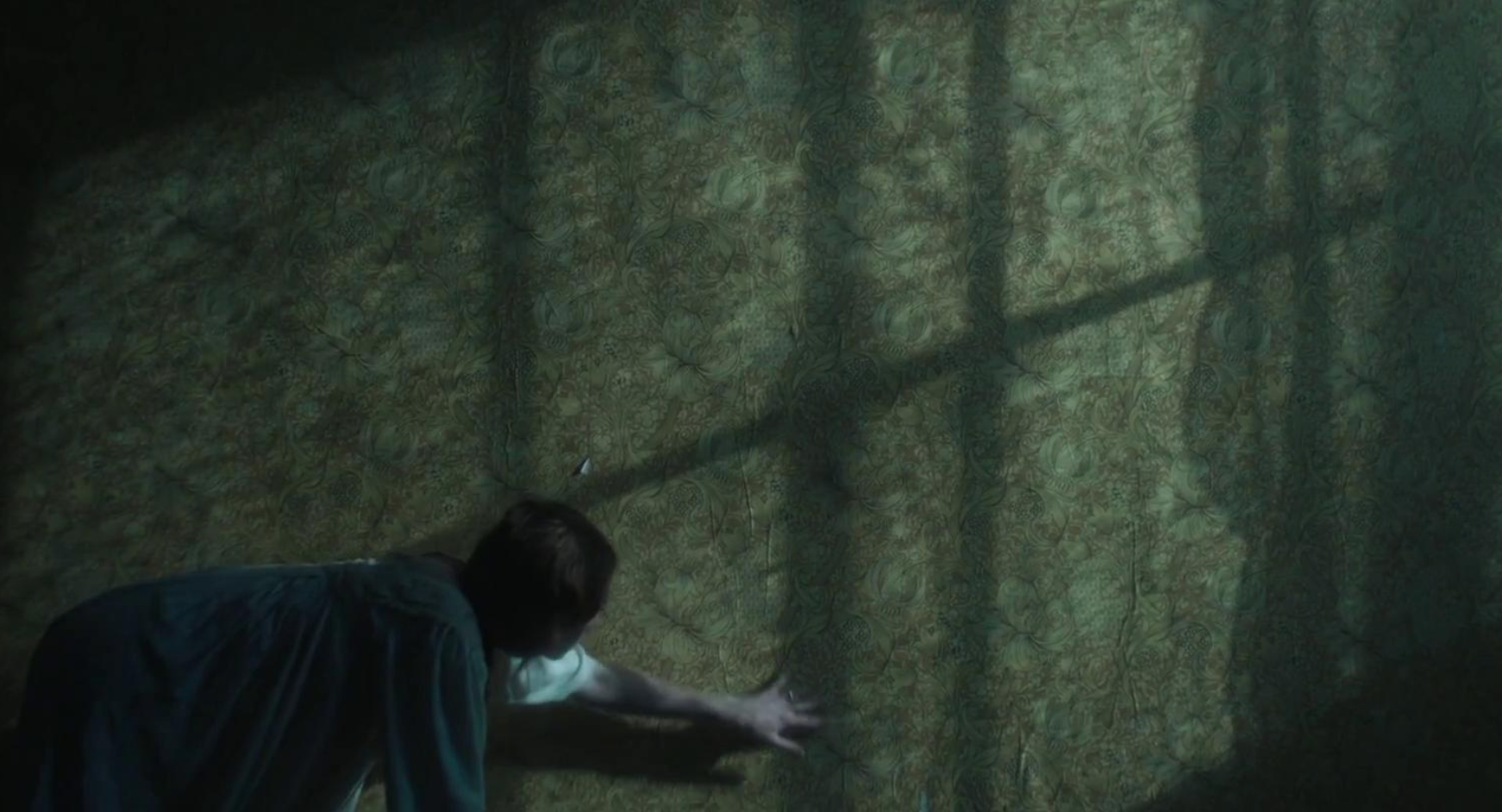 Pontuti’s adaptation feels especially poignant in the wake of devastating news that the US Supreme Court is poised to overturn Roe vs. Wade, the landmark decision giving women the right to reproductive freedom. Access to safe abortions and the invention of birth control have been among history’s greatest liberators of women. No longer slaves to our uteruses, we can chose to enjoy sex without being trapped in pregnancy and childbirth for a year then saddled with the heavy burden of a child. Calls to “Make America Great Again” show a clear desire to force women back into nurseries and delivery rooms, to a time when any life outside of domestic servitude was seen as scandalous and shameful. It’s no mistake that Jane finds herself essentially imprisoned in a nursery, nor is it a mistake that its windows contain heavy bars. Pontuti takes a small liberty with the story’s shocking conclusion by implying Jane’s suicide, but the assumption that Jane can only find freedom in death is likely the one Gilman intended.

Many women and people who menstruate, this writer included, have children whom they love dearly. There is absolutely nothing wrong with having babies or wanting to be a mother. The problem lies in telling women that a mother is the only thing they can be and all they should want. Many women choose not to have children and go on to live full and happy lives. Many men dream of becoming fathers and enjoy caring for their children. And many people do not define themselves by a single gender, often seeing no place for themselves in the rigidly drawn norms held sacrosanct by traditional society.

Women have been denied reproductive freedom for years as a method of control designed to prevent the bodily autonomy that might lead to total independence. Before access to birth control and safe abortions, we were confined to birthing chambers and nurseries, told that our most important job was to be a vessel through which to bear new life. We were forced to stare at yellow walls and told it was our place. This is what they want to bring us back to. It will be dangerous and deadly for millions of women who know that they should not and cannot be mothers. Our lives depend on breaking free of the restrictive yellow wallpaper and demanding the freedom to choose the course of our own lives. Women do not exist to create and serve new people. We are human beings with creative minds of our own and we deserve the same freedoms automatically given to men. THE YELLOW WALLPAPER shows the horrifying cost of sacrificing humanity on the altar of patriarchal domesticity.