You’ve seen Shocker, heard of Prison, love that Alzado Destroyer cover and perhaps came across The Chair on the rental shelf. Now for an examination on another “serial killer coming back after being electrocuted in prison to seek revenge” movie: The Horror Show. Directed by James Isaac (after David Blyth was fired) and released in 1989, Sean S. Cunningham who produced House originally titled The Horror Show “House 3” but after a distributor change, MGM decided they wanted a new series with a new villain, thus the title change to The Horror Show. Even though this film has nothing to do with the House series whatsoever, that shouldn’t deter you from watching this underrated gem. 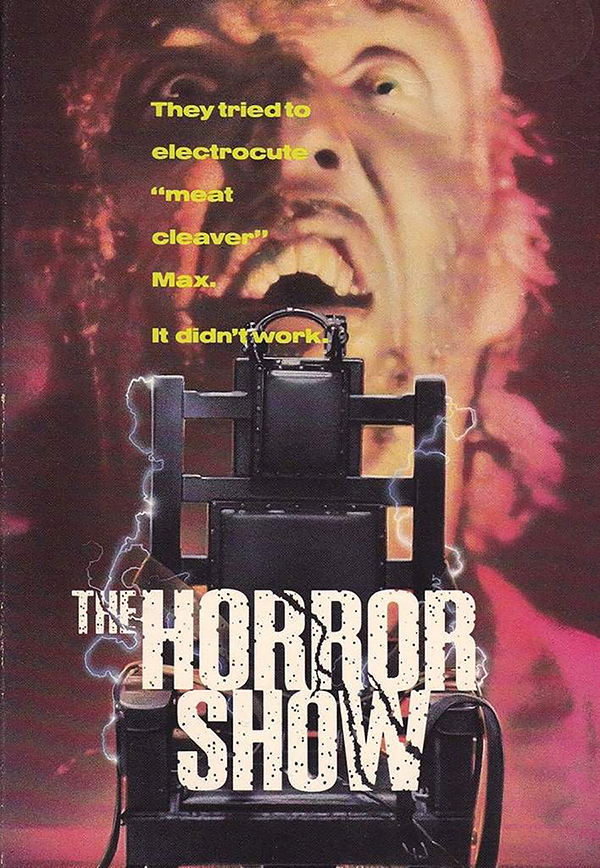 Lucas McCarthy, played by the incredible Lance Henriksen, is a detective with a seemingly happy life with his wife Donna and two teenage kids, Bonnie and Scott. The Horror Show opens with Lucas waking up in the middle of the night after hearing a strange noise coming from downstairs. He goes down to investigate with his gun and while avoiding to shoot their cat Cosmo (great name, Carl Sagan would be proud), is then transported to a flashback. In this memory sequence, Lucas and his partner Casey arrive at a diner with severed body parts everywhere to apprehend renown serial killer Max Jenke, who is played by film virtuoso Brion James (doubled by Kane Hodder who’s also the gorilla in House 2). Lucas finds Jenke holding a young girl captive and following a decapitation and attempt to capture Jenke by strangulation, he wakes up in bed to strangling his wife. So the story goes: ever since Lucas caught Jenke, he stirs with dreams that haunt him of the serial killer so he agrees that attending Jenke’s execution will help him heal and go back to his happy life, or so he thinks! 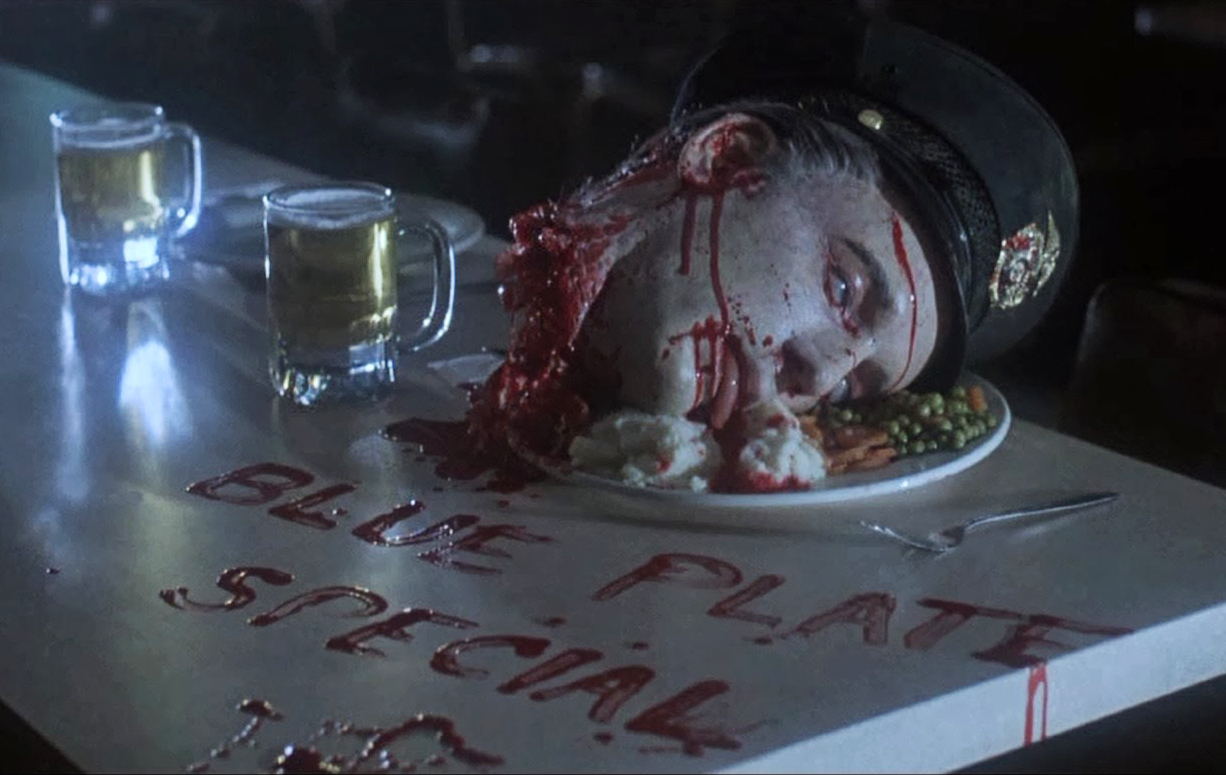 My favourite part of prison execution scenes in movies is how inaccurate the preparations are before being electrocuted such as not stuffing every orifice with cotton so they don’t shit and piss blood everywhere but then again, if they did that, we wouldn’t have this fabulous scene of gooey Brion James breaking loose from the electric chair to utter a threat to Lucas in his last breaths, claiming he will seek vengeance from beyond the grave. Also, I should mention Max Jenke has a diabolical laugh that he does throughout the movie that reminds me of The Grand Nagus’ laugh (keep reading for further trek talk). 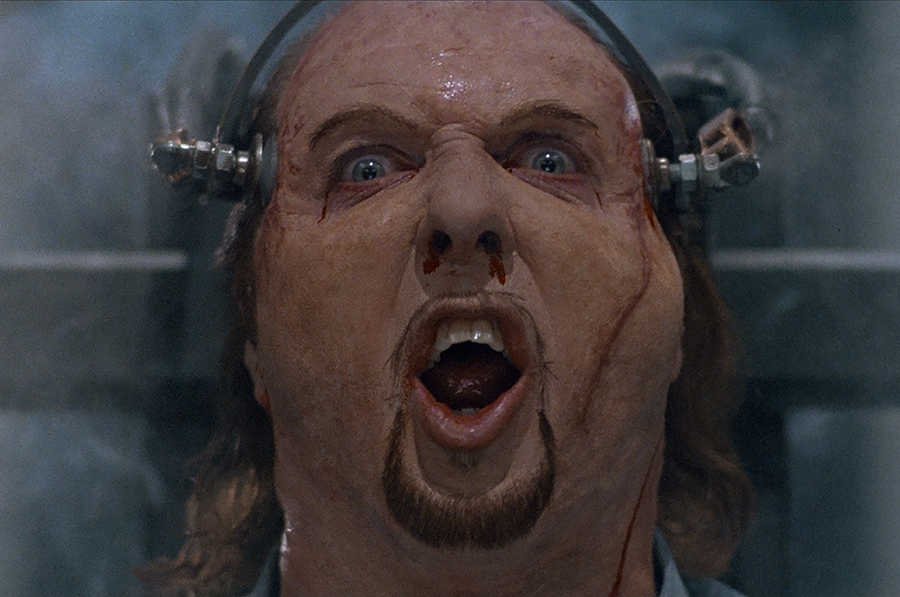 A professor named Peter Campbell, played by Thom Bray, was also a spectator at the execution. Peter asks the coroner if he can view the body to take some measurements and in doing so, yup you guessed it, some spooky shit happens over Jenke’s body and his soul survives and flies over town to live in Lucas’ furnace in the basement. You know, so his soul can stay warm while it laughs engulfed in flames.

Aron Eisenberg, I could write an entire article on him, his career and how much I love him, specifically about my admiration for Nog in Deep Space Nine. Alas, we here at Rue Morgue are a horror publication service and if you’re not well versed in the trek universe, you may recognize Aron from other horror films Amityville Horror 4 and Puppet Master 3 or perhaps the Tales from the Crypt episode “Undertaking Palor”. Aron was a shorter man because he was born with only one functioning kidney, which worked to his benefit playing a Ferengi. But after many health battles and kidney transplants, Aron Eisenberg passed away in 2019 from heart failure at age 50 and Star Trek made a tribute to him and named a ship after him in Discovery. 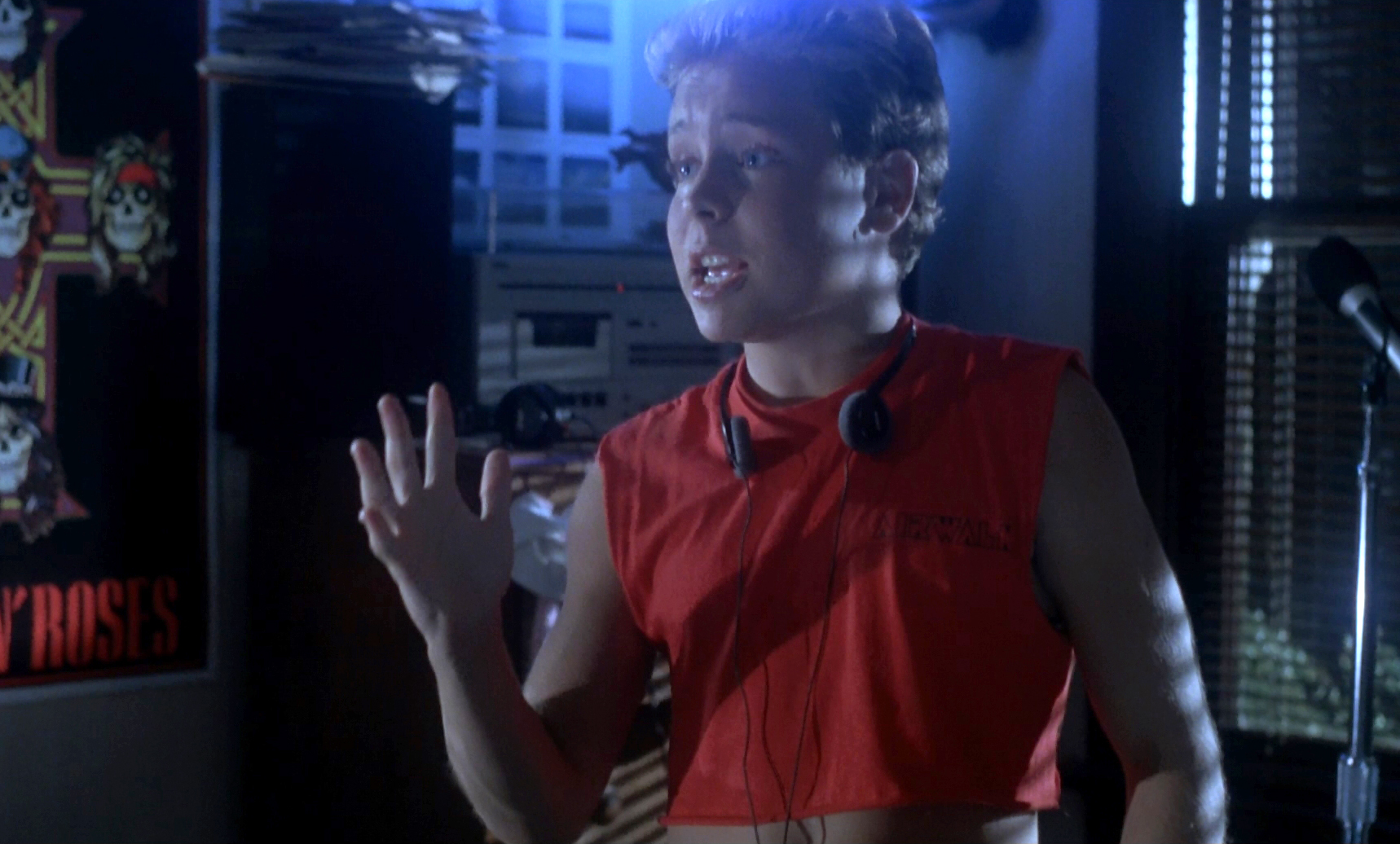 Peter knows Jenke isn’t gone for good and he tries to warn Lucas but it initially yields no results. While Lucas still suffers from flashbacks of Jenke even after he was executed, they begin to turn into delusions and eventually, they start talking to each other in person, over the phone, via the TV and through a turkey. Holy shit, that turkey dinner scene is one of my favourite scenes in ‘80s horror and is often the scene most remember from The Horror Show. Not only does the turkey grow tentacles and transparent skin revealing veins and bones, Jenke’s face becomes the face of the turkey and it talks and of course laughs! 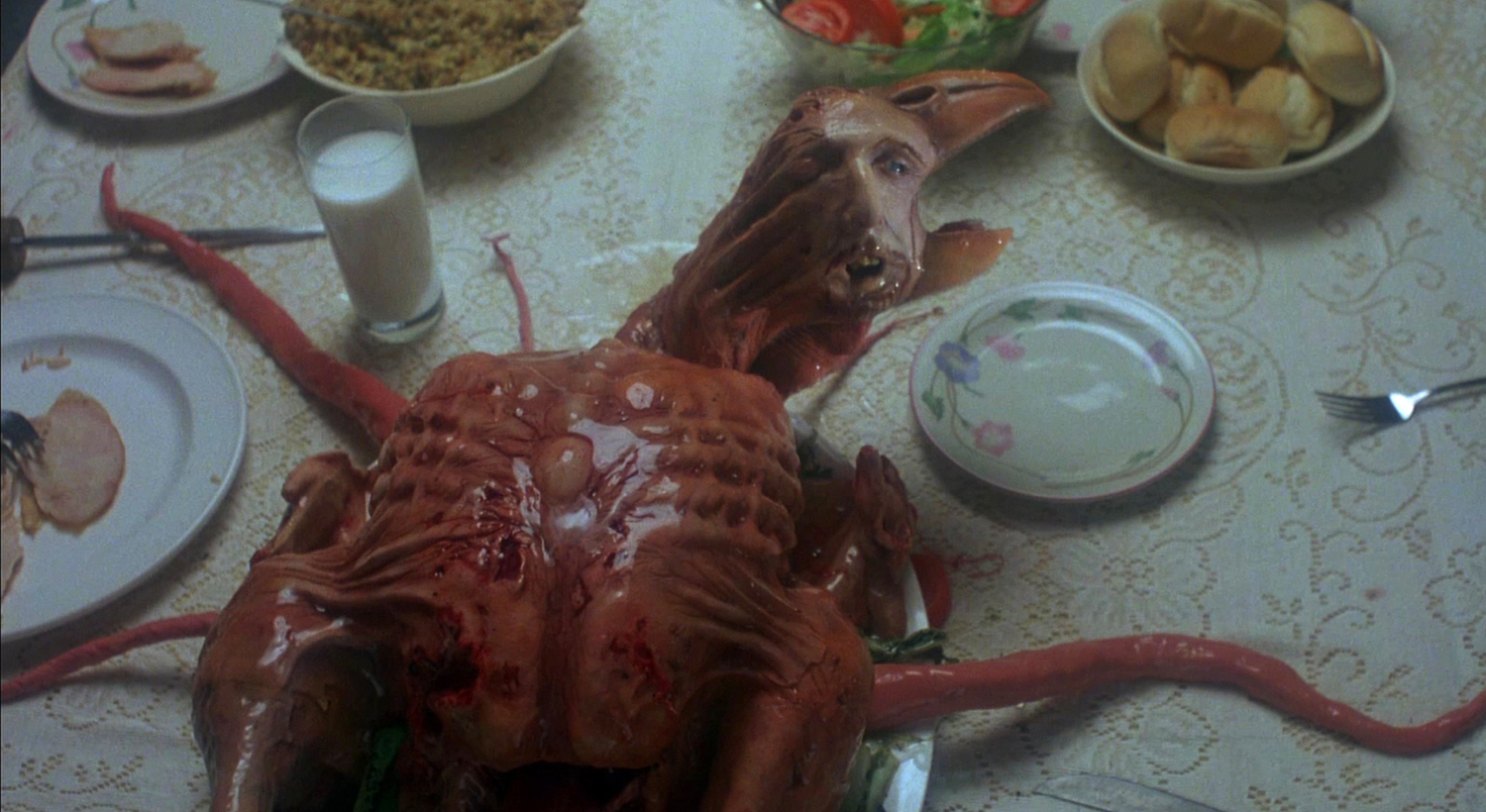 Jenke continues to torment Lucas and his delusions become so real that his family become potentially in danger and it is at this point that Lucas decides to confide in Peter and asks for help. But it might be too late; because eventually Jenke’s soul becomes so strong he begins to go after the whole family. The turkey scene has competition when Jenke pulls a Nightmare on Elm Street 2 face through the stomach effect, which is also executed very well (execute, see what I did there). 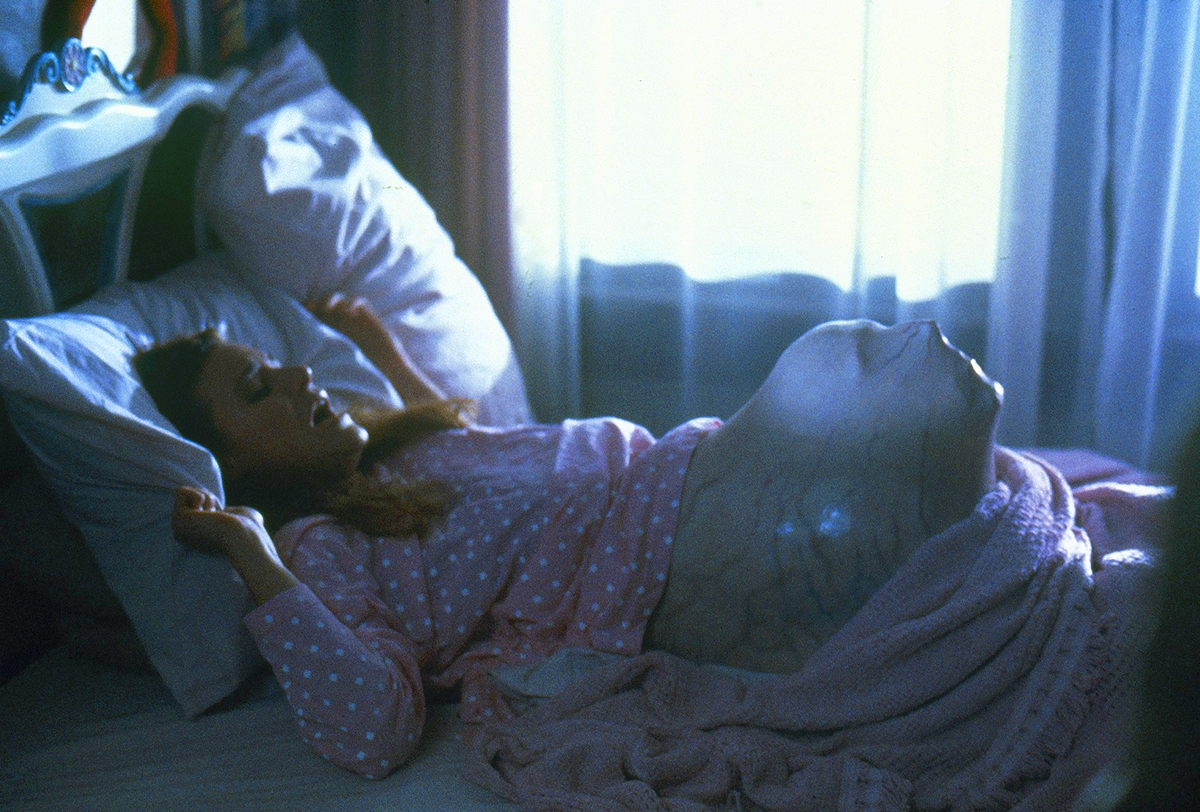 I don’t know about you but I sure love it when decapitated heads explode. While that scene was pretty sweet, there they go again, those pesky conservatives at the MPAA in the ‘80s heavily cut The Horror Show to avoid giving it an X rating and went as far as completely removing scenes. Luckily, Arrow Films put out a House box set containing the uncut version including bonus deleted scenes. In case you’re a huge House devotee and had doubts about watching The Horror Show, try going into it as a fresh watch not expecting any ties whatsoever and if Max Jenke was apparently Brion James’ favourite character he’s played, that should give you some extra incentive to give it a chance. Trust me and Brion on this, we know what we’re talking about.