The Phantom of the Movies’ spirit lives on in new VideoScope

Joe Kane, a.k.a. legendary genre critic The Phantom of the Movies, passed away in November 2020, but his long-running magazine rises again.

Kane, assisted by his wife Nancy Naglin and a large, knowledgeable writing staff, edited 115 issues of The Phantom of the Movies’ VideoScope before he died, and now Naglin has spearheaded a 116th edition that goes on sale January 14. “Joe/The Phantom of the Movies’ vision is the heart and soul of VideoScope,” Naglin says. “No one can step into his shoes or replicate his voice, but he assumed VideoScope would continue. It’s both a pleasure and a vocation to go on.

“Our mission remains unchanged: to be ‘The Ultimate Genre Guide.’ As platforms for distributing films diversify, we’re committed to focusing on the best, most varied genre entertainment, regardless of format. In VS #116, for example, we’ve introduced a new Grindhouse Streaming column. Blu-ray, DVD, VOD, streaming–people know we cover it all…told, in The Phantom’s incomparable phraseology, ‘The Untamed Way!’”

In keeping with the mag’s tradition, VS #116 covers the full spectrum of genre and exploitation fare past and present. The contents include interviews with RAIDERS OF THE LOST ARK and STARMAN star Karen Allen, Italohorror screenwriter Elisa Briganti (ZOMBIE) and repertory theater impresario Bruce Goldstein, plus the second part of a chat with veteran actor Larry Hankin; an “On the Road” piece by filmmaker Roy Frumkes (STREET TRASH); Debbie Rochon on the resurrection of her 1989 horror/comedy BANNED, and a story on the reconstruction of the 1984-shot martial-arts flick NEW YORK NINJA; festival coverage; reviews; and multiple columns. “Looking ahead to VideoScope #117,” Naglin says, “we’re planning an action issue featuring interviews with David Harris [THE WARRIORS] and FIRST BLOOD storyboard artist William Stout, as well as RE-ANIMATOR producer Brian Yuzna.” VideoScope #116 will be sold at Barnes & Noble bookstores, and individual issues as well as subscriptions can be purchased at the official website. 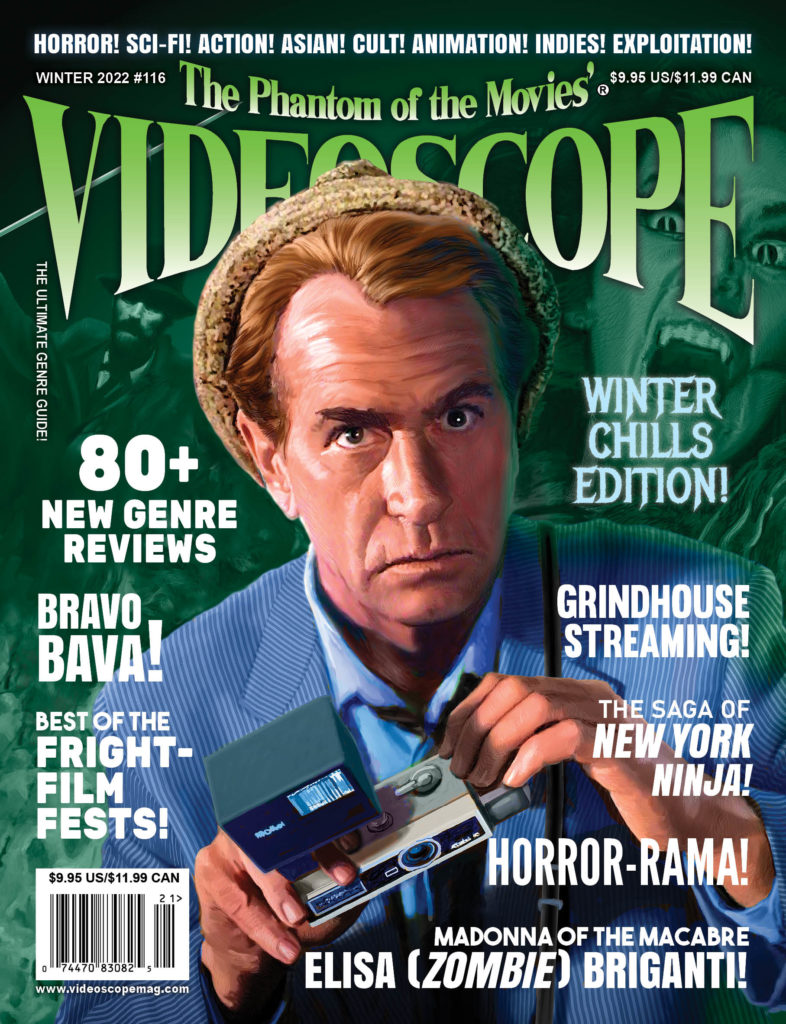