Hey, fellow horror geeks! A couple of weekends ago, I had the pleasure of covering the 1st Annual SILVER SCREAM CONVENTION at the Doubletree Boston North Shore in Danvers, Massachusetts. It’s a brand new horror convention, paired with a concert at night! The event was put on by the band Ice Nine Kills, and as a horror fan, if you are not familiar with them, do yourself a favor and click this link. You’re welcome!

The convention was a three-day event starting Friday, August 26th and ending on Sunday, August 28th. I was in attendance both Saturday and Sunday, and let me tell you, it was awesome!

Saturday was so busy that cars had to make their own spots and park along the grass lining the parking lot. I don’t think the hotel took into account just how passionate the horror community is because we pack events consistently. Horror fans are the best. That’s a fact.

Walking up and into to the event, we passed several people, decked out in their best horror garb and gear, making it easy to find our way in. (There were also signs, but where’s the fun in that?) Everyone was friendly and happy to celebrate their favorite genre. Cosplayers were in abundance, stopping to snap pictures whenever asked.

Inside, the convention area was packed with fans. Lines of vendors made up several isles to walk through, browse and shop for horror merch. I picked up both a Jason and a Freddy shirt along with two sweet glasses to go with them. The glasses came with the shirts, which was just too good of a deal to pass up, courtesy of Nevermore Designs. 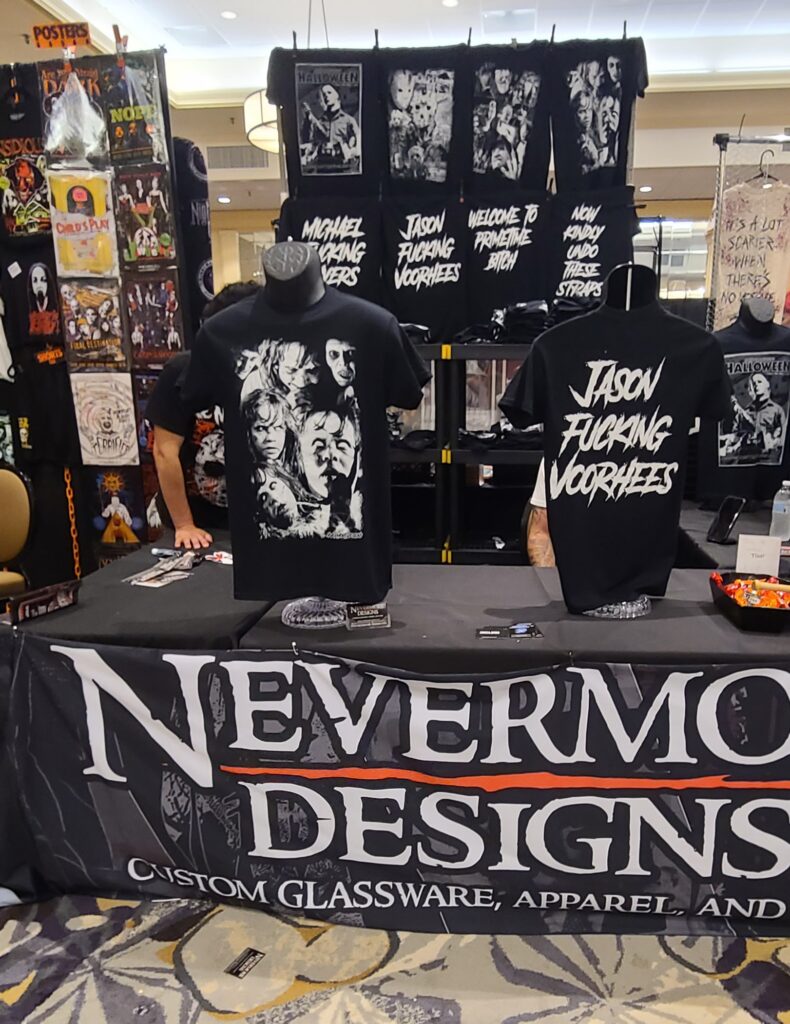 I wasn’t able to get pictures of every single vendor, there were far too many for that. I was, however, able to capture some of the more unique ones.

Kleaver Klothing out of Salem had some awesome merch. 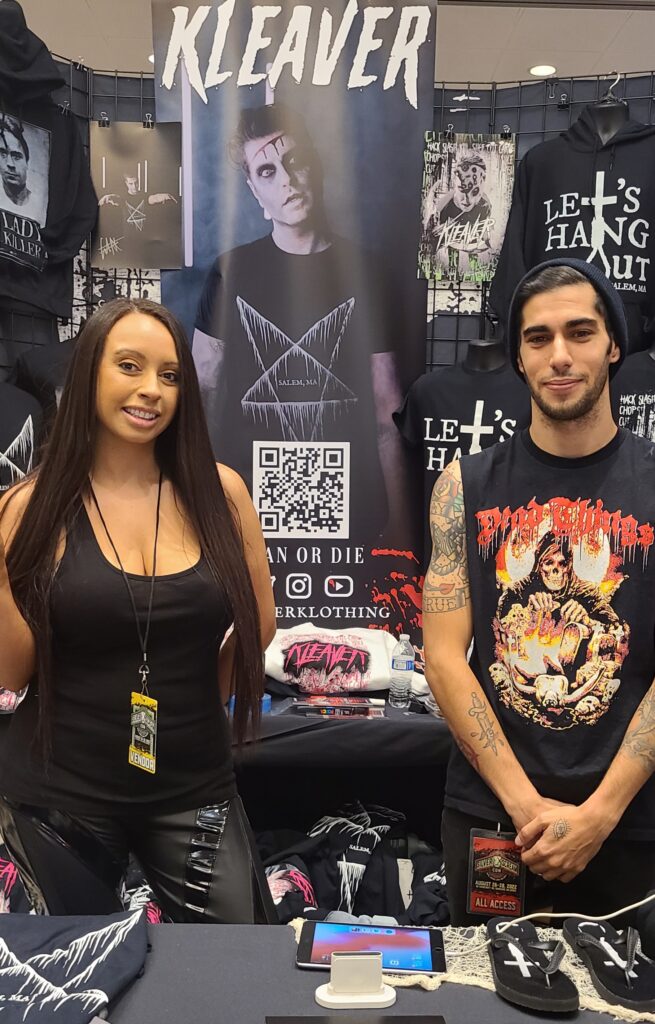 Amanda Orcutt had some amazing art on display. Check out those skateboards! 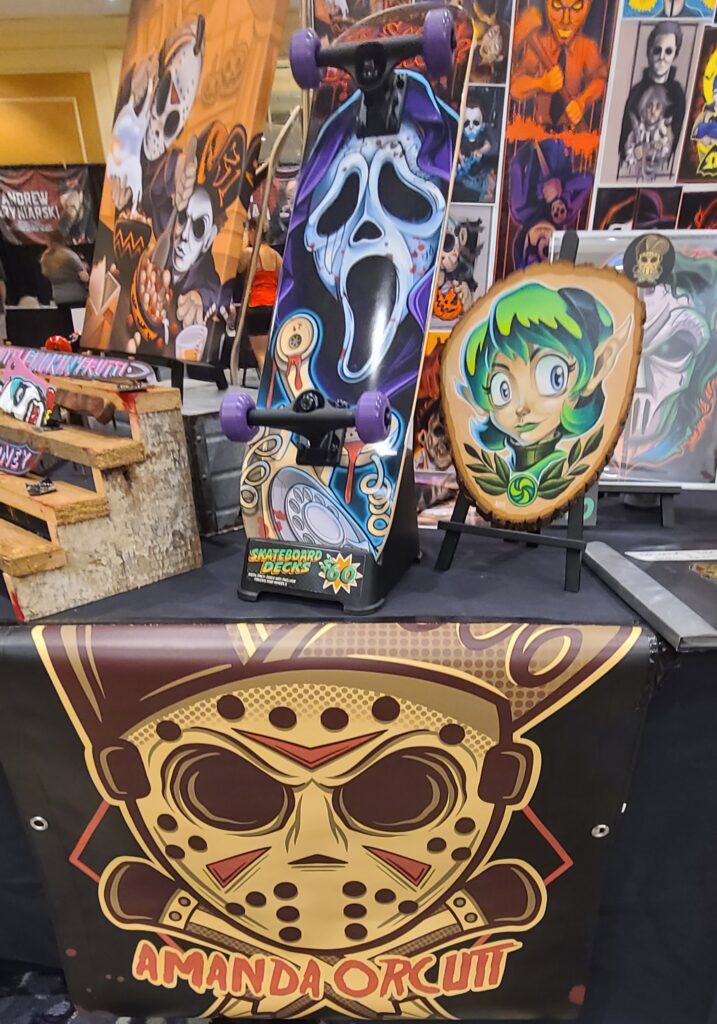 I absolutely had to get a few pics of these insane masks by Wicked Wall Masks! 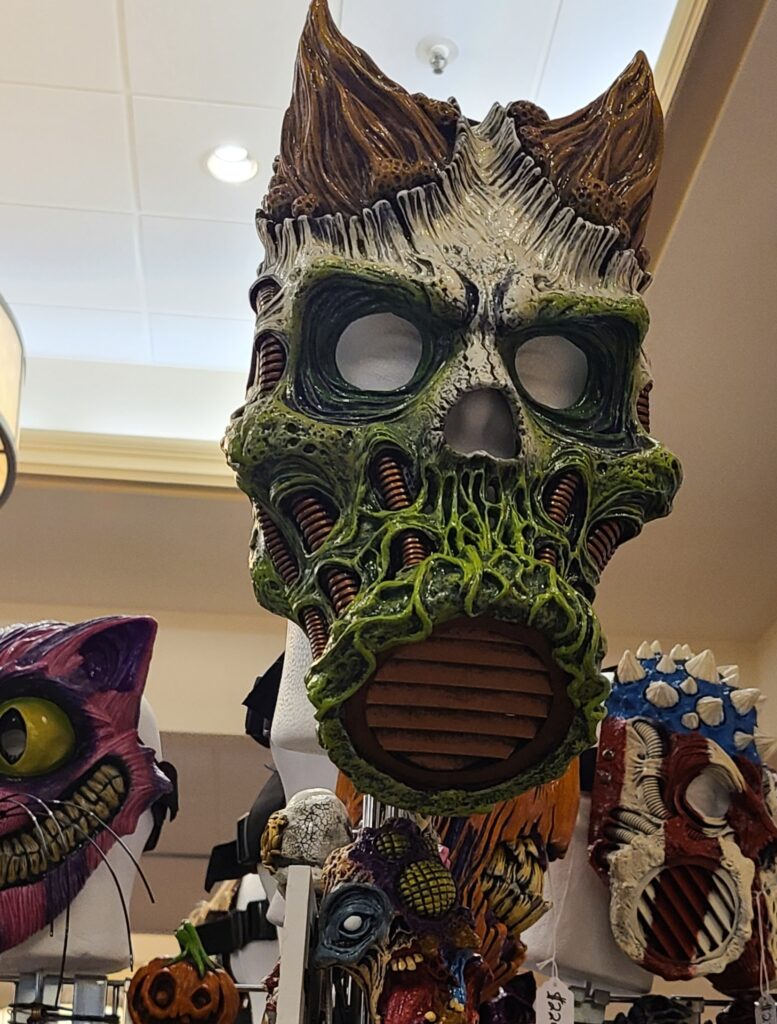 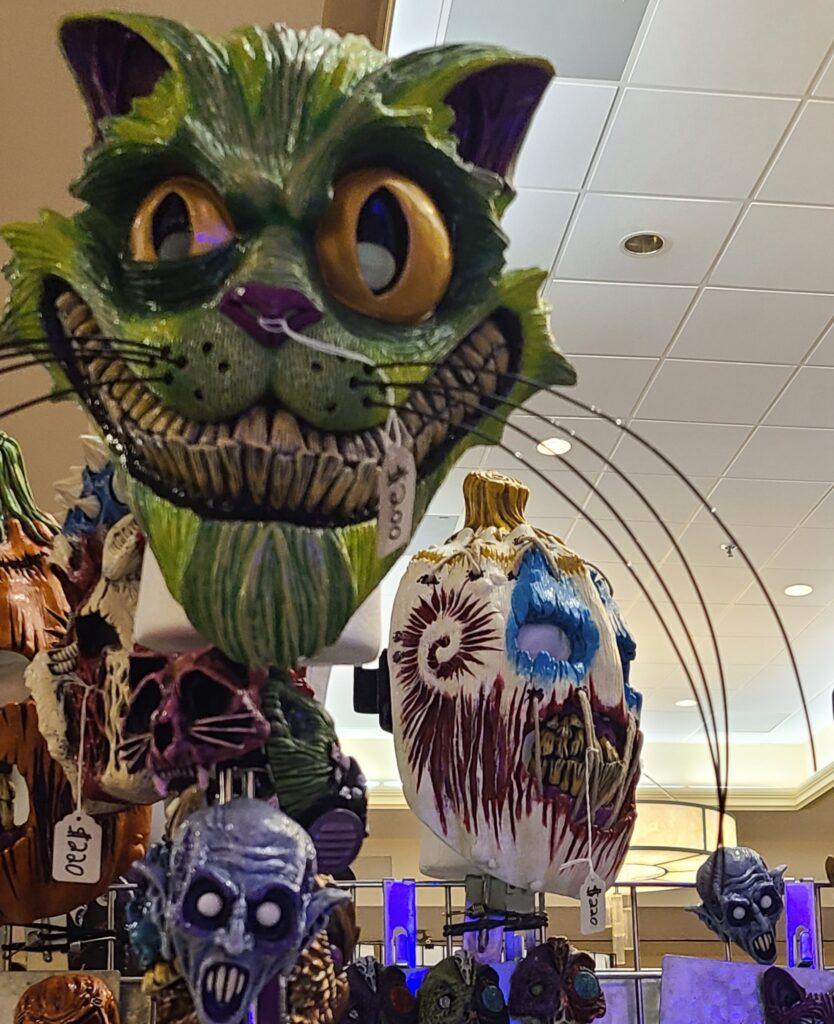 Now let’s talk about the guests! Bill Moseley was in the house (of a Thousand Corpses)! Best known for his roles as Chop-Top in The Texas Chainsaw Massacre 2 and as Otis B. Driftwood in Rob Zombie’s “Firefly trilogy,” Moseley is no stranger to conventions. I’ve interviewed him a few times and met him a couple of times in person, and Bill is the man. Seriously. Watching him interact with his fans reminds me exactly why we go to these conventions. He was there with his wife, Lucinda Jenney (3 From Hell, Thinner). Lucinda was super nice, and we got to say hello to both of them! 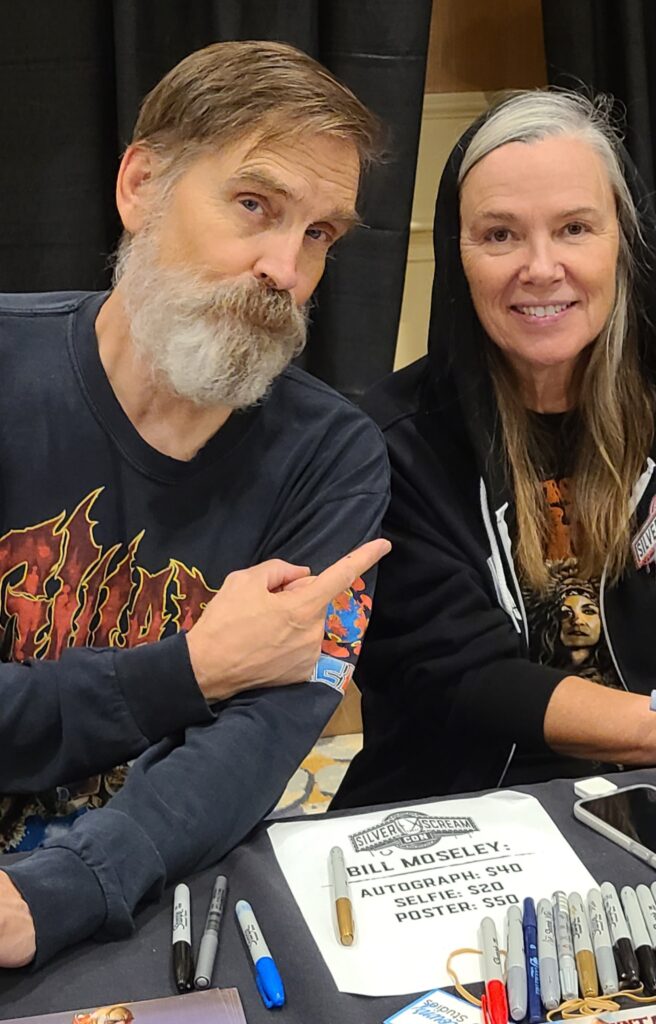 The Hell Priest himself, Doug Bradley, aka Pinhead of the Hellraiser franchise, was there! It was my first time meeting him, and I was amazed at how kind, and soft-spoken he is – a true class act! He was more than happy to talk shop and sign memorabilia for the fans – for the price of their eternal souls. I’m kidding of course, but it would seem that Pinhead was not without his sense of humor that weekend. Check out the sign. I’m still dying over it. 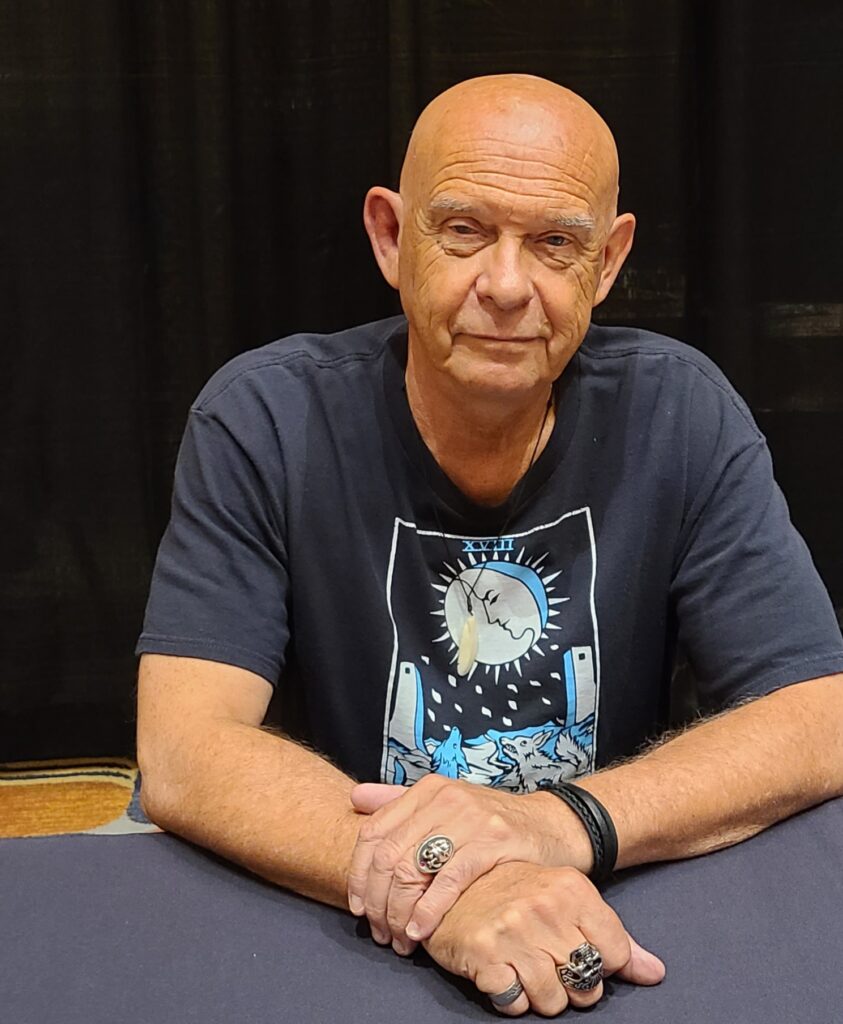 Doug Bradley took some time out from tearing souls apart to come to Silver Scream. 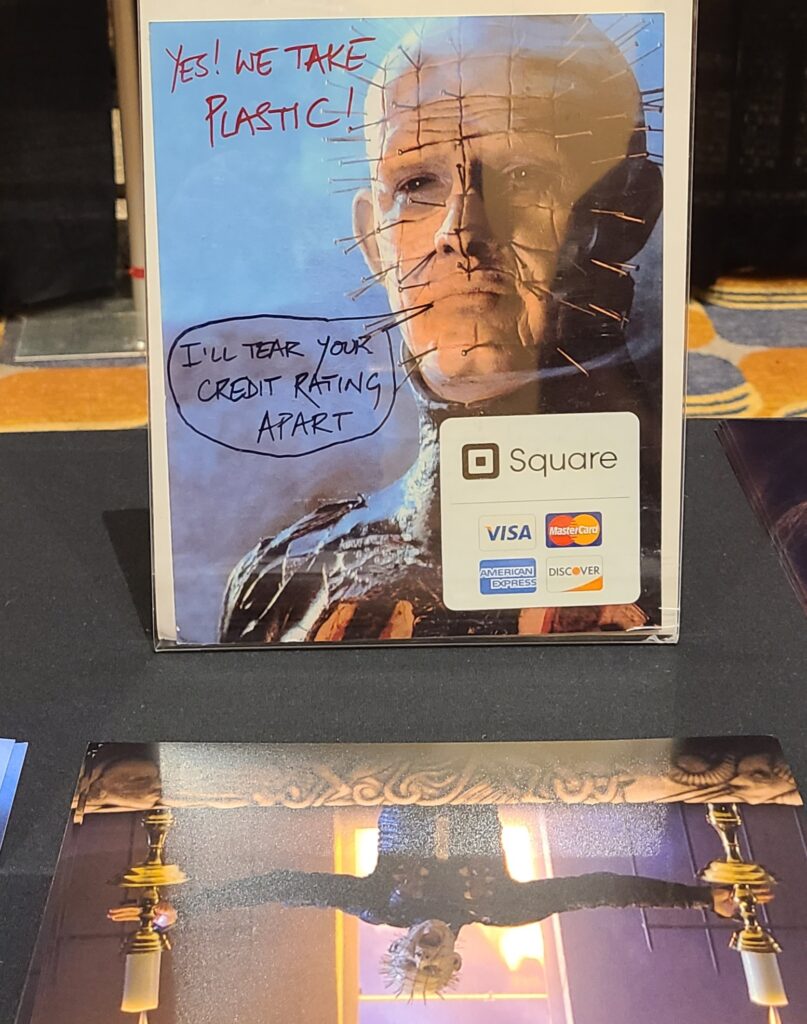 One of my favorite scream queens, Danielle Harris, was in the building all weekend. Known for her role as Jamie Lloyd in the Halloween series when she was a kid and more recently for her awesome work as Marybeth Duston in the Hatchet series, she has literally grown up in the horror community. The thing we love about Danielle is that she truly loves the fans and the genre. We had to stop by and say hi! 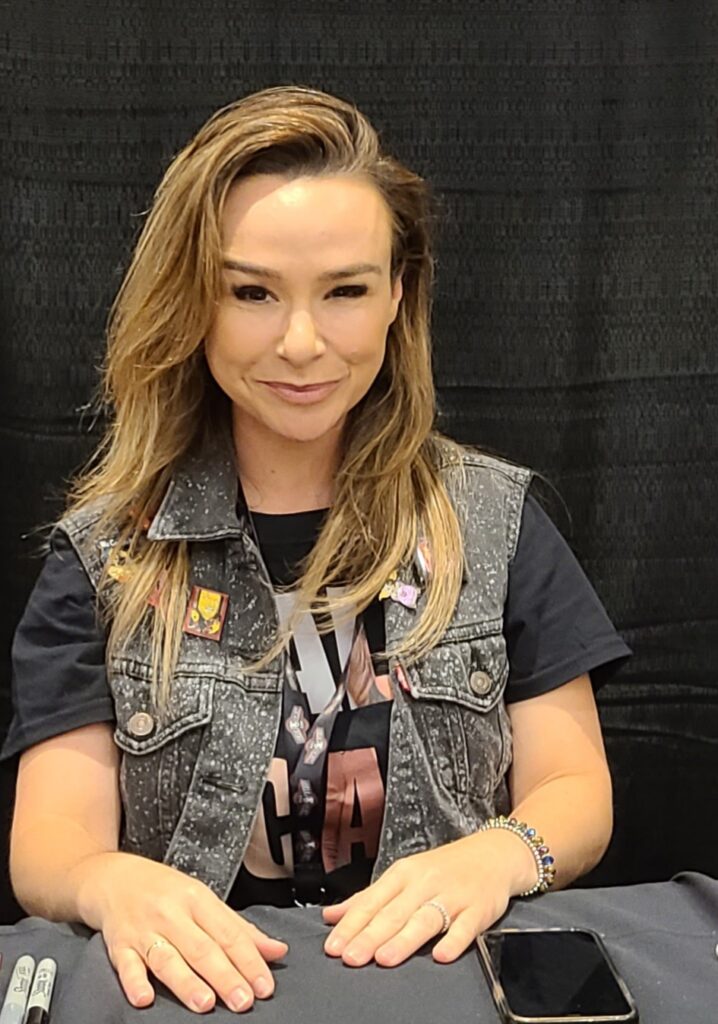 Speaking of scream queens … Ladies, and gentlemen, Felissa Rose! Known best for traumatizing me as a child with her role as Angela in Sleepaway Camp, she now has over a hundred IMDB credits to her name. Most of them are horror! Felissa is awesome and was nothing but smiles the entire time! 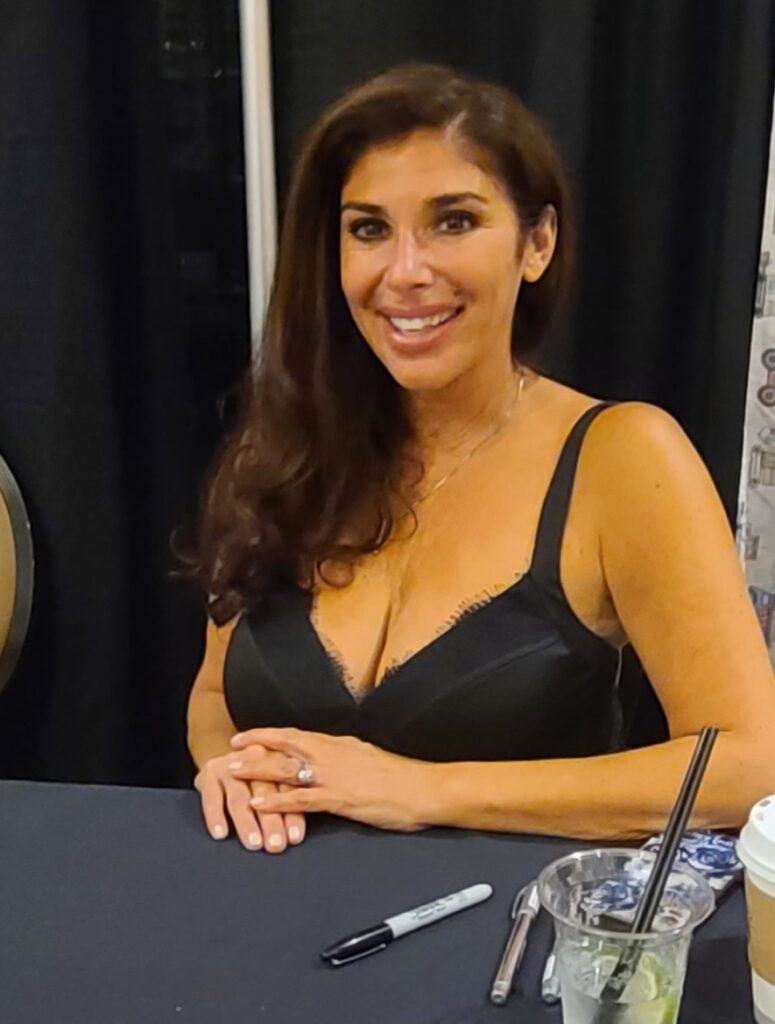 One of our favorite slashers, Felissa Rose of “SLEEPAWAY CAMP.”

Nick Castle – The Shape! The OG Michael Myers was lurking about, and he’s a super nice guy. We got to swing by and say hello!  He was doing meet and greets and signing, but he wasn’t at his booth. The deal was this: You would stand at his booth, and he would watch you from afar. (I’m just kidding! He was totally at his booth. Had quite a line, too!) 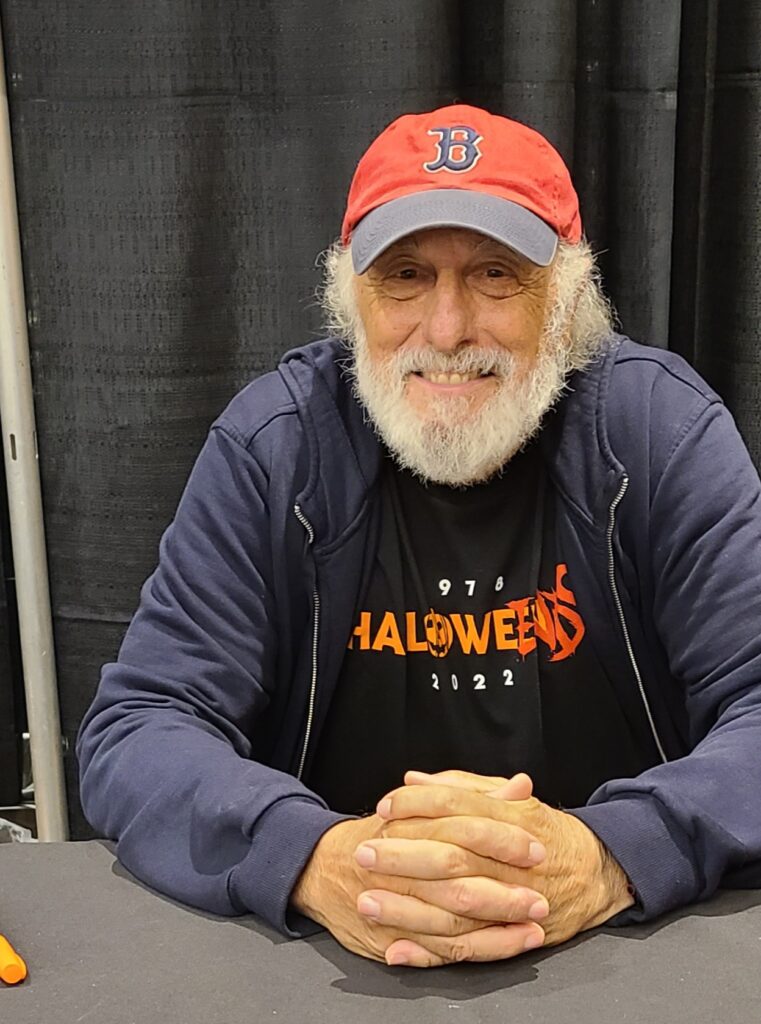 The original Shape himself, Nick Castle from “HALLOWEEN.”

We got to meet Ari Lehman, the first Jason! He portrayed Jason Voorhees as a kid in the original Friday the 13th. He wanted to let everyone know what he’s been up to, so he gave us a signed record by his band First Jason. Check them out! Ari was a riot, hamming it up with the fans the whole time. He’s a really cool guy. He was on his feet most of his time there, and yes, that is a real axe. 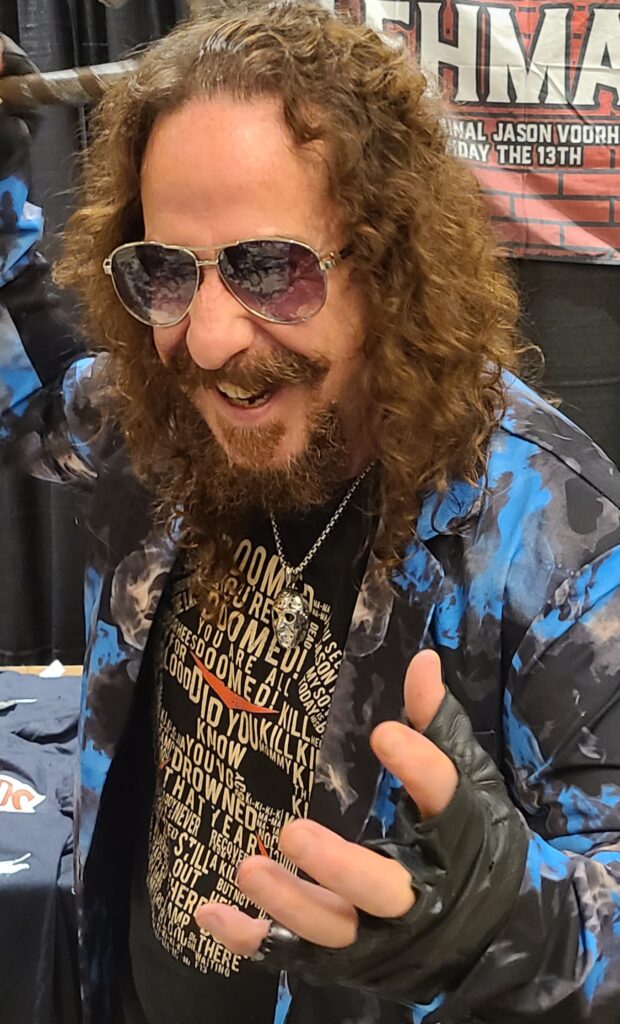 We also got to chat with comedian and actor Jamie Kennedy for a bit. Best known for his role as Randy Meeks in the Scream franchise and as B-Rad in Malibu’s Most Wanted, I’ve interviewed Jamie a few times, and he is always hilarious. He took my phone and snapped this selfie for you guys! He also let me know he’s got some stuff coming up, but we’re going to talk about that at a later date.

Douglas Tait was there, hanging out. He played Jason Voorhees in the final scene of Freddy vs. Jason. You know – when Jason is holding Freddy’s severed head? He also doubled for Michael Myers in Halloween Kills. He was also the werewolf in Annabelle Comes Home. 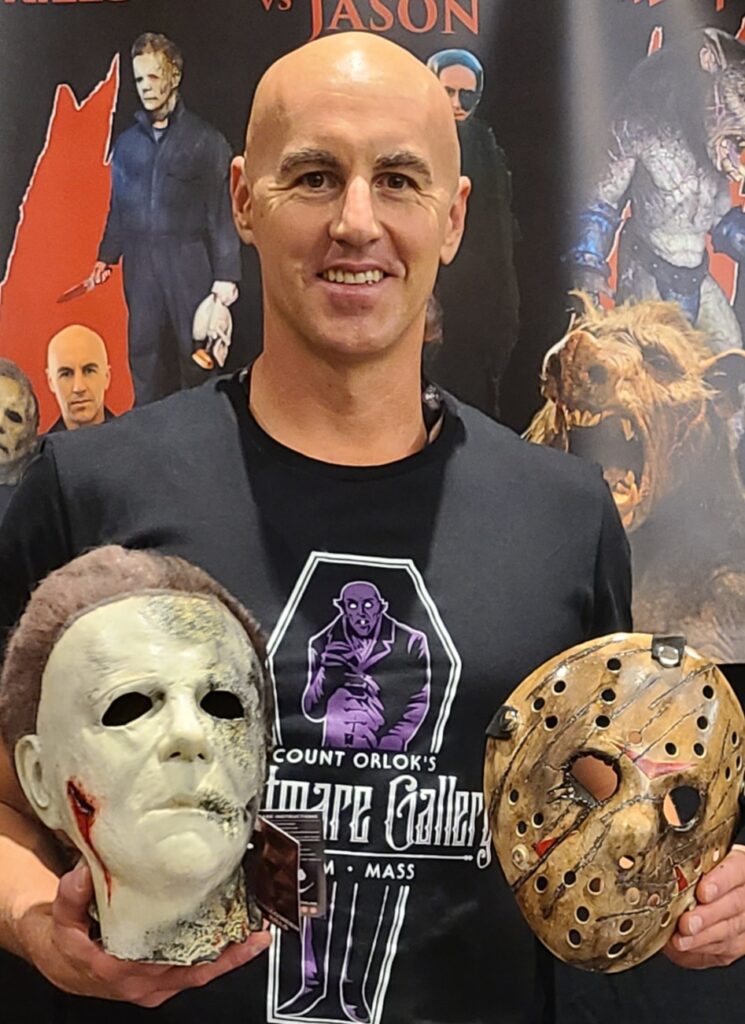 Twizted was in the house. They were there to perform at the concert along with Intimate Ink but were also hanging out and meeting fans. Hailing from Detroit and embracing the horror community since the late ’90s, the hip-hop duo has been around forever. They were definitely having a good time. 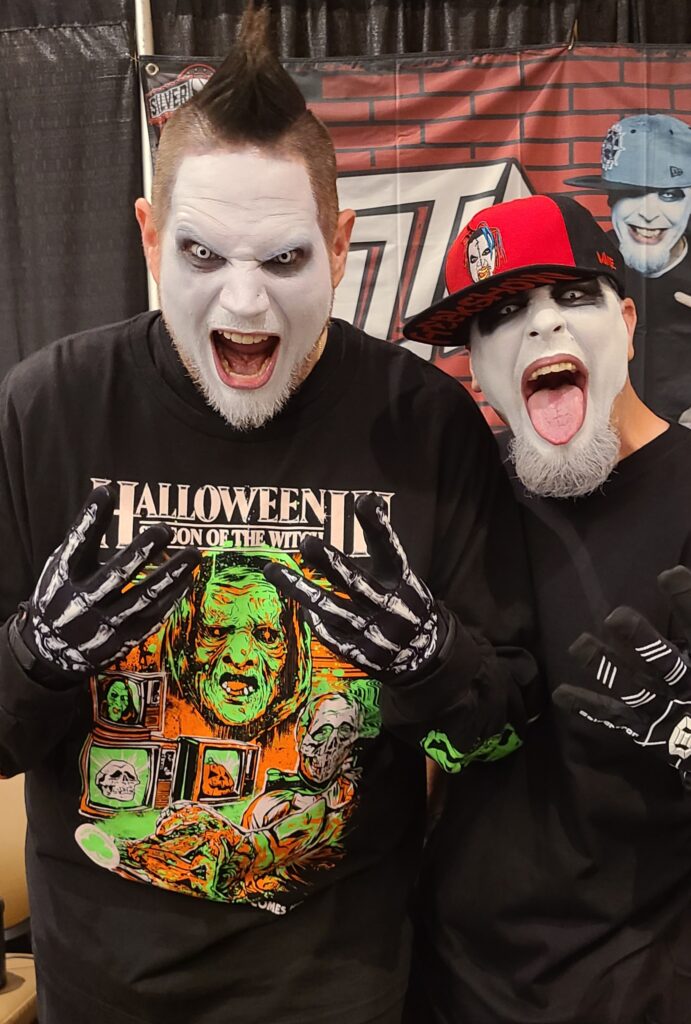 I didn’t get to everyone there. Also in attendance were, in no specific order, Kane Hodder (Jason Voorhees);  Andrew Byniarski, who played Leatherface in 2003 The Texas Chainsaw Massacre remake; Dave Sheridan, who played Doofy in Scary Movie; Chris Owen from The Mist and American Pie and Ricky Dean Logan from “Freddy’s Dead. James Jude Courtney who played Michael Myers in both the 2018 Halloween and 2021’s Halloween Kills was in attendance. He will be reprising the role in 2022’s Halloween Ends. Spencer Charnas from Ice Nine Kills was also there doing his thing along with a few others.

There were also several panels and some really cool photo shoots, including ops with Kane Hodder in costume as Jason, Andrew Byniarski dressed as Leatherface, and a bloody photo shoot featuring Danielle Harris!

Overall, I had a blast at the 1st Annual Silver Scream Con! I will definitely be attending next year, and if you can make it, fellow horror geeks, I would recommend you do the same!

Keep scrolling for a few of my favorite cosplayers over the weekend. They’re the real all-stars. 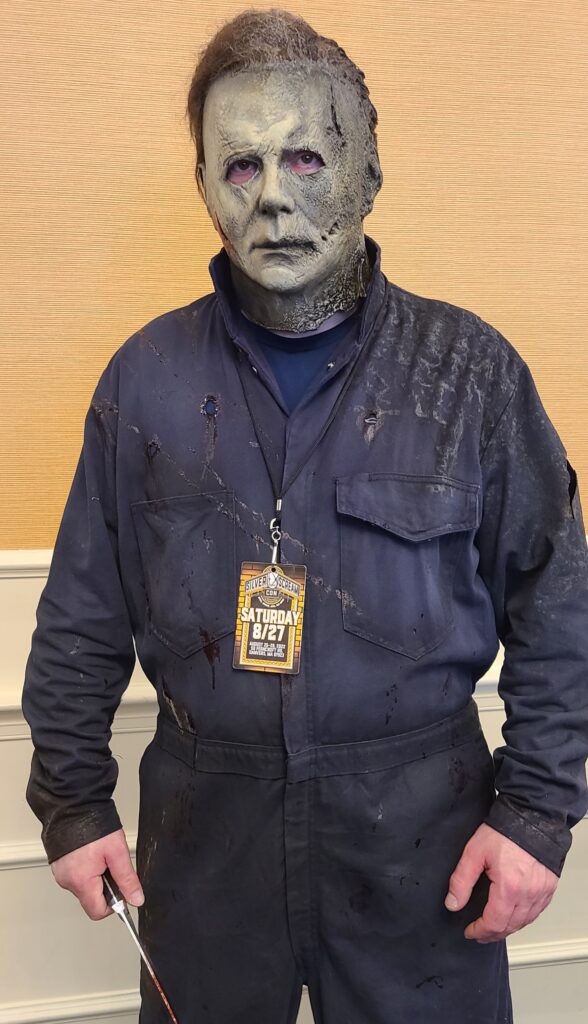 Of course, Eddie Munson was in the building! Just kidding. That was cosplayer Kenneth Pereira. Bet you couldn’t tell! 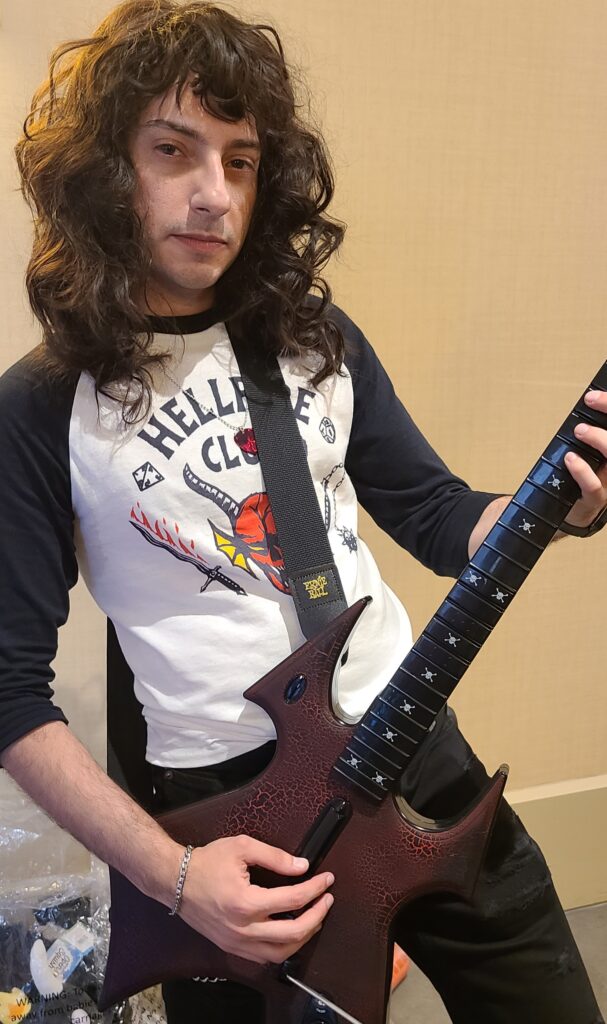 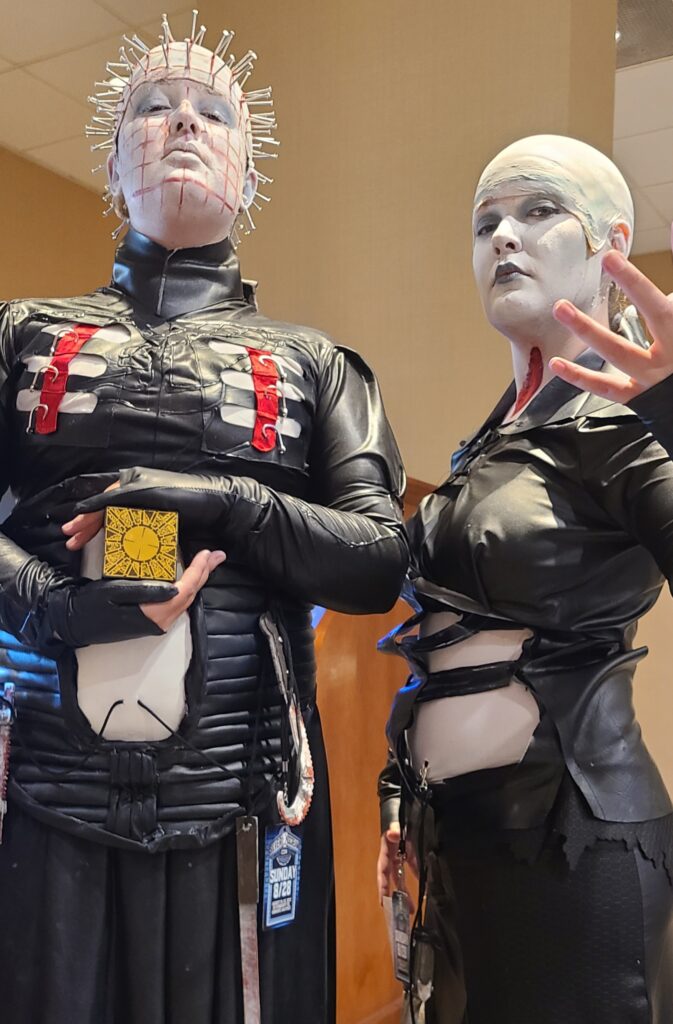 Thanks for reading, and I hope to see you next year at the 2nd Annual Silver Scream Convention!