The legendary writer/director is back in the territory where we love him the most.

Neon has released a teaser trailer as well as a poster for David Cronenberg’s CRIMES OF THE FUTURE, an “evolution” of his 1970 short film that also contains themes from his other features. Viggo Mortensen, who previously teamed with the filmmaker on A HISTORY OF VIOLENCE and EASTERN PROMISES, Léa Seydoux, Kristen Stewart, Scott Speedman, Welket Bungué, Don McKellar, Yorgos Pirpassopoulos, Tanaya Beatty, Nadia Litz, Lihi Kornowski and Denise Capezza star; the movie will premiere as an official selection at this year’s Cannes Film Festival ahead of its theatrical release in June. The synopsis: “In a not-so-distant future, humankind is learning to adapt to its synthetic surroundings. Their biological makeup changed, many humans have adapted to life with ‘Accelerated Evolution Syndrome’ thanks partly to specialized equipment that aids in everything from eating to sleeping.

“Beloved performance artist Saul Tenser [Mortensen] sleeps in a womb-like bed suspended in mid-air. The OrchidBed, as it’s called, comes complete with software to anticipate, and adjust his every bodily need. The machine even detects the growth of new organs, which Saul’s creative partner Caprice [Seydoux] can observe and tattoo in his personal operating theatre. Together, Saul and Caprice have turned the discovery and removal of these new body organs into performance art, via sold-out voyeuristic surgical shows using a sarcophagus-like machine where the surgeries take place.

“These human evolutionary changes do not receive universal positivity. Before long, a new secret government entity is established–the National Organ Registry, led by bureaucrats Wippet [McKellar] and Timlin [Stewart]–to discreetly track new organ growths, with particular enthusiasm for Saul’s artistic anomalies. With increased scrutiny on the syndrome and therefore his art, Saul is forced to consider what would be his most shocking performance of all.” 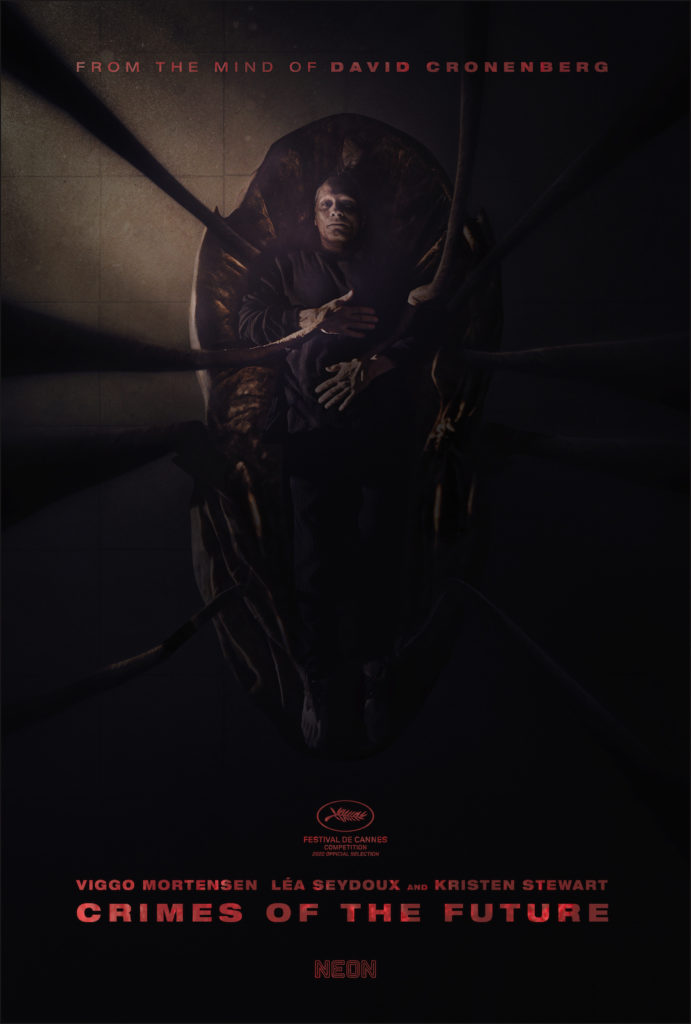