The original The Slumber Party Massacre is often mistaken for a mindless and exploitative slasher. But lurking beneath the surface of the 1982 classic is a biting satire of the genre’s tropes and a brutal indictment of the male gaze. The story is deceptively simple: a killer with a phallic weapon stalks pretty girls for no reason other than his attraction to them. Written by Rita Mae Brown and directed by Amy Holden Jones, the campy slasher confronts the audience with the ways we’ve been socialized to view women on film and effectively examines the multitude of ways they are objectified in reality. Syfy’s new adaptation, SLUMBER PARTY MASSACRE, expands on these themes and brilliantly updates them for a modern audience still grappling with its message. Written by Suzanne Keilly and directed by Danishka Esterhazy, the remake manages to outdo its predecessor with a hilarious, heartfelt, and terrifying modernization of the ways women now view each other.

Nipping at the heels of Halloween (1978) and Friday the 13th (1980), The Slumber Party Massacre plays out like a straight-forward slasher. Trish (Michelle Michaels) is a high school senior planning a girls-only party while her parents are out of town. Escaped killer Russ Thorn (Michael Villella) stalks the girls, eventually murdering them one by one with his industrial drill. Shy Valerie (Robin Stille) and her little sister Courtney (Jennifer Meyers) watch the party from across the street while friends Jeff (David Millbern) and Neil (Joseph Alan Johnson) peer at the girls through windows. Overly shaky point-of-view shots, mysterious noises that turn out to be the cat, and vapid dialogue like “I think your tits are getting bigger,” lampoon tropes that were just beginning to emerge as hallmarks of the subgenre. But Jones’s progressive message is cleverly hidden within the slasher formula and the film’s greatest achievement is the juxtaposition of who the girls want to be against the roles the story keeps trying to force them into. 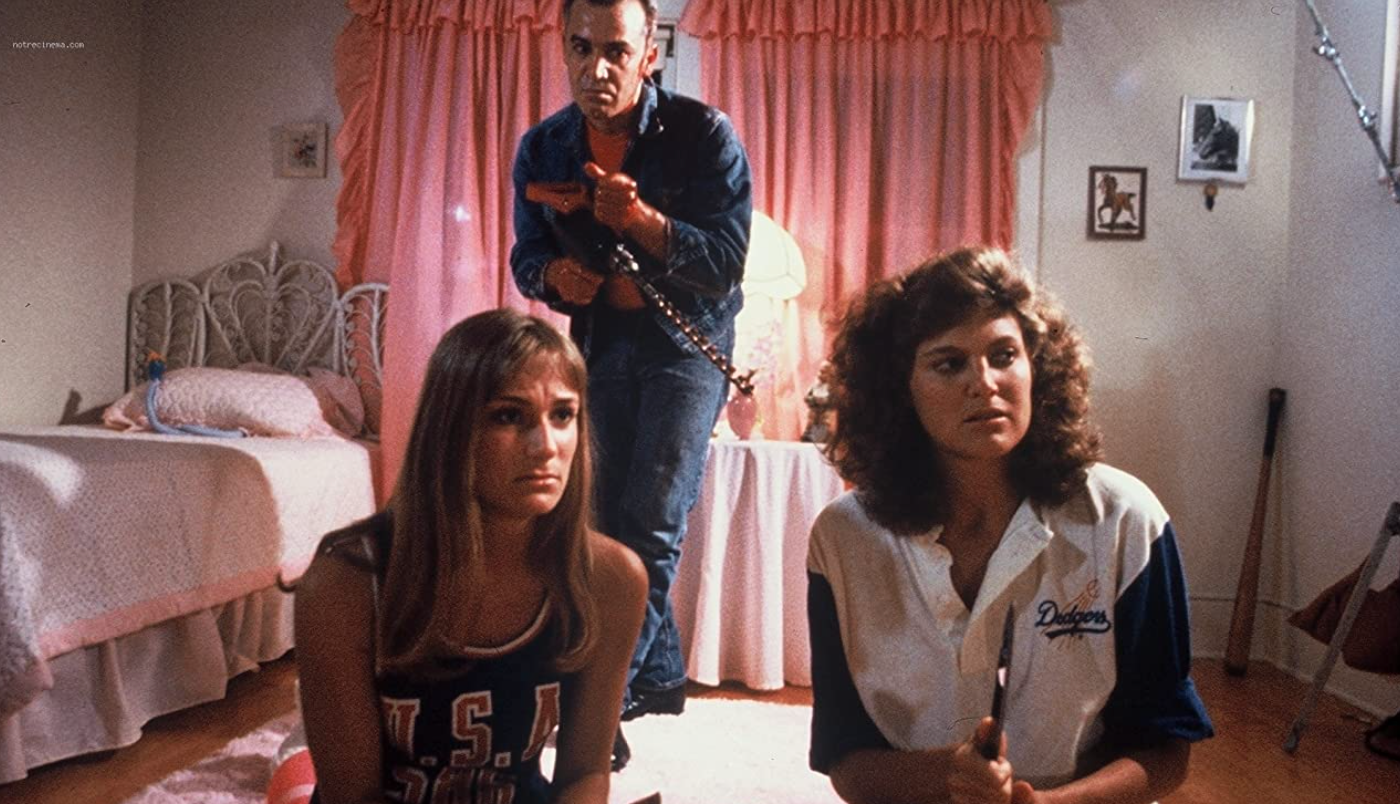 Trish and her friends have more to do than just giggle and gossip. They are strong and self-sufficient, with complex friendships and interests that do not revolve around boys. They have competitive sports rivalries and enjoy reading Playgirl magazine. Conversely, Thorn appears seemingly out of nowhere. We learn that he is an escaped convict, but essentially nothing else about him. And we don’t need to. He’s merely the catalyst for the girl’s actions rather than the center of the story. Indeed it’s the men of The Slumber Party Massacre who are disposable, and the women who save the day. Rather than a lone final girl, there are four women who survive the brutal slayings and each has an equal part in the killer’s demise.

Though the film is often misread, Jones is not subtle with her feminist critique of gendered horror tropes. The opening scene is a perfect encapsulation of a young woman’s desire to be seen as fully human while trapped in the tropes of the genre. Trish is topless before the opening credits are complete, changing into her sundress while getting ready for school. She systematically cleans out the children’s toys of her youth and leaves them in the trash outside. Most notably she throws out a Barbie doll, a symbol of the feminine ideal. Unbeknownst to her, a mysterious hand plucks the doll out of the trash can. We assume it’s the killer’s hand but we never find out for sure; the girls are ogled by so many men that it could be any one of the people who leer at them from the shadows. Perhaps the hand grabbing the barbie doll is meant to represent the audience conditioned to see Trish as a victim instead of a person. Later we see this same Barbie mutilated and posted in a window where Trish will certainly find it foreshadowing her violent fate and the dehumanized role she will play in the massacre to come. 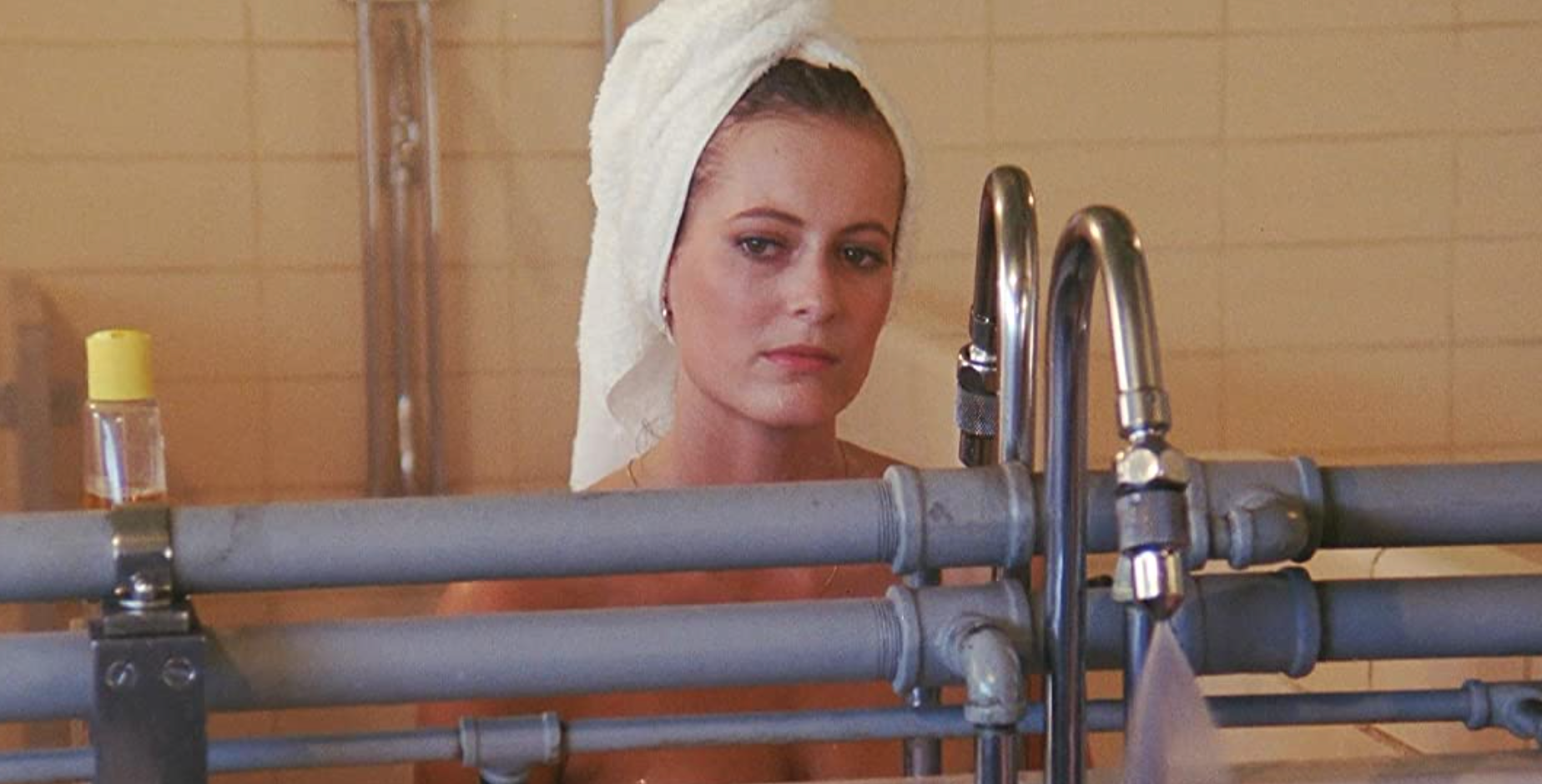 The genius of The Slumber Party Massacre is that it confronts us with what we believe we want from slashers, perpetually reverting to a misogynist lens when watching female characters. In an unabashedly gratuitous shower scene, the girls clean their bodies after a basketball practice in which they are ogled by their friends Jeff and Neil. They run their hands slowly over their soapy bodies while talking about sports as the camera pans up and down, lingering on Trish’s rear. Often misread as exploitation, Jones rubs our noses in what we’ve been trained to expect from our slashers, seemingly saying, “You want nudity? Here ya go, you sicko.”

And then we have our killer, a personification of incel culture so on-the-nose it’s almost painful. Thorn’s weapon is a drill, a large phallic tool that he pushes in and out of his victims. He kills anyone who gets in his way, but he specifically targets pretty girls. Seeking to terrorize them, he poses the bodies of his victims for shocking effect. When he does finally speak in the final scene, his words are chilling, “You’re pretty. All of you are very pretty. I love you. It takes a lot of love for a person to do this. You know you want it. You love it.” Thorn uses the language of rapists and sexual predators indicating that he views these girls as characters in his own fantasy rather than human beings. Just like the audience, he has created a narrative that glorifies the destruction of their bodies while dismissing their humanity. He is felled by a machete, another phallic weapon, that cuts through his drill, symbolically castrating him. Valerie also severs the hand that took Trish’s Barbie at the beginning of the film, symbolically punishing him for attempting to reduce her to a mindless body. 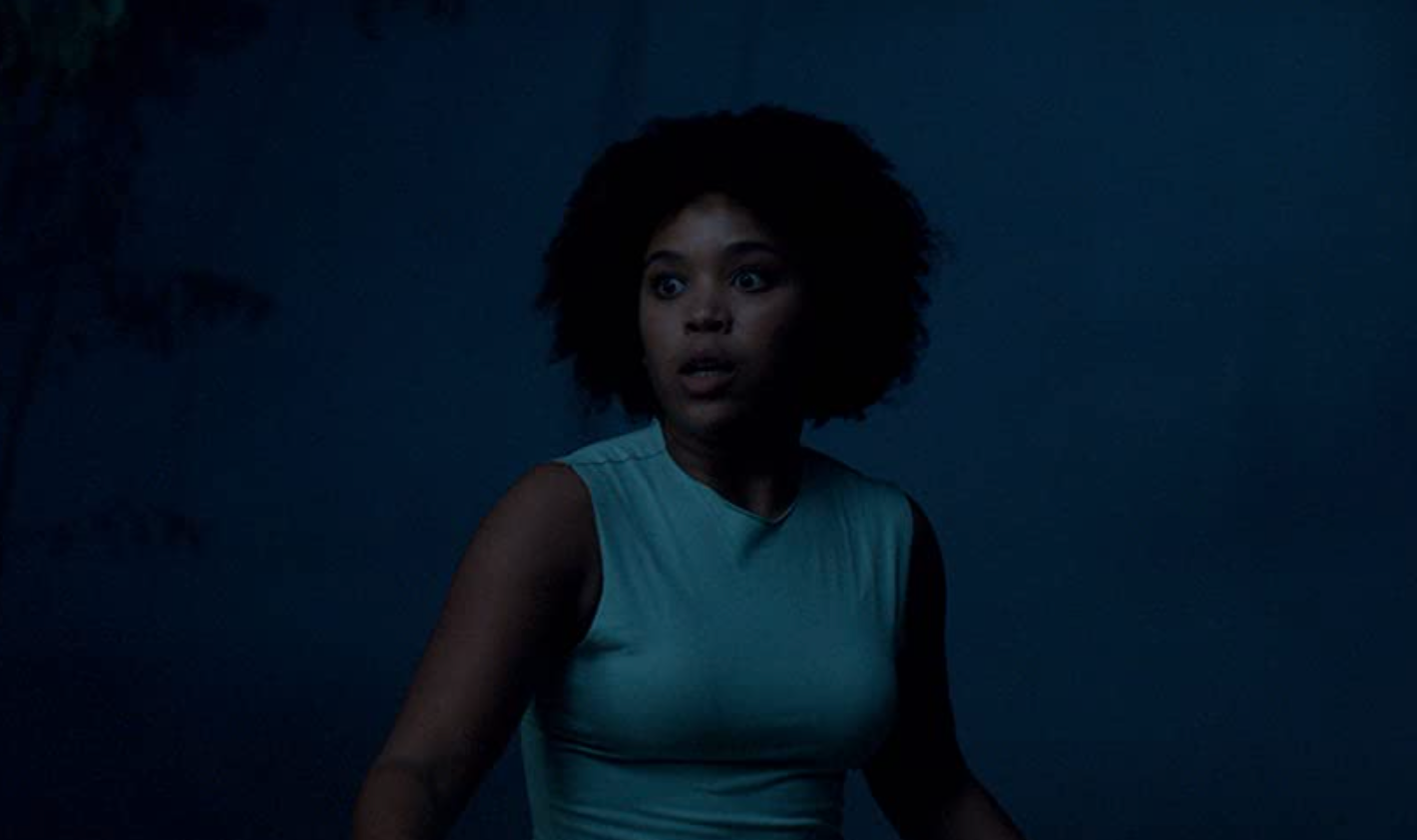 Syfy’s new update takes all of Brown’s subtext that’s so often lost in translation and makes it explicit. Dana (Hannah Gonera) and her friends Maeve (Frances Sholto-Douglas), Ashley (Reze-Tiana Wessels), Breanie (Alex McGregor), and Alix (Mila Rayne) are on the way to a cabin in the woods for a girl’s weekend when their plans go awry due to car trouble. They must stay at the same lake where, years ago, Dana’s mother Trish (Masali Baduza, Schelaine Bennett) was the sole survivor of a…slumber party massacre. She was attacked by the driller killer Russ Thorn (Rob van Vuuren) and managed to fight him off though all of her friends were killed. Russ’s body was never found and Trish was left with a scarred hand and a bad case of agoraphobia. What initially seems like a straightforward parody shifts midway through the film when Thorn returns and we realize that the girls have orchestrated the party to draw him out and kill him once and for all, exacting revenge for all the pain he’s caused Trish and womankind.

Nods to the original are both plentiful and delightful. The ditzy comments, overly sexual outfits, and feigned helplessness lovingly lampoon the original film in the same way Jones’s film lampooned its contemporaries. Visual details like a tiny “Space Baby” t-shirt and a bright red electric guitar are sweet winks to fans. Esterhazy draws out the audience with these loving homages just as the girls in turn draw out the killer with their scantily clad dance parties and “stupid” drinks. Thematic callbacks abound as well like the lovably obnoxious little sister, the overuse of fakeout jump scares, bodies hiding in freezers, and screaming knife attacks. But all these nods to the original feel organic, complementing the story’s natural arc rather than overtaking the narrative

The best references occur when Esterhazy gender swaps clichéd and misogynist tropes of the subgenre, spelling out the subtlety of Brown’s original script. A group of guys at their own cabin across the lake dance topless in a rain of feathers, seductively spraying beer all over each other. Ashley’s question, “Is this what guys actually do when they’re alone?” is both hilarious and an echo of the countless times men have asked that when presented with a nymphlike visage of female bonding specifically geared to entice male audiences. Of course it’s not what guys do when they’re alone. It’s also not what women do. Duh.

The clearest example of this subversion is a hilariously gratuitous shower scene, this time starring a male character. The camera spends just as much time ogling his naked and sudsy body as it does the girls in the original. Esterhazy dares us to feel uncomfortable with so much nudity then asks why it’s ok on a female body but not a male one. Once again, the female characters are competent and loveable while the male characters are vapid and disposable. Two are even named Guy (Richard White) and Guy 2 (Braeden Buys), a hilarious nod to the many conversations meant to distinguish poorly defined female victims in countless horror films. 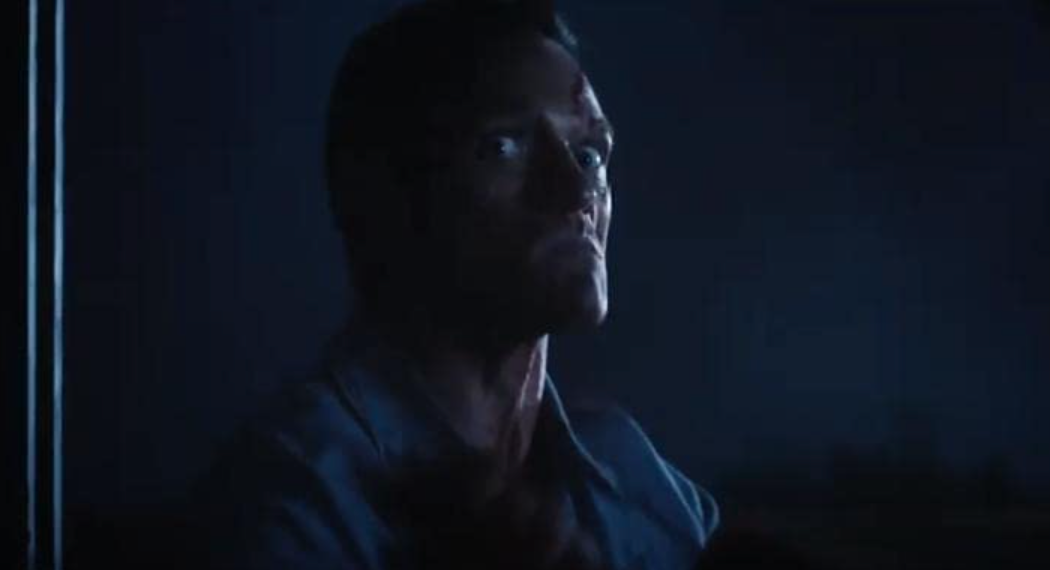 The girls do manage to vanquish the driller killer and it’s after this supposed climax that Esterhazy makes her most effective point about rape culture by indicting the women who support it. A second killer, the friendly Kay (Jennifer Steyn) who rented them the house is revealed to be Russ Thorn’s mother (wink, wink Mrs. Voorhees) who blames the girls for Russ’s death. If they hadn’t been so visually appealing, if they hadn’t been frolicking so enticingly, he wouldn’t have been tempted to kill them. Kay represents the millions of women willing to sell out their own gender by supporting predators who make their lives more comfortable. They’re willing to excuse even the most reprehensible behavior because they are not the ones being targeted.

Dana confronts this devastating societal truth by rejecting the premise that she and her friends are deserving of their fates. Simply existing as a woman comfortable with her body is not a crime punishable by death. She insists she and her mother have done nothing wrong and demands to know why a grown man like Thorn is never held accountable for his actions. When did it become so hard to expect men not to victimize women? It’s a beautifully written and cathartic moment that feels like a primal scream from generations of female rage.

Esterhazy also makes a compelling indictment of true crime culture and the way podcasts of their ilk exploit true stories of tragedy while leaving behind the victims they claim to uplift. She eviscerates the murder obsessed society that sees real women’s bodies as simply that, bodies to be torn apart for our entertainment under the guise of prevention and empowerment. Kay bemoans the murder tourists who flock to scenes of real life tragedy out of morbid curiosity. And though her intentions are sinister, she’s not wrong. Having grown up the daughter of a survivor, Dana knows the human toll of that misery and soon the guys will too.

The original THE SLUMBER PARTY MASSACRE is a fantastic piece of feminist filmmaking that too often flies under the radar. If it has a flaw, it’s that the slasher elements are so effective that they often overshadow it’s satirical message, and Syfy’s update makes these veiled implications impossible to ignore. Esterhazy’s film is a terrifying, funny, heartbreaking, and ultimately empowering re-telling of a story about women, by women, and for women. The original film confronts the way the world has been trained to see us, while the remake confronts us with the ways we see ourselves – daring us to ask for more.

SLUMBER PARTY MASSACRE is streaming now on the SyFy app.