To celebrate the 200th publication anniversary of the legendary novel Frankenstein, celebrated sculptor Bryan Moore is donating a life size bronze bust of Mary Shelley to the Museum of Pop Culture (MPoP) in Seattle, Washington on August 30, 2018.

Moore been hard at work the last six months sculpting, but he needs your help to get his project across the finish line.

This is the second of three busts that Moore has donated to the MoPOP; Dracula author Bram Stoker was unveiled in October, 2017, Mary Shelley will be installed on her birthday on August 30, 2018, and Rod Serling will be unveiled in 2019 to celebrate the 60th anniversary of The Twilight Zone. His other work also includes bronze busts of H.P. Lovecraft and Edgar Allan Poe. 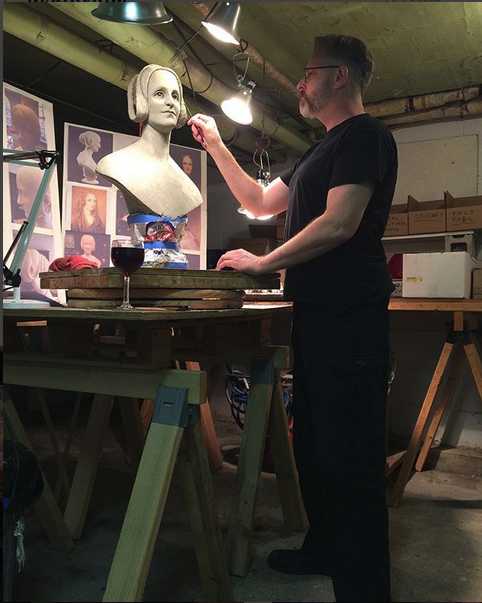 Moore has been a sculptor in the film and toy industry for over thirty years. His sculptures are in the permanent collections of the Providence Athenaeum Library, Boston Public Library, Los Angeles County Museum of Art, Minneapolis Institute of Art, and as part of Guillermo del Toro’s exhibition At Home with Monsters.

“One of the privileges of creating the author bust series of iconic works of horror is to bring more attention to their magnificent work for the next generation of fans. Starting with bronze tributes to H.P. Lovecraft, Edgar Allan Poe and Bram Stoker, which I’ve placed in libraries and museums across the world,” says Moore. “I felt it was long overdue to celebrate the godmother of horror fiction in the form of a bronze bust. Without Mary Shelley there would be no horror genre as Frankenstein remains unchallenged as THE pioneering work of the horror genre.”

Since there are no photographs of Mary Shelley, Moore’s primary reference for her likeness was the famous Richard Rothwell painting of 1840 and the Camillo Pistrucci marble bust of 1843, both created in her lifetime as she likely sat for both artists.

“It my sincere hope that my interpretation of her honours her and does her legacy justice. I hope my fellow Mary Shelley fans approve of my humble efforts and help me to place her bronze bust at MoPOP on her birthday on August 30, 2018,” says Moore.