So… I know I said I was going to be reviewing a film off Hulu next, but, well, I saw HOST. And I wasn’t planning on doing a writeup for the column; I have periods where I cover new releases from Shudder, and then outside of that I try and dig for the hidden gems, stuff that maybe gets buried at the bottom of the queue. But as I was watching the film, I got the sense that I sometimes get where a writeup, one way or another, was inevitable; so I decided to just stop fighting it, take a brief intermission in my (ahem, poorly) planned curriculum, and write about the first film of 2020 to really, truly scare me.

The first thing you need to know about HOST is that it’s premise is deceptively simple: a group of friends meet over zoom in the middle of the pandemic to hold a virtual seance, the first of its kind. This get together was orchestrated by Haley (Haley Bishop), who begs her friends to be respectful of the process, not offending either the visiting spirits or the medium she asked to guide them through it, Seylan (Seylan Baxter). Naturally, though, her friends ignore her request, taking shots every time Seylan says astral plane and even going so far as to fabricate experiences; Emma (Emma Louise Webb) constructs a story about a classmate that hung himself, pretending that he’s choking her. What she doesn’t realize, and what the group will soon find out, is that that kind of flagrant disrespect opens the door for a more malicious entity to take the stage. Don’t disrespect the spirits, kids.

“HOST is the first of it’s kind, filmed from quarantine and mining the anxieties created by the pandemic to maximum effect.”

The main point of this writeup, if there is one, is that we need more films like this. Watching this was at once the most refreshing and horrifying thing I’ve seen all year, because this was the first film I’ve seen that explicitly addressed the pandemic. I was able to relate to this film on a level I haven’t with any other film since the coronavirus pandemic hit, and it was able to mess with me in ways other films haven’t, because this is the first film to adequately exploit the anxieties and challenges the pandemic caused. Being trapped in one’s own home away from support structures, your only connection to them being a shitty face-cam and a wi-fi connection that drops every five minutes or so, all the while being slowly drained by the day to day process of existing in a global emergency, mind warring between boredom and anxiety; it is amazing, frankly, that it took this long for that situation to be addressed. And the true genius of HOST is that they took that vulnerability and wove it into the very rules themselves: the circle of protection is inherently fragile (since they aren’t all in the same room), the characters are emotionally weaker than they should be from lockdown, it’s easy to separate them (the leader of the séance is spiritually hung up on at least two, three times) and prey on them individually, and the physical distance between the characters makes it almost impossible to come to their aid when the bad stuff really goes down. Moreover the characters are all likeable and relatable, unlike the characters of the first Unfriended, and so there’s a real sense when you’re watching this movie that you aren’t watching this happen to a group of random people; you’re watching it happen to yourself and those you care about. 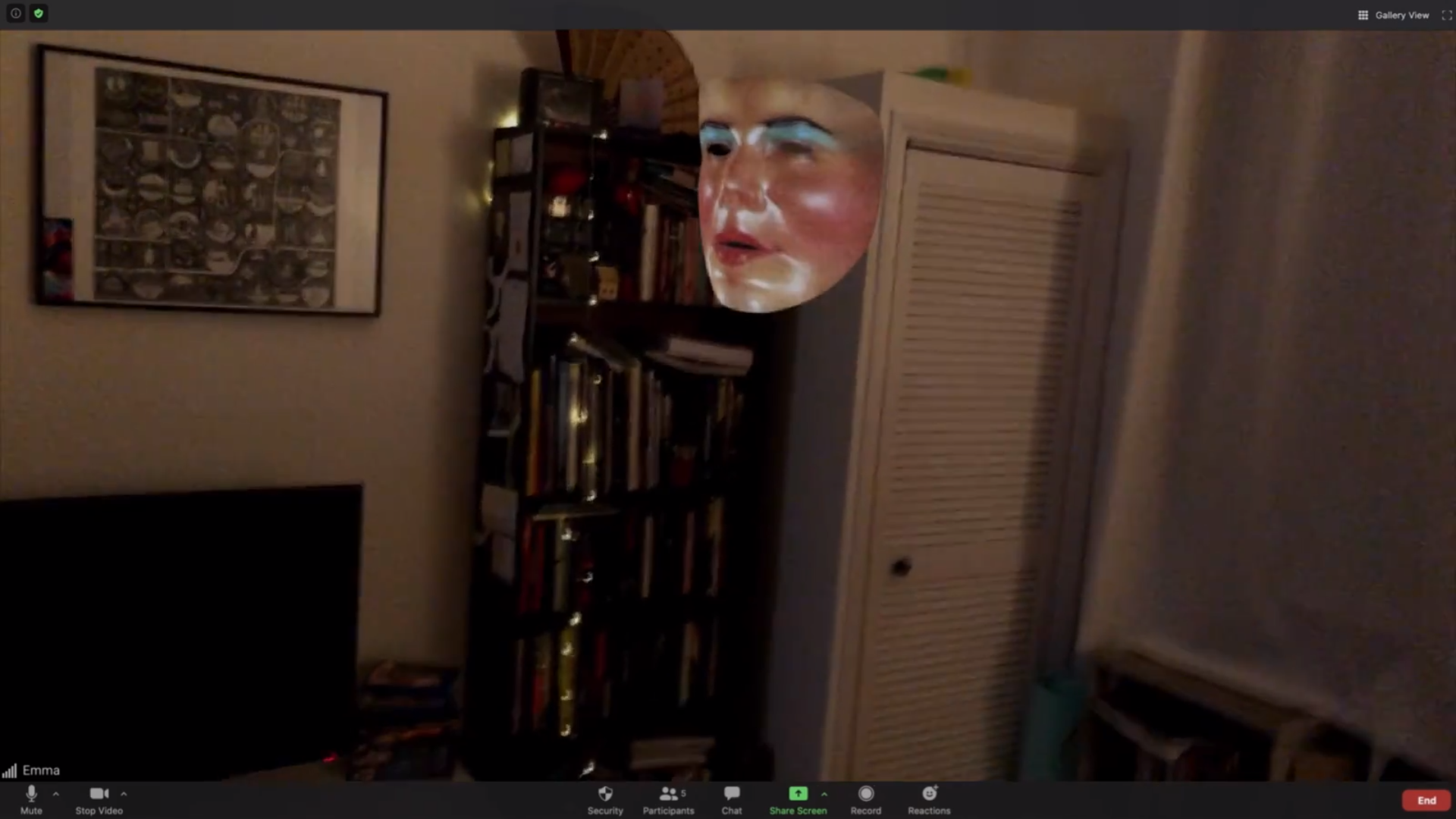 Let me take a second to revisit this nameless spirit, this demonic thing that uses a construct as a mask to trick or treat at each cast members’ apartment. At times, you won’t be able to see anything more than a ripple in the corner of the screen, or you’ll hear a noise coming from a pitch-black hallway in the background before a character gets dragged away. At times, you’ll see someone’s facial recognition software “acting up,” or a character will take a picture and reveal just a little more than a silhouette. And then at times, all you’ll see before the screen goes black is something that’s all blood, bone, and rage. Every trick in the book is used to the spirit’s advantage, but it feels planned and very explosive; more than Toby from Paranormal Activity (who made keys fall… repeatedly… and was all like “hey Satan, you proud”) and other antagonists from the genre, the spirit feels like a fully aware, intelligent, and malicious character in its own right. Moreover, this spirit doesn’t play: there’s no gradual acceleration of spiritual shenanigans that becomes more serious over time like one would see in other (more basic) paranormal genre films. This creature takes a second to announce itself and then dials things up to 11, tearing through the cast in brutal, sadistic fashion. Combine that with the calculated, slow reveal of what this creature looks like and the diversity of the attacks shown onscreen, and you have a poltergeist more terrifying than 90% of what’s in the genre to date. If this character was used as an antagonist outside of the setting of the pandemic, it would be every bit as terrifying, and that’s the highest compliment I can give it.

I could go on and on about this film and how it’s the first to make me truly anxious this year, how the film’s short runtime makes it’s audience feel as if they’re in a pressure cooker and allows the demon to really get to work on it’s cast. But I’ve basically hit my word count, and I’ve already made this film sound like it’s the best thing to come out since sanitizer was restocked in stores.

And aspiring filmmakers out there; please, please make more like it.