This one is going to be a little different than what we usually cover here in the Sematary, but it was such a unique opportunity that I just couldn’t bring myself to pass it up. When I saw that Shudder had released the ETHERIA FILM NIGHT SHORTS showcase for 2020, I decided to give it a shot, to treat it a little bit like a non-themed anthology film and see where it took me. And holy shit am I glad I did, because this showcase hits on such a diverse set of subjects, subgenres, and real-life horrors that it’s more than worth your time: it’s required viewing for the socially conscious horror nerd.

Most anthologies (or showcases) are a bit of a mixed bag; certain segments tend to hit harder than others, while some just wind up being outright skippable. ETHERIA is the exception to the rule. There wasn’t a single segment I saw where I thought anything like “wow, that was disappointing.” Sure, there were certain segments that I thought weren’t 100% my thing, like the short “Offbeat,” which takes place in a dystopian future and comes off a little bit like a Black Mirror short; but “Offbeat” was a solid work through and through with some interesting climate-change centric commentary and a satisfying conclusion to the main character’s arc. That’s the thing about ETHERIA: it offers a little something for everybody, covering a wide range of genres and classes of horror. You want something splatterpunky, something a little Clive Barker-esque? Check out “Man in the Corner.” You want 80’s throwback horror that explores the implications of the final girl trope? Watch “The Final Girl Returns.” I can’t remember the last time I was so excited transitioning to a new segment; every single one was quality horror with solid messaging, compelling characters, and beautifully penned plots.

“ETHERIA is a near perfect non-themed anthology, required viewing for the socially conscious horror nerd.”

In this column, I usually break down the messaging of the movies I watch and go through them as comprehensively as I can without spoilers. Here, given the nature of what I’m watching, that would be a little difficult. So what I’ll do is break down a couple of the shorts briefly and try to demonstrate what this amazing showcase has to offer.

“Waffle” is the first short in the showcase, and it depicts a world where people use apps to find and schedule appointments with people who will pretend to be in relationships with them for a price. It mainly centers on an insane waffle company heiress and her pay-to-play best friend as the waffle heiress gets increasingly unstable. This one is half Hitchcock, half Black Mirror.

“Basic Witch” is a story that forces a man to go through what a woman goes through when her boundaries are violated and consent that is withdrawn is ignored. It’s poignant, powerful, and (this is a warning to anyone who might be negatively affected by seeing this subject dealt with) dissects the issue thoroughly but entertainingly.

“Man in the Corner” is one of the shorter ones in the bunch, and depicts two gay men having sex when they are suddenly joined by an obese old white guy, who tries to force himself into their relationship. The moral of this one is (without spoilers) sometimes you think you’re only dating one person… and you’re really dating two. It’s Jekyll and Hyde a la Hellraiser.

Lastly, “Maggie Mae” is about responsibility, dysfunctional families, and in particular that one family member you have who doesn’t do jack shit. If gluttony and sloth were sins personified, that personification would look like Maggie Mae, and this short is as infuriating as it is horrifying. I swear, if I had to hear “I DIDN’T DO ANYTHING” one more time… 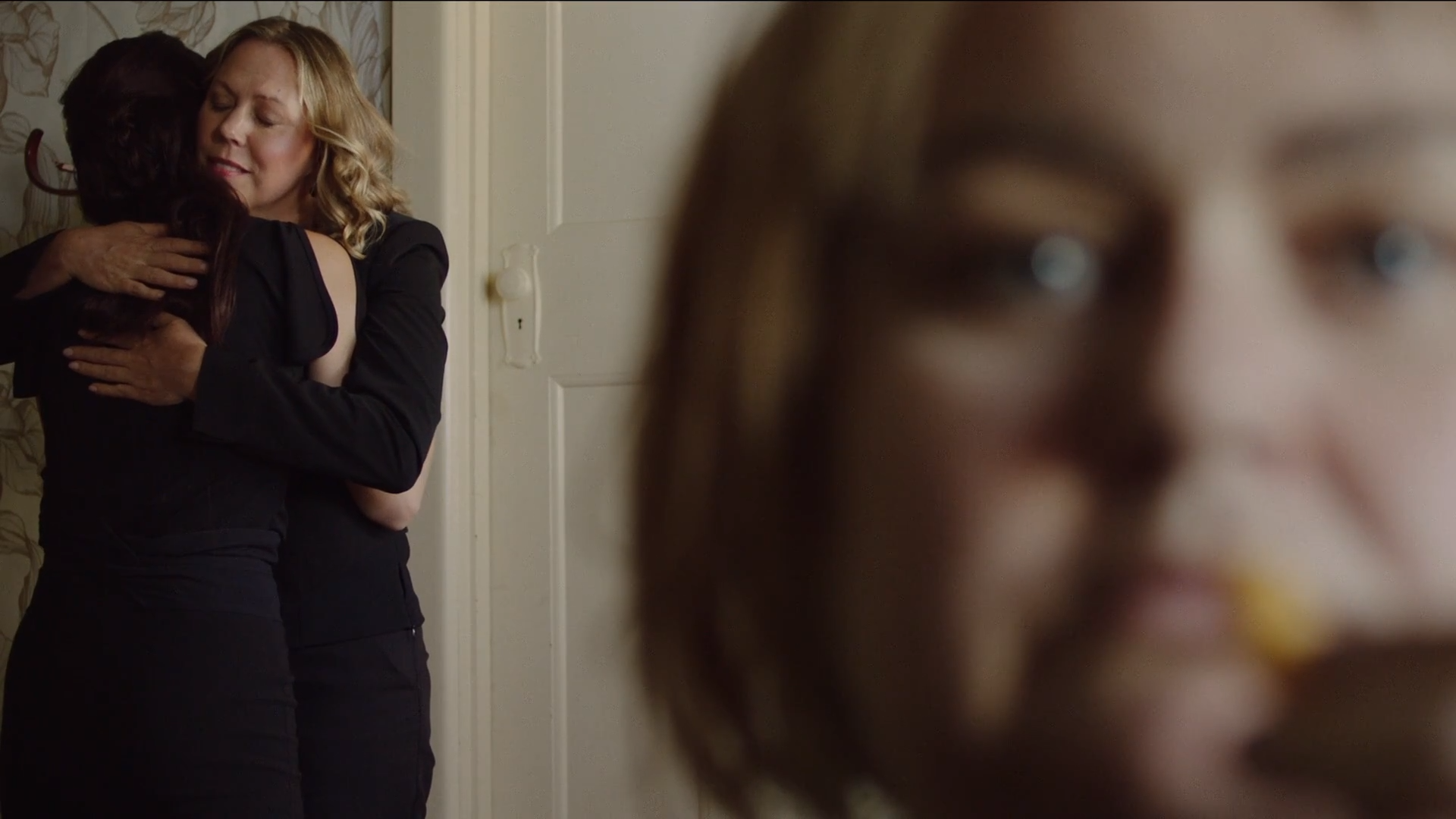 This is a near perfect collection of short films that touch on a wide spectrum of social issues in ways that are mostly innovative and nearly always entertaining. Where ETHERIA may lose some viewers is one or two of the segments feel a bit more on the nose than some others, more preachy than entertaining: I would reference “Offbeat” and “Live” as examples of segments that aren’t bad by any stretch of the imagination, but feel a bit more didactic in nature. And with all anthologies, some viewers will like certain segments better than others; despite how well ETHERIA works AS a non-themed anthology, everyone will find their own weak segment. For me, that’s “Offbeat;” while the film’s individualistic message is a good one, it’s hardly new for the dystopian genre, and very little about “Offbeat” sets it apart from it’s contemporaries. The ending where the protagonist breaks the mold, using his mad drumming skills to win a challenge before getting disqualified anyways feels a little juvenile to me, something out of a Young Adult novel. Not everyone will agree with me, and I still think there’s quite a bit of value in it’s messaging; not everyone is built the same, and different social apparatuses often fail to recognize that and make room for it. I just didn’t enjoy it quite as much as the other segments.

I’m giving ETHERIA a 9 out of 10. It’s one of the best things Shudder has added to their library in a long time, and I hope they acquire more like this in the future.