“Stranger by the Lake” And The Irrationality of Desire

I applaud anyone who can chill out at a nude beach, but I always find myself reaching for more: more towels, pants, a shawl, a trash bag, anything to help me disappear into the sandy dunes on Fire Island. Alas, we are not on Fire Island. We’re in France, in the surreal and stimulating world of Alain Guiraudie’s 2013 horror-thriller STRANGER BY THE LAKE (L’Inconnu du lac).

Franck (Pierre Deladonchamps) is an unemployed former grocer who spends his afternoons cruising at the most tranquil nude beach in a part of France that seems to hold all-time in suspense. After witnessing a murder, Franck engages in a steamy dalliance with the killer, Michel (Christopher Paou). The film also stars Patrick d’Assumcao and Jerome Chappatte, and is written by Guiraudie. Music by no one (but in a good way).

I love this movie. For a thriller, it’s so refreshing because STRANGER BY THE LAKE never seeks to trick you. You know from the jump that Michel is the killer, and not only do we the audience know, but we the audience know that our protagonist knows. We know that Michel will kill Henri (Patrick d’Assumcao). Hell, even Henri knows he’s going to bite it. He walks right up to the killer, confronts him about his murder, then announces his plans to take a walk in the woods. That’s like showing up at Smith Grove to tell Mikey you’re his second cousin once removed.

I picture myself as Lady Gaga at the top of “Dance in the Dark” when I am describing this movie to friends. But instead of “Silicone… saline… poison… inject me,” it’s “French!… Murder!… Gay!… Do me!” This little francophile gets everything he wants in a movie, except perhaps a banging musical score… but the sounds of the earth are the soundtrack to this film: the shifting pebbles and rocks of the beach, the splashing about in the lake, the sex grunts. A weird realization sparked by this film as a lame American is that I’ve never been to a beach in France or a beach anywhere that isn’t composed primarily of sand. The rocks threw me, and how all the men were naked except for their sneakers because rocks hurt. What’s great about French cinema is that it makes you want a cigarette, even if no one in the film smokes. This viewing was my fifth or sixth and I kept waiting for everyone to light up but no one did. And in a brief moment of stereotyping, why isn’t anyone drinking wine? Kidding. The characters in STRANGER BY THE LAKE don’t get hungry, thirsty, no – their singular purpose at this beach is cruising, which isn’t some indictment of gay sex, but more the filmmaker’s attempt to isolate us from the outside world. Desire is currency. Desire is sustenance. Desire is blood.

Franck asks Henri, “Do you come here often?” in a nod to this cliche pickup line’s ability to transcend time and space. And speaking of time and space, when does this movie take place? It’s hard to tell. We don’t spot any cell phones, the fashion is vague enough to be mysterious, and from what we see of the cars in the parking lot, they’re all pretty beat up. It feels like this movie could exist any time between 1998 and today. When you’re unable to pinpoint an exact time I think it makes the film scarier. It’s disorienting. It forces you to question reality and your sense of history. And it speaks to the art of cruising, particularly in a world that is not post-AIDS, but is post AIDS Epidemic of the 1980s (which is less a comment on progress than it is about the literal passage of time).

“We don’t know if they prefer coffee to tea to Dubonnet…but we know their cocks.”

The people in this movie know what the threat of AIDS means, and some characters are ardent about using protection, even for oral sex, while others throw out declarations like, “I trust you” and perhaps they are the most dangerous people of all because they know the risk of AIDS, then sort of discard the history of our plague as nonessential. Everyone in this movie stalks, observes, watches. Voyeurism is to be expected. But for the way the men hunt and haunt each other, it should be noted that there are limits to the voyeurism: it only happens at the beach. No texting, no Insta, no virtual stalkage. We are permitted the smallest of windows into their lives. We never see what Franck or Michel or Henri are like when they leave the beach. We don’t know if they prefer coffee to tea to Dubonnet…but we know their cocks.

STRANGER BY THE LAKE makes me wonder how Jason would fare if Camp Crystal Lake was reappropriated as a gay cruising spot. For anyone who has had sex at NYC’s The Cock on Second Avenue, you could do a lot worse. But I did find myself thinking of Crystal Lake a lot while watching this movie, particularly the 1980 original. Sean S. Cunningham’s film creates tension through stillness and gentle pacing. Mrs. Voorhees stalks from the woods. Like the men cruising for sex in Guiraudie’s film, Mrs. Voorhees plays the voyeur before the murderess. There are some really beautiful moments as she watches the campers go swimming and as Marcie and Jack sit outside at dusk before the rain descends. The scenic calm lulls you into a false sense of security on a first view, but watching it for the 100th time, you start to think, “Wow this movie is really fucking relaxing.”

After Franck witnesses the murder, he begins fucking Michel. The movie never seeks to judge him for this batshit choice. Instead, we are lead along a path which suggests that neither Franck nor Michel had any choice because their connection and attraction transcends logic, justice, safety, ethics, etc. This movie is such a fun metaphor for ignoring red flags. My defense: but his mustache! The killer looks like Tom Selleck therefore he cannot be a threat. Right? Right? Shit.

After killing Henri and Inspector Damroder, Michel pursues Franck in the woods which once served as the backdrop to their love affair. In the last moments of the film, Franck comes out of his hiding spot and calls out to Michel. The lights slowly dim, the darkness wins, and we are left with an ambiguous ending that doesn’t totally bother me. Nothing about Franck’s behavior prior suggests that he wouldn’t behave recklessly for love or lust (and what’s the difference anyway?). 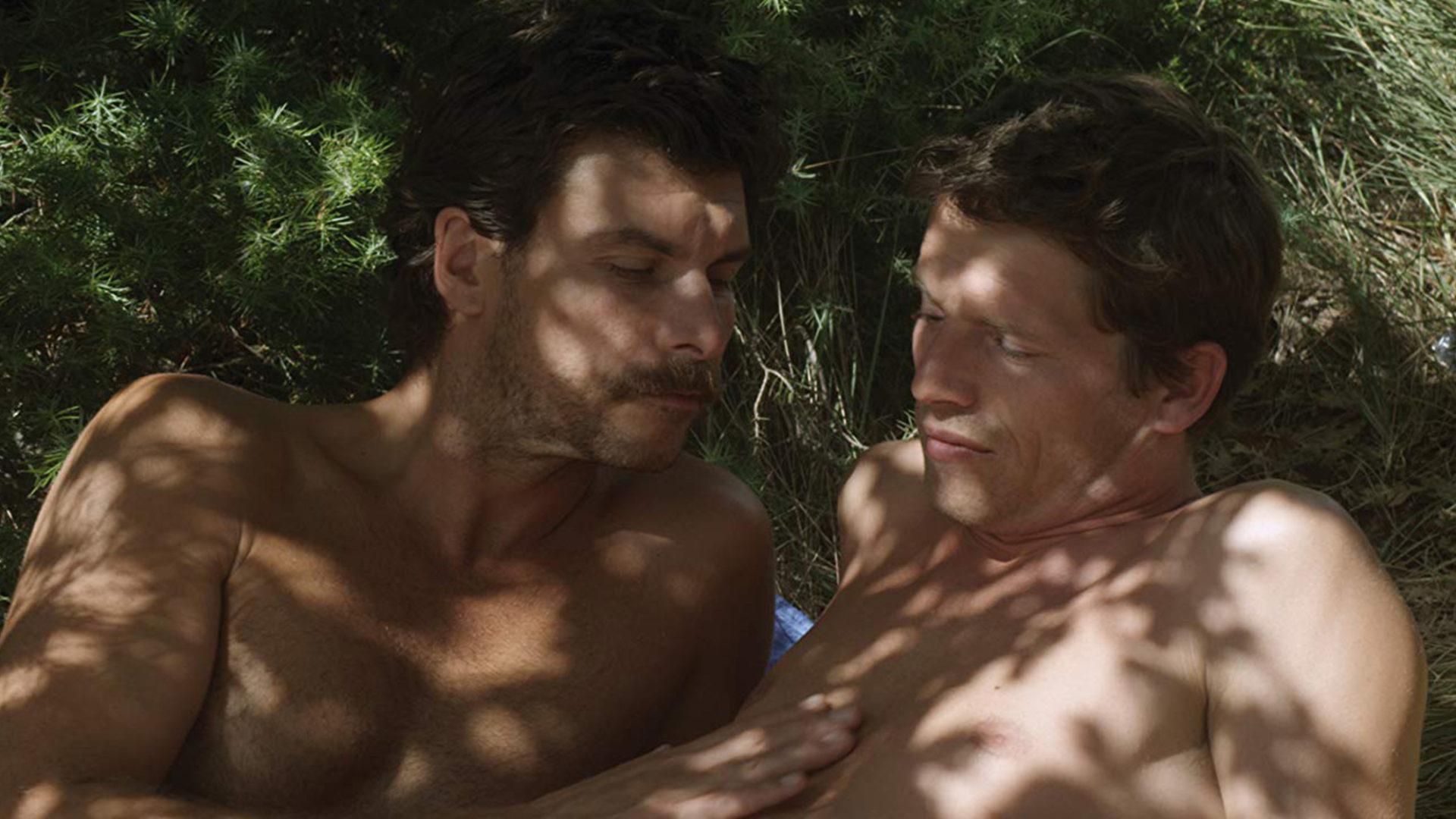 Final Thoughts: This movie is described ad nauseam as “Hitchcockian,” so I have avoided saying so in my column, not because I disagree but because I didn’t have anything to add to that conversation, and because I couldn’t come up with a proper cock pun. My bad. I love this movie: its atmosphere, simplicity, and selfishness. If Franck were to report the murder when he first sees it, his friend Henri would live. But from the moment he witnesses the crime, Franck loses his mind in his fantastical obsession with Michel. Been there, man. And that’s what I like about this movie: the protag (can I make protag work?) makes an entirely selfish and stupid decision that I couldn’t help but wonder if I would make myself. Michel seduces Franck. He seduces me. And he can haunt my woods any time he pleases.

Stop by next time when we discuss DRESSED TO KILL. Thoughts? Lamentations? Withering critiques? Gentleman Caller applications? Comment below or reach out to me directly on Twitter and Instagram.