Sinister Seven: Peter Counter Discusses “Be Scared Of Everything”

Peter Counter lives for fear. For the Halifax, N.S.-based writer, the emotions that flow from the horror genre have illuminated the shadows in his own personal history, helped him forge deeper relationships and nurtured his healing from trauma. Counter’s brilliant new essay collection, BE SCARED OF EVERYTHING (from Invisible Publishing) is a poetic and deeply thoughtful exploration of all the ways that horror permeates our everyday life, in ways both mundane and profound: essays range from ruminating on the way the Alien franchise interrogates corporate capitalism to how the metal band Ghost helped him reconcile with Catholic guilt. I was excited to dig my claws into Counter’s brain and pull back its pulpy layers to learn more – and he happily obliged in this installment of Sinister Seven.

Your new book, BE SCARED OF EVERYTHING started as a blog, titled Everything is Scary. What was the first post about?

Everything is Scary was born out of a few things. I’d been recapping a lot of horror TV for That Shelf, specifically Hannibal and True Detective, and I found that there was a lot more I had to say about pessimism, and faith, and horror. But the ideas I wanted to explore were not really pitchable. Editors have to acquire content that has at least some bearing on the present moment, and I wanted to write about William Hope Hodgson and the board game Arkham Horror. At the same time, I read Eugene Thacker’s In the Dust of This Planet, and the way Thacker penned profound thoughts on Junji Ito’s Uzumaki while admitting none of his [own] work mattered really underlined the fact that writing about horror didn’t need to be my job. It didn’t matter if anyone read what I wrote. So I just bought a web domain one Sunday and asked my friends Tim Ford and Leslie Hatton to join me in writing whatever we wanted about horror, inside and outside of culture. The only rule we had was it had to be thoughtful.

The first post on Everything is Scary is a travel blog entry about my bizarre first trip to Salem over Easter weekend that year. It’s a precious memory I share with my partner Emma, and one that I revisited in Be Scared of Everything, in the third essay, “A World Made of Train Tracks.”

Your book begins with a vivid depiction of a family seance. It seems like this item has been a helpful tool in helping you – and your mom – manage your grief over losing your Oma, and seems to have brought your family together in many other ways. How does it affect one’s own development, having a family that is open to supernatural experiences in this way?

I’m really blessed to have a family that gave me the freedom to explore belief and faith so openly and freely. It’s probably fair to say that all four of us have very different ideas of existence, spirituality, the supernatural, and religion. That openness and curiosity we share really helped me through crises of faith, since I never felt like anything I explored – Catholicism, atheism, nihilism, mysticism – would hurt my relationship with my family, as long as I maintained the same respect for them. We’re a pluralistic microcosm. For me, that environment engendered a spirit of half-belief. When I did those seances described in the book, I could believe they were mystical and profound while at the same time finding it amusing that we were using a children’s toy to supposedly communicate with spirits and demons. It’s a fun paradigm to live in, I think, because it puts human experience over prescriptive systems of faith or anti-faith. When my mom contacts her childhood spirit friend Rory for the first time in many decades, or when my brother and I use that same talking board to speak with our Oma, it doesn’t matter if it’s real because the context of our lives gives the effect meaning. The openness we share as a family regarding these things just deepens that context, and makes it safe to have fun with spooky things.

Your book so eloquently describes how horror – a genre that so many people shy away from – can be such an effective tool in forming personal connections. One of my favorite essays in the book discusses how friendship can form and deepen as you discuss your methods of survival in a potential zombie apocalypse. Can you share any other relationships in your life that have deepened (directly or indirectly) because of horror?

Since the pandemic started, and we’ve all been trying to have new types of fun that can keep us social and isolated, I’ve been reading R.L. Stine’s Give Yourself Goosebumps books on Friday nights over Instagram live and letting the people in the chat vote on the decisions. It’s something I used to do with my brother, our friend Starr, and my partner Emma in real life whenever the power went out in our shared St. Jamestown apartment. Now that it’s online, the community that’s grown in the chat is absolutely wonderful and eclectic. New friends I’ve never met in real life, old acquaintances I figured I’d never become closer with – we’ve become a tightly bonded community over the last seven months, having high stakes conversations about Stine’s truly wild narrative choices that have led to very grim outcomes. I think the fact that the activity is horror-centered really helps create a lively space filled with surprise, where people feel safe to join in, have fun, and collaborate.

I also think it’s fair to say you and I might not have met without our shared interest in horror, and it’s really been wonderful connecting with you over the past couple of years. 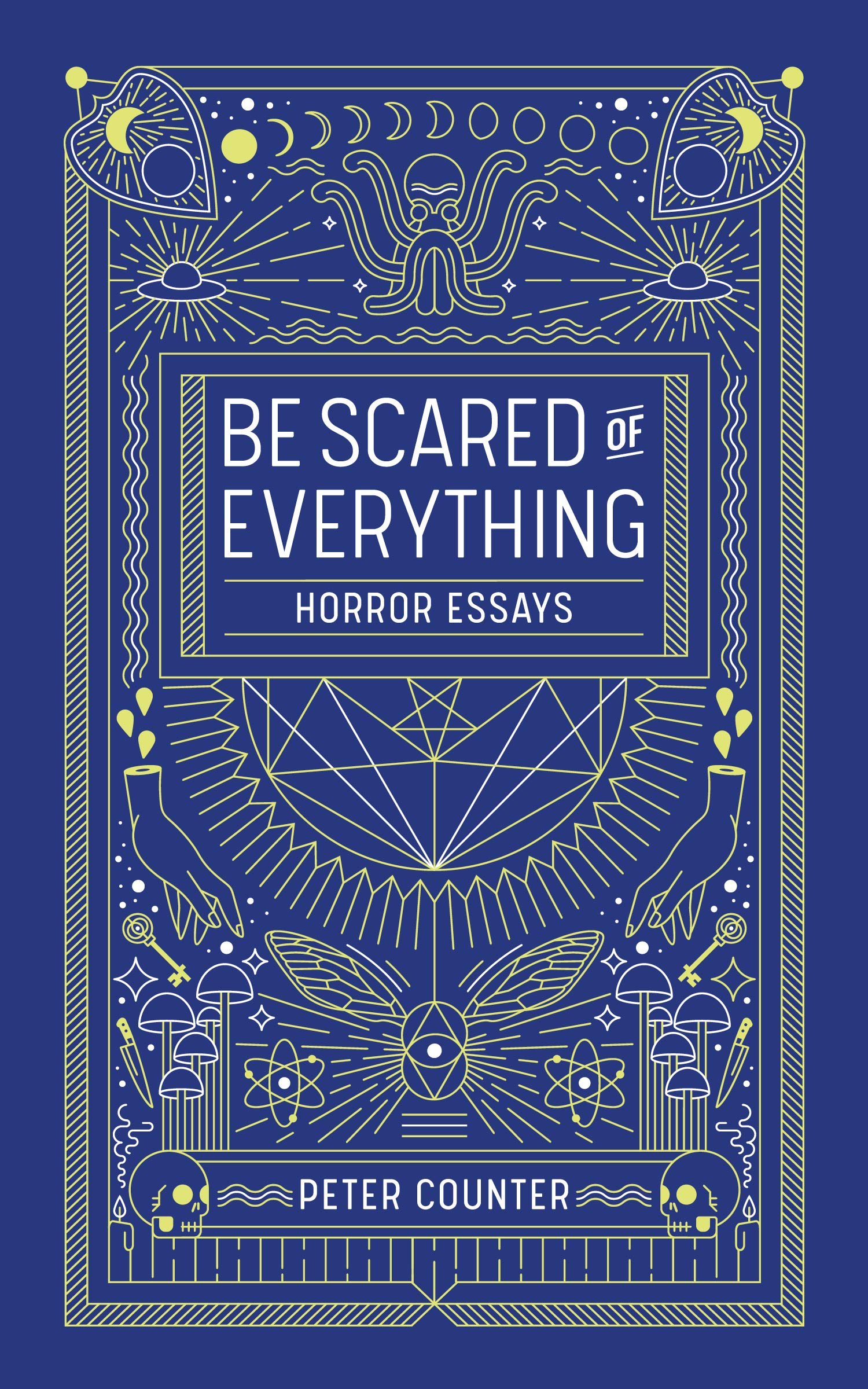 Without giving too much away, one of the essays in the book examines why horror and comedy are such a perfect pairing, using a scene with Niles Crane of Frasier as an example. I particularly loved the scenario you laid out – this nightmarish concept of an unseen studio audience laughing at Niles’ bumbling misadventures in a horrifying type of perpetuity. Do you often find yourself looking for the comedy in horror – or vice-versa?

Absolutely! Media is richer when it contains opposing emotions. Sadness amplifies joy, pain amplifies pleasure, all that. I really believe that good horror is a celebration of life, and so I have trouble taking scary stories seriously if they don’t have room for humour or an acknowledgement of irony. I think that’s part of the horror contract: if James Wan is going to make me watch Cary Elwes saw off his leg while his captor is hiding in plain sight, then I’m allowed to acknowledge the absurdity of what I’m seeing in all its wonderful glory. There’s nothing I find funnier than imagining Jigsaw trying to write off his hardware bills on his taxes, or asking for advice at Home Depot on how to invert a bear trap.

Comedy is the same, but mirrored. So much of what we laugh at is other people’s misfortune, largely because we know it’s not real. We allow Frasier and Niles to be cruel because we know cruelty will be extracted on them. On the surface, that’s just the sitcom structure, but I think acknowledging the pain surrounding of the characters can enhance all of the positive feelings associated with the show.

A number of the essays in the book – and on your blog – deal eloquently with the ways horror culture has helped you process your own PTSD. My favourite of these, as I’ve told you, is the piece discussing the series Hannibal and the ways Hannibal Lecter helps Will Graham as a “trauma normalizer” – opening new ways of seeing. There has been a lot of discussion – especially with the onset of COVID-19 – of the ways horror helps us cope with extreme trauma, grief, depression and isolation in a singular way. Why, do you think, does horror work that way for you? Are there any other horror characters who have opened a door for you – the way Lecter opens the door for Graham?

Horror gives us space and language for emotions we’re not generally allowed to explore in polite company. The effects of PTSD and other mental illnesses are terrible, obviously. And people who don’t experience them rarely want to hear about it, so there’s no nuanced ongoing conversation about suicidal ideation, the urge to self-harm, obsession with abusers, or pessimistic outlooks. The comfortable normative worldview is one of authority and order: if you have a problem, it’s fixable with a positive outlook and an inspirational image meme featuring a sunset. But for survivors of mental illness, that optimism rings false.

Horror is the only genre that always functions with chaos at its core, and for me that makes it the most emotionally honest. Sometimes bad things happen, and sometimes they don’t get better, and even if those bad things kill you they have value, you have value, your suffering has value.

Beyond Hannibal Lecter, Michael Myers is a trauma normalizer, particularly in the 2018 re-sequel Halloween. The world of that film is one that minimizes personal trauma through fetishization (the true crime podcaster characters) and the myth of desensitization (conversations about why Laurie Strode should get over her trauma). And then Michael Myers gets his groove back and makes the world remember: even getting stabbed can be a profound, life-shattering event.

A lot of horror people I know are lapsed Christians/Catholics (or grew up in that faith system and are still wading through their own personal beliefs) and in your chapter “Devil’s Nostril” you explore this tension and how you still sometimes feel like God’s rebuke – or wrath – is just around the corner. I’m wondering if this tension is something that animates you – or is it just a distant relic of another life?

It does animate me. My partner Emma and I both have this joke that we’re “Catholic atheists,” because growing up in a system of faith shaped our lives in such a foundational way that we haven’t really been able to shed its influence, particularly the guilt. I don’t believe in God, but I feel God every day in how my morals and guilt shape my actions. The difference is I used to think of Him as a divine, vibrant judge of light, and now He’s more like a giant corpse that reminds me of sin. Some people become anti-religious when they lose their faith, and I was like that for a few years in my twenties. Now I can appreciate the mythology of Catholicism and the role it played in shaping who I am today.

You’ve asked me this before, so now I ask you – what’s your favourite piece of horror art/literature/

Shirley Jackson’s The Haunting of Hill House feels perfect to me. Jackson is accepted as a master of the genre, and I think this book shows exactly why. It’s so tightly wound, and really set the template for modern American horror. From the opening line about life being unable to exist under the conditions of absolute reality, straight through to its “why won’t they stop me?” ending – I want to live in those pages. Jackson’s Hill House is my happy place.

BE SCARED OF EVERYTHING is available now from Invisible Publishing.

“Horror gives us space and language for emotions we’re not generally allowed to explore in polite company.” 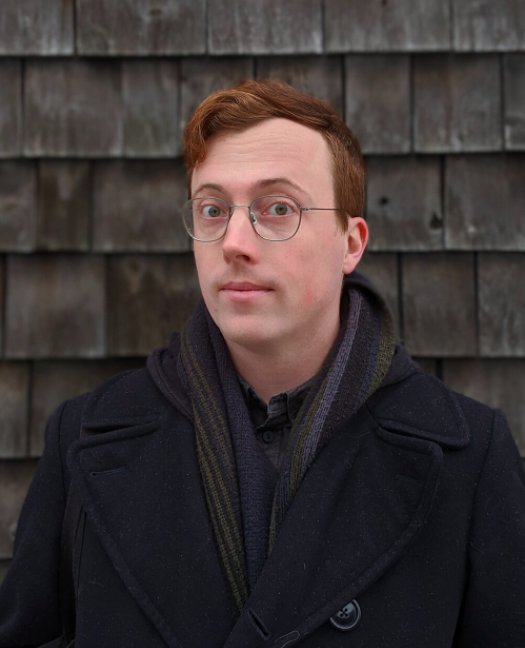