In her new short film DEEP TISSUE, director Meredith Alloway tells a story about a woman named Viv (played by Alloway) anxiously awaiting a session with her masseuse, Sebastian (Peter Vack).  Needless to say, things take an interesting turn, but not necessarily with the results you’d expect. DEEP TISSUE has played SXSW, AFI, Overlook FF, Brooklyn Horror and about 20 other big regional fests around the country.  Up next, it’s scheduled to premier the free streaming platform The Future of Film is Female beginning on July 24th. I got the chance to talk to Alloway a bit about how DEEP TISSUE came about, how her writing influences her film making, and what she’s got coming up next (SPOILER WARNING: There are some references to the short’s climax as part of the discussion).

What inspired you to write DEEP TISSUE?

I’d been thinking about cannibalism as a manifestation of codependency for a bit – like using that as a device or story in a film. This desire to consume someone else, to be consumed, and how it’s never enough. I’d been witnessing some toxic relationships around me for years, and examining codependent behaviors. I tend to process questions around things through my writing! I had developed a feature outline with similar characters that are in the short, but it was set in Texas. I couldn’t quite crack it.

And then I got a free massage part of a Sundance swag bag situation. Like the fancy, come to your apartment kind. The experience was so strange and wonderful. It was my roommate’s birthday, so she had flowers out in our tiny Manhattan kitchen, the breeze was flowing, I put on classical music. And yet, there was a random man in my apartment. Literally laying there, I was just struck by the intimacy, and lack thereof. I wrote the short the moment he left.

Over the course of developing the script, my producers Joshua Wilmott and Rachel Walker really helped me finesse some of the other underlying themes I was exploring: body image, sexual liberation, romance, and how they all play into the narrative. It then just became about these two character’s dynamic. And the biting for each of them became something more complex than just “cannibalism.”

While the film’s climax is certainly disturbing, there’s also a sense of empowerment for Viv. What were you trying to convey with her arc?

I wanted to show a woman receiving what she wanted. And with a respect for her consent and desire. It’s so rare we experience that, let alone see it on screen. I had no interest in judging what warrants her bliss. A lot of us who have gone through trauma struggle with that our whole lives. Having someone “see” us, and not run away. I wanted to show a woman who had a very specific desire, and be greeted with acceptance. And conversely, a partner (Sebastian) who also felt surprised in his connection with Viv. I always wanted to end the film with hope – that no matter your desire, what you’re working through, you can find someone who understands. Of course, the biting is dark and like you said disturbing, so there’s that underlying question: why are they doing this? I’ve been developing it out as a television series because I realized I had to get to the bottom of that question and wanted to explore some of the intersections of dark and light in these two characters.

What were the pros and cons of both directing and starring in the film? Had you always intended to take on both jobs?

I got my degree in theater, with a focus in play writing and directing, and was constantly in scene studies. So in a way, I’d been directing myself from within a scene for years and felt comfortable in it. I also feel like coming up in the theater world. I value collaboration. It’s always being in the moment, on the ground, work-shopping the scripts, performances, etc. with the actors, director, producers, writer. In a lot of ways, that feels natural to me.

I cast myself in DEEP TISSUE like I’d cast anyone else. I felt like I understood the character so much already and could convey that. I haven’t acted in my other recent films and probably won’t in my feature project I’m working on. But I felt like I could pull off Viv – especially if I was able to cast Peter Vack. Peter is the best! He’s also a wonderful filmmaker and I knew he’d be a great collaborator. He was actually supposed to be in my first film but then booked another job last minute. So I had wanted to work with him for a while. On set, he was really great about understanding what a scene needed and challenging me. One of my favorite moments in the film was something where he just encouraged us to improvise.

And then my team was really what allowed us to pull off me being in it and directing. That’s the major pro! Justin Hamilton (the director of photography) and I went to high school together in Texas. He and I made a super specific shot list and mapped out the blocking. I had a Lookbook and a rip-o-matic I had made to try and communicate the visuals and tone as much as possible. He’s so great to just jam with creatively, and on set he knew what we were going for. I did have the monitor on the floor during the massage scene. So I was directing while laying down!

And then Josh was also my editor, so he was on set keeping an eye on everything and making sure we got what we wanted, and offering his own creative insight. And lastly, Rachel also studied acting, so we went through the script beat by beat. We all made sure what we wanted to accomplish was coming across. I feel like if you’re wanting to wear many hats, collaboration and support is key.

I forgot about the cons part! Definitely getting the bite makeup off of my back while we were wrapping up the shoot. That stuff took multiple showers to get off – but shout out to our SFX guru Sheila Seifi for doing such a stellar job! 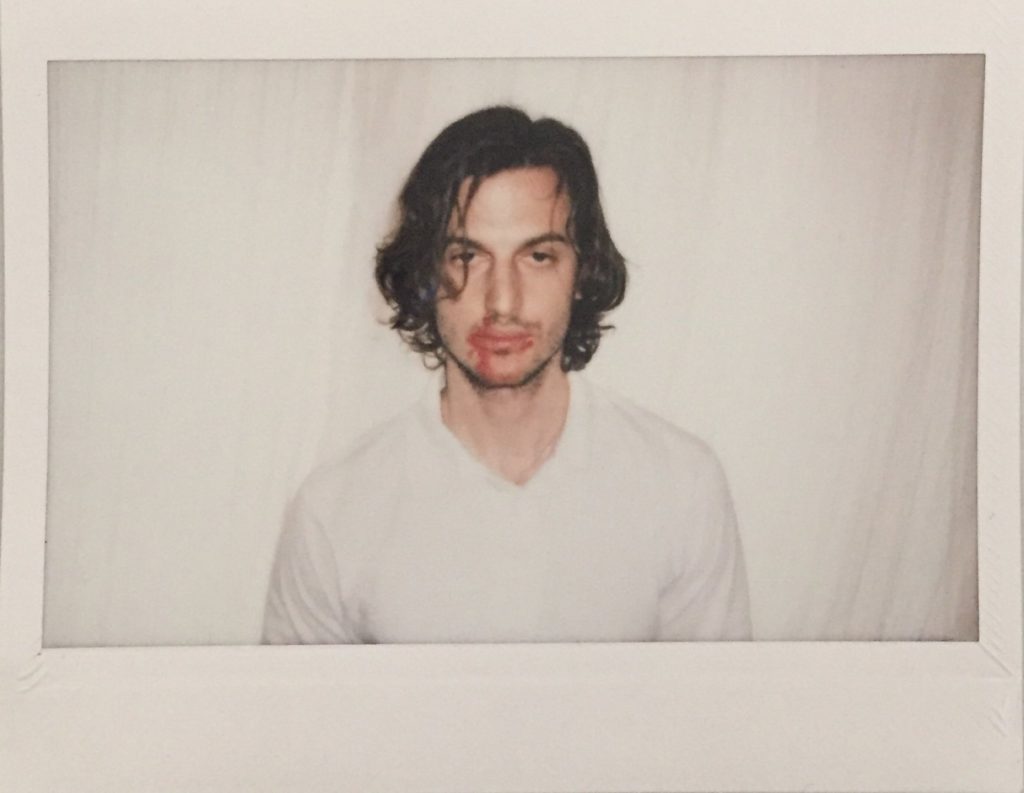 I think my favorite short films really honor the medium and they don’t try to cram a feature into a short. Shorts can be a punchline, a twist, a single interaction or conversation, or just a really contained story. I think a great feature really delves into character or concept – or at least my favorite ones do. You have time for it. The Lost Boys, The Shining, Black Swan, Midsommar, Dogtooth – those are films operating in a genre space whose characters really stick with me. And then movies like Rosemary’s Baby, It Follows, Goodnight Mommy, The Lure, The Changeling, The Ring (stop me now there are so many I love!) just really thrive on such a fascinating concept. What I do think shorts and features, especially in horror, can accomplish similarly – depicting a unique world.

In addition to your film work, you have a pretty extensive resume writing on film. Has your work in journalism influenced how you approach making movies?

It was my film school! It still is! When I moved to LA after college, I knew I wanted to focus on acting and writing — taking my playwriting and really pivoting back into film, which I always knew I wanted to do. I started writing for The Script Lab and then doing interviews, going to film festivals. It really allowed me to see what the current indie landscape looked like. I discovered the filmmakers who have gone on to influence and inspire me – I was particularly stoked to discover all of the Borderline Films movies. I continue to really dig the films they make. I realized a lot of the artists I admired were coming out of NYC, or at least started there. I connected with a lot of people my age at festivals who were making movies in New York. I remember living in LA and location scouting churches in NYC for my first film Interior Teresa, and people were like what are you doing? And I just thought, “I have to get to NYC.” Granted, my last two films I’ve made in LA!

Sorry, this is becoming an “I love New York” answer. But yes, I think interviewing people, writing about festivals, I’m so grateful for the education and inspiration that came from that journey. And still does! I love finding a film or artist and digging into a conversation around their work. It’s also taught me how to find the heart of a story, the thesis, when it comes to my own work. Which is a challenge I’m still working on daily!

How did you get involved with The Future of Film is Female? Can you tell me a little about that platform?

I first learned about the organization after going to one of their curated MoMA events. I had some female filmmaker pals screening their movies and I was so inspired by the vision of FOFIF. Caryn Coleman, who founded it, has really done amazing work to uplift new female voices in the film landscape through grants, screenings, and events. I’ve found that yes, we need institutions and executives and producers to make active steps to embracing and green-lighting projects from women, people of color, and members of the LGBTQ community. We also need grassroots movements and mentorships. I wouldn’t have made any of my films without these communities uplifting me. FOFIF is really taking active steps to elevate female voices and beyond. Even during quarantine, I’ve participated in a few zoom panels for other women’s films.

It brings me great joy to see our community helping each other through a platform like FOFIF. We’ve still got a long way to go, but I’m interested in anything that’s focused on empathetic action and progression.

Do you have any new projects coming up?

I’m in development on my first feature. I try not to talk too much about a project in the early stages and stay focused. But I can say, I’m very, very stoked about the producers who have come onboard. I’m deeply passionate about the story – it’s a character driven film with genre elements, but wouldn’t call it a straight horror. When making a film, I just really focus on telling the story in the best way we can and then whatever genre people want to categorize it as, cool. I have been watching a lot of early Scorsese, Claire Denis and reading up on sociopaths and murder cases. If that says anything without saying anything!

And DEEP TISSUE is a series, so I’m a few drafts in on the pilot and Lookbook. I love a good Lookbook, especially when you’re making something bloody.