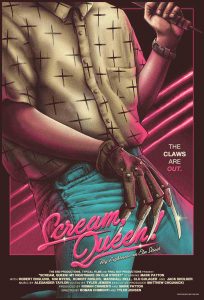 1985 saw the release of A Nightmare on Elm Street 2: Freddy’s Revenge, which has been dubbed by many generations as “the gayest horror film of all time”. This is due to the prevalent queer coding and subtext within the film, which reflected society’s fears and attitude towards the AIDS crisis and the LGBTQ community in general, at the time.  The film made double than what its predecessor had made at the box office and solidified Freddy Krueger as a horror icon but unfortunately the film’s star, openly gay actor Mark Patton, faced backlash from the film and left Hollywood.

It’s with this backdrop that directors Roman Chimienti and Tyler Jensen set out to create their new documentary Scream, Queen: My Nightmare on Elm Street (watch trailer below). The documentary focuses on Mark Patton’s journey with A Nightmare On Elm Street 2: Freddy’s Revenge, and provides a voice for the actor to finally share his truth about his experience facing the controversy of the film.

Mark Patton is a cult icon, hero and inspiration to countless LGBTQ people and he has left a profound legacy for generations of queer horror fans to come. It was an honour, privilege and pleasure to interview the directors of Scream, Queen: My Nightmare on Elm Street, and its shining star, “first male Scream Queen”, Mark Patton, for this fabulously rad edition of Sinister 7. Enjoy!

Q1: You had a big break from the horror industry, what brought you back?
I thought I was done with Hollywood. I was completely engulfed with my new life in Mexico. It wasn’t until Never Sleep Again came looking for me that I even knew I was famous anymore. They called me the “Greta Garbo of horror.”

Q2: What was it about Jesse Walsh that you think impacted LGBTQ horror fans the most?
I think for many young gay people, A Nightmare on Elm Street 2 was the first movie they ever saw with a character they could identify with.  The internalized fear that comes with “coming out” is very real for many LGBTQ people, when they’re first discovering it for themselves, and people have latched on to this story in a very personal way. Even to this day, I still get young kids coming up to my table in small cities around the world and they tell me they’re ‘rainbow.’

Q3: If you could give your 21-year-old self advice, what would that be?
Stick with it and don’t quit!

Q4: What advice would you give youth who are struggling with their sexuality and/or identity?
Be on your own side. If you are unhappy, sometimes geography changes everything. The world is very different than when I was your age. Just hang in there and know your history.

Q5: What inspired you to create this documentary? Why now?
We both grew up loving horror movies and the Nightmare series. It wasn’t until revisiting A Nightmare on Elm Street 2 decades later, after growing up and coming out on opposite sides of the country, were we able to appreciate the coded coming out narrative hidden within Freddy’s Revenge. As thrilling as it was to develop a deeper connection to a film we already cherished, the internet opened a nasty dialogue that dominated any discussion about the Nightmare sequel. People mockingly referred to Mark as a fag and the story ‘gay’ (as in bad/lame). Mark had already started on his journey to reclaim Jesse from the homophobes through his convention talks and social media platforms, and we felt we could help him save the worlds first male Scream Queen!  The ghost of homophobia doesn’t get exorcized just because we have gay marriage now; it persists in our community. The world has almost undergone a complete 180 since we started this project and we have found that Mark’s story is important and relevant as ever.

Q6: What messages do you want horror fans to take away from this documentary?
The horror genre has always been a niche group that endured criticism from the outside world and therefore it shouldn’t be that difficult to relate to the queer fans. Plus, it’s time that we rewrite the conversation about A Nightmare on Elm Street 2 and stop shaming it for its queerness. For the horror community, we intend to introduce ourselves. The gay horror community is emerging from the closet we have been in for a long time.

Q7: When can fans expect to see an official release date for the documentary?
People have been anxious for the release of this film and the outpouring from fans has been really motivating us to keep going. Documentary filmmaking can be a beast and our story has evolved over the last few years to include events both with Mark’s travels and the current political climate of our nation. We are gearing up to hit the festival circuit this spring. The wait is almost over!