Welcome back, short horror gourmets, for a brand new batch of Short Cuts. This month on the menu we’ve got a delectable three course meal, including a new homeowner going to extremes to protect what’s his, an extremely painful metaphor for depression, and a particularly nasty found footage film.

Make It Out Alive (2021)
Length: 7:13 minutes Director: Christopher Flippo Starring: Adam Cook, Josh Edmonson, Geoff James, and Joanna Lewis
Anyone who’s had to move into a new house knows that it can be a trying ordeal under the best of circumstances, nevermind having to contend with a group of masked intruders hell bent on murdering you and taking anything valuable from your new residence. But damned if Adam Cook’s doting husband doesn’t come through with flying (if not slightly unhinged) colors as he steels himself to do what he believes needs to be done without losing touch with his domestic revelry. Director Christopher Flippo has crafted a quirky, funny short with a delightful mean streak. Prepare for a few unsettled chuckles.
Where to find it: Streaming on YouTube Smile (2021)
Length: 6:06 minutes Director: Joanna Tsanis Starring: Konstantina Mantelos, Tyler Williams
The phrase “it hurts when I smile” takes on a whole new meaning in this short from Joanna Tsanis. The film introduces us to a young woman deep in the throes of depression, surrounded by medication and unable to even muster up the energy to answer pleading calls from her mother (a brief voice cameo from Ashley Laurence). As she tries to get some sleep, that depression takes on a more tactile form as a malicious entity tries to finally put a smile on her face in one of the most horrifying sequences I’ve seen in a short film for quite some time. Between the atmosphere, a painfully believable performance from Konstantina Mantelos, and some cringe-inducingly realistic practical effects, this short may have you covering your mouth rather than your eyes.
Where to find it: Streaming on YouTube 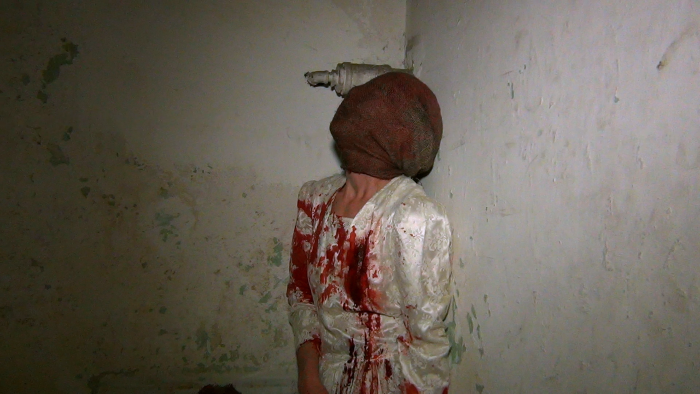 Loveless (2022)
Length:  24:53 minutes Director: Zach Lorkiewicz Starring: Brittany Lewis, Lauren Elyse Buckley, Sarah O’Connor, Anastasia Katarina, & Sarah J Bartholomew
Director Zach Lorkiewicz shows up in Short Cuts pretty regularly because I’m always fascinated by the ways he’s willing to experiment. In Loveless, Lorkiewicz delves into found footage territory as the film follows four girls as they tape themselves on an excursion to perform a séance at a manor known as the home of local disgruntled spirit Melinda Loveless. But we soon learn that the girls bring their own baggage into the proceedings, and everything may not be as it seems. Both the film and its characters are rather mean-spirited (no pun intended) but both the script and the amazing ensemble performance give us the tiniest glimpses at the pain that hides behind the contempt that oozes from the screen. It’s a pretty harrowing watch, but definitely worth it.
Where to find it: Streaming on YouTube