Welcome back to another round of Short Cuts!  As we all continue to manage as best we can with a pandemic forcing us to be indoor kids (granted, if you’re like me you probably had a big head start on that anyway), I bring another fresh batch of shorts to make the time go at least a little faster.   This month we’ve got a peek at the nightmares of parenthood, a fun Fulci throwback, a psychedelic killer doll, and more!

Now, just a heads up that I’ll be taking a brief hiatus in the month of May.  But I’ll be back in June so, as always, if you or anyone you know have a short film you’d like me to consider or if you’ve got some news you’d like to share in the short horror world, please contact me via Twitter or email me at remedialhorror@gmail.com! 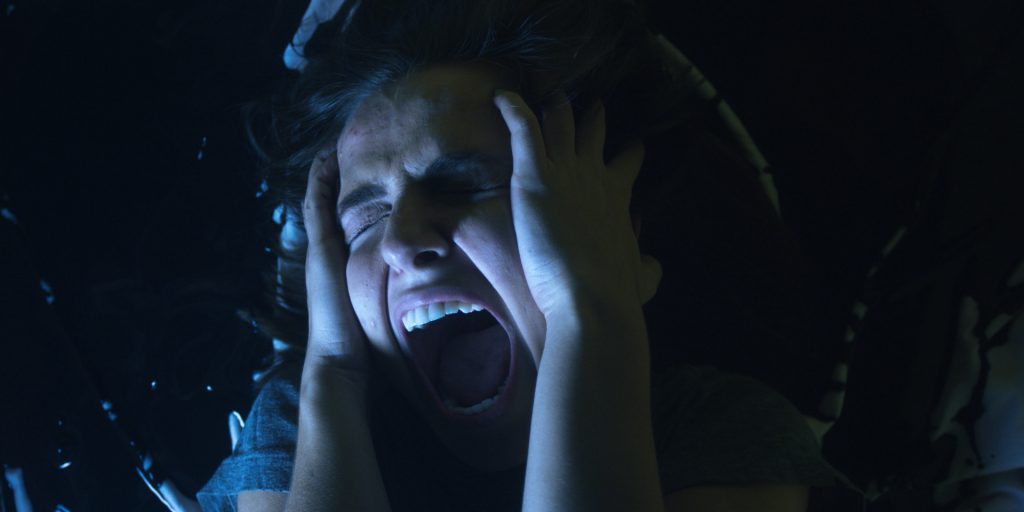 The Knock (2020)
Length: 4 minutes Director: Zach Lorkiewicz Starring: Lauren Elyse Buckley, Deborah O’Brien, Anna Christensen
A few months ago I featured Zach Lorkiewicz’s short film The Ball, a film that blended malevolent haunting with a quirky sense of humor.  In The Knock, Lorkiewicz leaves the laughs behind and goes right for the scares, as a woman is awakened in the middle of the night by what sounds like an old woman knocking frantically on her door.  There seems to be a fair amount of dream logic at play here, with the film bounding from ominous knocks, to creatures under the bed, to the bed actually swallowing someone whole.  But if you’re anything like me, you’ll be too busy freaking out about the “what” to be too concerned with the “why,” because this film is a hell of a ride.
Where you can find it: Streaming on YouTube 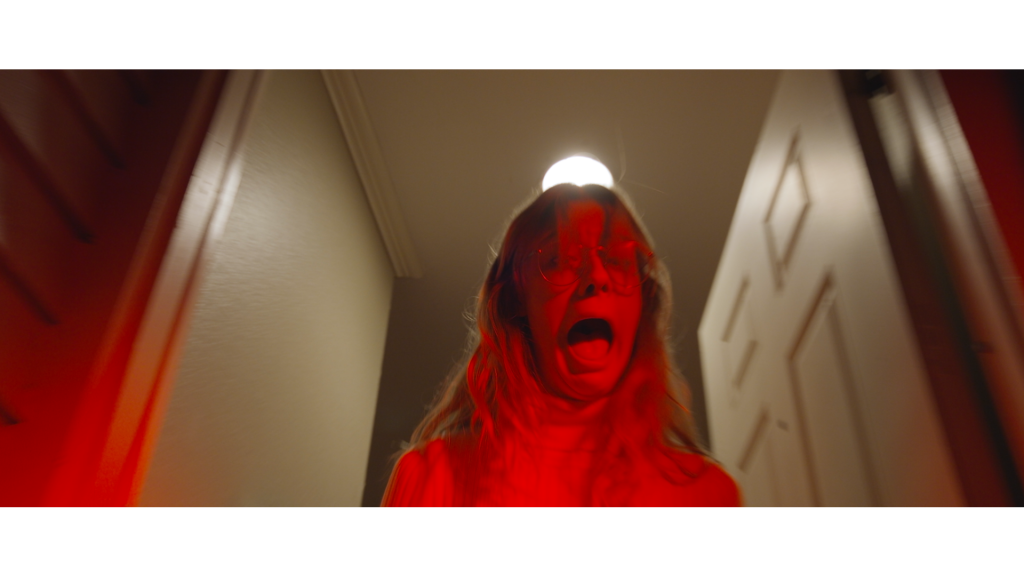 The Night of the Rotten Intruder (2020)
Length: 10 minutes Director: Brayden Read Starring: Laney Neumann, Jared Wayne, Darious Mohebi, Brayden Read, Noah Levine
I’m a sucker for bonkers Italian zombie apocalypse movies like Lucio Fulci’s Gates of Hell trilogy and Andrea Bianchi’s Burial Ground, so I’m definitely the target audience for Brayden Read’s homage to those films.  After being stood up by her boyfriend, a young horror fan gets a much different kind of visitor in the form of a crawling, rotten zombie barging into her apartment.  By the time her boyfriend wises up and makes his way over, he arrives just in time to get swallowed up by the obligatory wave of ghouls taking over the landscape.  The film plays with a lot of the same styles and narrative beats as the films that inspired it, but adds it’s own fun twist as the resolution acknowledges how some among us horror fans may react to an Armageddon of the undead.
Where you can find it: Streaming on YouTube

And the Baby Screamed (2018)
Length: 4 minutes Director: Dan Gitsham Starring: Fionn Gill & Lisa Backwell
As someone who doesn’t have (or plan to have) kids, the idea of being responsible for keeping another human alive 24/7 terrifies me.  And that anxiety is precisely the button that Dan Gitsham looks to push in his short film about a young husband waking in the early morning hours to care for his newborn.  And doing it again, and again, and again, until one night he can’t take it anymore and turns off that damn baby monitor.  Of course, this being a horror film, there’s definitely something going bump in the night in the baby’s room as Gitsham gives shape to the existential dread that must come with being a parent.
Where you can find it: Premiering on Alter in June. 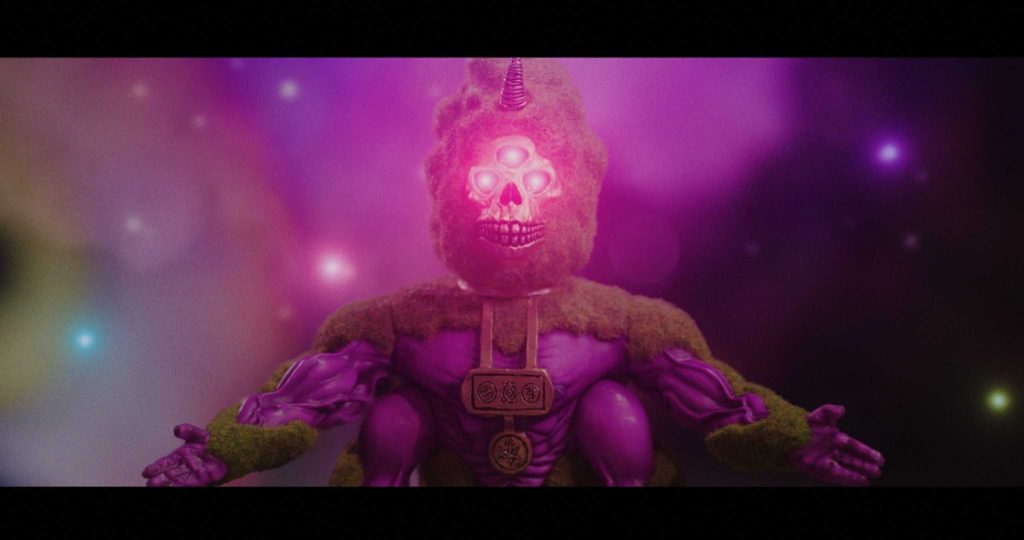 Budfoot (2020)
Length: 16 minutes Director: Tim Reis and James Sizemore Starring: Skinner and Henry Zebrowski
What do you get when you cross an overworked toy sculptor, the noxious fumes from the chemicals he works with, and what must be years upon years of marijuana use?  You get Budfoot, the sentient action figure who sounds a bit like Matthew McConaughey’s character in Dazed and Confused but who has much more sinister intentions.  Is this a silly stoner film?  100%.  But it’s also incredibly well-crafted, from the set design, stop-motion animation, and some of the best CGI I’ve ever see in a short film.  The end result is a visually-stunning movie that takes the typical stoner tropes and adds a healthy dollop of Lovecraftian insanity.
Where you can find it: Streaming on YouTube 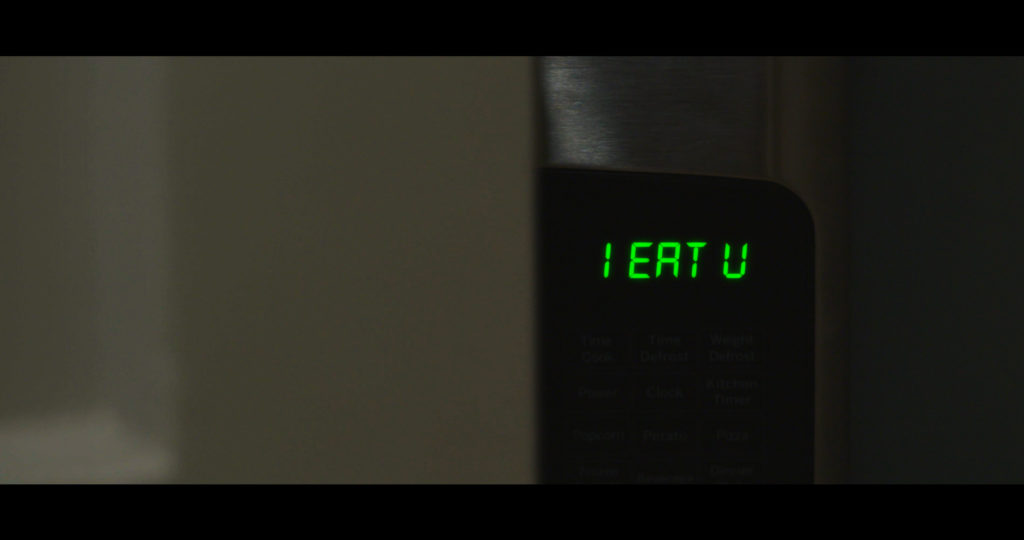 Ding…You’re Dead (2019)
Length: 5 minutes Director: Jay Salahi Starring: Trevor Larson
Well, we’ve had an action figure made of marijuana, so why not throw in a killer microwave as well?  A man house-sitting for a friend thinks the worst he’s going to have to worry about is overfeeding the dog, but when he starts hearing strange noises coming from the pantry, little does he know about the table-turning, food thawing horrors that await him.  Look…this is a movie about a killer microwave, so please don’t go into it expecting anything more than that.  But it’s also a really fun movie about a killer microwave that knows exactly what it is.  So make a little popcorn (carefully!), sit back, and enjoy.
Where you can find it: Streaming on YouTube