Hello short horror fans, and we’ve got April Showers (of Blood) to share with a new batch of shorts. This month’s films include a some brutal sci fi body horror, a bickering married couple that inadvertently raise a demon, and a brother-sister duo ready to open the gates of hell.

NOVA (2021)
Length: 9 minutes Director: David McAbee Starring: Kelly Kula
When we first meet Dr. Nova Thorpe (Kula), an engineer at a research facility, she’s already in a bad way. It appears the project she’s been working on has a pathogen working its way rapidly through her system, a mysterious creature running amok in the facility, and leaving her with only a few minutes to record a warning via one of the facility’s recording devices. Writer/director David McAbee pulls off a great trick by telling a contained story, featuring what is essentially one woman talking to herself in a small room, that hints at much larger implications. Kula really sells the desperation of the situation as she rapidly deteriorates, made all the more visceral as we get some really juicy makeup effects and sound design. It’s tight, guttural, nihilistic sci-fi horror at its best.
Where you can find it: Making the festival rounds. Check out the trailer here 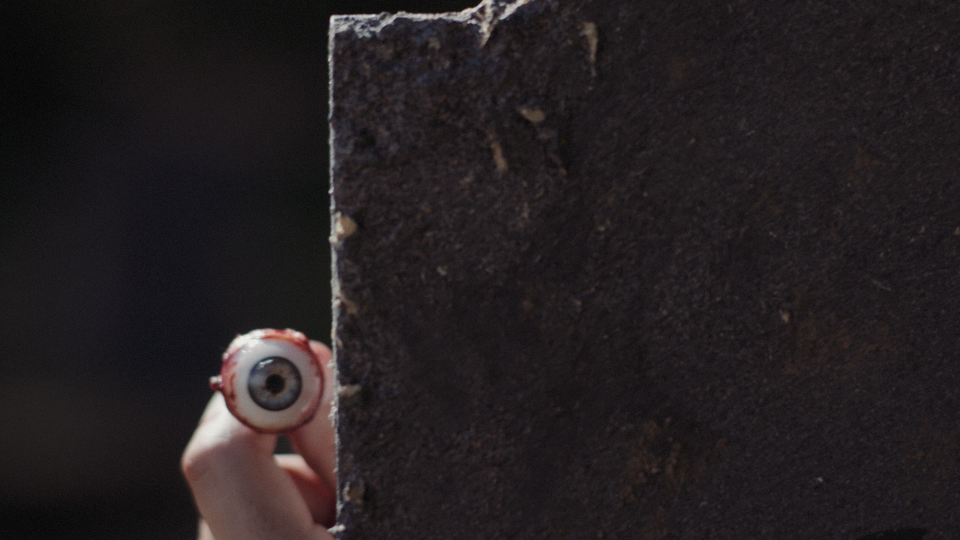 Grave Sight (2020)
Length:  7 minutes Director: Angus Swantee Starring: Holly Stevens, Craig Gunn, Dale Bellefontaine
It’s not everyday you get a movie that blends demons and gore gags with an earnest relationship comedy, but that’s just what Angus Swantee has done in his short about married couple Tanya and Preston digging up a grave in search of valuable jewelry. Their banter belies the macabre nature of their work, as their argument about Preston’s lack of follow-through could be one they were having while grocery shopping rather than robbing someone’s grave. When their work awakens a powerful demon, things take a grisly turn without the film losing its playful tone. It’s a lot of fun, and you can’t help but appreciate a guy using his own dislodged eyeball to look around a corner without being spotted.
Where you can find it: Streaming on YouTube

Satanic Panic ’87 (2020)
Length:  3 minutes Director: Bryan M. Ferguson Starring: Arran Totten, Yuki Sutton, Amy Clydesdale, Yoshie Campbell
The best thing about Bryan M Ferguson’s short is that for as nutty, over-the-top, and downright unbelievable as it gets, it also provides a pretty accurate depiction of the kind of thing parents worried about at the height of the Satanic Panic for which the film gets its namesake. When we meet siblings Koda and Pike, they’re right on the brink of completing the sequence of tasks that will grant them access to hell’s power. Per their infernal guide speaking through an aerobics video, the only item left on their checklist is a human sacrifice. Alas, the closest human is their poor mother. Taken at face value, it’s pretty disturbing. But taken as a satire of the kooky fears of the Reagan era, it’s also pretty damn funny.
Where you can find it: Streaming on YouTube