Shot in 2019 and finally seeing wide release through VOD and digital, Seth A Smith‘s (The Crescent) TIN CAN is a brutal mix of body horror and dystopian science fiction. Anna Hopkins (V/H/S/94) stars as Fret, a brilliant parasitologist who is part of a team desperately working to rid the world of a deadly and highly contagious fungal infection called “Coral.” Initially, Coral attaches itself to the host’s skin. As the disease spreads, it slowly encases its victim in a hard, shell-like cocoon, eventually infecting the internal organs and blood.

Just as Fret and her colleagues seem on the verge of finding a cure for the disease, she’s violently attacked and placed in suspended animation. Upon awakening, she finds herself confined to a cramped, cylindrical stasis chamber. Soon, she realizes she is not alone in her predicament and begins communicating with others in neighboring containers.

In a future utterly devastated by Coral, society has resorted to nightmarish measures to stem the rate of infection. If Fret can escape from her tiny cell, she’ll be forced to contend with a frightening new reality and face the demons of her past. Grim, claustrophobic, and terrifying, TIN CAN is a complex exploration of the nature of evolution and the lengths to which humanity will go to ensure its survival.

Smith and Hopkins recently sat down with Rue Morgue to discuss the making of TIN CAN and its eerily prophetic implications.

Thanks for taking the time to speak with us today, Anna and Seth. TIN CAN is a very disturbing film. It really hit on a lot of my phobias. Seth, how did you develop this story with your co-writer, Darcy Spidle?

Seth A Smith: We had just finished The Crescent, and that was still kind of a fantasy horror movie, but it was very much in a real-world setting, and we wanted to do something more in the deep end of sci-fi. As usual, we’re always looking for cheap ways to make films. Putting together a budget is always tough, as an independent filmmaker. So we’re looking for single-location films. The location kind of got smaller and smaller until we were talking about a person in a barrel. I was also doing a lot of research into factory farming. It’s a horrible thing, but I was kind of inspired by it in the context of a horror movie – just what animals go through in this industrial process. If you saw a person going through something like that, I felt like it would really resonate with people, although we went with a much different, sci-fi approach. That was kind of the jumping-off point.

Amazingly, TIN CAN was shot before the COVID-19 pandemic. In retrospect, did the pandemic change your perspective on the film? Does it seem prophetic?

Anna Hopkins: We were just talking about this. When you’re acting in something like this, you’re going pretty deep into what it would feel like. I was telling Seth there was a sequence that we were shooting for the film where my character was doing her commute to work. We did that commute over and over again and shot it in progression as the virus took over. I found myself experiencing that in my own neighborhood. It sort of felt familiar. I was sort of prepared for [the pandemic] because I had already just really dived deep into that world. And I think Seth did such an incredible job writing this film in a way that really holds up. It’s not far off from what really ended up happening. Kudos to him for sadly doing it right! (laughs) 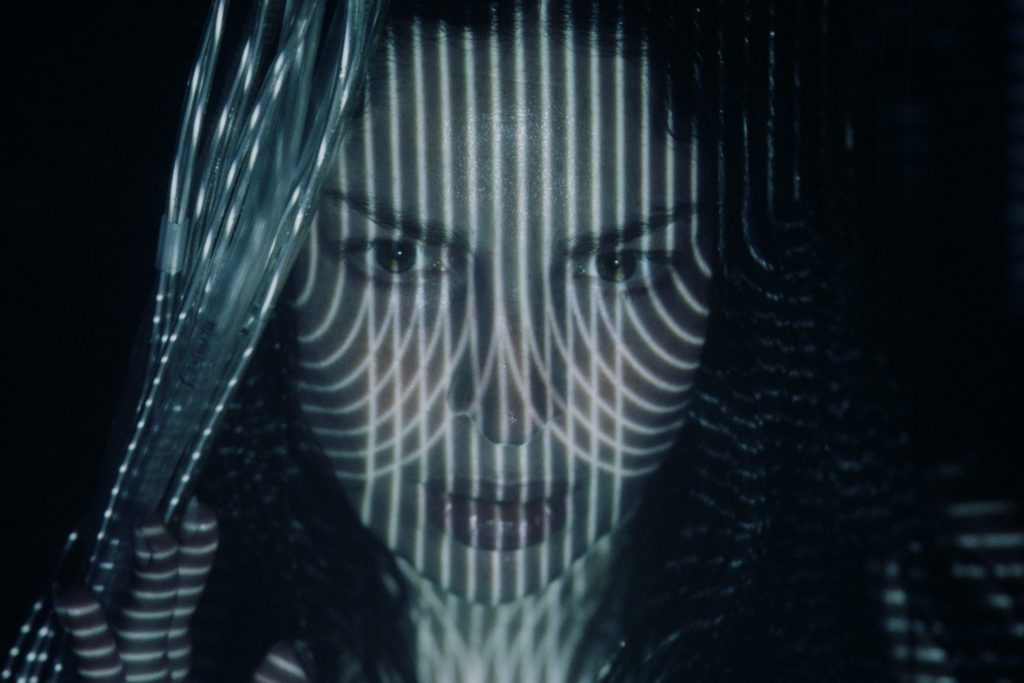 SAS: We shot TIN CAN in early 2019 before the pandemic. It was kind of interesting, for myself, seeing how the film’s meaning changed or how it was viewed changed over the course of this thing that happened. It’s kind of neat to see a film in this organic state where it’s always changing, even after it’s finished.

Anna, tell me about your character, Fret, and your approach to playing her. Considering some of her actions in the film, do you see her as a hero or a villain?

AH: I think that she, and this something that I really loved about the script, is neither. You could call her a bit of an anti-hero. What I love about her and the film itself is that they live in a real gray area. She reacts in some ways that are quite noble and some that are not. I think that makes her really relatable, even if we really don’t want to relate to her. I did. Not in all ways, but in some ways. I think she’s very hard to categorize, which makes her a really cool protagonist for a film like this.

How did you maintain that high level of emotional intensity that Fret required? Was Fret a hard character to leave behind at the end of the day?

AH: (laughs) No, because I would just fall asleep at the end of the day!  There was a lot of heightened emotion. I think the physical aspect of it, being out of breath or being tense, was really interesting. And by the end of the day, I would have a glass of wine and just pass out. That was my routine.

What were some of the challenges of shooting in such a confined, claustrophobic space? Was it as uncomfortable as it looks on-screen?

SAS: It was definitely more challenging for Anna since she has all these physical constraints and she’s sitting in uncomfortable positions. This was probably the hardest movie that I ever edited. On such a small stage, you really only have a few angles, and you have to come up with some really creative ideas. If you’re focused on one person for 45 minutes in this small space, you have to think of some ways to make that interesting. We had about three or four of these [chambers] with different components for different tricks – waterproof and rolling. I remember that there were a couple of scenes where we had to do this dance where we were taking off panels and putting them back on as the camera was moving around. Those things were new to me. It was difficult coming up with new ways to shoot it without it being too “samey.” I think we did alright. Obviously, it was a whole different experience for Anna!

AH: I was in this tiny, little thing, but within a huge, empty warehouse. I never really felt too  claustrophobic until we did that one scene when it fills with water. Because I would always have like one panel open. But there was that one very cool scene where we had to fill it with water and then close it up and topple it over. That was the one that made me meditate in the tin can! (laughs) 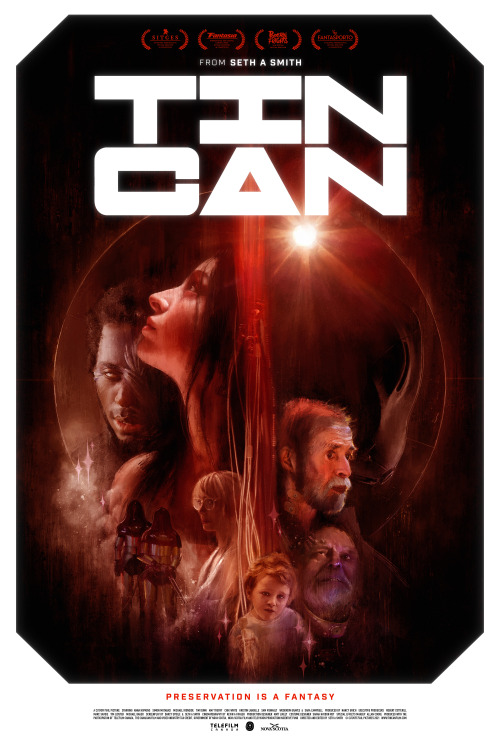 How much of that part of your performance was acting and how much was just pure, visceral reaction to the circumstances you were in?

AH: I think that shot was kind of cool. I didn’t really have to do anything, it was completely visceral!

SAS: I think [that shot] was one or two takes.

Some reviewers are comparing TIN CAN to the films of David Cronenberg. How do you feel about that? Visually and thematically, what were some of your influences for TIN CAN?

SAS: I love David Cronenberg. I grew up on his films. He’s very explorative. I like that about the horror movie genre in general. You get to do some weird, surreal stuff, and people accept it because they’ve entered into a contract to watch a fantasy movie. So you can really try some things out. That isn’t always the case with other genres.

I wouldn’t say that I was influenced particularly by any movie. I was thinking of other “person in a coffin” movies like Kill Bill and Buried on a practical level – like how they shot the films. My idea was that I wanted to do a science fiction fantasy movie without a lot of tech and gadgets. I feel like I see that every day. I wanted to do something that was detached from that – something that was kind of primitive in a medieval-type future. I was more influenced by architecture in that regard.

I was watching a bunch of sci-fi films, too, like Alien – that’s one of my favorite films, and it may have rubbed off a little.

What is TIN CAN saying about humanity’s drive to survive at all costs? Could we be perpetuating a sort of status quo at the expense of our evolution?

AH: That’s exactly what I really liked about the film. We get to see a very disturbed glimpse into what it would look like if we didn’t have control. It’s a little bit of a cautionary tale. We hope that you’re not right, Seth, but you did a good job!

AH: I just finished a film that hopefully will be coming out soon. It’s a short film about my late father who was a Canadian painter. It explores a lot of his work. It’s a hybrid of memoir and experimental film that deals with his work as a painter and my work as well. I’m really excited to share that.

SAS: I just finished a couple of scripts, including an adaptation of Algernon Blackwood’s The Willows, which I’d like to do. It’s one of my favorite stories. I’m also working on a rotoscoped fantasy feature called Beshader.

TIN CAN is available now on Canadian VOD and digital platforms from Level Film.