Scream Factory Provides Some Brain Food With 1988’s “The Brain”

Feeling like some brain food? Scream Factory’s got you covered with their latest blu-ray resurrecting a neglectic gem – this month sees the re-release of Edward Hunt’s The Brain. High on ideas and less so on plot, the story centers around high school senior Jim Majelewski (Tom Bresnahan), who is too clever for his own good at school, and after one explosive prank goes too far, he’s told to register at Psychological Research Institute or face expulsion (hey, it was the 80s). It’s at the institute where medical researcher Dr. Anthony Blakely, played by the always reliable David Gale (Creepshow, Re-Animator), is conducting brainy research of another kind, all the while hosting a Scientology-like TV series called Independent Thinkers. Cue a monster brain and a lot of running around and people getting eaten or beheaded by axe-wielding thugs or monster brains. Though it doesn’t quite achieve the lofty heights of a Cronenbergian tax-shelter classic, The Brain pilfers some of the maestro’s best Videodromesque tropes – a TV audience held captive from a mind-control, crazy hallucinations, and enough squirmy tentacles and pulsating giant brains to make this a solid ode to the best of Canuck body horror. Plus, it’s always fun to see Canadian character actor George Buza turn up in anything; here he plays Gale’s assistant who gets one of the best kills in the film, decapitating a police officer with an axe (also, his enormous moustache deserves its own screen credit)! 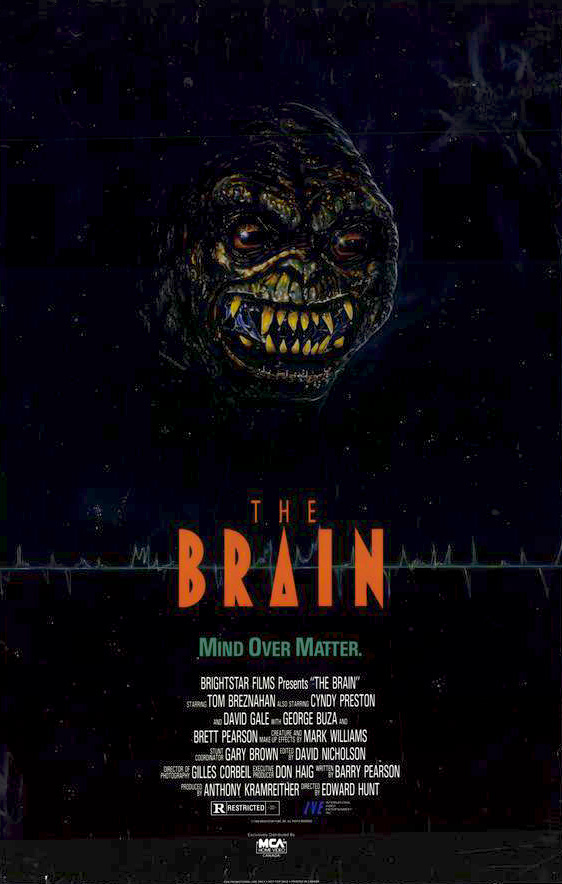 A release like this just hammers home how essential practical effects are to this kind of monster movie; the titular brain is never truly scary, but it’s always a hoot to watch onscreen, whether literally eating a researcher by splitting its hemispheres into two and absorbing her whole, or when flexing its massive teeth at the audience. Director Hunt (Alien Warrior, Bloody Birthday) seems to enjoy having the brain’s spherical, toothy face appear in staccato bursts of editing that tips its hat to the creepy demon visage that punctuates the ending of The Exorcist. Throw in a lively score from Paul Zaza (Prom Night, Popcorn), and you’ve got an entertaining 90 minutes.

Better still, Scream Factory’s slick 2K restoration means that you’ll never have to sit through a grimy looking VHS rip again, and despite the wintry southern Ontario locations (including Mississauga’s Xerox Centre standing in for the research institute), the film uses a surprisingly vibrant palette of colour, whether from the red/green of the brain-in-a-tank itself, or spurting geysers of blood from any number of character’s hallucinations. And if it’s extras you’re after, Scream Factory’s got you covered – with commentary tracks from Hunt, Bresnahan, and Zaza (all presented separately, a slight shame). The disc also comes equipped with some fun featurettes, including interviews with George Buza and Cynthia Preston, though the best of the lot though might be the 11 minute Food For Thought: A Love Letter To The Brain, in which uber Brainfan John Campopiano chronicles how his early love for the VHS staple culminated in having cast and crew send him their Brain memorabilia…and a guest spot on the disc!