Within the horror genre, there are many stories we like to tell again and again. Like any version of mythology or folklore, horror helps us provide explanations for the terrible things that are inexplicable in our real world. There is a reason why narratives such as the ‘Satanic Panic’ have stuck in our cultural zeitgeist. It is much easier to stomach child abuse when the people committing it are serving a satanic higher power. However, unfortunately, in reality no such explanations exist for the evils human beings commit. 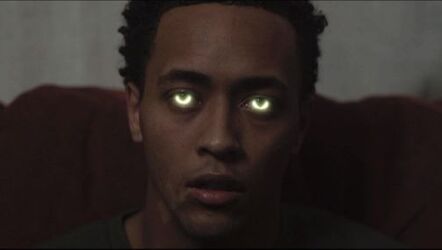 Josh Atkinson’s DISPLACED claims to be about gentrification, yet the film comes across more as a depiction of a single man battling his childhood trauma. We learn that Nate (Philip Jayoni), a young Black man living in a Brooklyn apartment, grew up in an abusive cult, that in his recollection may or may not be serving Satan. Jayoni is certainly the highlight of the film. His performance is compelling and strong enough to drive the story forward even when it lags. His portrayal of Nate’s trauma and resulting profession as an agent of Child Protective Services reveals the character’s complexity and ultimately caring nature, regardless of whatever evil may reside within.

Nate’s adult troubles begin when a white couple moves into the historically Black-occupied apartment building owned by his grandmother (Hope Harley). The couple, Heather (Megan Fitzgerald) and Lucas (Josh Atkinson), are unnaturally enthusiastic to get to know Nate and might be sending subliminal messages through their sleepwalk-induced ramblings and ASMR videos. The couple amusingly makes money as “freelance consultants,” a purposefully vague and purposefully white profession. The theme of gentrification in the film is exemplified best by the uneasy neighbors of color as they accept Heather and Lucas into their community, as well as what their arrival means for Nate’s stability and livelihood. Yet, the true horror lies in the fact that they may actually be affiliated with the cult Nate escaped as a child.

Doing quadruple duty as director/writer/editor/actor, Atkinson is clearly talented and could undoubtedly do much more with an even larger budget. Made for a mere $16K, DISPLACED uses its scant special effects incredibly well; the specters of the satanic forces that pursue Nate are truly chilling when they appear. The glowing eyes you’ll see in DISPLACED’s promotional materials also figure into the film’s tensest moments and reveal the battle of good and evil within Nate. The effectiveness of the film’s horror sequences is occasionally hindered by the awkward acting or slightly strange location choices. For example, what should have been the film’s most climactic moment takes place while the characters sit around on living room couches.

Yet, Atkinson’s point is eventually driven home. The conclusion of the film exposes the consequences Nate faces if he refuses to give in to the forces attempting to gentrify his physical home, body, and soul. While the elite hipster neighborhoods that incessantly grow through cities may not in fact be hell on earth, their impact is worth examining further, particularly on the lives of the people of color they barrel over. Check out DISPLACED through Salem Horror Fest ‘20’s all-access pass, and see Atkinson’s updated satanic panic for yourself.