Danielle Harris is perhaps best known for her roles in Halloween 4 and 5, as well as her roles in both of Rob Zombie’s entries into the  Halloween franchise. Along with those two major credits, she’s been in a ton of horror films, including the Hatchet series. We recently had the chance to chat with Danielle about her upcoming film, REDWOOD MASSACRE: ANNIHILATION, her favorite version of Halloween, and if she’d ever be willing to return to the franchise!

Hey Danielle, how are you doing?

I’m doing great! So, you have a film coming out on October 20th, REDWOOD MASSACRE: ANNIHILATION! Directed by David Ryan Keith, it stars Damien Puckler, Gary Kasper, and of course, yourself… What can you tell us without spoiling too much, Danielle?

Geez… My character goes back into the woods to seek out who possibly killed her sister the year prior. Her, her dad, and a big group of people that are also connected to the murder – and it’s sort of my journey on trying to figure out what’s going on. I don’t want to give too much away… you’ll have to check it out!

Yeah, I get to kick some ass, which is always great! We shot in Scotland, so it looks unbelievable. We filmed in some really cool places, and my co-stars were pretty awesome – so we had a great time.

What attracted you to the project? How’d you get involved?

Actually, one of my girlfriends called and said she had a project for me that she was supposed to do but couldn’t do it. She thought I’d be great for it, so she sent it to me, and I loved it. I was like, awesome – I’m in. Then literally a week later I was off to Scotland.

What was it like working the director, David Ryan Keith?

He’s great! He wears many, many hats. I had never actually worked with a director that shot their own film at the same time, so that was interesting to see. I thought he did a great job!

REDWOOD MASSACRE: ANNIHILATION is pretty much a straight-up slasher flick. What would you say sets it apart?

Well, I think it sets it among the good ones. It’s got a ton of awesome blood and gore, and it’s got me, of course! It’s got some beautiful cinematography and a really fun story.

If you could sum up the film in one sentence for us, what would it be?

Oh, geez. That’s a hard question for any movie, I think, right? Like, how can I sum up the whole thing in one sentence? A terrifying journey through the woods to uncover secrets – that you maybe never wanted to be uncovered! 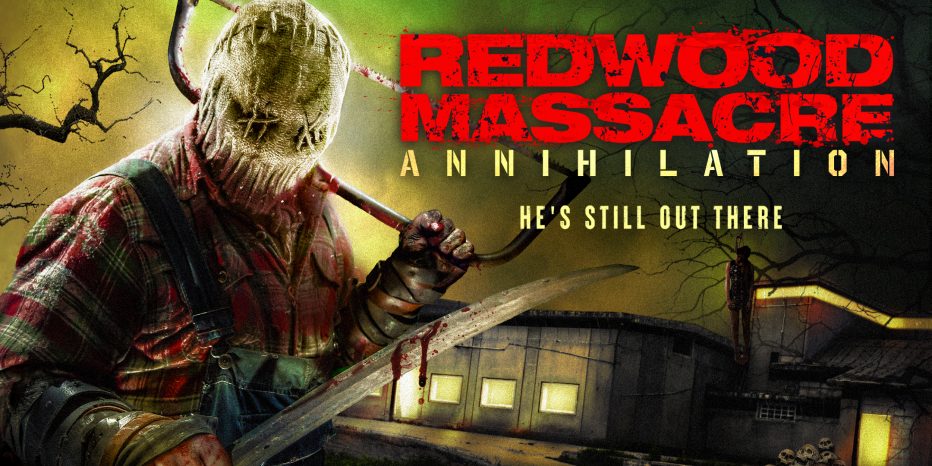 Secrets that should be left secret, I’ll take it! Now you’ve been in a ton of horror films, Danielle. What got you into the genre? Are you a true horror geek?

I am now, but being so young, I was ten years old when I was first in the genre; I didn’t even have any idea what it was. Now, after all these years, it’s definitely made me love the community, and I think we have got something really great here.

Now, you were in Halloween 4, and 5, but then you also came back for both of Rob Zombie’s Halloweens – as a different character. Can you talk about the two experiences and the differences between them?

Well, the differences were just playing a different character, and of course, it being twenty-years later. The movie industry has changed so much since back in the day – and Rob Zombie, so good. Doing movies in the ‘80s and doing movies nowadays – you can’t even compare. It’s crazy. The two [experiences] were really similar. You’re just having fun. It felt like going back home. It actually felt really similar versus different.

Out of the two versions, which would you say that you prefer?

I’ve always kind of liked the old school ones better. That’s just me, in general. I love Rob Zombie’s movies, but they’re totally different. If I had to pick one, probably the older movies.

With the new Halloween films coming out, any chance you would come back again? Make it a triple play?

I probably wouldn’t play someone other than one of the two (characters) that I already was – if I ever went back, because that would be so weird to be a third person. But of course, I’d go back. I’d always go back to do something fun if they were to ask. We shall see…

I’m doing, by myself because I’m stuck in quarantine, a show that I just launched last week on YouTube. It’s called CommenTERROR. It’s a thirty-minute commentary filmed with myself and one of my friends, and we’re sitting there watching one of their films. So, it’s sort of like back in the ’90s when we used to all buy the DVDs with the extras. This is a filmed version of that. That’s sort of my main focus right now.

What gave you the idea to do that?

I have a lot of friends that are famous – and I’ve never seen most of their movies! I was curious to see what made them famous and to connect with someone who does the same thing that I do for a living.

I also saw you just finished filming a movie or did that get delayed?

No, that’s done. It’s called The Host. It’s actually the same production company that did REDWOOD MASSACRE: ANNIHILATION. I really like working with those guys. We finished it about two weeks ago. It’s myself and Mathew Passmore and it’s a story about what’s going on in the world now and all of the demons that find their way into your house when there’s a pandemic.

I’ll have to keep an eye out for it! Now you were also in the Hatchet films, which I love. How was that? That’s a pretty brutal series!

Oh, yeah, but they’re comedy. They’re super fun. We didn’t take ourselves too seriously, even though we’re acting like things are really real. Adam Green’s a great friend, and Kane Hodder – I love that character so much. I love being a part of that franchise.

I feel like it was made for horror fans, and Kane Hodder did a great job. I’ll keep an eye out for your upcoming stuff Danielle, thanks so much for the call!