The creator of one of the 1970s’ most shocking and distinctive psychochillers has departed.

Filmmaker Dante Tomaselli reported on Facebook https://www.facebook.com/dante.tomaselli/posts/10160049119804087 that Alfred Sole (Tomaselli’s cousin) has died at age 78. Originally an architect and interior designer, Sole turned to filmmaking with DEEP SLEEP (1972), an adult film shot in his hometown of Paterson, New Jersey with porn faves Harry Reems and Georgina Spelvin. The movie became a cause célèbre when Sole and others involved were brought up on obscenity charges, including an indictment under archaic anti-fornication laws and a federal charge of interstate transportation of pornography. The cases ended with plea bargains, but Sole was excommunicated from the Catholic Church as a result of the controversy–which led him to make a horror film initially titled COMMUNION, about grisly murders within a deeply Catholic community and a young girl (Paula Sheppard) who becomes the prime suspect.

After brief play under the COMMUNION title beginning in 1976, the movie was rechristened ALICE, SWEET ALICE by distributor Allied Artists, and also opened in a couple of territories as THE MASK MURDERS. The film didn’t make it to New York until 1981, when Dynamite Entertainment released it there (and in other cities) as HOLY TERROR, with a campaign playing off the presence of a preteen Brooke Shields (pictured below at right with Sheppard and Sole), who portrays the first victim and had gone on to become a star in THE BLUE LAGOON. Though it didn’t find great success in theaters, ALICE, SWEET ALICE was discovered by fans on VHS, DVD and ultimately a special-edition Blu-ray from Arrow Video. (Full disclosure: This writer contributed special features to Arrow’s Blu-ray, including an interview with Tomaselli, with whom I wrote the script for an ALICE, SWEET ALICE remake that won Sole’s blessing, and that we still hope to make one day.) 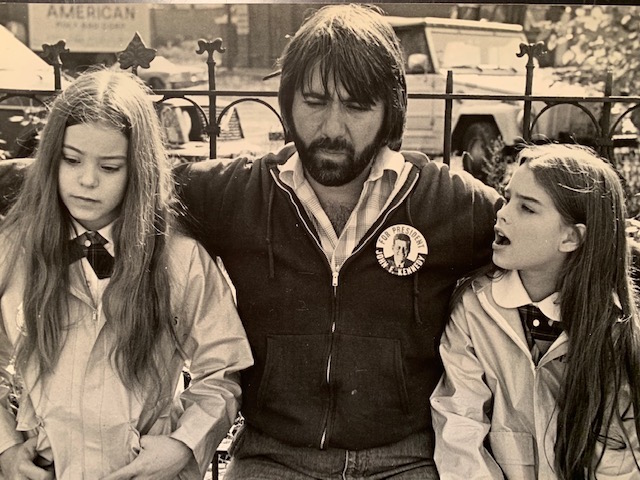 From there, Sole went on to TANYA’S ISLAND (1980), a kind of erotic variation on BEAUTY AND THE BEAST starring D.D. Winters (a.k.a. Vanity) and an ape creature created by Rick Baker and Rob Bottin. He moved on to the slasher spoof PANDEMONIUM (1982), but became disenchanted with politics of studio filmmaking and went back to his earlier vocation, becoming a production designer on numerous feature films, direct-to-video movies and popular series including VERONICA MARS, MOONLIGHT, CASTLE and the recent MACGYVER revival. But he’ll be best remembered for ALICE, which still stands among the most deeply personal works of horror cinema to come out of the ’70s. Rest in peace, Alfred.