14 years later, the seemingly fatal ending of THE DEVIL’S REJECTS (2005) is undone…

In 3 FROM HELL, the homicidal grifters of the Firefly clan (having inexplicably survived a hail of bullets) have their lives medically saved, are tried and then incarcerated. A decade later, Otis (Bill Moseley) is liberated by his at-large brother Winslow “Foxy” Coltrane (Richard Brake) and they initiate a plan to spring Baby (Sheri Moon Zombie) from jail. Afterwards the trio, on the run, decide to cool out in Mexico, where an unfinished piece of their past catches up with them.

I have a fairly conflicted relationship with Rob Zombie’s oeuvre to date, neither despising him nor lionizing him. I had no use for/interest in his HALLOWEEN remakes from 2007 & 2009, and found 31 (2016) to be lazy and execrable. But HOUSE OF 1000 CORPSES (2003) was solidly enjoyable (if a bit unbalanced and indulgent in spots) for a first effort, and I quite liked the majority of THE LORDS OF SALEM (2012), with its various evocations of Carpenter, Polanski and Argento (although the climax – which should have been a horror film bravura moment akin to Kubrick’s  “Stargate” finale from 1968’s 2001: A SPACE ODYSSEY – was instead cheap and underwhelming). And finally there is THE DEVIL’S REJECTS (2005), where all of Zombie’s general influences (70’s grindhouse/exploitation grime, “Manson Family” gestures, and predilection for extreme violence and gore) came together into a satisfying whole. Not a film for everyone, obviously (it lacks a compelling plot, satisfied with merely pitting Committed Evil against Authoritarian Extremism, and choosing to say nothing about that), but still a success as a coherent whole vision. And so here we are 14 years later as Rob Zombie – in a move somewhat akin to Tobe Hooper acceding to make the sequel to TEXAS CHAINSAW MASSACRE – finally cashes in his last valuable chip and throws the dice…

“3 FROM HELL is a fitfully entertaining exercise in ‘more of the same’ as grimy crime film.”

And doesn’t crap out. Not that he has created an excellent film, or even succeeds in outdoing REJECTS, truth be told. But 3 FROM HELL is a fitfully entertaining exercise in “more of the same” as grimy crime film. There are no surprises here (I doubt the intended audience were expecting any) and the characters might have well have been put in jail yesterday for the amount of change they exhibit (It seems Baby is a little bit more unhinged – or, as Otis says “she’s gotten wacky”) and while Zombie still milks the Manson parallels (pop media converts on the outside, references to “The Devil Rejects cult”) he still never works to convince us that the Fireflys are anything but crazed rural killers. Unlike Manson they are not charismatic, aren’t recruiting anyone, and have no specific philosophy outside of a nihilistic “live until you die and indulge your every whim.” In the only contemplative moment of slow down Baby asks Otis, with everyone they know now gone, “Do you ever think maybe it’s not worth it?” but of course his answer is the usual dead-end viewpoint (“Let’s go get fucked up and do some fucked up shit”).

The first half of the film feels tight and cramped, with a sickly washed-out look (which may be intentional as it occurs mostly in institutions and suburban living rooms, but that doesn’t make it enjoyable) and the only real conflict engaged is “how do you successfully spring someone from prison when you AND they are insane?” The movie opens up a bit in the second half and utilizes Mexican landscapes, Day of the Dead imagery, comic books, Luchadora masks, seedy hotels/bars, and mirror balls to become a bit more visually interesting effect, as it asks “What even ARE your future plans when you are insane homicidal criminal?” Again, not that it feels it has to have an answer. The Fireflys, as characters, are not active but reactive and so the story generally has them stumbling into events or chaotically creating them and then running away. “Money? What am I gonna buy?” asks Otis when offered cash in exchange for a life. 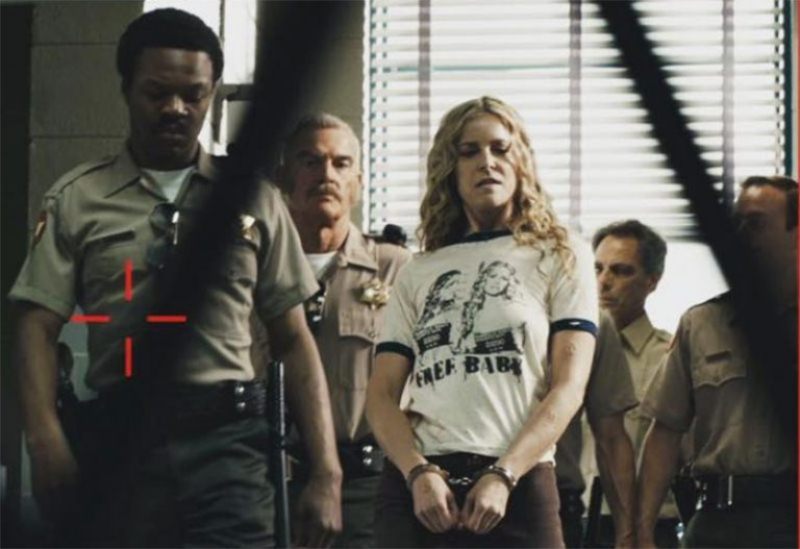 There are a number of bones thrown to fans of the previous films: Tiny gets a nice call back, and THE HUNCHBACK OF NOTRE DAME and THE THREE STOOGES get some screen time, there’s a ubiquitous (and honestly, kinda shoe-horned) clown sequence, instead of a righteous Sheriff we get a coked-up Warden (all the members of “straight” society are poorly dressed goons), and it seems as if “In A Gadda Da Vida” is going to be this film’s “Freebird” before it’s abandoned in a sense of “been-there done-that.” While the “suburban living room massacre” doesn’t really top the previous film’s “hotel room atrocity” sequence, I did enjoy the knife-throwing contest scene.

Is 3 FROM HELL a good film? It’s hard to say. If you hate Zombie’s work you have no reason to see it. If you liked THE DEVIL’S REJECTS you’ll probably like it – although it really only begins to be enjoyable in the second, more action-packed half. But then, you roughly knew what you were getting into when you sat down to watch it, I assume.

3 FROM HELL is currently in limited release through Fathom Events, and will then be released on Blu-ray on October 15th.