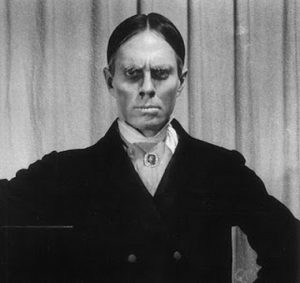 And #2 is John Zacherle, “King” of the the Horror Hosts (to Vampira’s “Queen”) as Zacherley, the Cool Ghoul. He debuted in Philadelphia (after playing an undertaker on a local TV western) hosting SHOCK THEATER live as “Roland” (long “o”, please) in 1957, then moved to New York City and varied his birth name to become “Zacherley” (SHOCK THEATER, ZACHERLEY AT LARGE, THE ZACHERLEY SHOW). He was an overnight sensation with teenagers and helped kick off the “monster kid” generation of rock-n-rollers who were raised on the Universal horror movies showing up on late-night TV shows, various drive-in creature feature revivals on the big screen, horror comics, the “Monster Mash”, et. al. 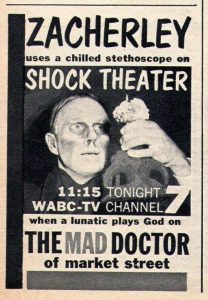 Zacherley is the quintessential horror host for any number of reasons – he hosted the Universal films “Shock” package (which – when distributed to TV stations in 1957 – kicked off horror hosting all over the country), he connected with the youth generation to such an extent that early rock-n-rollers (The Flattops, Billy Duke & The Dukes) wrote songs about him, he hosted dance shows and live appearances and helped introduce the “sick” humor current of the 1950s (MAD magazine, Charles Addams cartoons, novelty songs, etc.) to television through his humorously macabre patter, slapstick/gross-out sketches and tin-pan alley parody songs (with altered lyrics, of course). During the post “Monster Mash” boom, he recorded a number of very funny and catchy “spooky song” albums and had a top 10 hit with “Dinner With Drac” in 1958. Zacherley “ran for president” in 1960, was a radio DJ for quite some time, edited 2 horror anthologies, introduced concerts for The Grateful Dead, and voiced Aylmer the talking parasite in the wonderfully disturbing and underrated hallucinogenic horror film BRAIN DAMAGE (1988)! Quite a career!

“Zacherley is the quintessential horror host for any number of reasons”

I’m convinced Zach’s look is based somewhat off of Lon Chaney’s Phantom of the Opera, with the make-up reduced for easy TV application – slicked hair, hollowed eyes, the classic “cheekbone” greasepaint, those hideous lips. I’ve always thought his long undertaker’s coat and conspicuous, arcane medallion were distinctive costume choices – it gives the character an odd dignity, which he was always careful to play up. Zacherley’s “ghoulish jokes and puns” approach to horror hosting (one of the 4 basic horror host models – I’ve come to refer to this one as “The Sardonic Creep” style – arising out of horror radio drama’s INNER SANCTUM host Raymond, and the EC comics horror hosts like The Crypt Keeper) was in line with Vampira, but Zacherley’s character has a wonderful joviality to him, with an uproarious, welcoming, insinuating laugh always waiting to bubble up, reinforcing the comical goings-on and bringing voice to a world where the classic monsters all hung out together like “normals” (John Zacherle also had a killer smile and could furrow his brow in a wicked scowl to punctuate a gag!). 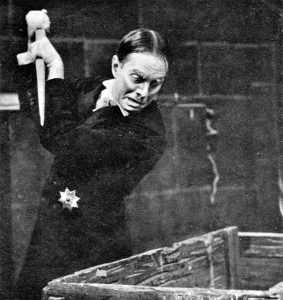 In truth, Zach also has aspects of the second type of Horror Host, “The Clown” (which I will introduce in a later post). After having seen THE ZACHERLEY ARCHIVES, which collects all extant footage & kinescopes of his shows, I would also say that Roland was a slightly different character than Zacherley (although that may just be down to not having the bit “solidified” yet) – Roland is grumpier and more aggressive, a little bit madder, while Zacherley indulges in more physical comedy and sight gags. Both are quick with the ad-lib, whether verbal or expressive, with Zach also having some Jack Benny mannerisms and the occasional Bob Hope-styled “muttering distractedly to himself” delivery. As might be expected, there’s not a lot of footage around of his original shows but the below link is the entirety of THE ZACHERLEY ARCHIVES – for the quick tour, I’d suggest jumping to 8:52 (for Roland) and 26:53 (for Zach) (Interestingly, the last sequence on here is the season closer where a distracted and sombre Zach is entertaining invisible guests while the taciturn and burly “Dr. Bellevue” arrives and plays along…for a time).

THE ZACHERLEY ARCHIVE – the only remaining footage

Zacherely’s set was always some kind of crypt/mad scientist laboratory, housing his unseen wife residing in a basket (referred to as “My Dear” or “Isobel,” her “voice” manipulated recordings of chattering monkeys) as well as his son Gasport and assistant Janos, both similarly elusive. He was probably the first Horror Host to visually “insert” himself into the movies – using matching cutaway shots (Bela Lugosi, looking for someone, opens a door into an empty room the viewer can’t see into, cut to Zacherley on-stage in a bathtub, looking shocked, cut to Lugosi closing door and continuing on) and he used to perform “experiments” like electrocuting toys with a miniature Jacob’s Ladder. His most famous skit (which he repeated many times) was “the dissection of the prehistoric amoeba” in which a large, colorful gelatinous blob – wrapped in cheesecloth, all the while wobbling and chittering – would be slowly sliced open, spilling Jell-o everywhere as Zacherley rooted around inside, lecturing all the while, uncovering primitive bones (leftover chicken leg) and a rudimentary nervous system (cooked spaghetti – which Zach would then nonchalantly consume) – it’s a perfect comedy sketch for a horror host, disgusting and funny all at once!

Zacherley was probably the first TV horror host that I was *aware* of (thanks to ads in the back of CREEPY magazine for his anthologies and a chance discovery of one of his records owned by the mother of a good friend – I was fascinated by songs like “Popeye, The Gravedigger” and “Gravy with Cyanide”). I never got to see Zacherley host any of his original shows because I was too young, but I did get to meet the man himself at a Chiller Convention in New Jersey in the mid-90s. We all watched him do the amoeba skit live and later I shook his hand. I wish I’d had a photo taken! Here he is on THE MIKE DOUGLAS SHOW:

Zacherley truly is the King of Horror Hosts (certainly of the East Coast) and his character and presence is sorely missed (John Zacherle passed away on October 27, 2016 at the age of 98). As I said, that affable, jovial laugh (nothing creepy about it, really) and welcoming persona meant a lot to children as they watched scary movies late at night in the 50s and 60s, and he was a great and enthusiastic spokesman for the hallowed tradition. And so, I’ll close with Zacherley’s famous sign-off line: “Goodnight, whatever you are!”

“(the amoeba dissection)…is a perfect comedy sketch for a horror host, disgusting and funny all at once!”