RETROSPECTIVE: ATTEND THE TALE… THE STAGE HORROR-MUSICAL OF “SWEENEY TODD: THE DEMON BARBER OF FLEET STREET” (1982) 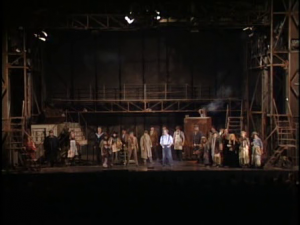 “He served a dark and a vengeful God…”
Outside of the actual campfire of legend, the classical source for storytelling is the theater and this is as true for horror as for any other genre. The musical as a stage-form, though, has not lent itself as easily to the violent and macabre (well, barring opera). Yet an entertaining, enjoyably thrilling and exceedingly dark example awaits those willing to move outside their comfort zones and embrace something that they might not normally associate with horror. I’m speaking of SWEENEY TODD: THE DEMON BARBER OF FLEET STREET – but NOT in its more familiar (if decidedly less powerful) Johnny Depp film version from 2007. Instead, I direct you to the 1980 touring company performance transmitted on The Entertainment Channel in 1982, and easily available for your viewing pleasure on Vimeo. It will reward those seeking dark and bloody delights…

“He trod a path that few have trod…”
The story of Sweeney Todd, who murdered his clients and had their flesh sold in meat pies, originates from various urban legends that were codified in the popular consciousness by the “penny dreadful” serial THE STRING OF PEARLS (1846-1847, authorship variously attributed), and numerous stage and screen adaptations (perhaps most famously SWEENEY TODD: THE DEMON BARBER OF FLEET STREET from 1936, with the aptly named Tod Slaughter in the title role) before the much lauded Stephen Sondheim musical arrived in 1979. Interesting variants can be found in the 1970 ITV episode of MYSTERY AND IMAGINATION starring Freddie Jones (which presents a more abstract and psychological version of the melodrama) and the aborted comics adaptation by Neil Gaiman and Michael Zulli for TABOO. As stated, though, we are discussing a touring version of the Sondheim musical filmed before an audience in Los Angeles in 1981. 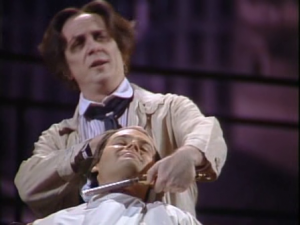 “There was a barber and his wife…and she was beautiful…”
Sweeney Todd (George Hearn) — once simple barber Benjamin Barker framed by lecherous Judge Turpin and sent to Australia as a convict — returns to London and find his rooms now occupied by slatternly Mrs. Lovett (Angela Lansbury), a failing pastrycook. She informs him that Barker’s wife took poison and the Judge is now the ward of his daughter Johanna, whom he plans to marry. As he resumes his role as barber and plots his revenge on the Judge, the plans go awry and Todd succumbs to his obsessional madness, concocting (with the greedy Lovett) a hideous new plan to punish the world for his pain (and her poverty)… but fate works both for and against him…

“There’s a hole in the world like a great, black pit…”
Audiences may first be taken with the story’s audacious staging, its grimy Victorian street people cast as an ominous Greek chorus, its inventive revolving and movable sets, and the shrieking workhouse whistle that punctuates scenes like nails on a chalkboard. And the story itself engages at so many levels, from the Romantic (Anthony and Johanna’s fraught love that moves the plot) to comic (pompous barber Pirelli, Mrs. Lovett’s broad and dotty music hall character) to grieving (that Barker did not start as a bad man is uppermost in the narrative). And then there are Sondheim’s catchy, menacing and memorable songs (try getting them out of your head the following day). But what is really striking is how the writing and the acting combine to carry a foreboding feeling of dark madness throughout the whole work.

“We all deserve to die!”
And here it’s George Hearn who’s a marvel (although note that Lansbury is given top billing). With his horror host looks and brooding intensity (“He seldom laughed but he often smiled”) Hearn fully inhabits the emotional range demanded by the character, from tenderness to grief to anguish and the righteous vengeance that drives a good man mad. In fact, the culmination of Act One is a masterpiece of dark contrast as, seeing his revenge slipping away, Todd’s mind snaps and ultimate nihilism leaks through (“Epiphany”). As he rages and roars against the world, Hearn glares past the proscenium arch, threatening the audience itself (“I will have…YOU!”) before deflating into numbed stupor – from which he is revived by Lovett’s comically avaricious “modest proposal” (“A Little Priest”) which sparks his now lunatic ambition and imagination. In fact, this deliberate alternation/contrast is a hallmark of the play, providing both humor (one can laugh at Lovett’s presumptions of retirement “By The Sea” with their twisted, makeshift “family,” but there’s never any doubt that Todd’s cold lack of response lies in his inability to conceive of ANY future beyond his vengeance) and pathos (“Johanna–Quartet,” plays out as love – sought for and lost – is delicately proclaimed by the male leads, as Todd settles into his routine of slaughter). Even the early line about why the beautiful nightingales sing in the daytime is a subtle detail underlining the play’s grim concerns. 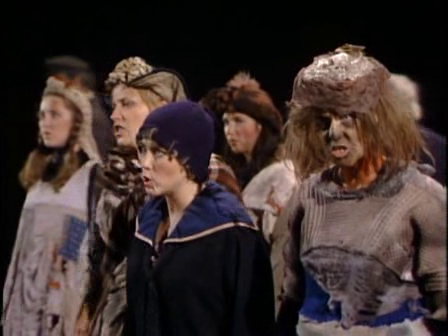 “Rats in the streets and lunatics howl at the moon!”
As throats are slit, bodies pile up, the mob demands more flesh, and Bedlam itself is breached, the production reaches a fever pitch of almost operatic proportions, and the story resolves on a stage strewn with corpses. Ultimately, while SWEENEY TODD may be seen as a narrative about destructive obsession, it is almost equally a story about betrayal. Lovett betrays Todd in keeping details of his wife’s fate from him, and betrays Toby by playing at mother until expediency makes him disposable. Todd betrays the memory of his wife and daughter by allowing his bloodthirst to extend to the innocent. And Todd himself is betrayed by society, which allows a corrupt judge to wantonly destroy lives and innocence at his whim, with no expectation of justice (one could argue that here “Justice” takes the innocent and guilty alike). The revolutionary class concerns embodied in the Darwinian, cannibalistic and Capitalistic scenario are even addressed in lyric (“How gratifying for once to know / That those above will serve those down below!”). As the steam whistle shrieks one final time, the dead and living rise and take the stage to reprise the lesson (learned or unlearned) before a searching look, a final scowl and the slammed door of the grave.

“But everyone does it, and seldom as well..”
If nothing else, watching this production should forever banish the anemic 2007 Depp film vehicle from your memory. Should you chose to revisit it, marvel at how flat and routine it feels in contrast. Where Hearn is brooding and morosely anguished, Depp is merely numb and disaffected, while Carter transforms Lansbury’s desperate and amoral comic foil into a cold and mechanical sex doll. Perhaps it has to do with the fact that neither Depp nor Carter seem to have singing voices within the range assigned to the roles (Bass-Baritone and Contralto or Mezzo-soprano, respectively) . Perhaps its the flashy CGI camera rushes through fake London, or the absurd costuming/makeup choice to go “Victorian Goth” (both Depp and Carter are so pale they look like the undead). But, of course, you get more blood and violence for your ticket…and all you seem to lose is heart and soul. For that, you need the stage.

“…the story resolves on a stage strewn with corpses” 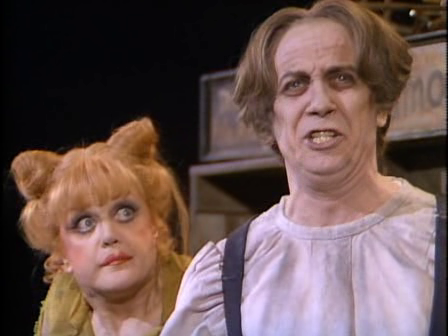