House of Wax (1953) is an incendiary swath of auld lang syne cinema that continues to spark fiery enthusiasm for one of Vincent Price’s most memorable horror film roles. The macabre movie maestro made his Silver Screen debut as Robert Wade in Rowland V. Lee’s Service de Luxe in 1938 – a lighthearted comedy – but it did not take long for Price to appear in his first fright feature: The Invisible Man Returns (1940).

Price’s legacy as a vaunted member of the Universal Monsters society alongside Bela Lugosi, Boris Karloff and Lon Chaney Jr. was secured but quite minimal as he only reprised the role of the Invisible Man once in a brief cameo at the conclusion of Abbott and Costello Meet Frankenstein (1948). Neither is what horror aficionados would consider true scary movies by any stretch of the imagination. However, Price’s reputation for dabbling in cinematic fear truly emerged in the classic House of Wax.

More salient in House of Wax than any three-dimensional gimmick is the presence and professionalism of Price. He commands the screen from the dawn of the picture which incites disaster for poor Professor Jarrod (Price). Vincent brings both an eloquence and pithiness to the character of Jarrod as the protagonist-turned-antagonist suffers through a character arc that eventually spells doom for the disfigured artisan.

3-D technology was laboriously promoted with the release of House of Wax six decades ago, but it has no distinction with modern-day audiences. No one in 2018 says, “I can’t wait to watch the awesome 3-D effects in House of Wax!” No, it is the performance of Price along with the well-crafted story, an ominous mood and the haunting score composed by David Buttolph that endears the must-see film to fans today. And unlike Jarrod’s beloved Marie Antoinette, House of Wax will live forever.

House of Wax celebrates its 65th anniversary on April 9, 2018. After debuting in New York City, the film enjoyed a Los Angeles premiere on April 16, 1953 before opening nationwide on April 25.

Horror movie icon Bela Lugosi may not appear in House of Wax, but he did take part in the promotions. During the Paramount Theater’s premiere on April 16, Lugosi arrived in a vampire cape as a publicity stunt. Lugosi sported a leash attached to an actor in an ape costume! This is clearly a nod to William Beaudine’s much maligned movie Bela Lugosi Meets a Brooklyn Gorilla (1952).

Psycho (1960) and Psycho II (1983) actress Vera Miles was considered for the role of Sue Allen in House of Wax, but the role was won by Phyllis Kirk. Kirk did not want to do the project though and tried her best to turn it down. Unfortunately for Kirk, she was under contract at Warner Bros.

Actor Vincent Price secretly attended screenings of House of Wax, according to biographer Joel Eisner. On one such visit, Price revealed himself to audience members though. Mr. Price was sitting behind two teens and leaned forward into their ears during a scary sequence. “Did you like it,” Price asked. And in Vincent Price’s own words regarding the teenagers’ reactions: “They went right into orbit.”

She’s creepy and she’s kooky! Actress Carolyn Jones played Cathy Gray in House of Wax but is best known for the beloved role of Morticia in The Addams Family (1964-1966) television series.

House of Wax is often touted as the first 3-D feature film from one of the major American movie studios, but it is hardly the innovator when it comes to three dimensions. A mere one day (April 8, 1953) before House of Wax premiered in New York City another 3-D picture had its debut. The film was Columbia Pictures’ Man in the Dark (1953) which made it the first 3-D flick released by a major studio. However, it is a black-and-white venture, so the mantle of first color 3-D film by a major studio lies with House of Wax. If you go all the way back to the Silent Era, you’ll discover where 3-D all began with the now lost picture The Power of Love (1922).

Don’t lose your head! The guillotine used in the House of Wax climax was not a prop or façade. It was an authentic killing machine.

During the first-act sequence in which the museum burns down, the crew set three small fires strategically on set. Unfortunately, the fires burned out of control and combined with one another into an inferno. The flames are said to have forged a hole in the sound stage’s roof while also searing Price’s eyebrows. Unbelievably, director Andre De Toth kept shooting until firefighters arrived on the scene! Wait, really?

In the book Price of Fear: The Film Career of Vincent Price (1993), actor Vincent Price revealed how he was shunned and banned from the studio commissary because of his grotesque make-up. Price’s troubles began, and he was subsequently banished from the restaurant, when a cashier turned green and almost passed out from seeing Price made up.

Igor is portrayed by the late actor Charles Bronson who is credited as Charles Buchinsky. Bronson was often typecast as tough, gritty and action-oriented characters like Paul Kersey in Death Wish (1974). These traits can be seen right from his film debut in 1951’s You’re in the Navy Now. In an uncredited role, Bronson gets to trade lines with Hollywood legend Gary Cooper when the sailor is reprimanded by Lt. Harkness.

Ironically, director Andre De Toth (The Gunfighter; Pitfall) was blind in his left eye, because of a childhood accident that stole his sight, so he was unable to perceive the three-dimensional effect House of Wax is so famous for.

House of Wax is a remake of the film Mystery of the Wax Museum (1933). While Vincent Price clearly carries his version of the story, Hollywood heavyweights Fay Wray, Michael Curtiz and Lionel Atwill helm the original. Actor Atwill was a mainstay for Universal’s horror films while Wray was best known for her precarious on-screen romance with a larger-than-life co-star: King Kong. Director Curtiz brought iconic films to the masses including Casablanca (1942) and White Christmas (1954).

With a budget of $1.5 million, and a scheduled 60-day shoot, director Andre De Toth completed the production in approximately 30 days for just north of $600,000. Warner Bros. cleaned up at the box office over the years thanks to their macabre movie House of Wax. The film has taken in a domestic gross of almost $24 million since its 1953 premiere.

In December of 2014, Library of Congress press contact Sheryl Cannday revealed that House of Wax was one of the newest cinematic treasures to be added to the National Film Registry. “It added the dark talents of Vincent Price and helped introduce 3-D visual effects to a wide audience. ‘House of Wax,’ produced by Warner Bros. and released in April 1953, is considered the first full-length 3-D color film ever produced and released by a major American film studio.”

Nedrick Young portrays the alcoholic assistant Leon but wasn’t credited in the picture. Sadly, he had been blacklisted by Hollywood during the embarrassing Cold War’s “Red Scare,” which resulted in witch hunts for communists and their sympathizers.

Even with a runtime of only 88 minutes, House of Wax had an intermission. In the book Ghouls, Gimmicks and Gold: Horror Films and the American Movie Business, 1953-1968 (2004), author Kevin Heffernan discusses the need for the break in what is a short production by today’s standards: “A complex interlocking mechanism that enabled two-projectors to run in sync (a process that necessitated an intermission to change reels an hour into the film…”

House of Wax  premiered in New York City on April 9, 1953, and has made over $23.7 million domestically since opening in theaters 65 years ago. 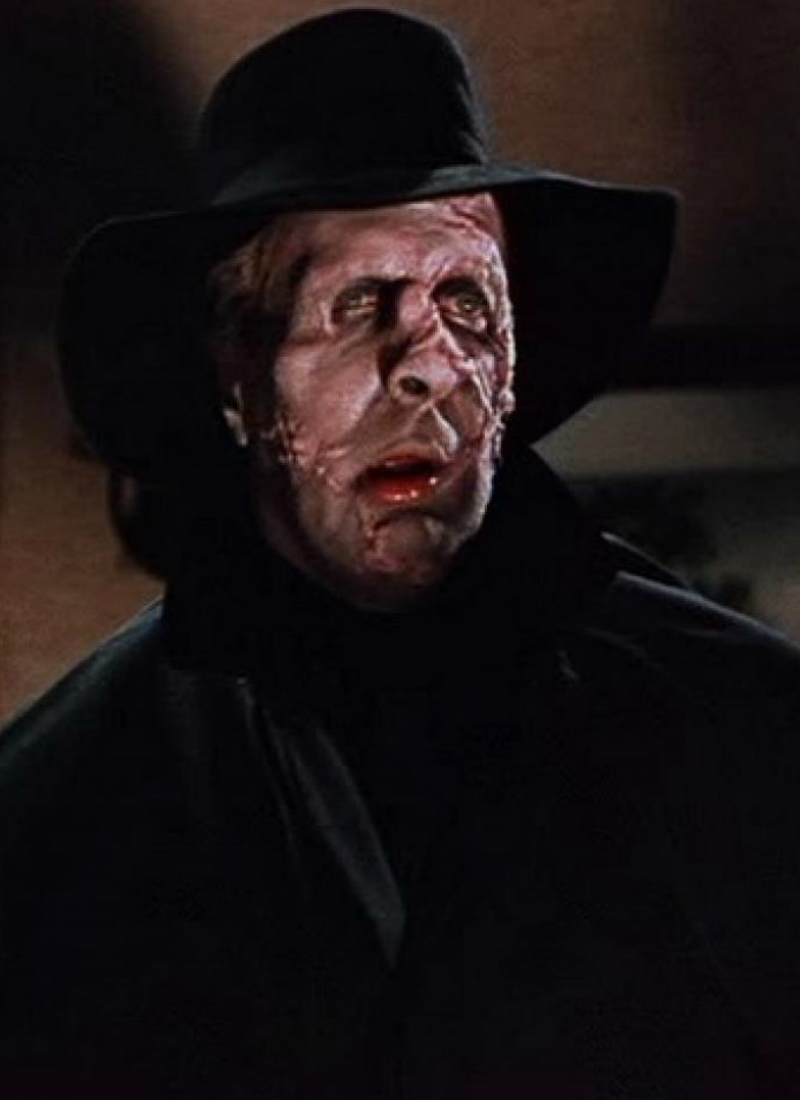