When considering similitude in cinema, if Michael Myers is indeed derivative of the Frankenstein monster, does that make filmmaker John Carpenter our generation’s modern-day Prometheus? Certainly, Carpenter’s creature creation in Halloween (1978) did more than mirror a powerful and seemingly unbeatable brute. The Shape literally changed everything.

The emergence of this particular killer, and his film, redefined the horror genre and reshaped macabre movie making. The slasher flick not only came to prominence but filmmakers found it fashionable to center their scary movies around a number of other significant calendar dates (Friday the 13th, April Fool’s Day, My Bloody Valentine).

But still there is only one Halloween. Well, what about Rob Zombie’s 2007 version or the new 2018 incarnation? Ah, who’s counting? Genre fans know it all came courtesy of Carpenter’s seminal picture. But to answer the question posed earlier is a bit more complicated. Prometheus? Well, we know Carpenter is at least a cinematic scientist –  a creator.

Carpenter gave an entire subgenre of fright life. There are no holiday horror hits without Carpenter, and Sean S. Cunningham’s Friday the 13th (1980) would not have been able to rip off Halloween. And that’s exactly what Cunningham told his screenwriter Victor Miller they were going to do. Wait, does that make Cunningham Dr. Pretorius?

There’s not much to say about Halloween that hasn’t been explored before. Michael Myers breaks free, comes to Haddonfield and stalks Laurie Strode (Jamie Lee Curtis) and her carnal companions. It’s a simple premise. Despite the lack of blood, gore and an antagonist’s motivation, Halloween continues to spark critical analysis from new fans and young critics discovering the film for the first time. As Dr. Frankenstein once said, “it’s alive!”

Carpenter isn’t Prometheus. He’s not stealing fire from the gods and bringing it to humanity. No, he is forging the fire. Most people can only imagine what it feels like to be a deity, even on a filmmaking level, but John Carpenter lives it. And Michael Myers will always sit at his right hand. However, God is not perfect. During an interview with Mark Gattis, Carpenter referred to Val Lewton as “overrated.” Well, nobody’s perfect, but Halloween comes very, very close.

Producer Debra Hill said in interviews that the character of Laurie Strode was named after John Carpenter’s very first girlfriend.

Cinematographer Dean Cundey was inspired by Chinatown (1974) starring Jack Nicholson for his work on creating the look of Halloween. Cundey duplicates the burnt orange daylight color scheme along with the blue-lit moonlight of nighttime from Chinatown throughout Carpenter’s film.

Actress Jamie Lee Curtis was not John Carpenter’s first choice to play Laurie Strode. He wanted Anne Lockhart. After she turned him down, Carpenter was told by producer Debra Hill that Jamie Lee would be perfect in the role.

Actor David Kyle has the privilege of having cinema sex (off-screen) with actress Sandy Johnson who plays Michael Myer’s sister Judith. Credited as simply “the boyfriend,” Kyle’s character seemingly sets a record for making love. The pair goes upstairs while Michael watches through the windows. A mere 66 seconds later, the boyfriend glides down the stairs and goes home. Wait, what?

Will Sandin portrayed young Michael Myers in the opening sequence of Halloween. Now, while his character went on to be one of the cinema’s biggest baddies, Sandin grew up to become a Los Angeles law enforcement agent. Halloween is his one and only acting credit.

It’s always the quiet ones. Jamie Lee Curtis’ character of Laurie Strode was clearly an introverted outcast. But the repressed teenager had poster of a painting created by the expressionist artist James Ensor in her bedroom. Ensor was known to compose humans wearing grotesque-looking masks. But Laurie’s poster is of a man in a flowery hat.

John Carpenter says he based Michael Myers on the character of the Gunslinger (Yul Brynner) in Westworld (1973).

In 1979, a novelization of Halloween was published by Curtis Richards which is a pseudonym for author Dennis Etchishon. The book has been out of print since the late 1980s and is quite rare. The story digs deeper into the character of Michael Myers, and shows the Shape ruling over the other patients he is locked up with.

Laurie Strode tells Annie (Nancy Loomis) that she’d like to go out with Ben Tramer. The character of Ben is named after John Carpenter’s college friend Bennett Tramer. Bennett is best known for his work on the television show Saved by the Bell (1989-1992).

There’s very little known about Michael Myers and the same is true about Dr. Samuel Loomis. Named after the character of Sam Loomis (John Gavin) in Psycho (1960), Loomis was supposed to have a wife. In fact, a scene was written in which Loomis talked to his bride over the phone. However, this never happened because actor Donald Pleasence felt his character should not have a family.

Despite being the protagonist who saves Jamie Lee Curtis’ Laurie Strode from the Shape, Dr. Sam Loomis only appears on screen for a grand total of 18 minutes.

John Carpenter is a fan of Bob Clark’s Black Christmas (1974). Carpenter admitted in interviews that he asked Clark if he could write a sequel.

Because Halloween was shot in the spring of 1978, the filmmakers had a very tough time finding pumpkins.

John Carpenter and Debra Hill were interested in casting actor Dennis Quaid in the role of Lynda’s (P.J. Soles) boyfriend Bob. Unfortunately, Quaid’s schedule wouldn’t allow him to take the part, so the role went to John Michael Graham. Quaid and Soles were dating at the time.

The stabbing sound of Michael Myers’ knife was created by plunging the weapon into a watermelon.

It only took John Carpenter four days to compose the now famous score to Halloween.

John Carpenter is the voice of Annie’s boyfriend Paul who we hear talking to both Annie and Lindsey over the phone during the film.

Producer Debra Hill wrote the majority of dialogue for the female characters while John Carpenter took care of Dr. Loomis.

The films appearing on television during Halloween include Forbidden Planet (1956) and The Thing from Another World (1951). Carpenter, of course, remade the 1951 classic with his own version titled simply The Thing (1982) starring Kurt Russell.

Kyle Richards is the actress who played little Lindsey Wallace in Halloween. She nabbed the role after appearing in John Carpenter’s Assault on Precinct 13 (1976). Richards is known by modern-day television fans as a star on The Real Housewives of Beverly Hills (2010). Her sister Kim also appeared on the show.

Halloween cost $325,000 to produce and the film has made $70 million worldwide. $25,000 of the budget went to veteran actor Donald Pleasence who only worked on set for five days of the 20-day shoot. The late Mr. Pleasence truly brought gravitas to the project. Pleasence arguably became the face of the franchise alongside the character of Michael Myers as Donald portrayed the doctor in a total of five Halloween pictures. Sadly, he passed away shortly after completing work on Halloween: The Curse of Michael Myers (1995).

Speaking of being the face of the franchise, William Shatner definitely has an argument. Fans know that the Shape’s mask is nothing more than a Bill Shatner/Captain Kirk mask painted white with enlarged eye holes, plucked eyebrows and teased hair. But did you know Mr. Spock was also in contention as the Shape’s disguise? Tommy Lee Wallace said that he also grabbed a Spock mask as one of the choices for Michael Myers. He also brought John Carpenter a Richard Nixon and an Emmett Kelly (clown) mask. The Kirk mask cost less than $2, and Shatner stated in interviews that he was flattered by sort of being in Halloween.

Christopher Lee turned down the opportunity to play Dr. Sam Loomis as did Peter Cushing. Irwin Yablans was not keen on John Carpenter’s choices of horror mainstays Lee and Cushing playing the role of Loomis. Yablans feared Halloween would be viewed as simply another Lee/Cushing [Hammer] flick. Years later, Debra Hill recounted an encounter with Lee and how he deeply regretted passing up the part.

It’s not unusual for older actors/actresses to play younger parts in the cinema and Halloween was no exception. Of the three female stars, only Jamie Lee Curtis was truly a teenager. P.J. Soles was 27 years old at the time of the film’s release and Nancy Loomis was 28.

With the film being shot largely out of sequence, John Carpenter created a fear meter for actress Jamie Lee Curtis. This way Jamie would know how scared to act from day to day. Halloween was Curtis’ first movie, and she was terrified of losing her job. Curtis felt her initial day’s work was so terrible that she was sure to be fired. Carpenter called her up and put her mind at ease, but Jamie thought he phoned to sack her. And the rest of the story is horror history.

John Carpenter might have been a recent USC film school graduate, at the time, but he knew how to tell stories and create character development. Carpenter did not want audience members to be able to relate with the movie’s antagonist. Thus, there was very little backstory for the aptly named Shape (in the script). This also explains the pale, unidentifiable face of the white mask.

Jamie Lee Curtis might have been starring in her first film, but she was already Hollywood royalty thanks to her family. Both her parents were successful thespians, and they had ties to horror. Mother Janet Leigh played Marion Crane in Alfred Hitchcock’s Psycho (1960) while father Tony Curtis was the uncredited voice of Donald Baumgart in one crucial scene of Rosemary’s Baby (1968). Jamie reportedly made $8,000 for Halloween while on break from her television show Operation Petticoat (1978-1979). Jamie also appeared as a guest star on Columbo (1977) and Charlie’s Angels (1978).

Halloween was originally titled The Babysitter Murders. Producer Moustapha Akkad was intrigued by the notion of babysitters because this was a concept everyone could relate to. He knew it would resonate with audiences, but Moustapha was worried when John Carpenter and Irwin Yablans said the picture could be made for only $300,000. This figure seemed very low to Akkad. In interviews, Moustapha said that he was directing a film at the time that had a budget of nearly $300,000 a day. That picture was 1976’s The Message starring Hollywood icon Anthony Quinn.

Things must have been pretty easy for the wardrobe department’s Beth Rodgers. The actors wore their own clothes on the production. Jamie Lee Curtis even shopped at J.C. Penny to create Laurie’s look, and she spent less than $100.

Since Halloween was shot in California, the crew painted paper leaves to simulate the season of fall in Haddonfield. The illusion might have been more effective if not for the presence of palm trees in the background of those early scenes where Laurie is walking to the Myers’ house before going to school.

“The blackest eyes, the devil’s eyes.” 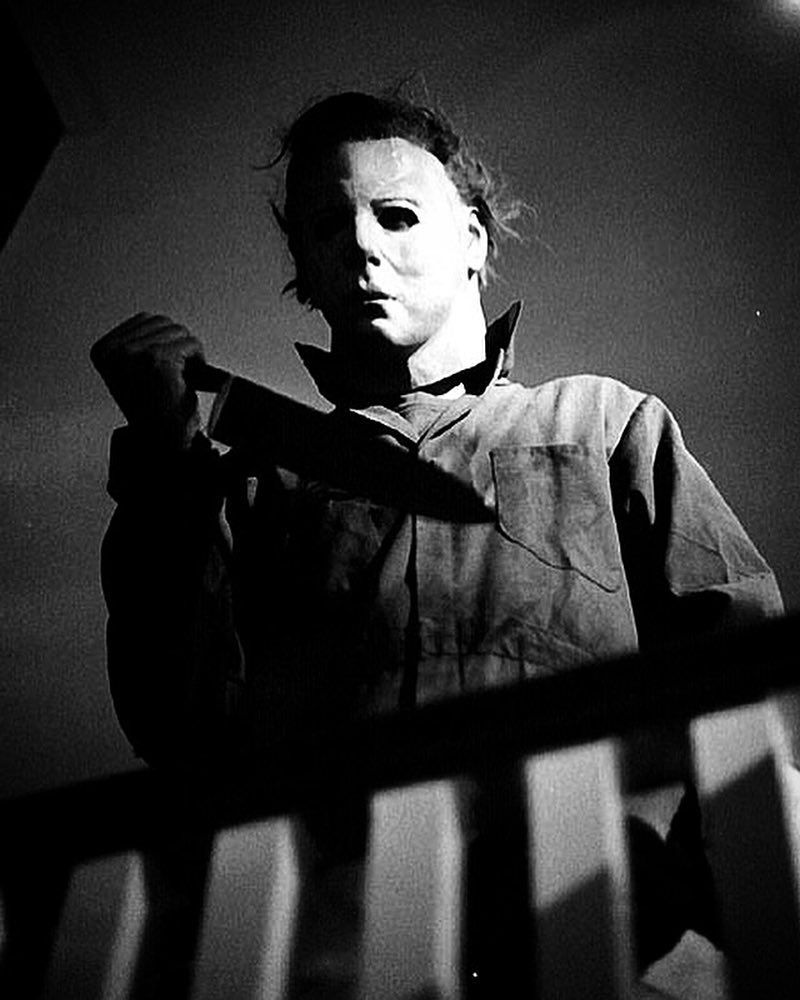