Skinner and  House of Gog team up once again for “RELIC OF A JUPITER TOMB” art statuette (their previous collaboration which we covered can be found here). This out of this realm statuette is based off original artwork by the artist from Oakland simply known as Skinner. Made from 100% high quality polystone resin. This limited numbered edition is 300 units (worldwide) and comes signed by hand by Skinner. House of Gog is known for its large scale statues so this smaller scale statuette (9H x 6W x 6D (inches) / 23H x 15W x 15D (cm) is new ground for them. Staying true to the original artwork is not only a goal but a must for House of Gog. To stay loyal to Skinner’s art style, each statue is “freehand” hand-painted (with brush) and airbrushed by artists, making each individual piece unique in its own way. Small variations are expected, adding to the “hand-made” nature of this high-craftsmanship collectible. 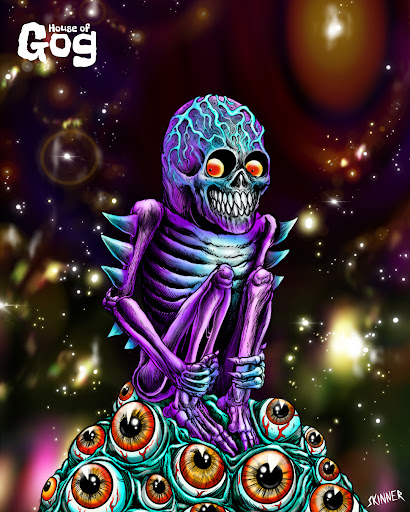 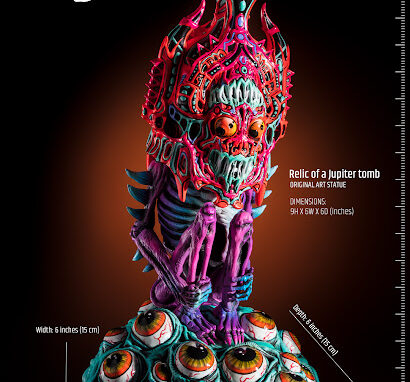 “The men found the relic within the monolithic sarcophagus of Jupiter. They had been trapped for days now, the storm outside having destroyed their ship, leaving them stranded. It was lucky that their space suits had kept them alive this long, but the oxygen wouldn’t last another day….

They came in response to a bizarre and consistent distress signal…odd chattering…voices maybe? Some kind of multi layered recording that had the distinct human vocal timbre that was enough to instigate a rescue mission.

Rations were low and the chances of the space men getting rescued was nigh impossible considering the massive permanent storm that Jupiter is known for. After some discussion they chose to explore the vast labyrinthine catacombs they were trapped in. Every chamber was empty besides the massive tombs and bizarre sculptures that lined the walls of the place like hideous columns clawing at the sky. Strange engravings and a millennia of dust was barely visible to the men through their space visored helmets. All was quiet ancient death here.

When they found the relic, it was alone, squatting in the center of the darkness. The impossible oddness of it bothered the men, but they were on borrowed time, so their curiosity won the day. The closer they got to it, the better they could see its intricate, alien head, its weird robotic impressions and vibrant neon shapes. The thing was opulent in its absurdity.

One of the men grabbed the relic and slowly lifted the helmet from the thing’s crouching, withered body to reveal a tiny grinning skull that watched the men with a look of hysterical hatred. Wherever the men moved, its eyes followed them, and they began to hear a kind of quiet synthesized laughing in the back of their minds. A noisy robotic howling that got louder and louder in a distorted wave of static screams that drove the men mad. It was the howling static signal that brought them here!! Desperate to stifle the noise, they frantically put the helmet back on the thing and set it down! Relief! The sickening noise stopped, but the men now noticed the latches on the outside of their space helmets coming undone..Some invisible hand was now removing THEIR helmets! Once again the immense alien laughter came, and the men’s own screams were absorbed into the cacophony of it, as they tried to run away. They barely got 5 feet away when their visors are unceremoniously yanked away exposing their maniacal human heads to Jupiter’s gravity.

The relic had now added the men’s voices to its own. Absorbed into its tiny, terrible body.

All was quiet ancient death again, as the floating dust of the tomb fell like silent snow upon the gore of the space men’s imploded skulls”. 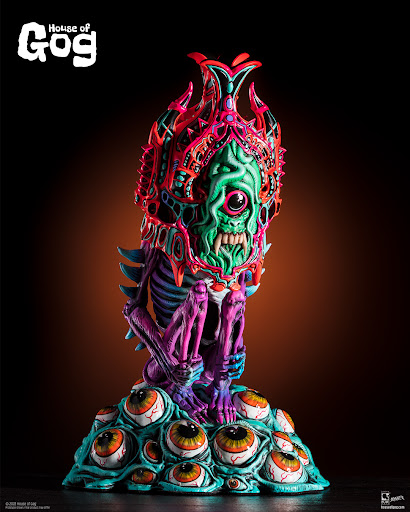 Here is what this collectible features one Relic of a Jupiter tomb statuette, one removable & displayable “two-sided” helmet: synthetic god & biomorphic deity. A  two-sided removable helmet, where the helmet can be flipped to present a different design on each side. The statuette also comes with a art print (9.5 x 7 inches) hand-signed by Skinner. There is of course a Certificate of authenticity signed by House of Gog founders. The statuette comes packaged in a soft touch collector art box

This all comes at a cost of $325 USD with flexible payment plans available. Worldwide shipping is also available on this item also. Purchase something for a friend or family that is truly out of this world this Holiday Season.

Photos of statuette by: Rej Harel