Produced by horror filmmaker Jon Keeyes (AMERICAN NIGHTMARE, NIGHTMARE BOX), ALTERSCAPE screens at 9 p.m. this evening at the Village East Cinema (189 2nd Avenue), with Levin, Ironside and other cast in attendance; see details here. The movie also stars Charles Baker (BREAKING BAD’s Skinny Pete) as Sam Miller, a young man who loses his mother and brother, falls into a deep depression and unsuccessfully attempts suicide. He agrees to become a test subject for scientists experimenting with manipulating human emotions, which leads him and the audience to experience altered realities. Levin tells us, “This story is very personal; it’s one I’ve wanted to tell for quite some time, that deals with emotions. That’s something that people shy away from in modern society; we try to suppress emotions, and treat people who are sensitive and emotional as weak, as outcasts. So I wanted to flip that around and emphasize the importance of emotions, and that they can either destroy us or save us. We really need to do that, as opposed to suppressing ourselves, which is happening in a lot of developed countries in the 21st century. 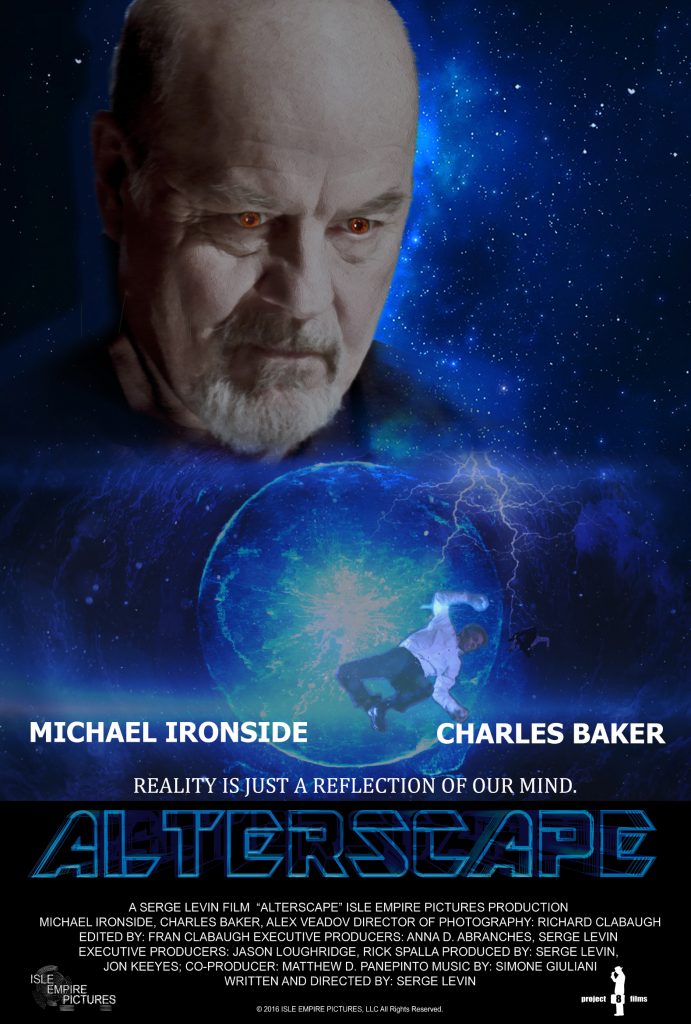 “It’s definitely a thriller,” he continues, “and there are a lot of horror elements and dramatic moments as well. But it also carries a message that deals with who we are as human beings, and how we are able or not able to realize the depth and richness of our emotional world, and how much it can help us become much more than what we are. There’s the old saying, ‘I think, therefore I am,’ and I flipped it; I adapted it to ‘I feel, therefore I am.’ That’s my logline for the film.”

Although he acknowledges SCANNERS along with TOTAL RECALL as inspirations for ALTERSCAPE, he says it’s just coincidence that the actor who played villains in both is also a baddie here. “It just happened that Michael Ironside came on to portray Dr. Loro,” he notes. “There were two actors I was picturing while writing the script, and they were Charles Baker and Alex Veadov [who plays one of the scientists]. That was not the case with Michael, but it was a very lucky blessing to have him as part of this production.”

Ironside himself recalls bringing the Cronenberg comparison to Levin: “I said, ‘How much of a ripoff of SCANNERS are you actually going to admit to here?’ And he said, ‘No, no, no, no, no’…and then he smiled. As far as comparisons between my characters in the two films, there aren’t really any. In SCANNERS, Lawrence Dane played the liaison between the corporate society and the medical experimentation that Dr. Ruth was doing on the scanners, and I’m probably playing that role here; I’m the industrial liaison. There’s all this wonderful experimentation that will help and heal the masses going on in the laboratory, and I want to take it and sell it and make a profit, to the weapons industry—black ops kind of people.”

The actor also reveals one simple reason he decided to take part in ALTERSCAPE, which shot in various locations around New York City. “My daughter wanted to come to Manhattan for her 16th birthday and go to a Broadway show,” he explains. “I was offered this movie at the same time I was offered something else, and I told her, ‘All right, I’ll do this movie, and we’ll go to New York together.’ It’s not that the script was inferior or anything like that, it was just a toss-up between this project and another, and I’m glad I came onto this one. It was a great group of people, a small indie crew working their asses off.

“It’s great to watch a first-time director light up as things happen on set,” Ironside continues, “and as he goes from the process of writing, where you’re all alone, to getting on the set with the people who are going to enact it and create it, and there’s a give-and-take between what you want to happen and what actually does happen. Watching Serge deal with that hard learning curve, and also his absolute joy of seeing things come to life and get better, was terrific to watch.”

Ironside also gets positive vibes from the themes running beneath ALTERSCAPE’s genre elements. “The wonderful thing hidden in this film is the question of humanitarian behavior in people,” he says. “It asks, is it natural for people to be humanitarians, or is it always going to be, stand on the shoulders of somebody else and survive? I think it’s very well-handled.”