Nightstream ’20 Review: “HONEYDEW” is sweet music for fans of the surreal

HONEYDEW begins with an off-kilter montage of Southern Gothic visuals, purposefully bewildering, setting the tone for what seems like something we’ve all seen before. Sam (Sawyer Spielberg) and Riley (Malin Barr) are a young couple taking a weekend camping trip in backwoods farm country, where Riley is studying the local agriculture. Caught by an annoyed farmer upon whose property they have accidentally set up camp, they attempt to flee but discover their car battery has died in the night. After knocking on the nearby door of an old woman named Karen (Barbara Kingsley), things begin to escalate.

For many, another TEXAS CHAINSAW variant may not be the first thing on their must-see list, but thankfully, HONEYDEW (which world-premiered earlier this month as part of the Nightstream film festival) diverges from the typical miming of the Sawyer Family setup, creating a hallucinatory vacation to hell for the characters on a far more experimental road. 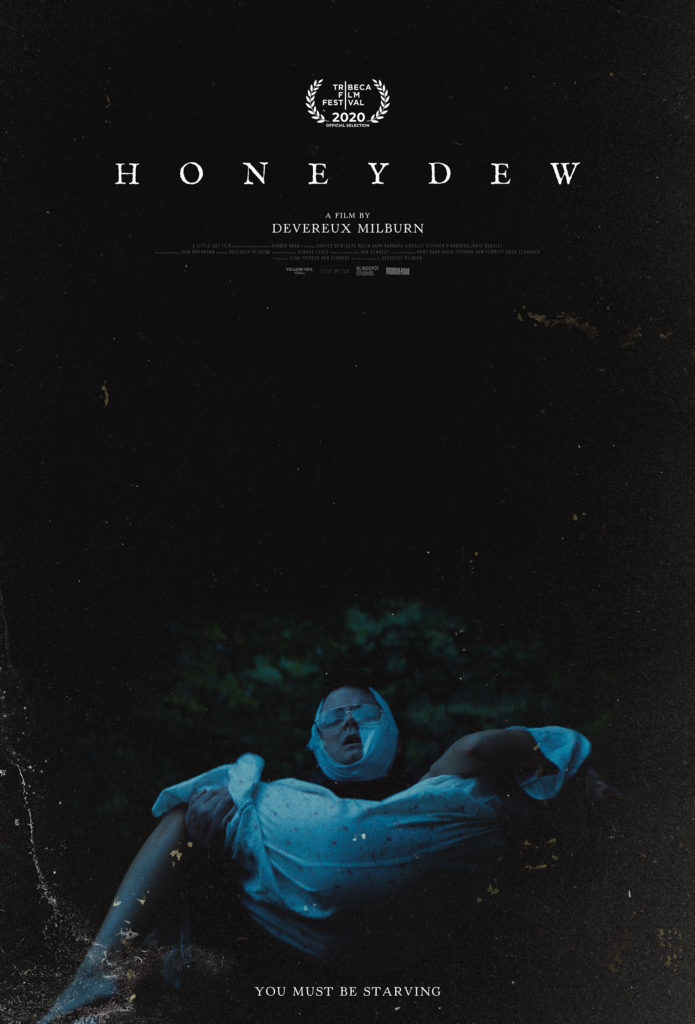 And speaking of Sawyers, lead actor Sawyer Spielberg will likely have his name eternally preceded by “Steven Spielberg’s son” due to his father’s foothold in cinema history, which is too bad, because he can definitely stand on his own. His performance in HONEYDEW is naturalistic and fun, and he and Barr give the viewer the sense of seeing a couple at the end of the rope in their relationship. Occasional flirtatious moments are undercut by jabs and annoyance. Their overnight journey from a couple’s retreat breaking down into confusion, headbutting and their potential demise plays out like a crumbling marriage on fast-forward.

But the true star of HONEYDEW is newcomer Devereux Milburn’s direction. With editing and visuals seemingly inspired by experimental art, he crafts HONEYDEW into a fever dream that twists your perception of time. The movie is as disorienting to the audience as it is for the characters, with as much focus put on cultivating that eerie uncertainty of where or when we are as every other element. From scene to scene, HONEYDEW transforms until it seems like an entirely different movie, without any clear point where the shift took effect. A plot twist will trigger a clouded memory of a person or place, and you suddenly remember that it was buried in a shot from the first act.

The movie is a trip, and its surreality is as beautiful as it is strange: landscapes like paintings, colors bursting from the screen. There’s something ominous in the unending acres of wheat fields, and the inside of Karen’s farmhouse is their claustrophobic complement, with antique yet out-of-place TVs blaring cartoons brushed with static. I cannot wait to see what Milburn does next.

Before watching HONEYDEW, I had been tipped off to look out for a bizarre cameo, but as the movie went on, no one I recognized had appeared. I began to fear I’d missed it–maybe the cameo wasn’t someone on my radar. Then it happened, and…wow, was it better than I could have imagined. I refuse to say anything else in hopes that you, dear reader, will get to experience it as I did. Care has clearly been put into keeping this a secret, and I must thank everyone involved with the movie for doing so.