Nightmares Film Festival ’20 Review: Brace yourself for “WHAT HAPPENS NEXT WILL SCARE YOU”

In 2013, Chris LaMartina, Jimmy George and their collaborators traveled around their home city of Baltimore planting VHS cassettes at bus stops, thrift shops and anywhere else they thought someone might stumble across them. The tapes contained what appeared to be a local news’ Halloween special gone wrong, recorded with a VCR. It was actually a found-footage-style horror movie titled THE WNUF HALLOWEEN SPECIAL, and within a few years, it was a choice Halloween flick for savvy horror fans willing to hunt for underground brilliance. The next year, the team made CALL GIRL OF CTHULU, a Lovecraft-inspired horror/comedy with one of the best titles of all time. Finally, six years later, writer/director LaMartina and writer/producer George have returned to premiere their new, years-in-the-making anthology WHAT HAPPENS NEXT WILL SCARE YOU in the 2020 Masquerade virtual edition of the Nightmares Film Festival.

The movie is set in the offices of Click Clique, a clickbait “news” blog akin to BuzzFeed. A few weeks before Halloween, company head June (Kalima Young) keeps the staff late to work on a list of the 13 scariest videos on-line for the site. Eugene the wimp (Johnny Marra), Vanessa the hipster (Kathy Carson), Lester the music critic (Troy Jennings) and Rachel the mom (Melissa LaMartina) take turns playing everything from paranormal videos to dating tapes gone wrong, and then debating their scariness in a board-room pitch meeting.​ 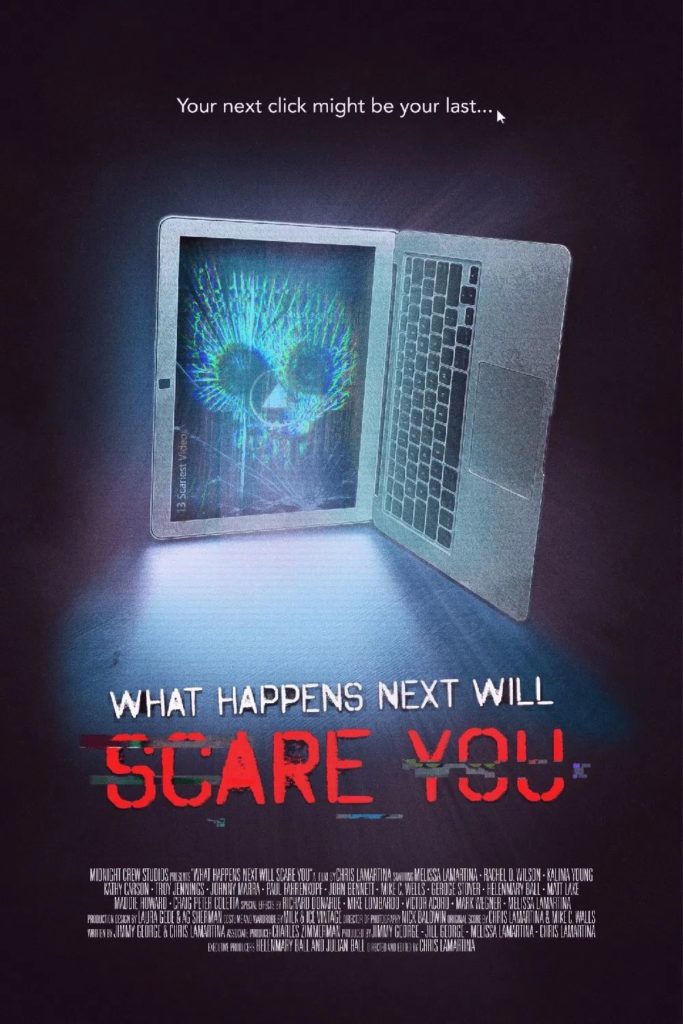 Truthfully, I don’t want to tell you another thing about what happens in WHAT HAPPENS NEXT. The discovery is so much fun, and every time a video ended, I was so excited to see what weird haunted tape the staff would dig up next. There is an insane level of creativity on display in each and every segment. Dash-cam clips, old shows on VHS, how-to videos–LaMartina and company tackle them all, and impressively nail the tone of each type of video oddity they attempt.

Equal care is given to the wraparound, which does not deserve to be diminished with that term. I’m not much of an anthology fan, finding most such movies disjointed and unbalanced; and though WHAT HAPPENS NEXT is billed as such, it does not resemble what one expects from the term, avoiding all the typical pitfalls of piecing together a movie from smaller movies and delivering an actual coherent story. The characters are enjoyable and campy, and even if the office footage lacks the tricks and effects of the clips, it is just as much fun spending time with them and watching their story morph under the influence of the scary content they’re analyzing. Beyond all that, WNUF fans will be thrilled to see Paul Fahrenkopf, who played the previous movie’s reporter Frank Stewart, back as a janitor. Even Dr. Louis and Claire Berger, the Warren-inspired paranormal researchers, return for cameos.

With its short and sweet runtime, puppets, clowns, over-the-top gore and a few sick rock ’n’ roll tracks from Baltimore band Queen Wolf, WHAT HAPPENS NEXT WILL SCARE YOU is a perfect Halloween party movie. Do not leave this out of your October movie viewing–and keep an eye out for the clever RETURN OF THE LIVING DEAD homage!

Head over to Nightmare Fest’s official website for the rest of the Masquerade program, which runs through October 25, and for ticket and badge sales.