The new disc division debuts with a pair of ultraviolent flicks this summer.

Wild Eye Releasing has announced its new Visual Vengeance banner, devoted to issuing overlooked grassroots fright fare from the 1980s through the 2000s on hi-def discs. A number of previously lost titles will be resurrected for the label, and represented filmmakers will include SOV favorites such as Todd Sheets, Bret McCormick, Mark Polonia, Brad Sykes, Kevin Lindenmuth and Donald Farmer. The Blu-rays will come with copious bonus features, in deluxe limited editions with limited-edition slipcases. First up, coming in July, are Shinichi Fukazawa’s BLOODY MUSCLE BODY BUILDER IN HELL (1995), alternatively known as “the Japanese EVIL DEAD,” shot on Super-8 and seeing its first-ever North American release, and Matt Jaissle’s THE NECRO FILES (1997, pictured above). The synopsis for the former: “Trapped inside a haunted house, a bodybuilder must survive a bloodsoaked night of insanity to save himself and his friends from a demonic ghost that is hell-bent on revenge.” Special features include: 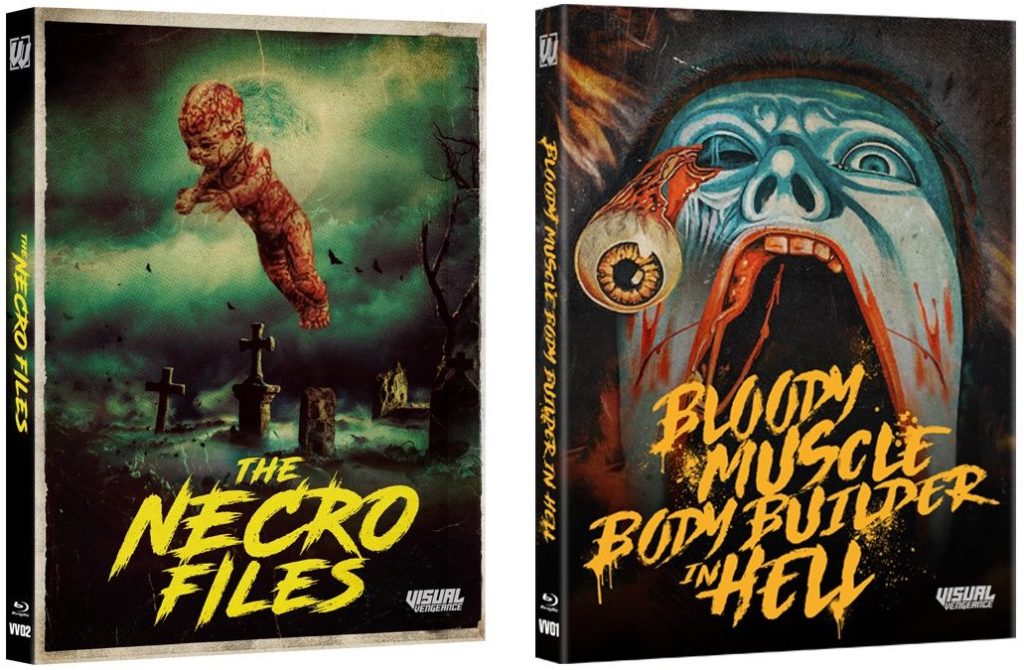 The synopsis for THE NECRO FILES: “A serial killer rises from the grave as a flesheating zombie maniac! Two Seattle cops, a satanic cult and a flying demon baby try to stop the lust-crazed ghoul before he can kill again. THE NECRO FILES is stacked with intense scenes of gore and sadism, and boasts some of the most WTF moments in the history of shot on video cinema.” The bonus features include: