An acclaimed new horror film and a couple of cult classics from the past are part of the Blu-ray announcements today. 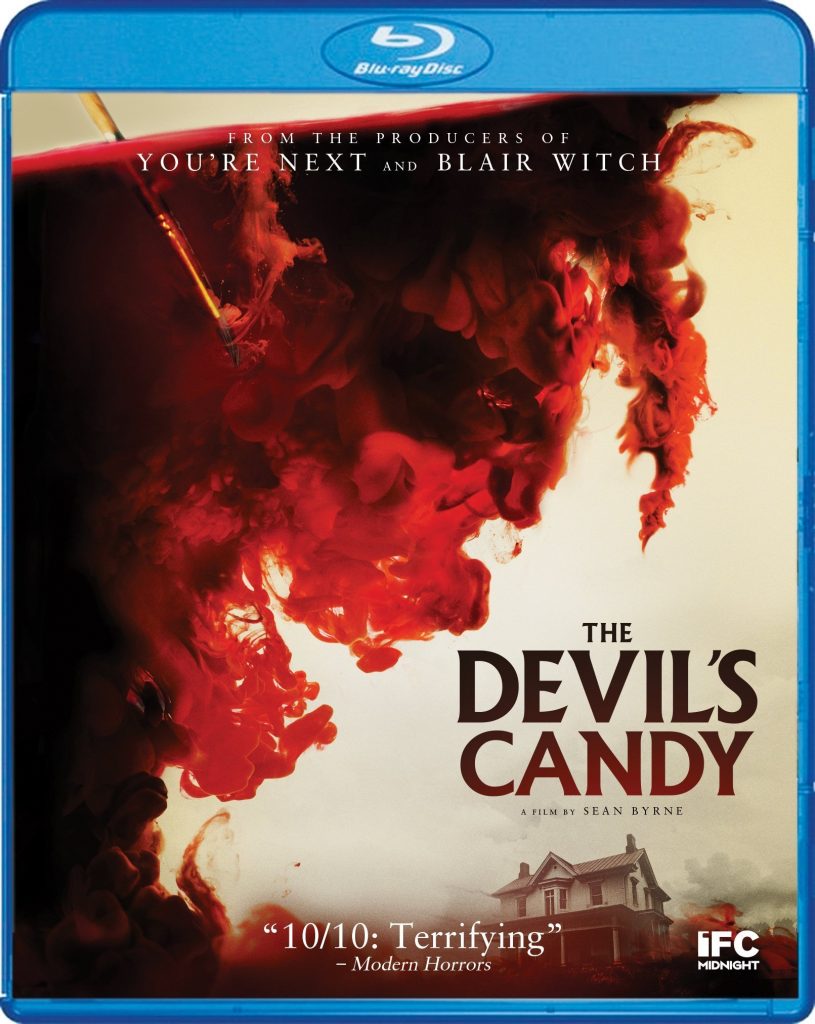 • Shout! Factory, in conjunction with IFC Midnight, will release writer/director Sean Byrne’s THE DEVIL’S CANDY (pictured above) on the Scream Factory label September 26. The filmmaker’s follow-up to his popular THE LOVED ONES stars Ethan Embry (CHEAP THRILLS), Shiri Appleby, Kiara Glasco and Pruitt Taylor Vince (THE WALKING DEAD). The synopsis: “Diehard metalhead and struggling artist Jesse [Embry] moves with his wife [Appleby] and daughter [Glasco] to a rural Texas town, unaware that the house they got for an unbelievable deal comes with a grisly history. Their dream home turns into a nightmare as disturbing demonic occurrences culminate with the appearance of Ray [Vince], the home’s former resident—who’s destined to do the devil’s bidding.”

The movie will be presented in 2.40:1 widescreen, accompanied by the following bonus features:

Retail price is $22.97, and you can pre-order the Blu-ray at Shout! Factory’s website for $19.97. See our interviews with Byrne and Embry about DEVIL’S CANDY. 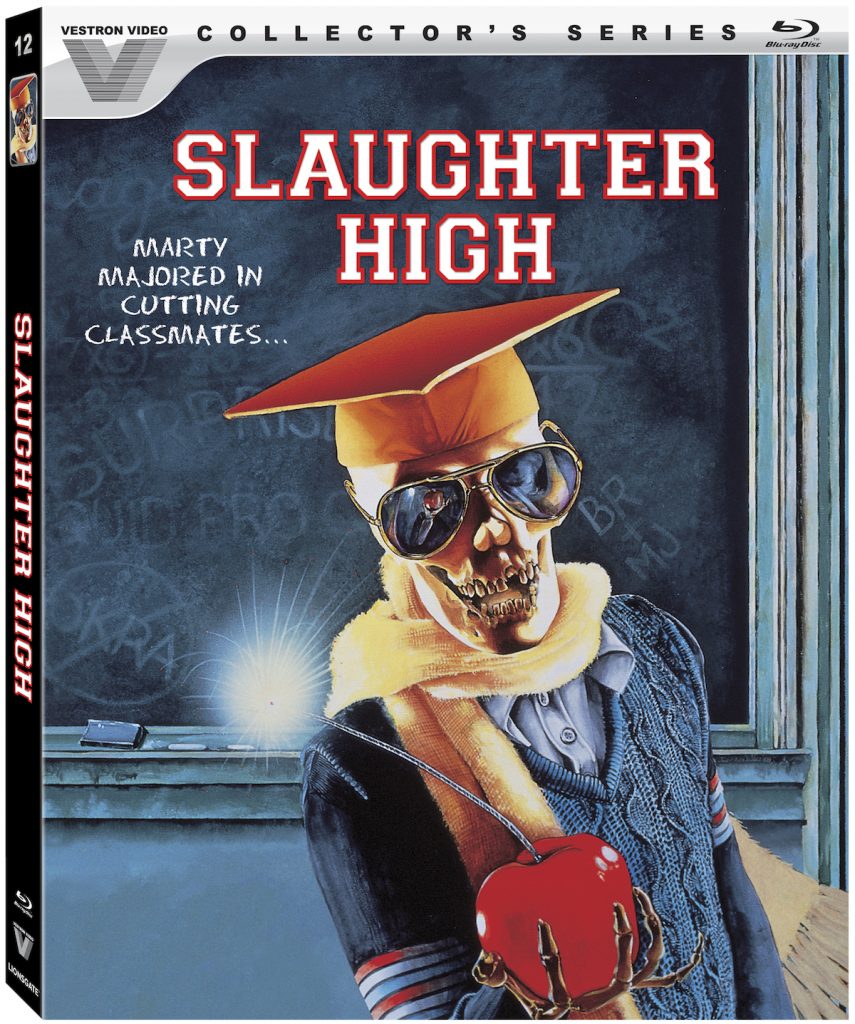 • As part of its ongoing Vestron Video Collectors Series, Lionsgate Home Entertainment will release the 1987 British slasher opus SLAUGHTER HIGH on Blu-ray October 31. Filmed as APRIL FOOLS’ DAY and written and directed by George Dugdale, Mark Ezra and Peter Litten, it stars Caroline Munro (THE GOLDEN VOYAGE OF SINBAD, MANIAC). The synopsis: “In high school, Marty was the kid all the students teased, taunted, and tortured mercilessly. One day, things went too far—one of their jokes backfired, disfiguring Marty for life. Now, five years later, Marty has arranged a special reunion for all his high school ‘friends.’ The prom queen, the jock, the class clown, the rebel, and a few select others have been invited…and it’s going to be a gala of gore!” 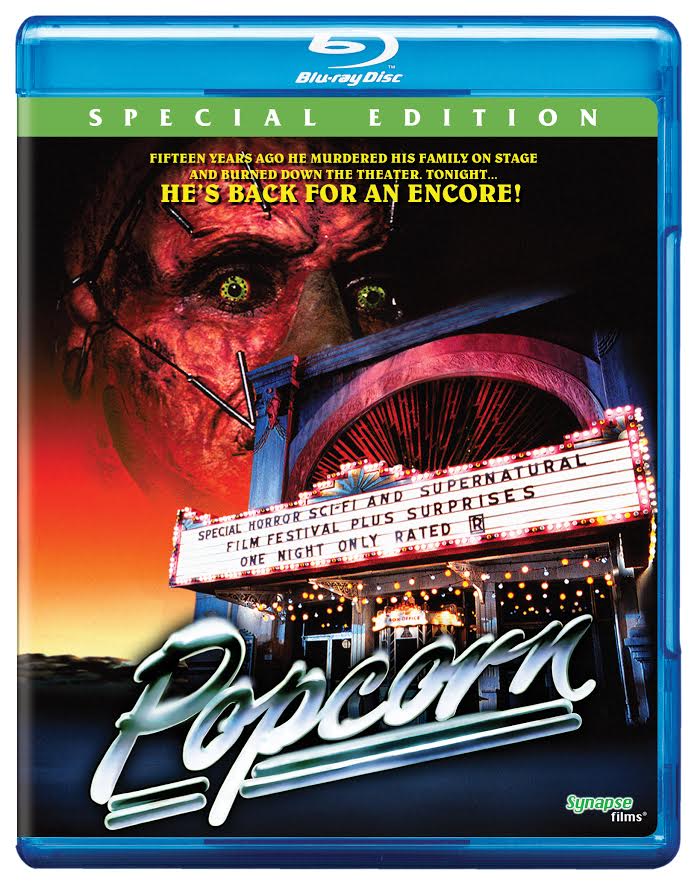 • After releasing the 1991 movies-within-the-movie/slasher flick POPCORN in a limited-edition Steelbook earlier this year, Synapse Films is now set to issue it on general-release Blu-ray and DVD October 3. Directed by Mark Herrier, pseudonymously written by Alan Ormsby (DERANGED, CAT PEOPLE) and co-produced by an uncredited Bob Clark, it stars Jill Schoelen (THE STEPFATHER), Dee Wallace (THE HOWLING), Tony Roberts (AMITYVILLE 3-D), Ray Walston (THE STAND), Malcolm Danare (CHRISTINE) and Kelly Jo Minter (A NIGHTMARE ON ELM STREET 5). The discs will feature a new 2K scan of the archival 35mm interpositive, presented in 1.78:1 (1080p on the Blu-ray), with a new 7.1 Surround Sound mix on the Blu-ray and 5.1 Surround mix on the DVD, packaged with reversible cover art. The supplements are: