Movie Reviews: “COLOR OUT OF SPACE” and “THE TURNING” update famous horror lit

It’s just a scary coincidence that two horror films contemporizing works of classic literature—H.P. Lovecraft’s “The Colour Out of Space” and Henry James’ THE TURN OF THE SCREW—are both opening today. (And it’s an even greater coincidence that this week saw Blue Underground’s Blu-ray release of Lucio Fulci’s THE HOUSE BY THE CEMETERY, which draws influence from both Lovecraft and James; full disclosure, I wrote the liner notes.) COLOR OUT OF SPACE is the more successful of the two, spicing Lovecraft’s tale with extra doses of director Richard Stanley’s otherworldly oddness, while THE TURNING gets some decent Gothic creep on before completely falling apart in an ending that tries to be way too tricky for its own good.

Stanley’s first feature in the three decades since DUST DEVIL got butchered by the good people at Miramax, COLOR OUT OF SPACE (which he wrote with Scarlett Amaris) marks him as one of the horror genre’s most intriguing stylists, who never makes the same movie twice. After the clanging, claustrophobic cyberpunk of HARDWARE and DUST DEVIL’s spare, eerie wide open desert spaces, he successfully takes on the challenge of translating Lovecraft’s prose, with its unknowable, indescribable terrors, to the more concrete medium of film. Right away, he brings his own interests in mysticism to the table, or more accurately, a lakeside where teenage Livinia Gardner (Madeleine Arthur) is conducting a Wiccan ritual, attempting to help her mother Theresa (Joely Richardson) recover from a recent battle with cancer. The two live on a nearby farm with dad Nathan (Nicolas Cage), preteen son Jack (Julian Hilliard) and teen son Benny (Brendan Meyer), a toker who gets his supply from old hippie Ezra, played by who else but Tommy Chong. (Those familiar with Stanley’s docs like THE OTHERWORLD may be amused to note the resemblance of Ezra’s forest shack interior to one of the director’s haunts in the Pyrenees.)

Their isolated existence is shattered by the arrival of a meteor that crashes into their property, emitting a strange light (Lovecraft’s “Colour” visualized as an unsettling magenta). Although the space rock soon disappears, its deleterious effects get into the water supply, and soon the Gardners’ dogs and alpacas are behaving strangely, followed by some of the Gardners themselves. Of course, strange onscreen behavior is nothing new for Cage, and his casting here has the effect of making Nathan’s rants and other craziness seem not so much startling as inevitable. Otherwise, though, Stanley effectively calibrates the madness and monstrousness taking over the farm, incorporating some very unsettling makeup and prosthetics grotesqueries by Dan Martin and arrestingly bizarre digital effects overseen by Joaquín Gutiérrez. Pretty soon, reality itself becomes distorted, and the director and his team effectively visualize Lovecraft’s sense of cosmic disruption.

It’s no surprise that Livinia, the character most in tune with the paranormal, becomes the hero of Stanley’s scenario, joined by a grad student investigating the local water supply, with the referential name Ward Phillips (Elliot Knight). (The director discusses the significance of this character and more about COLOR here.) COLOR OUT OF SPACE reestablishes at last Stanley’s bona fides as a distinctive talent in the genre, and with another Lovecraft film, THE DUNWICH HORROR, next on his plate, it’ll be interesting to see if, or more likely how, he changes up his approach once again.

THE TURNING, meanwhile, was directed by Floria Sigismondi, a veteran of numerous popular music videos whose previous feature was the rock ’n’ roll biopic THE RUNAWAYS. So it’s no surprise that she sets her new movie’s timeframe, specifically 1994, with a TV news broadcast about Kurt Cobain’s death. Holding to the basics of TURN OF THE SCREW while taking liberties with the details, THE TURNING (scripted by the CONJURING duo Carey W. and Chad Hayes) is set at an imposing Maine estate where Kate (Mackenzie Davis) takes a job as private tutor to a young girl named Flora. Orphaned by a car accident that she herself witnessed, Flora is nonetheless a spunky, inquisitive child (played with most appealing precocity by Brooklynn Prince of THE FLORIDA PROJECT), and she and Kate bond quickly. Not so friendly are Kate’s interactions with chilly, elderly housekeeper Mrs. Grose (Barbara Marten), and tensions in the house rise when Flora’s brother Miles (STRANGER THINGS’ Finn Wolfhard) returns to the manor after being expelled from school. He has attitude issues and is a bad influence on Flora, and their increasing misconduct seems connected to a ghostly presence that Kate begins to sense around the house. 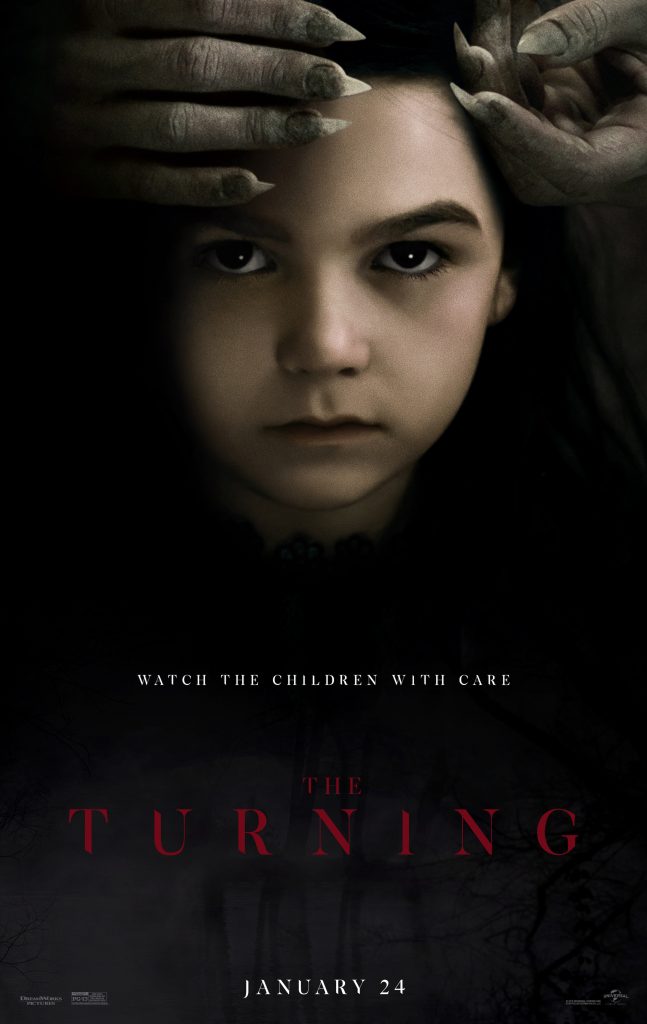 This update of James’ text changes the emphasis from simple possession to the wages of abusive behavior, as Kate discovers horrible secrets about what a now-dead riding instructor named Quint got up to. THE TURNING also introduces a theme of inherited madness, giving Kate a mentally addled mother (Richardson again!) residing in a nursing home, and suggesting that the haunting and the kids’ torment is only exacerbating Kate’s precarious mental state. Davis, sporting a bleached-blonde-bangs hairstyle that seems designed to make people forget her harshly cropped ’do in TERMINATOR: DARK FATE, conveys well her early concern for her charges and her slide into hysteria, and Wolfhard makes Miles a convincingly sullen and rotten kid that you just wanna smack upside the head. Photographed by David Ungaro with a naturalism that draws us quickly into the world of the estate, THE TURNING builds an effective mood of oppression and lurking danger for a while.

Less persuasive are the jump scares Sigismondi too often employs, and the longer the movie goes on, it seems to be marking time until it gets to its payoff. When it does, the whole thing falls apart; just when it seems to be reaching a point of eerie resolution, suddenly the filmmakers pull a fast one, or a couple of fast ones, attempting to recast everything we’ve seen in a new light but instead miring the audience in frustrating confusion. It’s the least satisfying wrapup to a January-release supernatural thriller since the notorious THE DEVIL INSIDE back in 2012, and may perhaps be a byproduct of THE TURNING’s convoluted genesis. It was initiated in 2016, went through a directorial switch (from 28 WEEKS LATER’s Juan Carlos Fresnadillo) and a number of rewrites and had its original release date bumped by nearly a year. Most tellingly, the name of Steven Spielberg, a champion of the project from the start, appears nowhere in the credits. THE TURNING ends up relegated to nice-try status, leaving Jack Clayton’s THE INNOCENTS uncontested as the superior adaptation of James’ novella.