European vampires are often characterized as seductive richies with great fashion senses, but not Vidar Hårr, the title character of Norway’s contribution to the lore. He and his movie seem more influenced by the politically incorrect Dutch NEW KIDS comedies (and if you haven’t seen or heard of those, do your best to seek them out).

Vidar is a scruffy rural sad sack played by Thomas Aske Berg, who also wrote and directed the movie (now streaming as a Dread Central Presents title; find it here) with Fredrik Waldeland. We first meet him via a news broadcast in which an interviewer questions him about strange supernatural events on his farm, but ignores the conspicuous bandage on his neck. A flashback to Vidar’s childhood (where he’s played by Ruben Jonassen, who doesn’t look a thing like Berg, but never mind) establishes that he’s never had luck with girls, and at 33, he’s still living with his lazy, demanding mother (Marit Sanden) and literally praying to Jesus to deliver him from his life of work and drudgery and allow him to “drink, fuck and fight.” 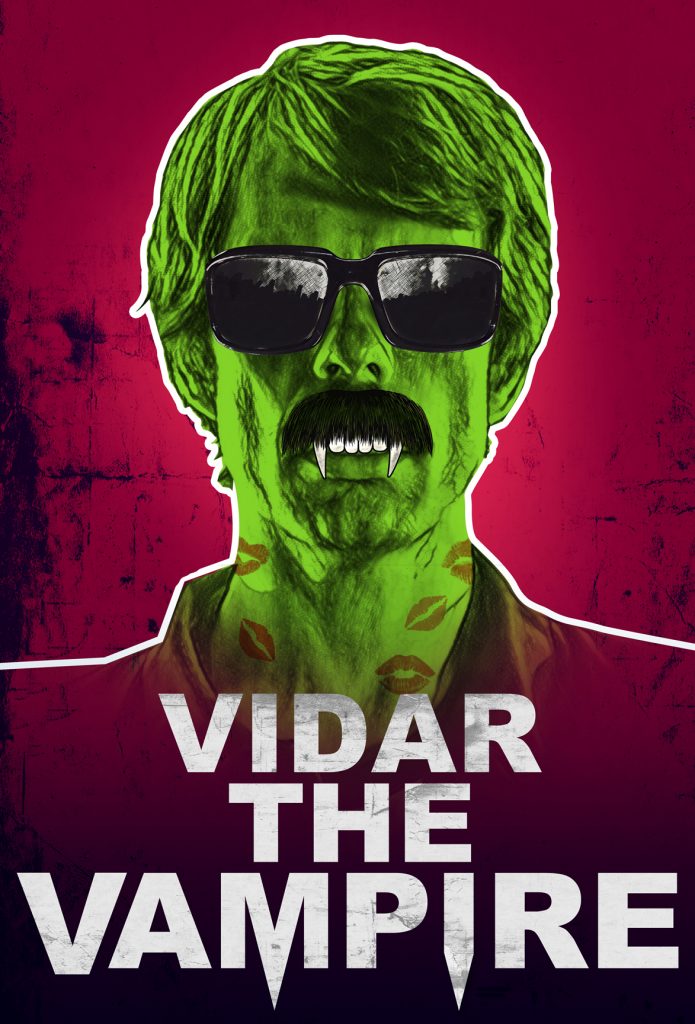 Wouldn’t you know it, a demonic Jesus (Brigt Skrettingland) turns up to answer his pleas in a hallucinatory sequence that’s one of VIDAR THE VAMPIRE’s blasphemous highlights. Accompanied by eye-catching visual effects and sporting uneven fangs, he compels Vidar to get on his knees and accept his body…or at least one part of it. The experience apparently leaves Vidar dead, but he winds up literally rising from his coffin during his funeral (a funny, well-staged scene that shows how a congregation might really react if they witnessed a miraculous resurrection), and he and Jesus head out to the city of Stavanger so that Vidar can use his new undead status to live the life of debauchery he’s always dreamed of. Trouble is, in a variation on the Dudley Moore/Peter Cook classic BEDAZZLED, Jesus is always upstaging him in front of the women they meet; turning water into wine, it turns out, is an irresistible bar trick.

Clearly, nothing is sacred to Berg and Waldeland, and VIDAR THE VAMPIRE is nasty, naughty fun for a while as they stick it to religion and other institutions in obscene and gruesome but frequently clever ways. Part of the reason it works is that they don’t push the outrageousness in their filmmaking choices, adopting a naturalistic style that allows the transgressions to speak for themselves, with frequent, well-timed cuts to Vidar relating his woes to a psychiatrist (played by Danish actor/indie horror filmmaker Kim Sønderholm). The duo and their crew, most notably cinematogapher/visual effects creator John Iver Berg, also give the movie a very slick look belying its very low budget—which they had to pull together themselves, since Norwegian government funding boards aren’t especially genre-friendly.

The humor sours somewhat in the second half as Vidar continues to have bad luck with the females, whom the movie thus presents as either whores or bitches. The low point is a lengthy, gross and uncomfortable sequence involving a woman (Linda Tveiten) whom the end credits unkindly bill as “Drunk cunt.” The movie never quite recovers, though fortunately, Vidar does and has an inevitable awakening to the error of his ways that gets his story back on track. VIDAR THE VAMPIRE isn’t for every taste, and if some of its transgressions are more clever than others, it ultimately amuses more than it offends.