Unlike so many other teams-in-crisis horror/action films, UNDERWATER wastes no time plunging its ensemble into the thick of danger. No sooner have we met Norah (Kristen Stewart), a mechanical engineer on a mining station in the Mariana Trench—the deepest point in the ocean—than the facility is hit by an apparent earthquake that sends water blasting through the walls and Norah running for her life. There are none of the usual introductory passages for us to get to know the characters before they’re threatened; it’s a stripped-down approach to a survival thriller-chiller, and in this case, that’s not such a bad thing.

The signs have been pointing against UNDERWATER thus far: It’s being released nearly three years after it was filmed, in an early-January slot that has traditionally (but, admittedly, not recently) been reserved for expected non-performers, with a generic title and marketing suggesting that the movie was going to party like it’s 1989—the year DEEPSTAR SIX, LEVIATHAN and LORDS OF THE DEEP underwhelmed as submerged variations on the ALIEN/ALIENS theme (getting into theaters ahead of James Cameron’s THE ABYSS). And while it’s true that UNDERWATER doesn’t do much that’s new, it must be said that it does it quite well, and while surprise may not be at a premium, suspense is generated at a pretty consistent level. 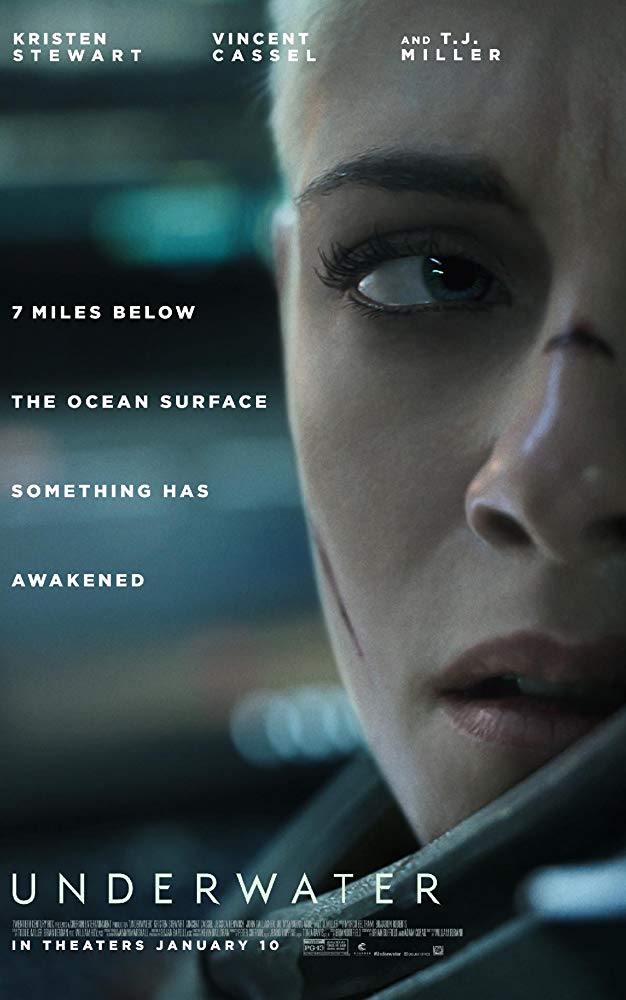 Dan O’Bannon once said that when he wrote the early drafts of ALIEN, he left the characters as blank slates with personalities to be filled in by the cast. That came to mind while I was watching UNDERWATER; while that likely wasn’t the ambition behind this script, the actors do a lot to engage us in roles that are lightly sketched in, defined mostly by their reactions to their life-and-death situation. Norah survives the first indoor deluge with Rodrigo (Mamoudou Athie), and they eventually join a handful of other survivors: Paul (T.J. Miller), Emily (Jessica Henwick) and Smith (John Gallagher Jr.), under the protective watch of Captain Lucien, played by Vincent Cassel. (Casting Cassel, the French actor not usually known for voice-of-authority roles but who here proves to have a knack for it, proves to be a smart decision.) Now trapped more than six miles below the surface, with all the escape pods already jettisoned, they have no choice but to don deep-sea diving suits and make their way through more of the ruined station and across the ocean floor to get to another base that may offer salvation. That’s nerve-wracking enough, but it soon becomes clear that something alive and predatory—likely released by drilling too deep—is waiting for them out there.

Brian Duffield and Adam Cozad’s script is essentially a series of threats and obstacles encountered on the way to that point of deliverance, and they’re varied enough to keep UNDERWATER from bogging down. Director William Eubank, jumping into big-league filmmaking following his 2014 sci-fi indie THE SIGNAL, gets the claustrophobia going early on, often keeping his camera close on the imperiled individuals and adopting their points of view, as we wonder what perils might emerge behind or before them. He gets us feeling like we’re right alongside them, and that’s key to the effective pitch of tension he builds and sustains throughout a great deal of UNDERWATER. The dense and oppressive cinematography by seasoned DP Bojan Bazelli (who’s shot PUMPKINHEAD, THE RING and Abel Ferrara flicks among many others) contributes plenty of visual unease, and there’s a physical plausibility to the entire production that allows us to believe in the group’s plight.

Similarly, while the design of the sea creatures—starting with a physically created 2-foot-long nasty and continuing with digitally generated beasts—isn’t anything we haven’t seen in past films of this type, they’re well-wrought enough that their danger feels real. That’s the basic achievement of UNDERWATER: overcoming familiarity through solid craftsmanship and filming technique. Yes, there’s an unfortunate capitulation to outdated formula in terms of who dies and when, and other recognizable beats: Not only is Norah reduced to her underwear toward the end à la Ripley in ALIEN, she’s caught with her boots off during the first explosion and has to run through the early action barefoot like DIE HARD’s John McClane. We want to stick with her, though, thanks to the sympathetic gutsiness Stewart brings to the part, and de rigueur wisecracker Paul is a likable and amusing presence as played by Miller. They and their co-stars help UNDERWATER float higher in the sea of creatures-picking-’em-off fright films than you might expect.