“Boys will be…you know,” says a campus security guard in the new BLACK CHRISTMAS, attempting to rationalize the bad behavior of some frat guys. We do know, and writer/director Sophia Takal and co-scripter April Wolfe are among the many women who have heard that excuse way too many times, motivating them to pitch this reboot of Bob Clark’s 1974 slasher classic as a horror film for the #MeToo era.

This is not entirely as big a turn as it might seem; Clark’s film features a heroine (Olivia Hussey) struggling with the decision to have an abortion—a subject not often cinematically dealt with in early-’70s fare—while dealing with a boyfriend (Keir Dullea) whose behavior could certainly fall under the modern definition of “toxic.” Then there’s her foul-mouthed sorority sister (Margot Kidder) who talks back to the deadly obscene phone caller. Still, the feminist issues are side subjects in the original CHRISTMAS, and they’re front and center in Takal’s film, which is inspired as much by headlines from the last few years as it is by its predecessor from 45 years ago. 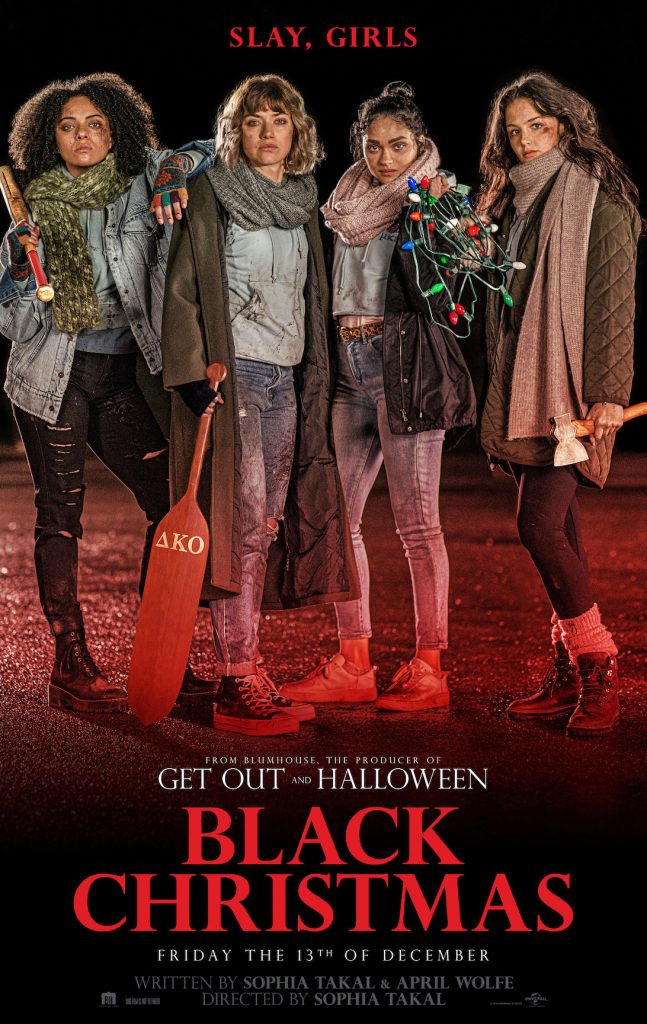 As such, it’s a more successful update than Dimension Films’ dreadful 2006 reboot, even if it wears its messaging on its sleeve to the point where it sometimes overwhelms the horror—and then loses the message when it goes full-bore genre at the end. As before, the setting is a wintry university, here the fictitious Hawthorne College, in the days just before winter break. Most of the girls of the Mu Kappa Epsilon sorority are heading home, though Lindsay (Lucy Currey) doesn’t make it thanks to a cloaked, hooded and masked figure making deadly use of an icicle. Prior to this attack, Lindsay becomes unnerved by a guy walking behind her down a nighttime street, a tense scene that succinctly sums up Takal’s themes and the ease with which a young woman’s sense of security can break down.

Lindsay’s MKE sister Riley (Imogen Poots, who previously dealt with deadly male aggression in GREEN ROOM) is still working through her own past violation, an assault during her freshman year by Brian (Ryan McIntyre), then the president of the Delta Kappa Omega fraternity. None of the right people believed her report of the attack back then, and she’s convinced by a few of the MKE girls to join them in a routine for a talent show that calls out Brian, who’s paying a visit to his old frat. He and his buddies aren’t pleased by the performance, and soon that disguised stalker is claiming more victims. Riley and the other sisters also start getting threatening text messages allegedly sent by Calvin Hawthorne, the college’s founder whose bust was recently removed from display thanks to his sexist and racist past. He may be dead, but his misogyny clearly lives on…

Poots’ sensitive and sympathetic performance, as Riley must not only work through her earlier trauma but face a very present danger, is key to what works about BLACK CHRISTMAS 2019. She personalizes the movie’s concerns and gives it some rooting interest, and carries it for most of the running time. Riley’s friend Kris (Aleyse Shannon) is a much more on-the-nose vehicle for the filmmakers’ messages; it was she who got Hawthorne’s effigy expunged, and now she’s behind a petition to eject Professor Gelson (Cary Elwes) for only including the literature of white males in his curriculum. There’s so much discussion of these talking points that the horror content sometimes feels secondary, particularly given that a few of the more gruesome punchlines have clearly been truncated in the interest of a PG-13 rating. Takal, who gives BLACK CHRISTMAS a chilly visual veneer in concert with cinematographer Mark Schwartzbard, builds decent suspense in several sequences, though the payoffs of a few of them can be seen coming—particularly for those viewers who recognize the direct influence of THE EXORCIST III on one of them.

Speaking of seeing things coming, the details of who’s plaguing and slaying the MKE girls have been pretty much spoiled by BLACK CHRISTMAS’ trailer (and are unsubtly foreshadowed in an early moment). What that preview doesn’t reveal—and won’t be given away here—is the driving force behind the murderous activity, which tips the story over into a different, more outlandish kind of horror that undercuts the focus on very real modern matters. After the film has utilized a genre framework to engage with weighty current events for the first hour or so, everything goes so over the top that it’s hard to take the last act seriously, and the movie loses its grip. Not to mention that these developments even suggest that violent, rapey dudes aren’t entirely responsible for their own actions, which could hardly have been the idea Takal wanted to convey. It’s paradoxical that had she eased up on the polemic in the first two-thirds and the explicit fright trappings of the last third, BLACK CHRISTMAS might have had more overall punch.