A sort of cross between Alexandre Aja’s CRAWL and Johannes Roberts’ 47 METERS DOWN: UNCAGED, Andrew Traucki’s BLACK WATER: ABYSS thankfully hews closer to the former than the latter when it comes to nature-amok entertainment value. And as such, it’s one of the least exaggerated entries in that particular subgenre.

ABYSS is the sequel to BLACK WATER, the well-received 2007 film Traucki wrote and directed with David Nerlich. That film wrung a lot of its tension from its use of real crocodile footage, cleverly and convincingly composited into shots of the actors. (Traucki used the same tricks in his superior 2011 shark thriller THE REEF.) ABYSS also utilizes that process, along with moments of well-deployed CGI, though this is that rare sequel that seems to show less of its featured creature than its predecessor did. Nature isn’t really amok in this movie, or in Traucki’s filmography in general; it’s just doing what large, hungry animals do when unfortunate humans enter their hunting grounds. 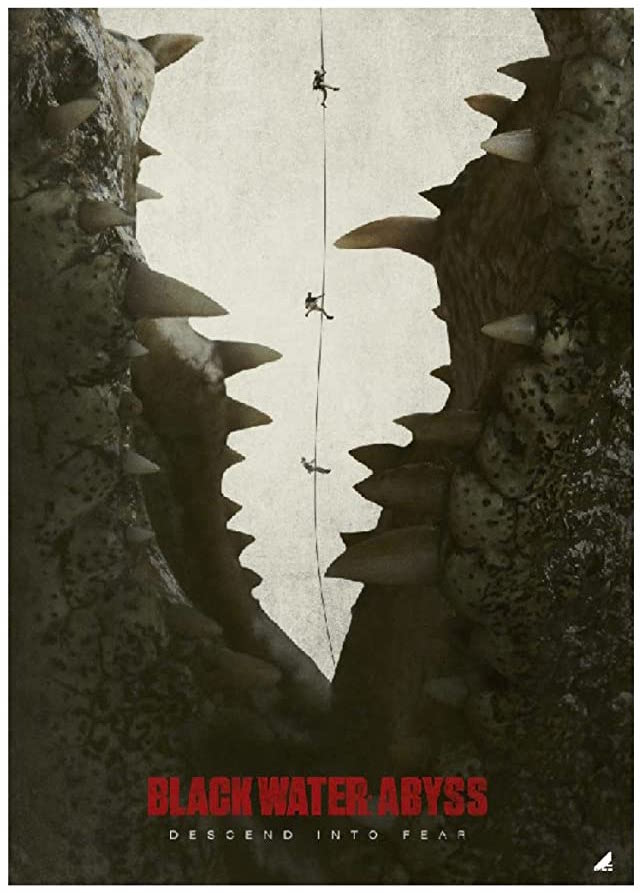 In this case, it’s two couples: Eric (Luke Mitchell) and Jen (Jessica McNamee), and Viktor (Benjamin Hoetjes) and Yolanda (Amali Golden), who traipse into an Australian forest to spelunk into a cave recently chanced upon by Eric’s friend Cash (Anthony J. Sharpe). Jen and Viktor, a travel writer more used to exploring bars in Bulgaria, aren’t really into the idea, but the aptly named Cash has convinced Eric that his discovery could become a lucrative business venture. What should be a warning sign is pretty much ignored: Cash found the cavern while searching for a Japanese couple who have gone missing in the area. Of course, they don’t know what we know, having seen a prologue in which those bushwalkers literally dropped into the hole and fell victim to its toothsome inhabitant.

Cash also dismisses the threat of an approaching tropical storm, and although he and his friends are heading into unexplored territory, you’ll know exactly where BLACK WATER: ABYSS is going once they descend underground. The group make their way through tight, narrow rock passages, come out in a pretty awesome subterranean lake–and then the storm surge rushes down and floods the entire system, putting their one way out under several feet of water. Just as they’re getting their heads together to figure out what to do next, one of them is attacked by a large crocodile lurking beneath the surface, and while Traucki keeps the reptile largely unseen for quite some time, it becomes a palpable threat that makes escape even more of an imperative.

The script by Aussie TV veterans Ian John Ridley (credited in the advance publicity as John Ridley, which led one to wonder what the Oscar-winning screenwriter of 12 YEARS A SLAVE was doing on an animal-attack flick) and Sarah Smith comes up with a few reasonably plausible complications to the already desperate situation, and just enough character drama to keep us involved with the couples in between suspense and attack sequences. Traucki builds a mounting sense of claustrophobia and menace, and giving us only fleeting glimpses of the croc adds to the horror: When someone shines a flashlight or headlamp out over or into the murky water, it’s hard not to feel a tingle of suspense, waiting for the beast to make its presence known. His naturalistic approach to building dread is abetted by Damien Beebe’s moody cinematography and the understated score by Michael Lira.

The filmmakers also successfully keep us guessing about who will make it out of this horrible dilemma alive; it’s not obvious who the survivors are going to be, always an achievement in a movie like this. That pays off when the story takes a serious turn in the final act (one that is unfortunately spoiled by the trailer seen below), which is more overwrought than what has gone before but brings BLACK WATER: ABYSS to a pleasing conclusion.