Movie Review: Suspense and terror run out early in “COUNTDOWN”

COUNTDOWN plays like a mediocre remake of a J-horror film that never existed, with a premise that is so five years ago (actually six, when APP was first released). That goes for some of the dialogue, too: “Stop being such a little biyotch!” a teenage girl says when one of her friends expresses concern about downloading Countdown, which puts on your smartphone a down-to-the-second digital clock revealing how long you have to live, cannot be deleted and (horrors!) takes up 60 GB of memory.

Even worse, if your death is impending and you change your plans for that day in an attempt to avoid it, you get a “User agreement broken” message and an ugly demon comes after you. But why wouldn’t Death simply find another way to claim you at your allotted time? If we’ve learned anything from the FINAL DESTINATION films, it’s that Death is a crafty, creative sumbitch. The app treats different victims in different ways, and COUNTDOWN’s inability to establish or follow consistent rules is just one of its problems. Another is that so many of its thrill tactics are as outdated as a landline. There are cheap jump scares, including a few variations on the sudden-hand-on-the-shoulder-but-it’s-just-a-friend gag. There is a character slooooowly approaching a shower curtain and then whipping it away to reveal…nothing. Someone falls for the oldest trick in the supernatural book (is that…actually my dead relative come back to life?), and when a potential victim who believes he’s cheated his fate walks onto a street—well, is it really a spoiler to suggest he should look out for speeding cars? 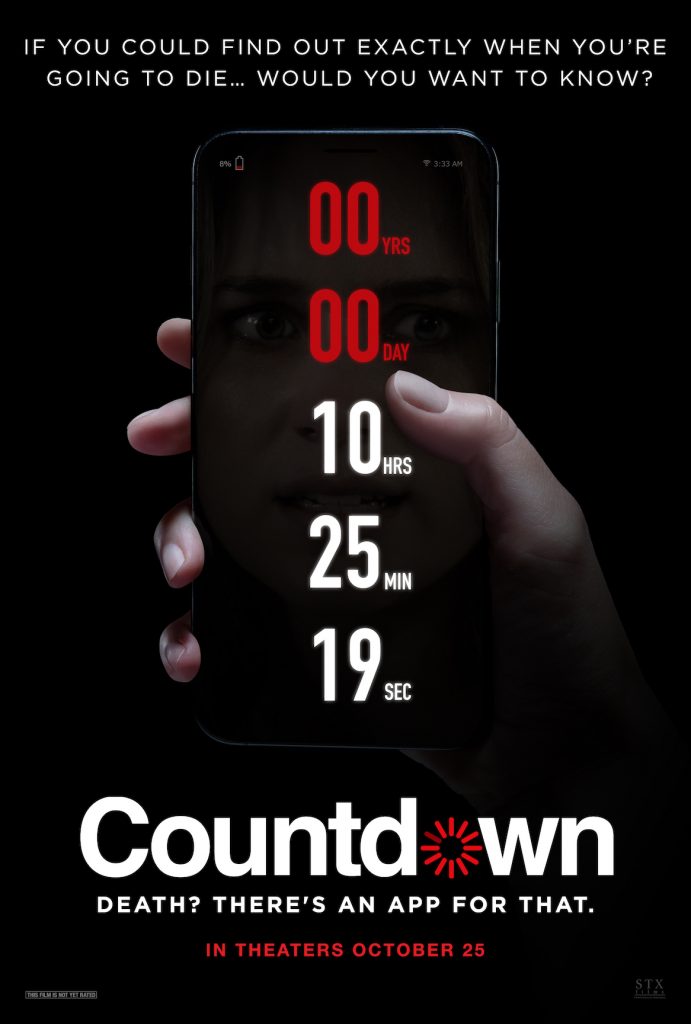 There is an attempt at modern relevance here via a subplot in which heroine Quinn (Elizabeth Lail), a hospital intern who has just made R.N., is sexually harassed by a sleazy doctor (Peter Facinelli)—as if Countdown letting her know she’s going to meet her demise in three days isn’t enough of a worry. This story strand comes off as kinda tacky and out of step with the rest of the film, since writer/director Justin Dec, who has a background in comedy shorts and on-line videos, plays a number of moments and supporting roles in COUNTDOWN for laughs. The latter include Derek (Tom Segura), a smartphone dealer whom Quinn hopes can hack Countdown, and P.J. Byrne as Father John, a hip priest who listens to rap, snacks on communion wafers and attempts a protective ritual whose rules are, of course, ignored at a crucial moment by those whose lives depend on it.

There’s the promise of a provocative idea here: If you knew exactly how long you had left on Earth, what would you do with the time you had left? How about a movie in which someone discovers they have a year to live, and decides that if their demise is predestined and unavoidable, they’re going to let all their inner demons out? COUNTDOWN has no such ambitions, unfortunately, and is content to recycle ideas from other, better films. Dec did hire on some strong genre talents for his team, including Alexandre Aja’s regular cinematographer Maxime Alexandre and the special makeup wizards at KNB EFX, but their skills are squandered in this lackluster vehicle. What a shame that the only wide-release horror film for Halloween will likely be forgotten by the following weekend.