From the opening credits, which play over extreme close-ups of a Galaga game in action while Van Hughes’ Tangerine Dream-esque electronica hums ominously on the soundtrack, it’s clear that SEQUENCE BREAK is a love letter to two different strands of 1980s pop-culture DNA. The filmmaking overall is as heartfelt as the homages, elevating SEQUENCE BREAK above mere fan service.

A Shudder exclusive premiering on the streaming service today, SEQUENCE BREAK was written and directed by Graham Skipper, an actor familiar from numerous recent indie fright flicks and a protégé of Stuart Gordon. He has learned well from his mentor, keeping the focus of this low-budget project tightly trained on a handful of characters enmeshed in some very weird science. Skipper’s BEYOND THE GATES co-star Chase Williamson stars as Oz, a bearded loner who doesn’t even have a cell phone, and is instead devoted to older technology, i.e. the ’80s arcade games he fixes up in a small, cluttered shop. 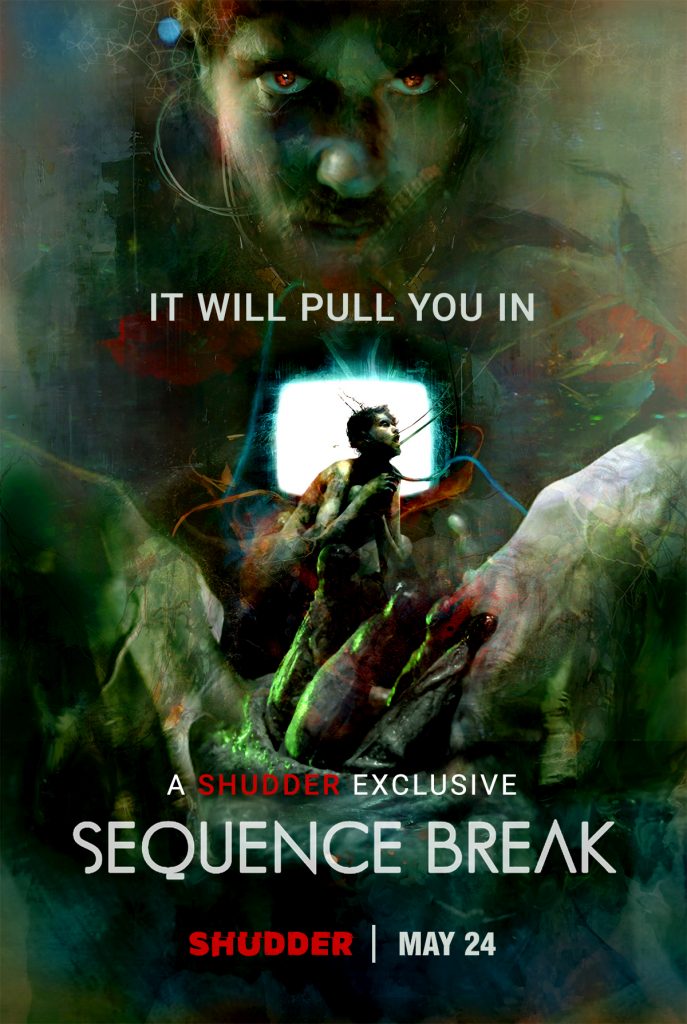 The place is on the verge of closing down due to lack of business, but early in the film it receives a pair of fateful, separate visitors. One is a young woman named Tess (Fabianne Therese from SOUTHBOUND), who takes a shine to Oz, and the other is a vagrant spouting conspiracy gibberish. His first appearance coincides with Oz’s discovery of a strange circuit board that he plugs into an empty console, activating a game whose graphics resemble a cross between Asteroids and Tempest. If you remember those, you might also recall that parents and other concerned adults once thought playing them could damage your mind, and in this case, they were right. The new game immediately starts messing with Oz’s head (and his stomach), threatening his sanity and his burgeoning relationship with Tess.

Clocking in at just around 80 minutes, SEQUENCE BREAK is a simple tale skillfully told, grounding its increasingly trippy and icky visuals in the love story between Oz and Tess. The latter, who at first bids to be a Manic Nerdy Dream Girl (dropping references to INDEPENDENCE DAY and the like), is given thoroughly charming nuances by Therese, who makes it clear Tess’ forwardness with Oz stems from seeing a kindred geek spirit in him. Williamson makes the initially withdrawn Oz likable as well, and you root for the couple to overcome the weird and horrific obstacles you know will be thrown at them—right from their first date, actually, when he starts suffering the hallucinatory mental results of his game play.

The strangeness has a physical side too, as the game mutates courtesy of gifted makeup effects artists Josh and Sierra Russell, who combine the sensual and the technological in a manner akin to VIDEODROME. SEQUENCE BREAK overall, in fact, plays like early David Cronenberg in its study of ordinary people victimized by an infectious human-made threat, and Skipper, with cinematographer Brian Sowell and editor Zach Wiegmann, applies an assured sense of camerawork and cutting. As odd as things get, Skipper maintains control of the material and ties his visual approach to his subject; when his picture divides into split-screen, it feels like the movie is going into two-player mode. As a director, he’s earned a replay with this film.