Movie Review: Sam Raimi returns to superheroes with “DOCTOR STRANGE IN THE MULTIVERSE OF MADNESS”

There will be two kinds of genre audiences going to DOCTOR STRANGE IN THE MULTIVERSE OF MADNESS: MCU fans who saw SPIDER-MAN: NO WAY HOME (i.e. most of the world) and want to see where the franchise goes next with the multiverse idea, and Sam Raimi devotees curious about what the EVIL DEAD master will bring to the biggest of big-ticket filmmaking these days. Both groups should be pleased with this new adventure, though a familiarity with both sets of preceding screen works will add to the enjoyment.

It’s interesting that the presence of Raimi (the first director I can think of whose name is being used to sell a Marvel movie) at the wheel is being seen by some as a game-changer, considering that a) the previous DOCTOR STRANGE was also helmed by a horror specialist, SINISTER and THE BLACK PHONE’s Scott Derrickson, and b) if you count DARKMAN, Raimi has made just as many superhero movies as he has fright flicks. He got the whole enormous ball rolling 20 years ago, of course, with the first SPIDER-MAN, but expectations are different now that he’s stepping into an established factory rather than taking what was seen at the time as something of an expensive risk. 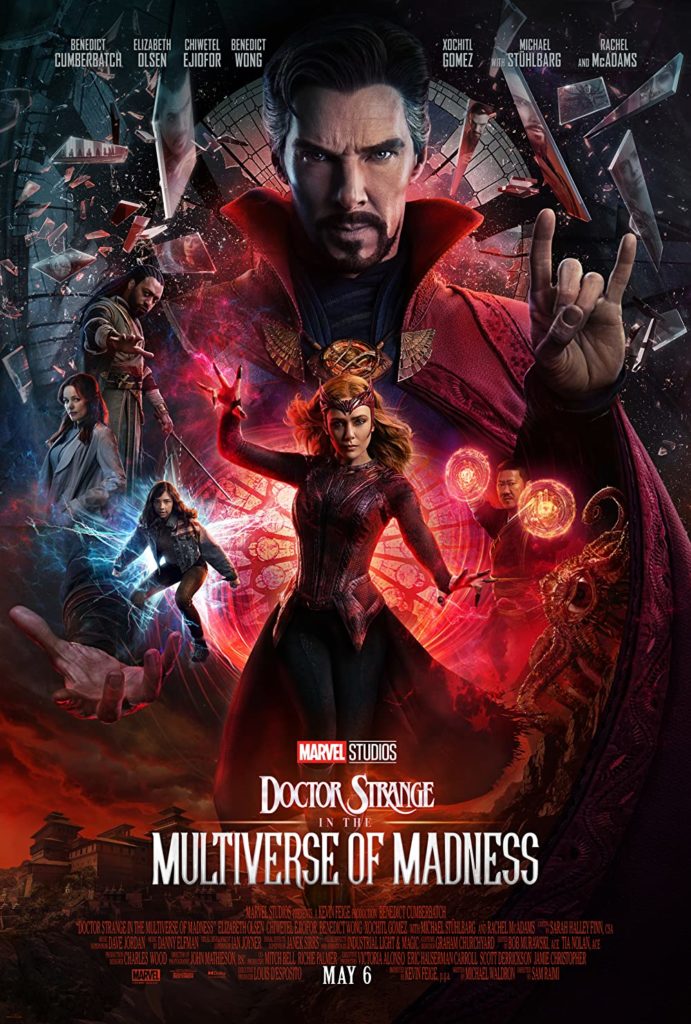 As it turns out, DOCTOR STRANGE IN THE MULTIVERSE OF MADNESS is rather more a Raimi film in content than style. It doesn’t have as distinctive a feeling overall as the anarchic playfulness of Taika Waititi’s THOR: RAGNAROK, or the ’70s-paranoid-thriller homage of Anthony and Joe Russo’s CAPTAIN AMERICA: THE WINTER SOLDIER. (It also doesn’t have a sequence as shivery-freaky as Doctor Octavius’ self-transformation into Doctor Octopus in Raimi’s SPIDER-MAN 2.) What is does have is more monsters and demons invading the MCU than ever before, well-integrated by Raimi and screenwriter Michael Waldron into the ongoing saga of troubled superheroism, headed by Benedict Cumberbatch’s stalwart yet conflicted Doctor Stephen Strange.

The first beast is seen in a prologue pursuing an alternate Strange and a new (to the movies) character, teenage America Chavez (Xochitl Gomez), through a colorful alternate universe. This turns out to be a dream (or is it?) had by our-world Strange (Benedict Cumberbatch), just before he attends a more troubling event: the wedding of his lost love Christine Palmer (Rachel McAdams). The ceremony is interrupted by the arrival outside of a gigantic octopus/crustacean hybrid with one huge eye that goes on a tear through Manhattan’s streets (and bears more than a passing resemblance to THE SUICIDE SQUAD’s Starro the Conqueror–have at it, DC fans!). America is being pursued by this creature too, and in a rousing setpiece of tentacled destruction, she is rescued by Strange and the Sorcerer Supreme Wong (Benedict Wong, gratifyingly given more to do in this movie than in previous films).

Deducing that this rampaging seafood salad was spawned by witchcraft, Strange goes to see Wanda Maximoff, a.k.a. The Scarlet Witch (Elizabeth Olsen), for help, and she becomes a key player in the action to follow. Although Waldron was the creator of the LOKI series, MULTIVERSE OF MADNESS is directly informed by another Marvel show, WANDAVISION, and while we’re given enough of Wanda’s television backstory to comprehend her motivations here, it helps to have seen WANDAVISION to fully respond to the character’s arc. In this film as in her TV showcase, Olsen gives a performance that’s both dynamic and sensitive, and helps carry the narrative as it jaunts through many different universes.

It turns out that America has the ability to jump between these dimensions, though she hasn’t figured out how to control this gift yet, and Gomez brings sympathy and pluck to this burgeoning superhero. Her powers are a good match for Strange’s as they leap from one imaginatively conceived and realized environment to another, attempting to save the multiverse itself from being plunged into chaos. There are epic battles that generate considerable excitement, albeit an excitement that has come to seem familiar after so many trips through the MCU. Fortunately, MULTIVERSE OF MADNESS becomes more horrific as it goes along, and in the final act, Strange himself takes a turn that definitively sets him apart from the way any of the franchise’s heroes have been depicted in the past. Throughout, Raimi takes occasional advantage of opportunities to drop in bursts of surrealism (Strange and America plunging through a series of eye-boggling alternate realms is a knockout) and touches of sneaky humor, along with numerous callbacks to the EVIL DEAD films (SPOILER ALERT: The actor you’ve been hoping to see here does indeed have a funny cameo). His frequent collaborator Danny Elfman graces it all with a varied, involving score, and the music literally comes alive in one of MULTIVERSE OF MADNESS’ most inspired scenes.

If, in the end, DOCTOR STRANGE IN THE MULTIVERSE OF MADNESS is more a Marvel movie than a Raimi joint, it demonstrates once again that the director can comfortably and confidently handle the demands of mega-franchise filmmaking. Marvel mavens, meanwhile, will enjoy the way this installment literally expands the U in MCU, a sequence incorporating a group of new and familiar faces and knowing in-references to past movies and series (like a dialogue callback to one of the best parts of HAWKEYE). As producer Kevin Feige and his huge team continue to play an impressive long game with the Marvel adaptations, here’s hoping Raimi can return on another entry and go even more crazy and dark. Dare they make an R-rated MCU film?