Gaslit on an epic scale, punished for being naturally gifted and conscientious, failed by the very institutions and systems that supposedly exist to protect her…

It’s extremely difficult to immerse oneself in the harrowing fall, rousing rise and righteous–if complicated–vengeance of the reluctant heroine depicted in THE DARK RED without feeling as if her trials aren’t merely a heightened version of the myriad degradations suffered daily by the vulnerable and earnest in our burgeoning, increasingly brutal tech-dystopia. Or, for that matter, that the cult of sociopathic narcissists who cynically wield false kindness and normalcy to earn and then betray her trust isn’t a stand-in for any number of regressive political and cultural forces reaching gale-force status in the world today. That director/co-writer Dan Bush (2008’s THE SIGNAL) and co. are able to so deftly intertwine pathos, empathy, terror and rage in a tightly woven, intensely affecting 100-minute bundle is no small feat. 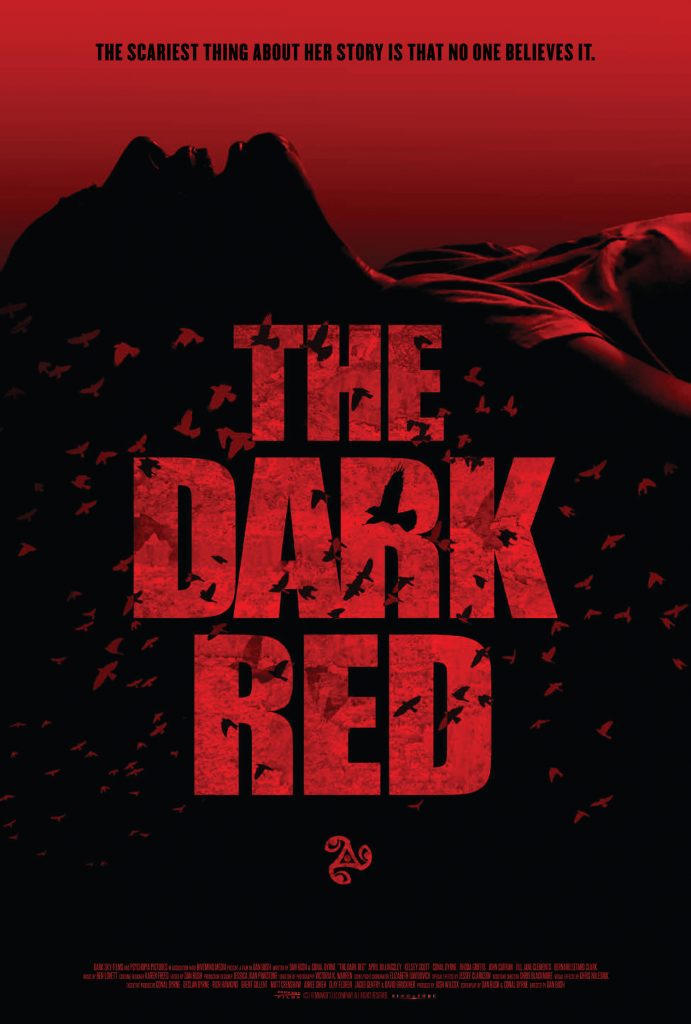 We first meet Sybil Warren (April Billingsley) in a lockdown psych ward, steeping in a pharmaceutical stew. During ensuing sessions with a new psychiatrist, Dr. Deluce (Kelsey Scott), shown to us in selective flashbacks, we learn Sybil’s backstory: The mental telepathy and power to sometimes read minds; a moment of post-traumatic abandon in which she gives herself over to a stranger who seems like kismet personified, sharing herself and her secret; an unexpected pregnancy. And then, to be vague enough to avoid spoilers, there’s the arrival of, in the words of the film’s official synopsis, a “secret society” that steals her newborn in order to “harvest its supernatural blood.”

To say Dr. Deluce is skeptical would be something of an understatement.

“I’m not going to bullshit you,” she tells Sybil. “Most psychoanalysts in my position wouldn’t spend more than 10 minutes on your case. Highly intelligent female. Extreme early childhood trauma. Extensive history of mental illness. Psychotic delusions. Lost her mother and then her baby in the same year. Committed by her own doctor because she claims her baby was taken by an invisible cult because of her ancient bloodline and superhuman ability to read minds.”

Well, when you put it that way…

The doc’s diagnosis? Schizophrenia. We are left, alongside Sybil, to grapple with what is real. Once finally set free, Sybil chooses to bet on herself and goes down the rabbit hole one more time. And we are only too happy to follow her, invested and anxious to know the truth as well. What follows is an equally frightening and enlivening denouement, brilliantly executed.

Billingsley, an alum of THE WALKING DEAD currently seen in THE OUTSIDER, is flat-out fantastic in THE DARK RED, showing incredible range, breaking your heart even as she gets your fist pumping in the air. Her scenes with the likewise great Scott (FEAR THE WALKING DEAD: PASSAGE) fairly smolder. The primary cultists—Conal Byrne (also the movie’s co-writer), Rhoda Griffis, John Curran—are appropriately charismatic and terrifying.

Finally, Bush is, to his great credit, fully willing to wrestle with the thorny philosophical issues, ambiguities and monsters he unleashes here. THE DARK RED is beautiful in both its audacity and sincerity. By the time the credits roll, you may find yourself hoping that the film finds a wide audience as fervently as you pray its richly developed characters find peace. Because if Sybil can fight her way to peace and recompense—to autonomy and ownership of her unique gifts—maybe there’s a way forward for the rest of us.