Movie Review: Occult terrors claw through the façade of everyday life in “DEMENTER”

Such are the dark and profound questions writer/director Chad Crawford Kinkle engages in his affecting, harrowing, reality-refracting second feature. In fact, DEMENTER feels like a further-down-the-rabbit-hole companion piece to Kinkle’s much-lauded 2013 debut JUG FACE, about a pregnant teenager trying to escape her backwoods community, whose members want to sacrifice her to a creature in a pit.

Yeah, DEMENTER is an experience, all right… 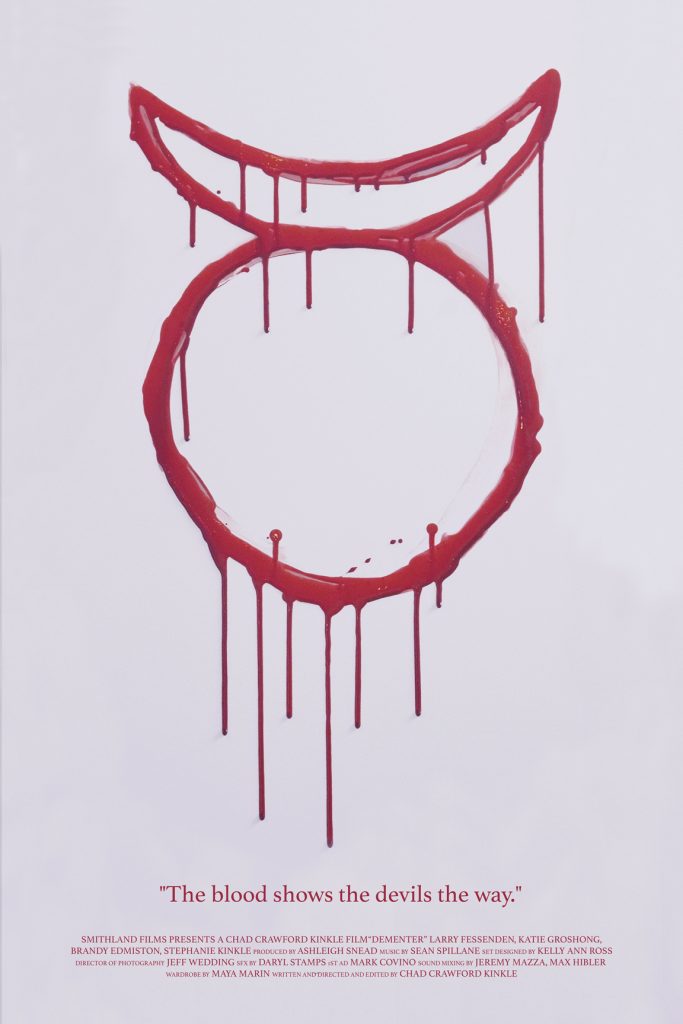 After a portentously disorienting series of sinister images interspersed with opening credits written in childlike crayon scrawl, we are plunged, cinema vérité-style, into the middle of a woman’s interview for a position at an agency that helps those with disabilities lead safe and productive lives. “I just really would like a job where I could feel like I was doing something good,” Katie (Katie Groshong) tells her potential employer—and that, along with a promise that she’s enough of an insomniac not to fall asleep on overnight shifts, is enough to land her the gig. From here, we are introduced to a cast of developmentally disabled individuals who embody not only a purity of focus and being, but also a real vulnerability.

This, for Katie, seems to trigger both a kind of nurturing, protective instinct as well as a serious anxiety. The source of the latter soon becomes clear—well, semi-clear—through a series of flashbacks of her time in an occult cult helmed by an enigmatic backwoods druid with the deceptively chill name Larry (Larry Fessenden). Even before we see the strange symbols branded into her back, we realize she has been forced to physically and psychologically plumb some true depths; that she has seen a depravity and foulness that brings the goodness, innocence and susceptibility to evil into starker relief.

This soon becomes important for two intertwining reason: First, Katie is having terrifying visions and/or waking nightmares that suggest she has not put quite as much distance between herself and her former life as she presumed. And second, one of her clients, a woman with Down syndrome named Stephanie (the filmmaker’s real-life sister Stephanie Kinkle), is ill in a way that baffles her other caretakers and doctors, but which Katie suspects may be a sign of a nefarious, otherworldly malady. To give it a name, “the devils.” To protect Stephanie, Katie now feels compelled to dip into her notebook of ritual invocations and undertake increasingly drastic sacrificial measures. All of which puts her on a collision course with her present normies and the malevolent, vengeful ghosts of her past.

It’s a chilling journey—simultaneously more grounded in reality than JUG FACE and far, far more bizarre and discomfiting when it slips into the darkness. (It’s probably worth noting for the unfamiliar that both Groshong and Fessenden, who give extraordinarily naturalistic performances here, were in JUG FACE as well.) These narrative and aesthetic schisms are powerful and effective, keeping viewers off kilter in a way that is uncomfortable, yes, but also strangely enlightening.

DEMENTER establishes beyond the shadow of a doubt that JUG FACE was no fluke: Kinkle is an idiosyncratic, provocative, nimble filmmaker who eschews simple answers, and with every frame might as well be whispering in your ear: The only way out is through…