Movie Review: Netflix’s “THE SILENCE” is a not-very-scary place

As anyone who’s read the comments sections of previous on-line coverage of THE SILENCE will know, this is not a knockoff of A QUIET PLACE. It’s based on a Tim Lebbon novel first published in 2015, and was in the works before John Krasinski’s chiller, which has a very similar premise, became a sleeper smash last year. (The fact that screenwriters Carey and Shane Van Dyke’s previous credits include Asylum “mockbusters” like THE DAY THE EARTH STOPPED, PARANORMAL ENTITY and TRANSMORPHERS: FALL OF MAN is therefore an amusing coincidence rather than incriminatory evidence.) So, THE SILENCE is guilty not of being an imitation of A QUIET PLACE, but of telling a comparable story not nearly as well. 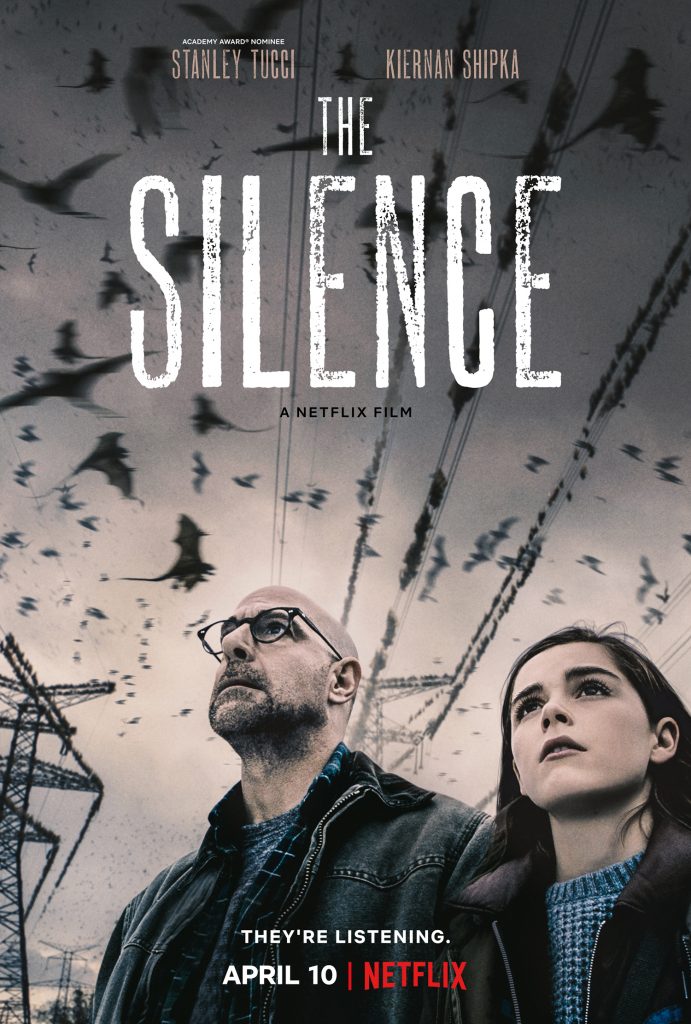 Even if the comparison isn’t entirely fair, scene after scene in THE SILENCE makes you realize just how much more well-thought-through A QUIET PLACE was in developing its premise. Instead of keeping the focus on the relationships among its threatened family and tightening the screws, THE SILENCE goes off on digressions that are familiar from other films and TV series, like STAKE LAND and THE WALKING DEAD. The movie also has an extremely on-the-nose way of introducing its central characters. When we meet deaf teenager Ally Andrews (Kiernan Shipka), some high-school bullies are mocking her; Ally’s suburban mom Kelly (Miranda Otto) is first seen with, no kidding, soccer balls falling out of her car. When dad Hugh (Stanley Tucci) tells young son Jude (Kyle Breitkopf) about a time his best friend Glenn (John Corbett) defended him in high school, Jude says, “I wish I was that brave,” and Hugh replies, “I have a feeling you might be.” Oy.

All the Andrews’ bravery will be tested after the world is invaded by carnivorous flying creatures that have mutated deep in a Pennsylvania cave system (though it’s not explained what they fed on down there). Blind and highly sensitive to sound, they are dubbed “vesps” and resemble smaller relatives of the critters in PITCH BLACK—yet another movie that did a similar theme better. They’re unleashed in a found-footage prologue, followed by a KOYAANISQATSI-style opening-credits montage of completely random images, and then their attack on the New York/New Jersey area sends the Andrewses fleeing north. The family’s survival depends on them staying silent, but not too silent; numerous scenes have them walking through the woods and otherwise moving around without attracting the monsters’ attention. (At a couple of points, the noises people make are apparently covered up by the music on the soundtrack.)

The Andrewses are also able to safely talk with each other in hushed tones, and thus sign language isn’t necessary to their communication, which means that Ally’s deafness has pretty much no bearing on the narrative. (She can speak clearly because she only lost her hearing three years before in a car accident that killed her grandparents—a tragedy that also otherwise has no importance here.) Instead, they hole up in a remote farmhouse and play out a few scenarios seen in the undead-apocalypse opuses mentioned above and many others like them. There is one clever sequence late in the movie involving weaponized cell phones, a bright spot of creativity in a plot that is otherwise as underdeveloped as the characters.

Director John R. Leonetti, not improving on a résumé that also includes ANNABELLE and WISH UPON, contributes generic atmosphere and a steady but unexciting pace, reverts to slow motion for scenes that would probably have been more dramatic at regular speed and muffs what should have been a great hero moment involving Hugh and a woodchipper. Never mind specific comparisons—THE SILENCE simply isn’t scary, gripping or believable enough on its own terms. The final implausibility—SPOILER ALERT—is Ally’s closing narration telling us that humanity’s survival rests on the vesps not liking the cold—rather unlikely for a species that bred in caverns deep beneath the Earth’s surface.