Movie Review: Murder and much more in “THE LIMEHOUSE GOLEM”

With its opening scene of a 19th-century drag performer introducing us to the story of the Limehouse Golem, and the great swell of Johan Söderqvist’s (LET THE RIGHT ONE IN) music behind the main title, it’s clear that THE LIMEHOUSE GOLEM intends to be a ripping yarn in the great British tradition. While that approach leans more toward melodrama than horror, it’s rich and lush enough to be enjoyed by anyone with a taste for full-blooded decadence.

The script by THE WOMAN IN BLACK’s Jane Goldman is based on Peter Ackroyd’s book DAN LENO AND THE LIMEHOUSE GOLEM, which in turn was inspired by the real-life Ratcliff Highway murders, which predated Jack the Ripper’s slayings by over 70 years (and are also referenced in Alan Moore’s FROM HELL). The movie places its mayhem just prior to the Ripper’s rampage, in 1880, when Inspector John Kildare is called to London to investigate the slaughter of a family. Scotland Yard is baffled, and while Kildare, who’s never looked into a murder before, believes he’s being set up as the fall guy in an unsolvable case (there’s no discernable rhyme or reason to the Golem’s choice of victims), he nonetheless puts his full deductive powers to work. 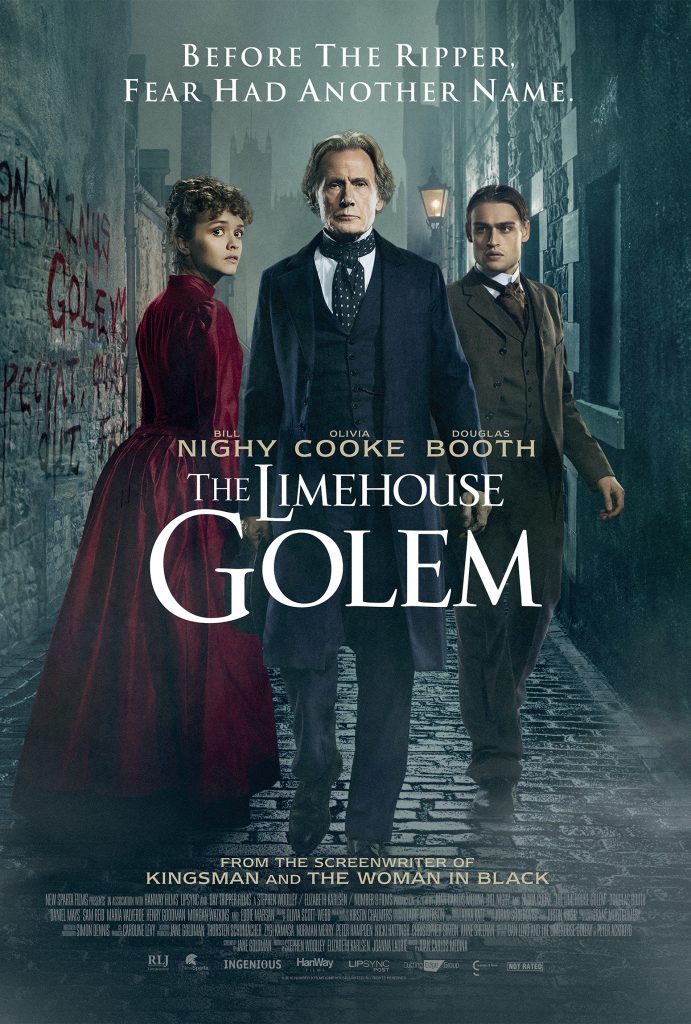 If you’re casting a British detective with fierce intelligence, a core of sensitivity and the occasional wry sense of humor, there couldn’t be anyone as qualified as Nighy. (Well, perhaps the late Alan Rickman, who originally had this role but had to bow out due to his illness; THE LIMEHOUSE GOLEM is dedicated to him.) He provides a compelling center even as Goldman’s screenplay spins out into frequent flashbacks, cued to the trial of music hall actress Elizabeth (Olivia Cooke from BATES MOTEL). She’s accused of poisoning her husband John (Sam Reid), and Kildare comes to believe that her plight is tied to the Golem’s killing spree. As he learns about her past, we see it play out in lengthy scenes detailing her rise to stage success with the help of the flamboyant Dan Leno (Douglas Booth), the actor in the aforementioned drag.

Visualizations of prior events are key to Goldman and director Juan Carlos Medina’s storytelling, as we also witness Kildare’s imaginings of the gory crimes being committed by assorted suspects. There are just enough of these, which go whole hog with the gore (solid prosthetics work by Davy Jones), to keep genre fans intrigued, and any viewer can get easily caught up in the breathlessly paced intrigue. Medina, whose previous feature was the similarly time-hopping, more fantasy-tinged PAINLESS, keeps the dual narratives running smoothly and drenches them in mood, with strong assist by cinematographer Simon Dennis and production designer Grant Montgomery.

He and Goldman also keep a number of thematic balls in the air, touching on politics, class, religion and homosexuality, with a wide ensemble mixing fictional with a few real-life characters (among the latter are Leno and none other than Karl Marx). They’re enacted by a credible and colorful cast that also includes Daniel Mays as a good-natured constable who serves as Kildare’s assistant and sounding board, Eddie Marsan as a stage manager with a secret or two and Maria Valverde as a vampy actress who doesn’t appreciate Elizabeth stealing her spotlight. They all have their moments, and if this means that the eponymous fiend’s exploits are only a small part of THE LIMEHOUSE GOLEM, it ensures that the movie holds your attention throughout.